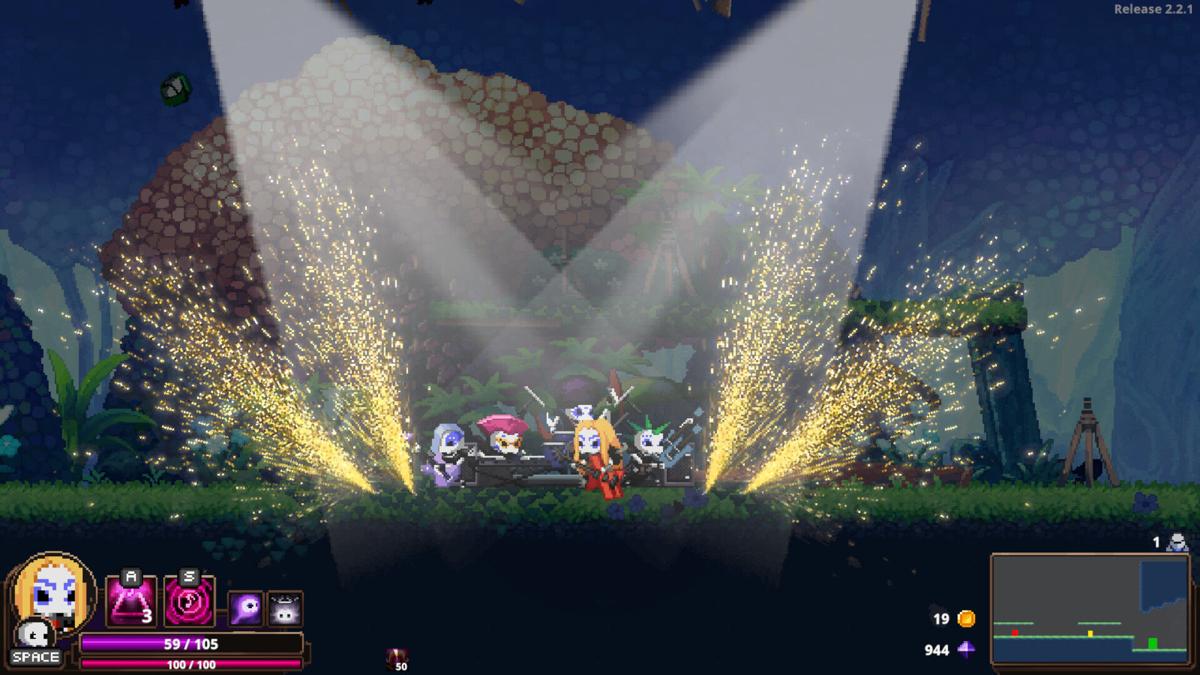 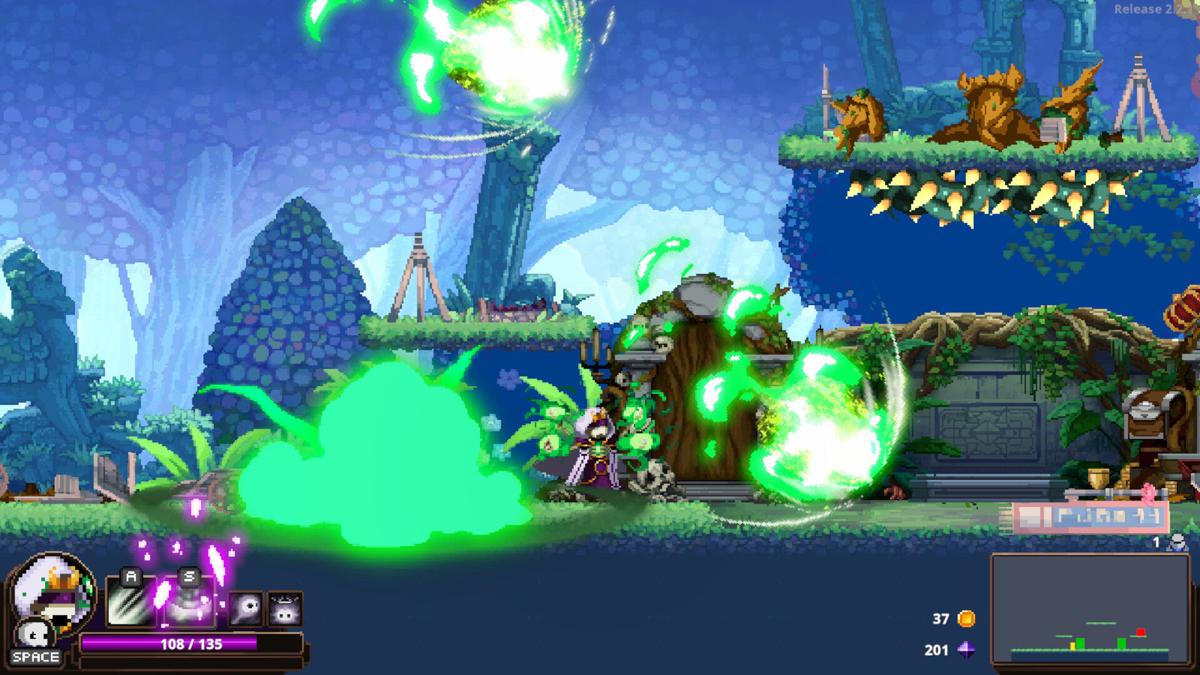 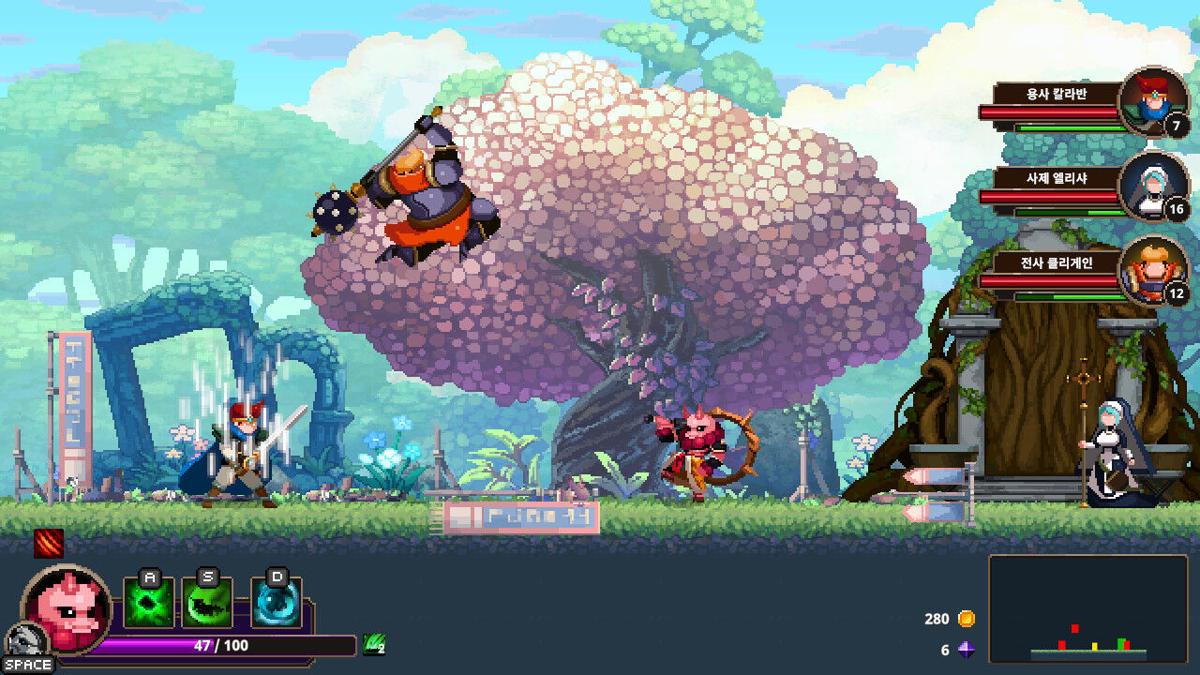 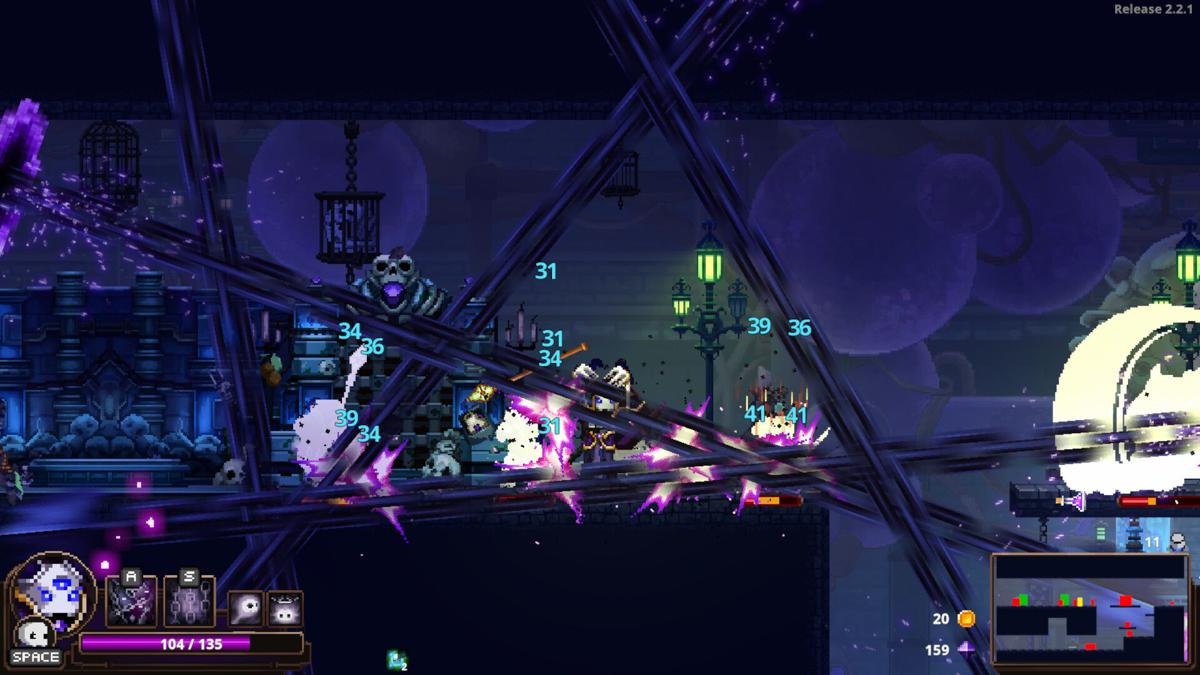 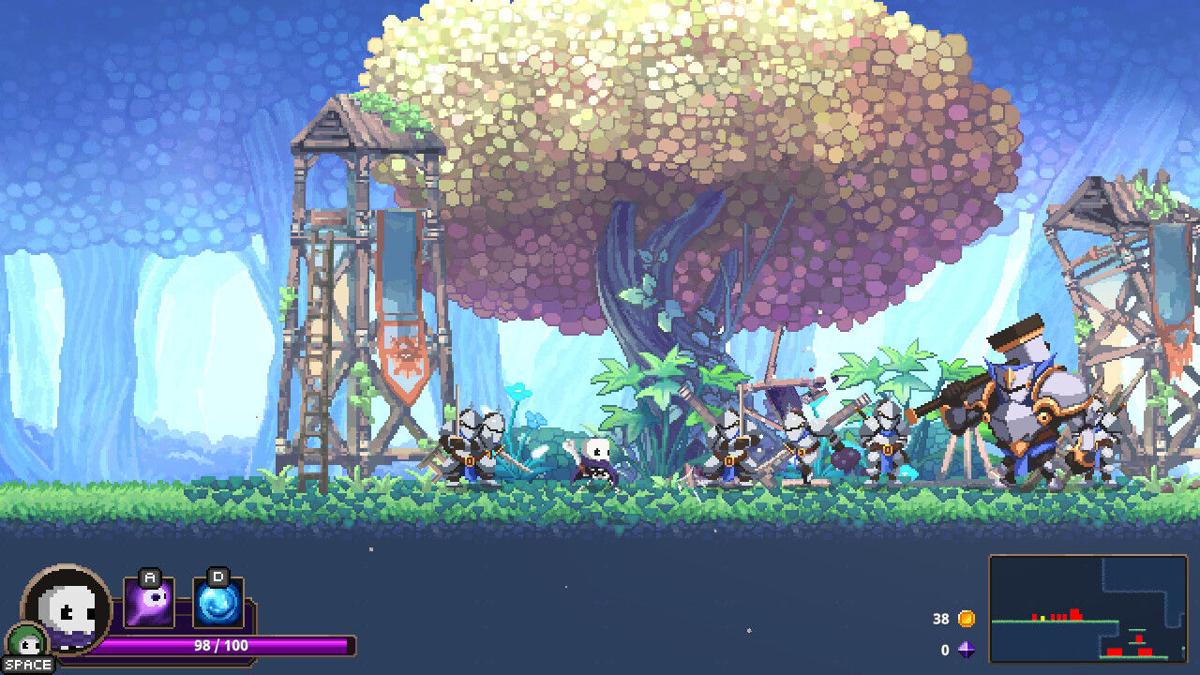 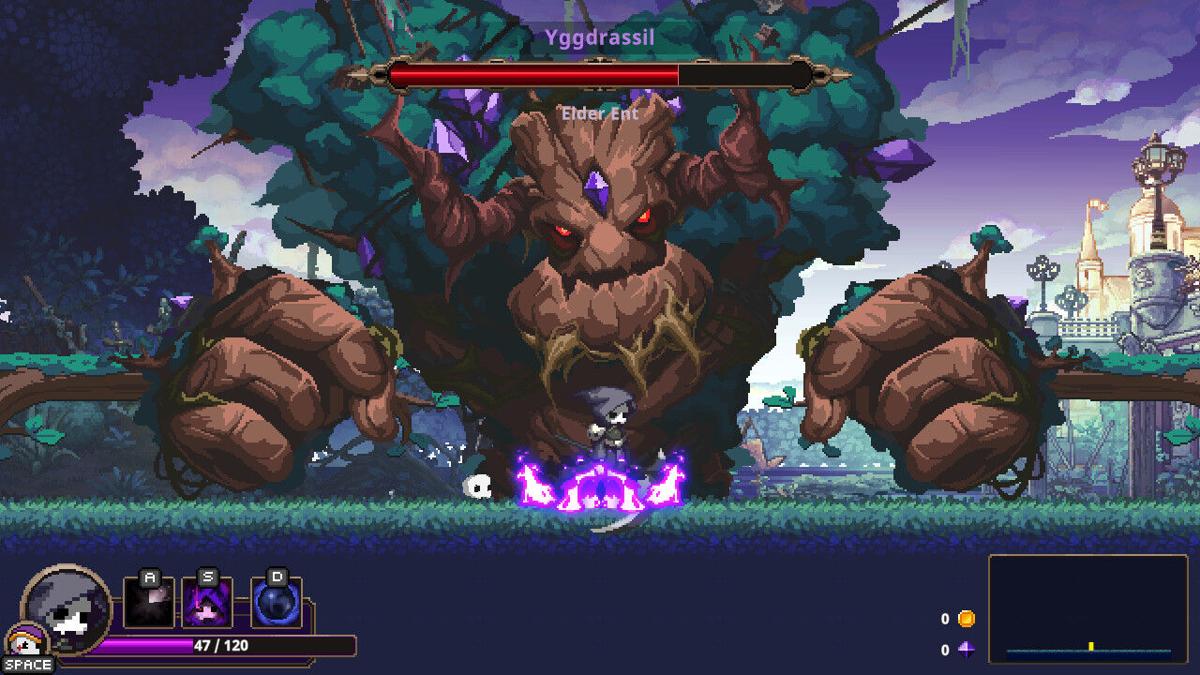 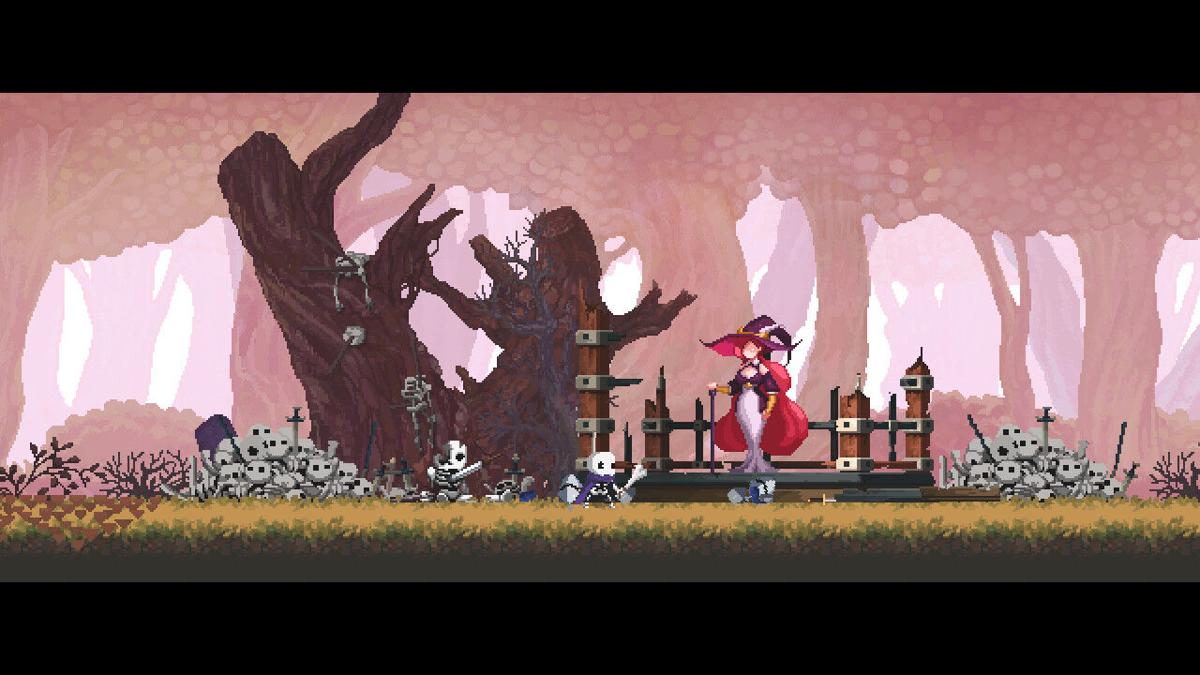 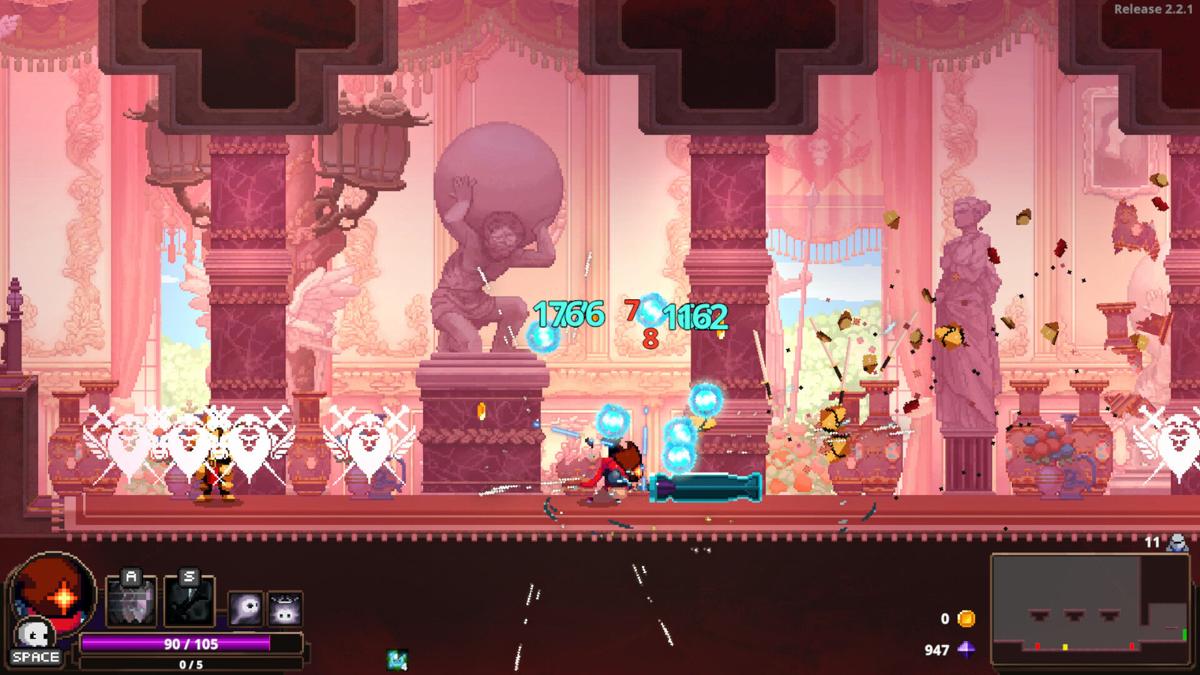 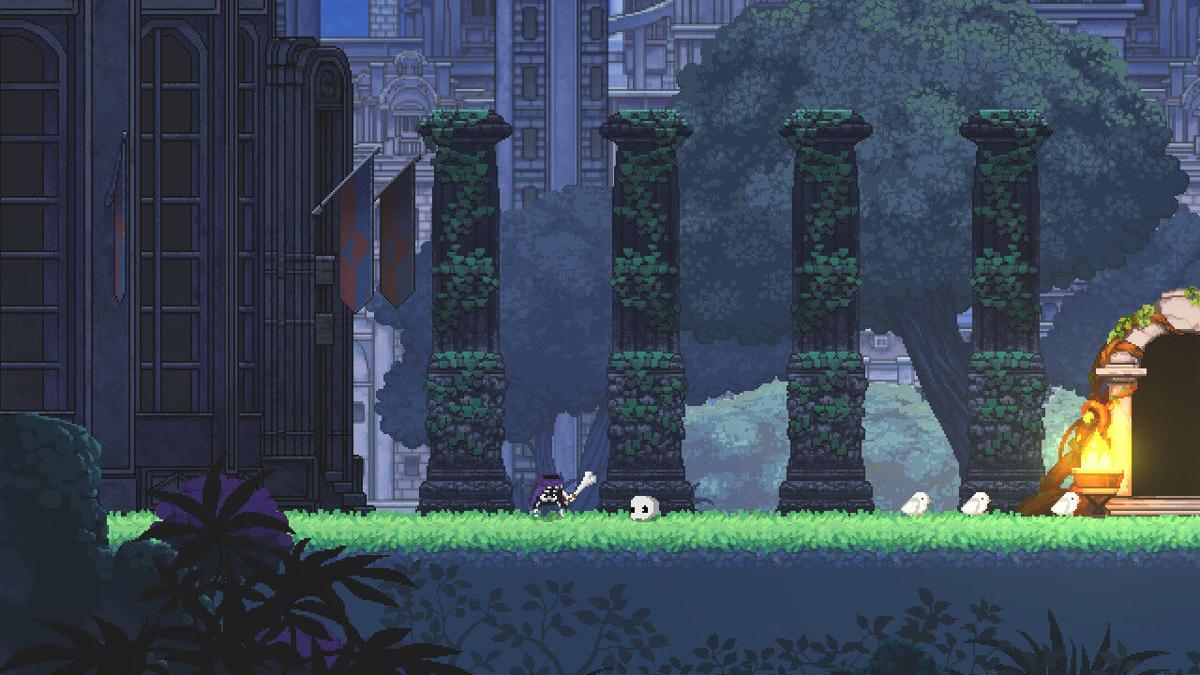 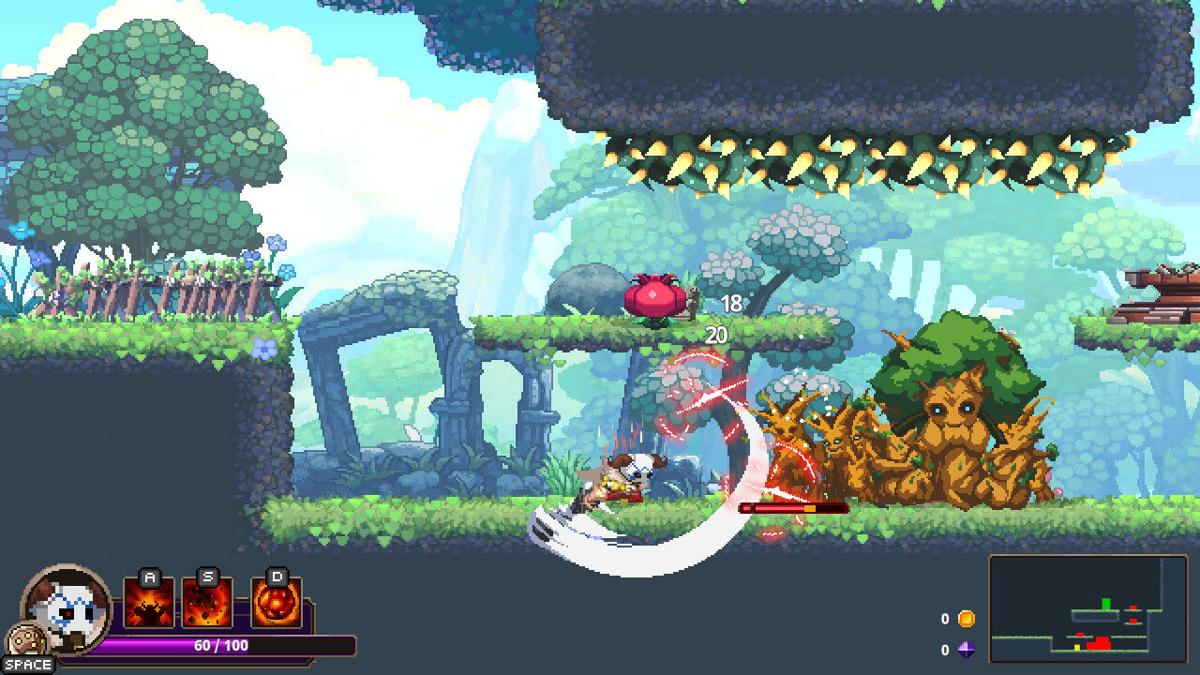 I never really played many rogue-lite type games before discovering “Hades.” After getting the true ending, which required me to beat final boss Hades 10 times, I have been searching for another game in the genre.

I’ve found that in “Skul: The Hero Slayer,” a 2-D, retro-style rogue-lite with a pretty clever means to mix and match power-ups.

From what I can gather, Skul, a pint-size, adorable, re-animated skeleton sets out to save his king (one who appears quite evil) and will defeat any soldier, tree creature or hero that dares to impede his progress. Initially, poor little Skul, is quite inept. He can hit enemies with a feeble bone weapon or throw his own head around as a default, long-distance attack. Sure, he can run around (hilariously) and fight without his disembodied head and can even teleport to its last location, but at the onset, the skeleton fighter can’t compete with the hordes of heroes hunting him down.

Fortunately, power-ups start appearing shortly into Skul’s adventure. Most of these come in the form of skulls that the anti-hero can place upon his head after abandoning the former skull. Each of these skulls grant Skul new powers, which usually makes killing foes much, much easier. In all, the game boasts 100 skulls to collect, which have various strengths, limits, statistics and seem to play independently of each other.

For instance, I acquired the werewolf skull relatively soon into my time with the game. This melee-type class allowed me to slash apart my adversaries and leap to and fro with reckless abandon. However, after decimating loads of heroes, I found myself struggling to reach the giant tree boss at the end of the level.

My next run, I took the mantle of the alchemist, a more long-distance, magic based skull and I literally walked through the first two levels with no trouble. I’d just walk around with my staff and dish out my default magic attack to the swarms before me. If things got too hairy, I’d throw about three or four poison bombs and clear the field. The alchemist skull has become one of the ones I consistently look for in my playthroughs, just because I enjoy the play style.

After clearing a level or zone, players are sometimes given a choice between two doors. Soon, I figured out that the green doors with skulls around them would garner more skulls. If you drop a head or don’t want one, you can destroy heads and get bones. At certain parts of the game, you can then use bones to awaken skulls making them more powerful and effective. For example, I managed to collect enough bones to transform my simple alchemist into a grand alchemist after his awakening.

And skulls might resemble each other at times, but all feel as though they have special properties. An illustration, after grabbing the melee-oriented ghoul head, I wondered why my character kept growing bigger and bigger on the screen. The ghoul uses skills that have a chance of leaving flesh chunks afterwards, which he consumes automatically, growing bigger and stronger.

Sure, it all sounds gross, but the retro graphics and cute sprite design really helps add some flare and humor to the entire experience. That helps especially since the difficultly really ramps up the longer you last. This game is far from easy, but I’ve enjoyed every minute of it, even if certain bosses tend to cheat me out of victories time and time again.

After dying, which will happen many, many times, players can upgrade permanent statistics such as melee and magic power and eventually unlock that much needed resurrection power back in town. Along the way, more abilities and boons appear like in other rogue-lites. Each changes the manner of how the game plays, which keeps playing through fresh and entertaining.

Eventually, players will come across enhanced skulls. At one point, I remember growing extremely excited about picking up the great warlock. By holding down a button, he can unleash massive, stage-clearing spells. So, for a while, I thought I’d found the best head in the game. That is until Skul became a rockstar. Not only did the rockstar skull run around strumming his guitar and cut through minions with an electric slide, he also put on full concerts. See, if players strum their guitar long enough Skul summons his band buddies to perform a concert with the sparks and everything to the dismay of anyone unfortunate enough to wander into its wake. Sure, the large selection of skulls tempts me, but now, when I see the rockstar, that’s a necessity.

Overall, “Skul: The Hero Slayer” continues to impress me and I am nowhere near finished with the retro rogue-lite. I am happy to say I’ve found something else like “Hades” which is different enough that I can invest in, and hopefully, finish one day. I’ll get there eventually, just have to collect more skulls. Of course, a little luck wouldn’t hurt.