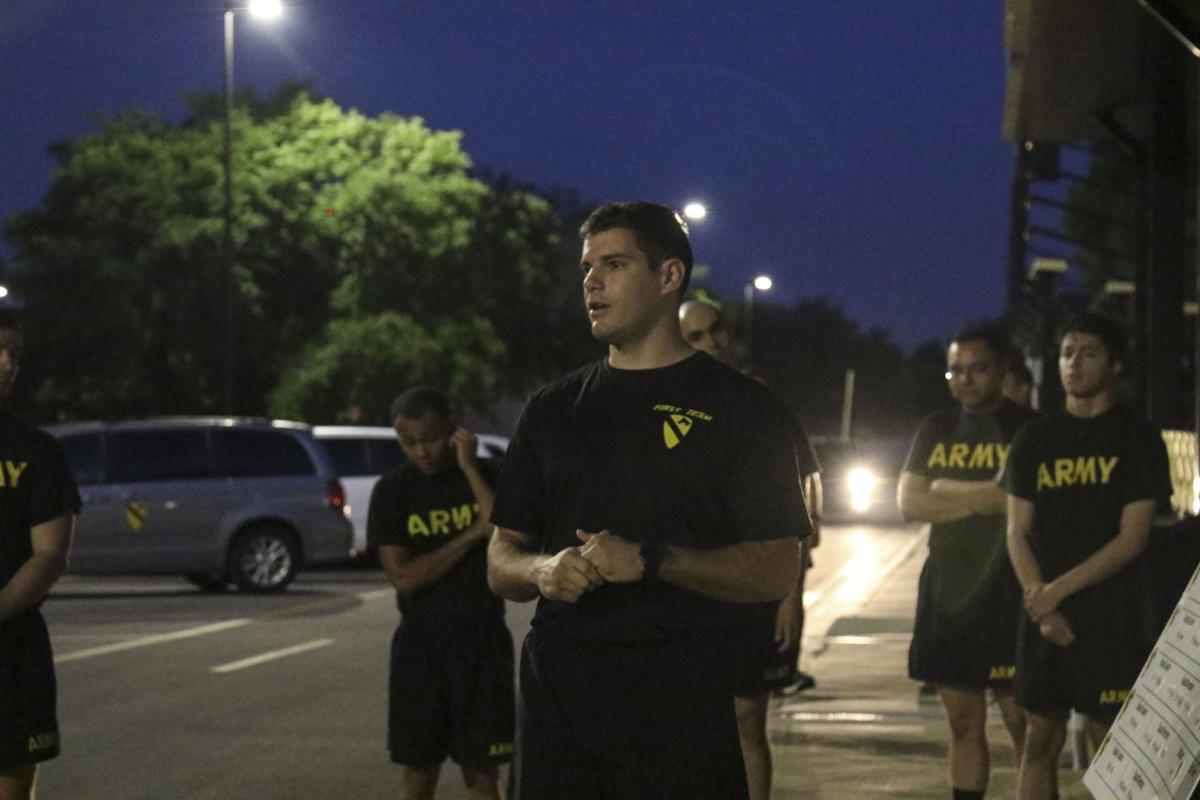 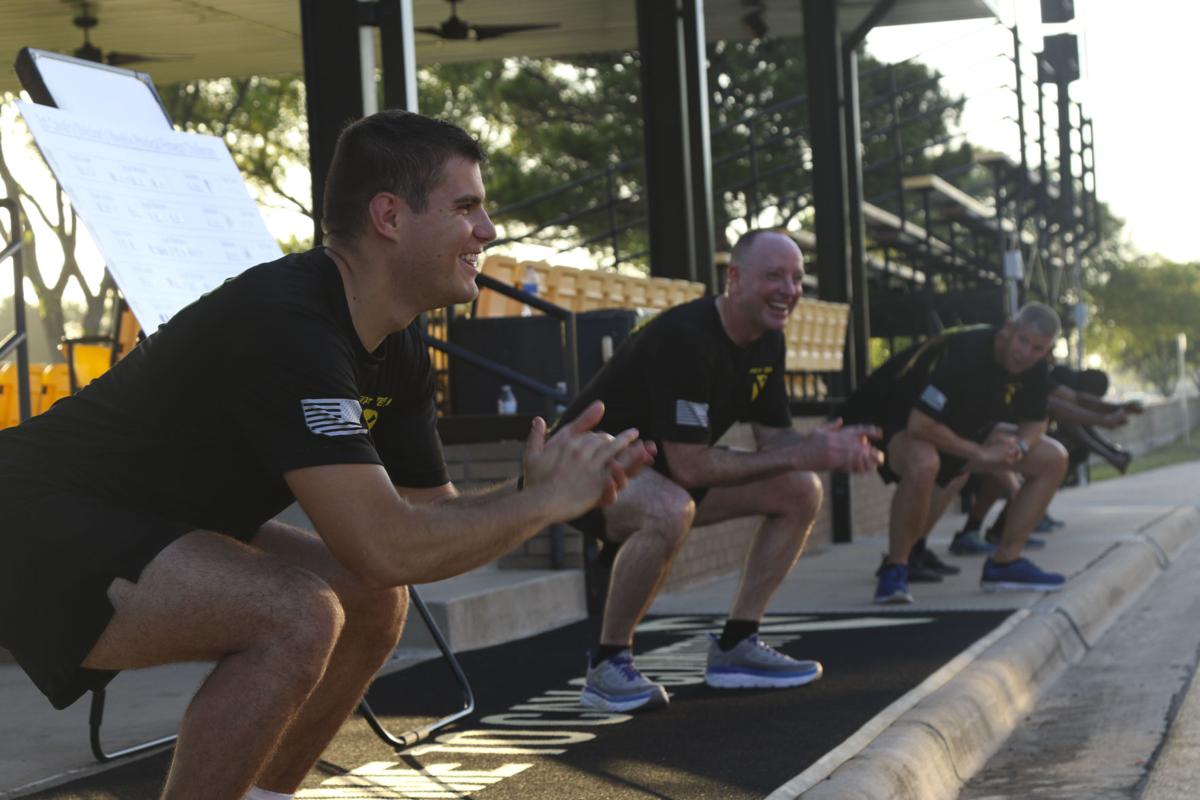 Sgt. Conner Owens, Command Sgt. Maj. Thomas Kenny, and Maj. Gen. Jeffery Broadwater participate in a squat cool-down after the 5-mile competition. This has become a tradition during this weekly event, featuring the song "Flower" by Moby.

Sgt. Conner Owens, Command Sgt. Maj. Thomas Kenny, and Maj. Gen. Jeffery Broadwater participate in a squat cool-down after the 5-mile competition. This has become a tradition during this weekly event, featuring the song "Flower" by Moby.

Even the sun was still peacefully sleeping when 1st Cavalry Division Soldiers took to the streets in search of “gold.”

As they took off down the road eager to compete against their peers, one Soldier stood watching, beaming with pride.

Sgt. Conner Owens smiled as he watched his idea come to fruition.

“When the COVID-19 pandemic forced us all to work from home, the sergeant major grew concerned that Soldiers would not be doing as much physical training,” Owens explained. “So I had the idea of having Soldiers come to him and doing PT.”

Many junior Soldiers are reluctant to bring new ideas to the table for fear that the rank on their chest doesn’t carry enough weight for them to be taken seriously.

Harnessing both the competitive nature of the brigades and the concern for accountability, the division-wide physical training challenge was born.

One squad from each of the six brigades compete, in a particular event. The winning squad receives a coin and bragging rights.

“It started with Soldiers getting coins at first,” Owens said. “But we’ve now changed it to them getting certificates of achievement.”

Calling it a challenge is an appropriate way to describe this event, as it took a lot of hard work to put together. Luckily, Owens was up to the task.

The planning process started with deciding on a target audience, which then drove the type and frequency of the event. The route was mapped out in an effort to ensure the squads would pass a majority of the brigades. Coordinating with the brigades and disseminating the information about the challenge is what drove this event.

In just a few short weeks, the challenge has grown beyond what anyone initially expected.

“It was amazing when we first did it,” Command Sgt. Maj. Thomas Kenny, the senior enlisted advisor for 1st Cav. Div., said. “Leaders showed up with their Soldiers and ran the competition with them, and those squads went back and told their other unit members about how to represent their brigade.”

The challenge has included running 5 miles in the fastest time, with the squad average being the total time.

“We started out with the five miles because it’s a good measure of fitness,” Kenny said. “The Army standard is two miles, so we figured to make it a challenge, we’d make them do a little more than the minimum required.”

With COVID-19 safety measures in mind, the competition will soon include other events that relate to the Army’s new combat fitness test.

The challenge is picking up steam and gaining momentum, meanwhile, the father of this brain child has made an indelible impression on his leadership and the division by speaking up and being heard.

“He’s a very physically fit guy who likes to challenge people,” Staff Sgt. Joshua Ezzo, protocol noncommissioned officer in charge, who also serves as Owens’ first line supervisor, said. “He’s all about competition and has always been a forward thinker, so this is in keeping with the kind of Soldier he’s shown me to be.”

In an organization like the Army where a lot is based on hierarchy and rank, getting ideas higher can be challenging, but not impossible.

“Sgt. Owens is a self-starting NCO, who embodies the NCO Creed, so it’s easy to listen to the ideas that he brings,” Kenny said. “I encourage every Soldier in the division to share their ideas and help make this the best assignment of their career. Locations don’t make great assignments – people, like Sgt. Owens, do.”