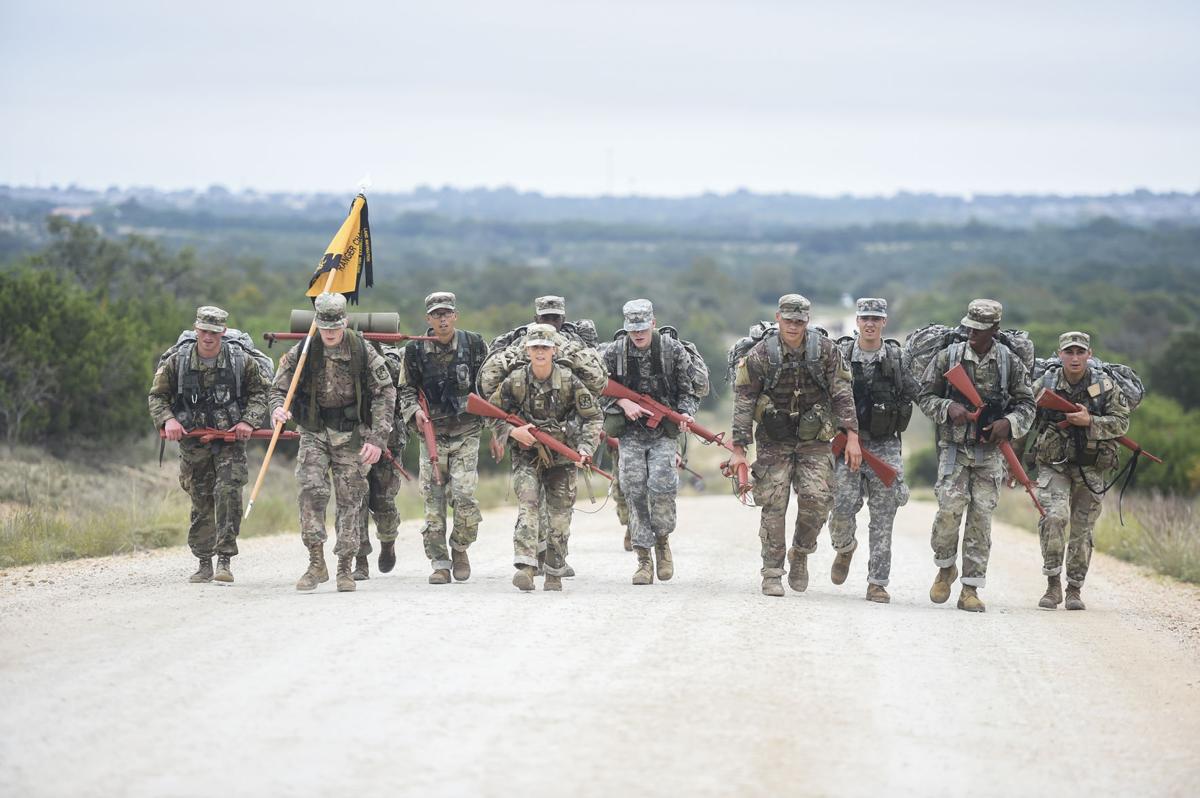 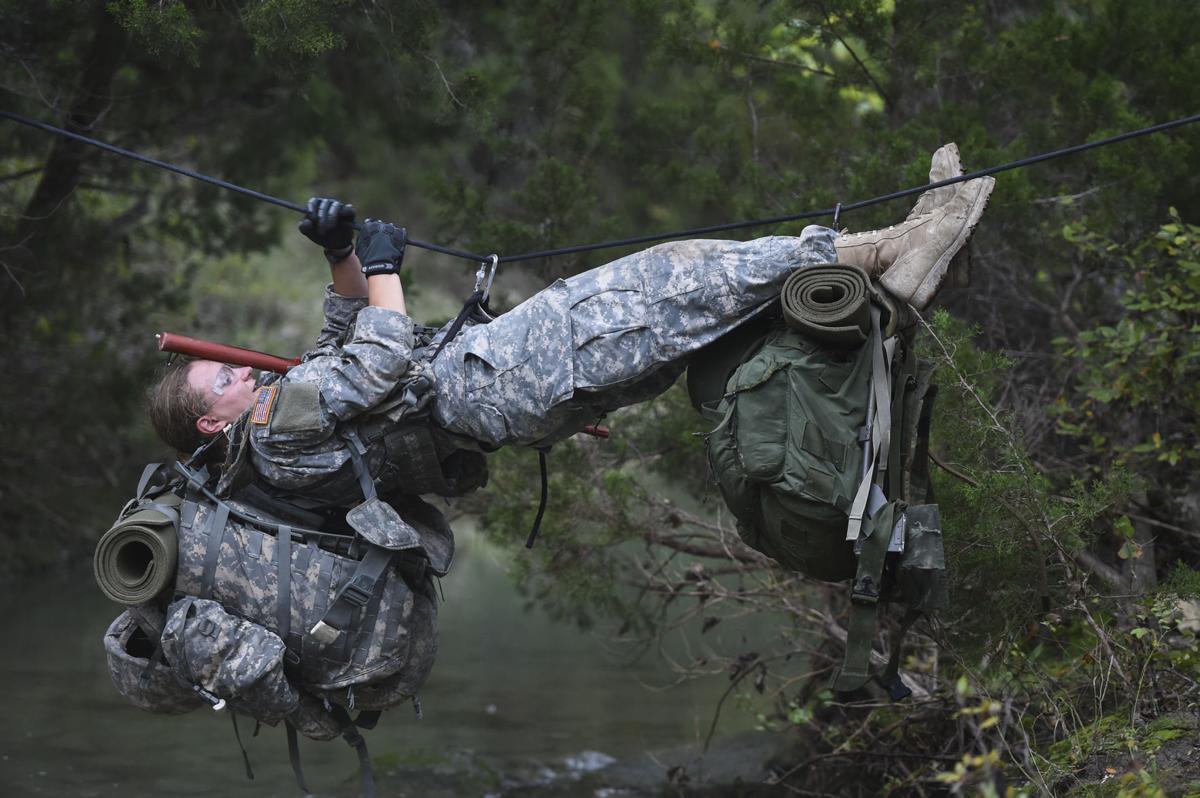 Allie Dalle, a sophomore ROTC cadet from University of Mary Hardin-Baylor, crosses a one-rope bridge over a creek using a carabiner and a “swiss seat” harness during the ROTC Ranger Challenge Saturday. 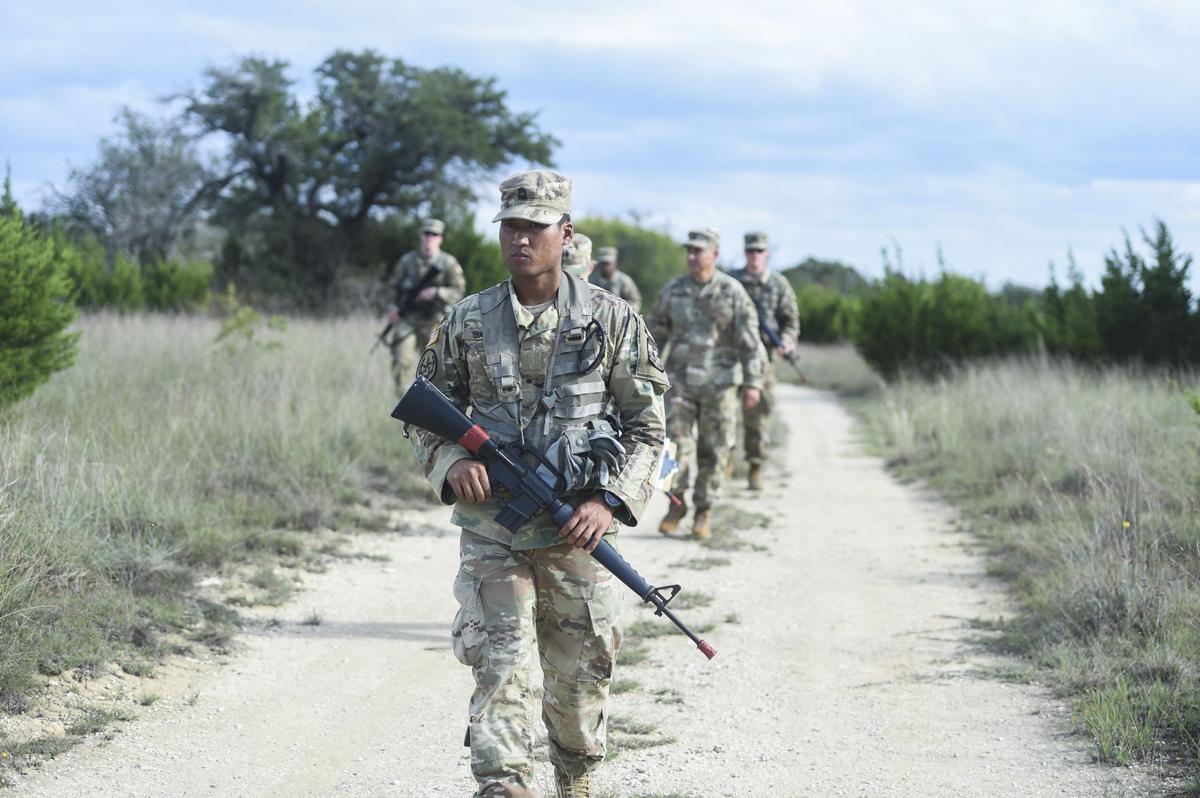 Sokret Sathit, a senior ROTC cadet from University of Texas - Arlington, leads a patrol through the IED-detection lane of the ROTC Ranger Challenge Saturday afternoon. 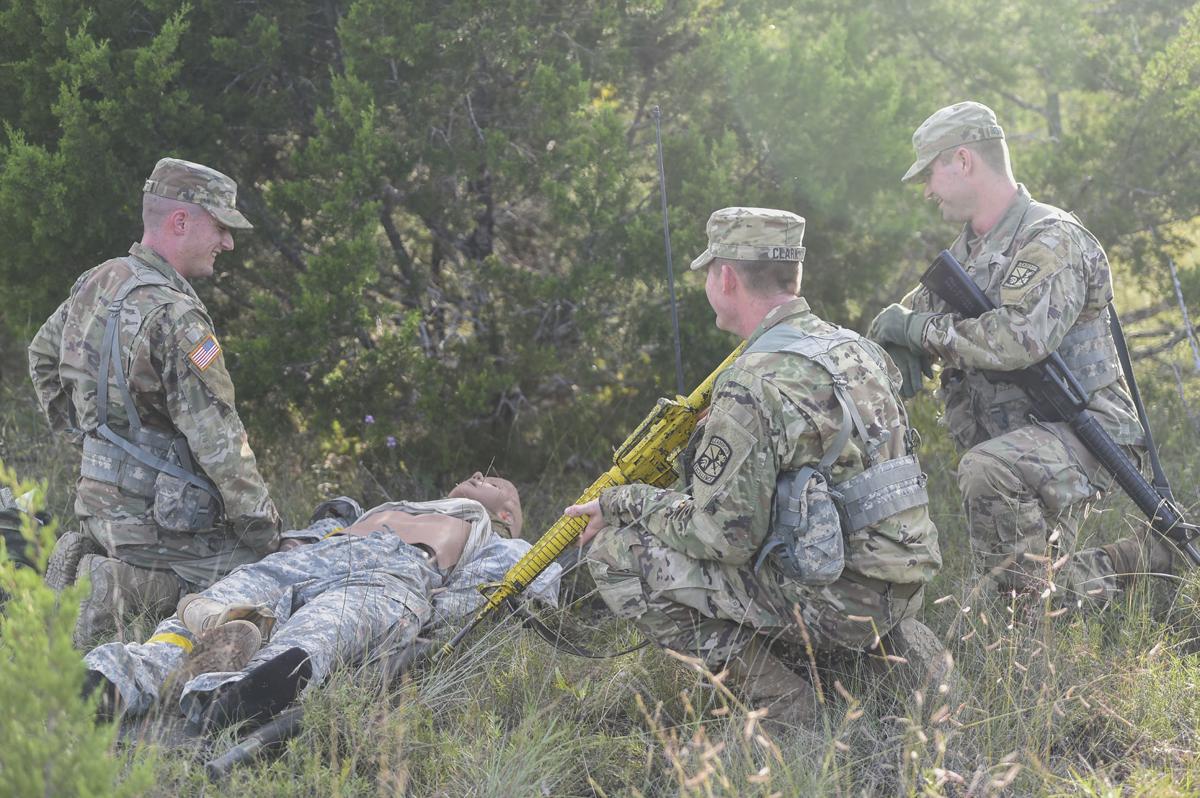 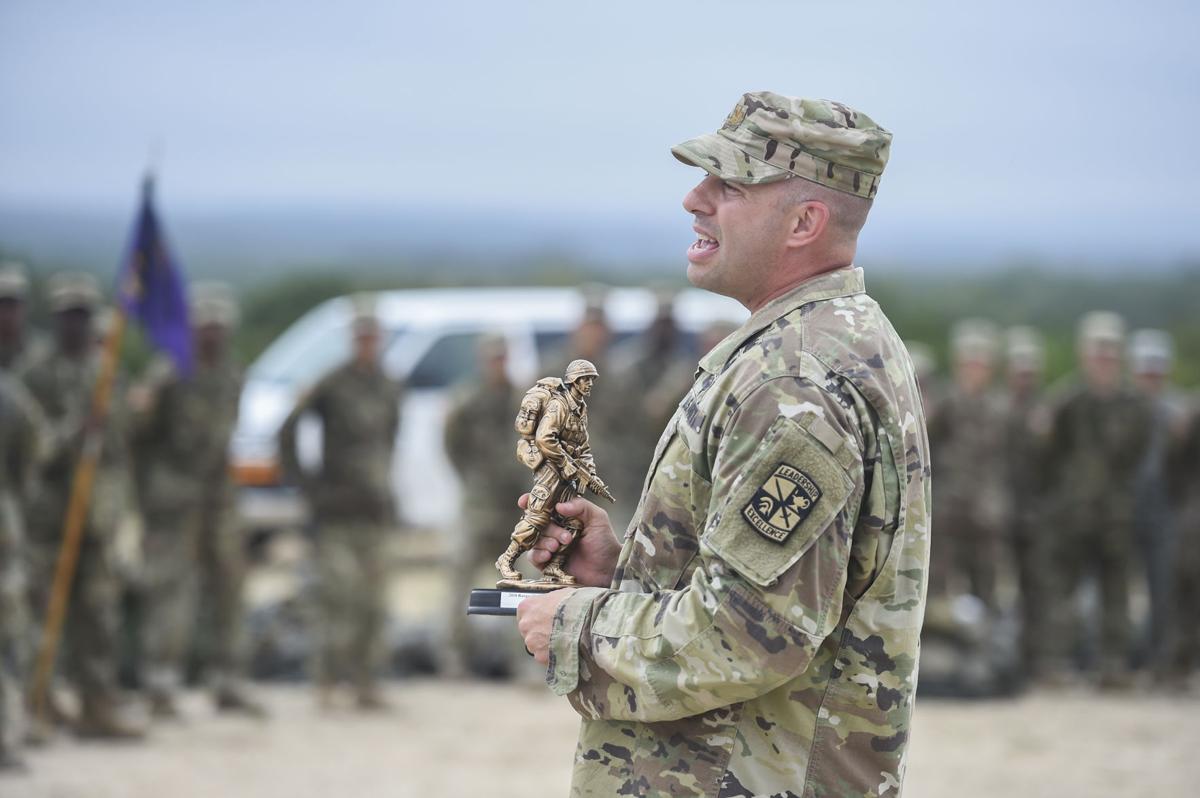 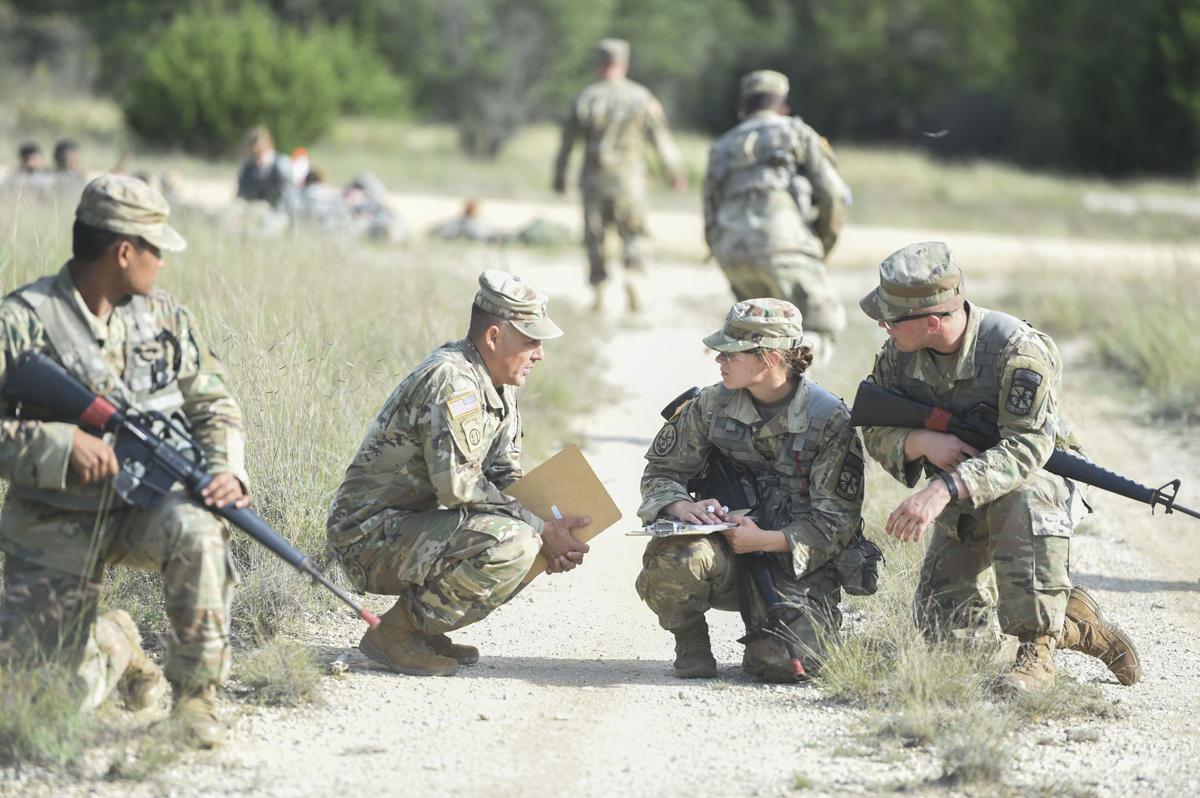 Emily LaFrance, a senior ROTC cadet from University of Texas - Arlington, receives guidance from an ROTC instructor during the UTA team’s run-through of the IED-detection lane of the ROTC Ranger Challenge Saturday in Training Area 75. 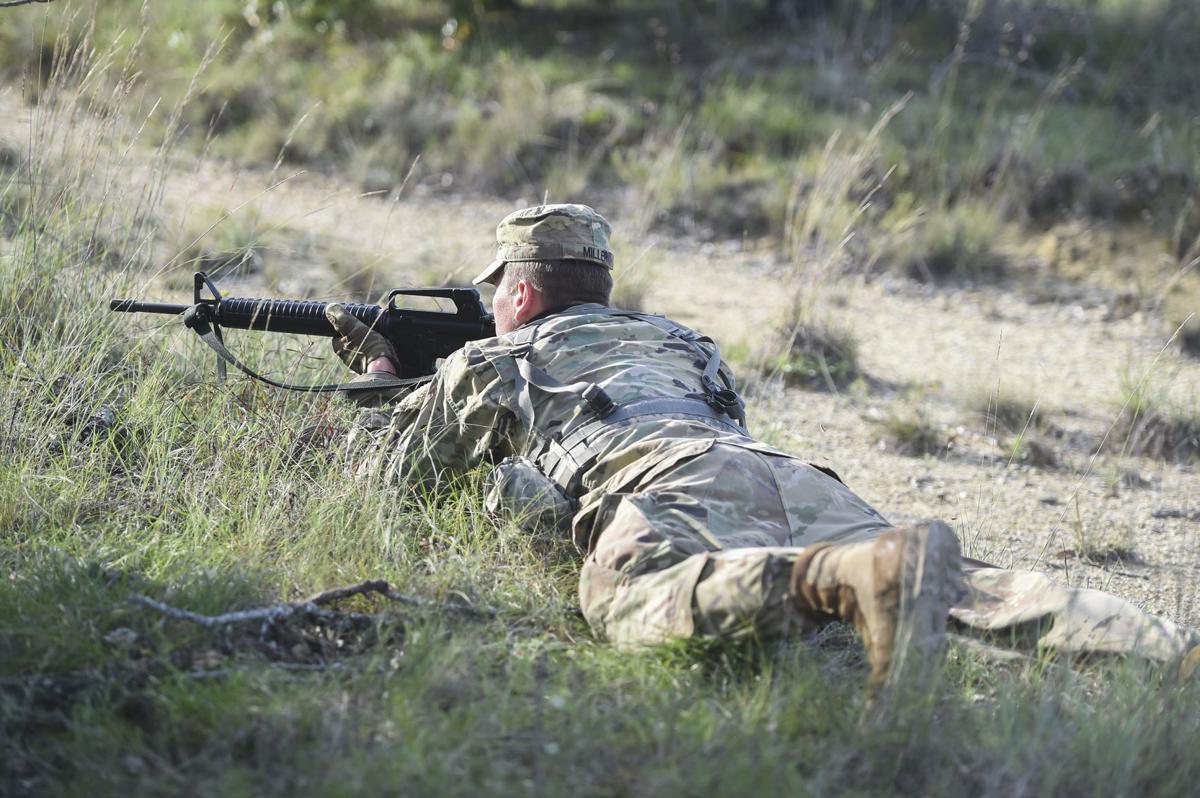 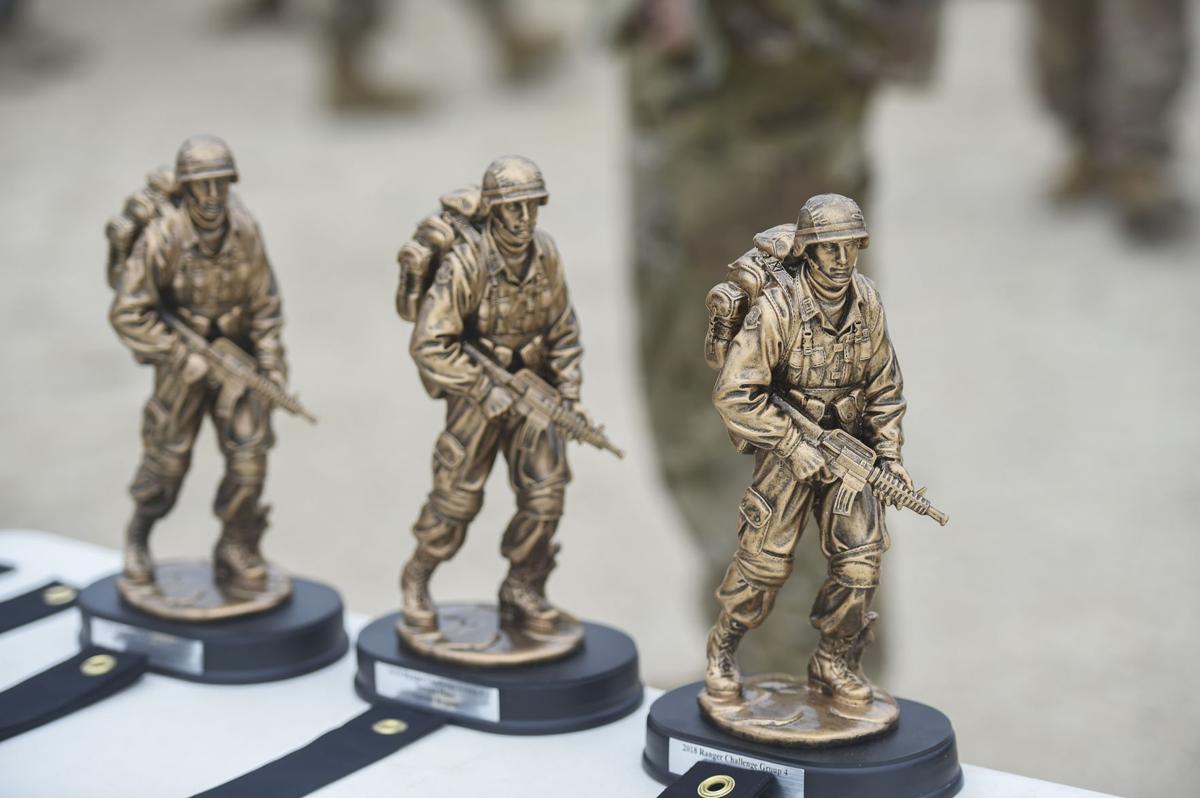 The top three teams received a trophy commemorating their win at the competition.

Allie Dalle, a sophomore ROTC cadet from University of Mary Hardin-Baylor, crosses a one-rope bridge over a creek using a carabiner and a “swiss seat” harness during the ROTC Ranger Challenge Saturday.

Sokret Sathit, a senior ROTC cadet from University of Texas - Arlington, leads a patrol through the IED-detection lane of the ROTC Ranger Challenge Saturday afternoon.

Emily LaFrance, a senior ROTC cadet from University of Texas - Arlington, receives guidance from an ROTC instructor during the UTA team’s run-through of the IED-detection lane of the ROTC Ranger Challenge Saturday in Training Area 75.

The top three teams received a trophy commemorating their win at the competition.

The Ranger Challenge Tab is the only individual qualification tab awarded exclusively to ROTC cadets. The tab is awarded to cadets who compete in regional ROTC Ranger Challenge competitions. The winners of regional competitions then move onto brigade-level competitions, hosted by the eight brigades of the U.S. Army Cadet Command. The brigade-level winning teams then compete in the annual Sandhurst Military Skills Competition hosted by the United States Military Academy at West Point, New York, which includes teams from West Point, the U.S. Naval and Air Force academies, eight ROTC squads and several teams from foreign military academies including Great Britain, Australia, Canada, Afghanistan and Chile.

From last Friday through Sunday, the 129 cadets from nine universities spent three days putting their Soldiering skills to the test on Fort Hood’s Training Area 74 and 75, which is located near the University of Texas A&M - Central Texas campus south of Killeen. There were a total of 13 teams completing the challenge, with a few of the larger ROTC programs fielding more than one team. One of the teams participating in this year’s challenge wasn’t able to meet the personnel requirements to be eligible to compete, but wanted the experience of the challenge anyway, said Maj. Jay Bradley, professor of military science at Tarleton State University and the event organizer. Of 13 teams in the field, only 12 would be scored in the 10 events of the challenge.

Friday started with a call for fire trainer session at the facility on Fort Hood. The cadets finished the first day of the competition with a night land navigation mission.

On Day 2, Saturday, the teams began their day with the Army modified physical fitness test before breaking out into the round robin skills events set up around the training areas. During the round robin skills events, teams competed for the best times in events like the one-rope bridge, IED-detection lane, communication lane, hand grenade assault course, weapons assembly and tactical combat casualty care.

On the final day, Sunday, the Ranger Challenge culminated in a 10-mile road ruck march for the teams before the scores were tallied up and awards were presented.

“They’re doing exceptionally well,” Bradley said of the cadets in this year’s Ranger Challenge. “If they falter in one event, they’ve gathered up their stamina to continue on and focus on the next event, so nobody’s given up. Every event leads to the opportunity for them to be able to seize the lead. I think there’s active competition going on and they’re motivated.”

The Ranger Challenge, while it is a voluntary extracurricular activity for the cadets, is very beneficial to the future Army leaders, Bradley said.

“It provides them a better understanding of tactical requirements that will make them successful at the cadet summer training, Advance Camp,” he said. “It gives them more in-depth experience regarding tactics, operations, understanding the Ranger handbook, which is really a guiding document for our cadets, especially when they go to Advance Camp where they’re assessed on their ability to operate in a tactical environment.”

He continued, “It also exposes them to a more strenuous training event. Typically, in ROTC, you have college students so we slowly ramp them up where this is very intense three-day training cycle for them where they’re assessed and graded, so it makes them expand their band of excellence and their comfort zone.”

Benjamin Kenneaster, a junior at University of Mary Hardin-Baylor and a cadet captain in its ROTC program, has competed in three Ranger Challenges at Fort Hood. While leading his squad through the IED-detection lane, the cadet captain said the most invaluable skills learned are patience and communication.

Angelique Pinard, a sophomore ROTC cadet from Texas Christian University, expected the intense physical activity of the challenge and hoped that it would improve her mental agility and tactical proficiency, making her a better future officer.

For ROTC cadets, training can be both physically demanding and emotionally draining because in addition to their ROTC commitments, cadets have to manage a heavy academic course load and many also hold part-time jobs. Those that volunteer for their Ranger Challenge teams take it one step further.

“They come out here because they love it and they know they’re getting a lot of leadership development,” Bradley said. “I did this as a cadet and I remember it fondly. I know its ability to further develop their leadership attributes. It plays a tremendous advantage when they go to Advance Camp. It clearly distinguishes them above their peers that don’t ever volunteer to undergo this additional complex training set.”

Despite failing to complete the night land navigation event on time and earning a zero score for it, by Sunday afternoon, the Tarleton State University Team 1 redeemed itself, winning the 2018 ROTC Ranger Challenge at Fort Hood with a total score of 149. The TSU 1 team will compete against other regional winners in the 5th Bde. ROTC Ranger Challenge sometime in the upcoming months. The 5th Bde. includes Texas, Arkansas, Oklahoma, Wyoming, Utah, Colorado, Arizona and New Mexico.

Teams who finished in first place for each individual event of the challenge were presented with streamers to add to their ROTC battalion guidons.

The TSU 2 team finished second overall with a score of 142. Baylor finished third with 141.