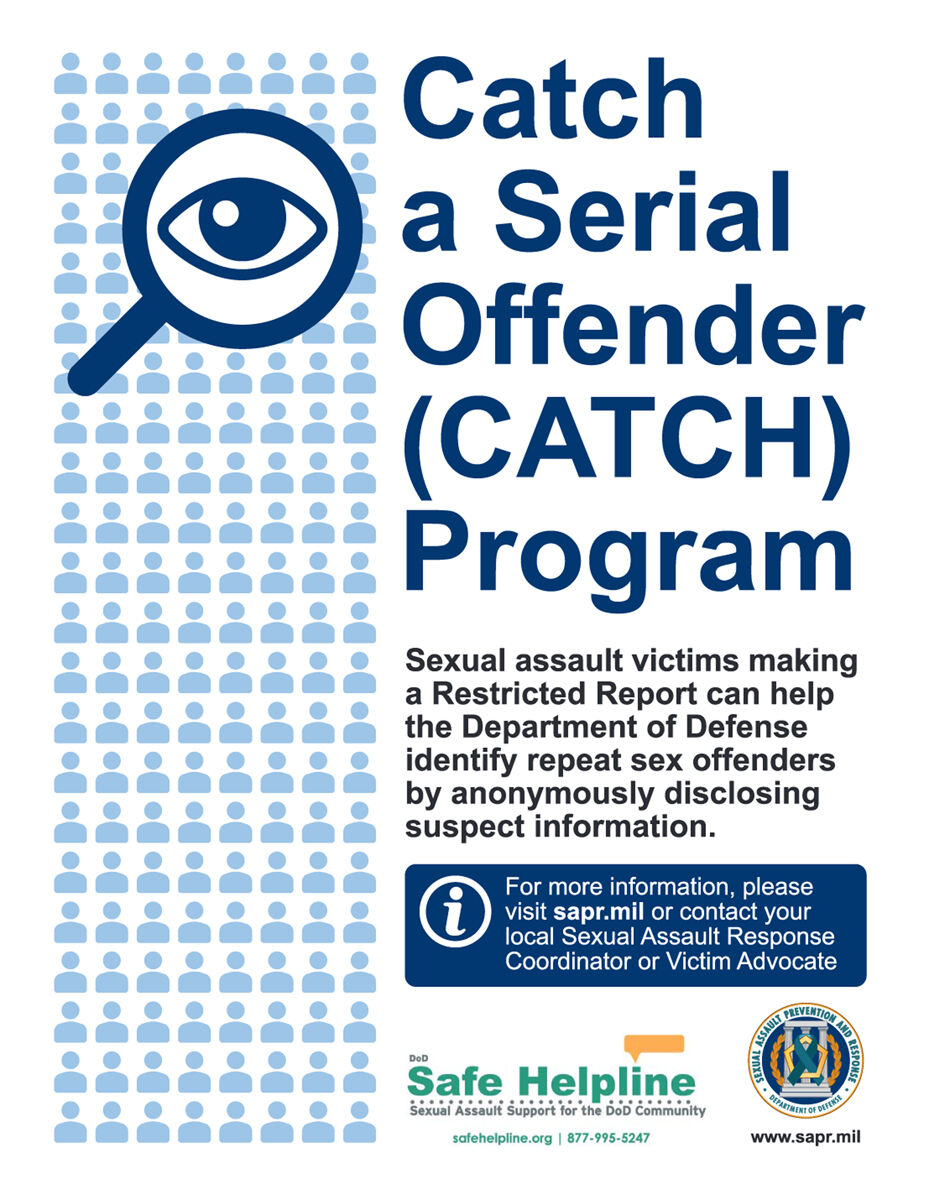 Hoping to catch serial sexual assault offenders, the Department of Defense organized the CATCH program a year ago to support the Army’s Sexual Harassment/Assault Response and Prevention program.

The computer-based program is used to identify repeat offenders, even when a victim chooses to make a restricted report, 1st Lt. Brandy McGinnis, the III Corps and Fort Hood SHARP program victim advocate, explained. The program is designed to match names or potential descriptions to connect a perpetrator to the crime. The program alerts the headquarters of the Army’s Criminal Investigation Command, the Navy’s Criminal Investigative Service and the Air Force’s Office of Special Investigations of a possible match. Those investigators analyze suspect information and never know the name of the victim.

“Even with a restricted report, the person’s (offender’s) name goes into the program,” McGinnis explained. “If we have three reports and all three have been put into the CATCH program naming the same subject, then we have a pattern of conduct for that subject.”

Once a serial offender has been recognized by the program, investigators contact the victim’s individually, if contact information is provided, to alert them of a match and see if they would like to convert their restricted report into an unrestricted report, which would also allow investigators to proceed with an investigation. Participation in the program is optional, but encouraged, so other men or women are not sexually assaulted by the perpetrator.

“Research suggests that some suspects commit multiple incidents before being reported or caught. With the launch of the CATCH program, the department has a new tool to identify these suspects,” Dr. Nate Galbreath, deputy director of the DoD SHARP office, said during the program’s launch last year.

Information corresponding to a CATCH program entry will be kept for 10 years, as well as the Sexual Assault Forensic Examination kit corresponding with the case. The CATCH program allows victims of restricted reports to identify the culprit while still remaining anonymous. If the victim decides to change the report status to unrestricted, he or she can be protected.

“If there’s a report, there are ways to protect the victim from reprisal,” McGinnis revealed.

That protection includes the option of requesting a protective order and a change of units or duty stations, if they have filed an unrestricted report. McGinnis explained that there’s strength in numbers. A victim may initially decide to file restricted, but change their report to unrestricted when they realize other Soldiers have reported the same suspect.

For more information on the CATCH program, visit https://www.sapr.mil/catch.

• Editor’s Note: This is part three of a five-part series the Fort Hood Sentinel is writing in regards to the Army’s SHARP program. The next article will focus on leadership credibility. If you are a victim of sexual harassment or sexual assault, reach out for help.