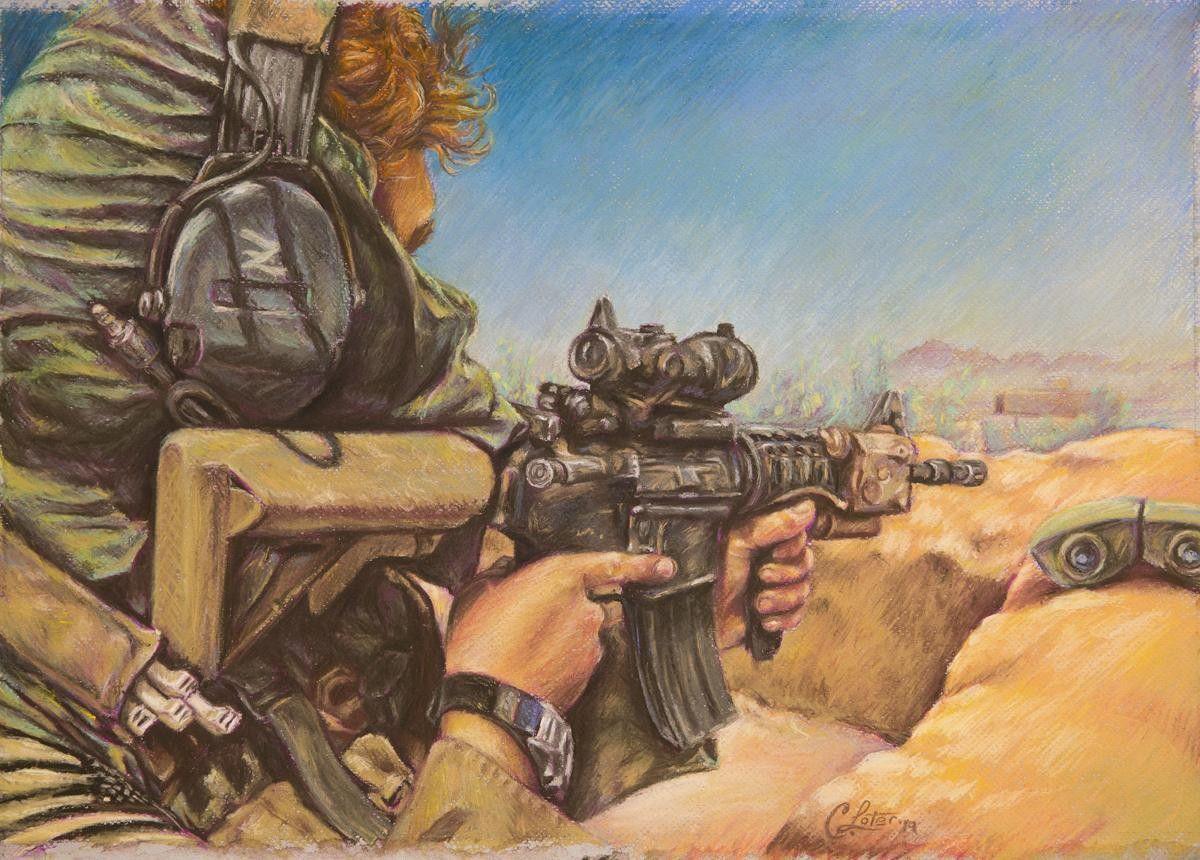 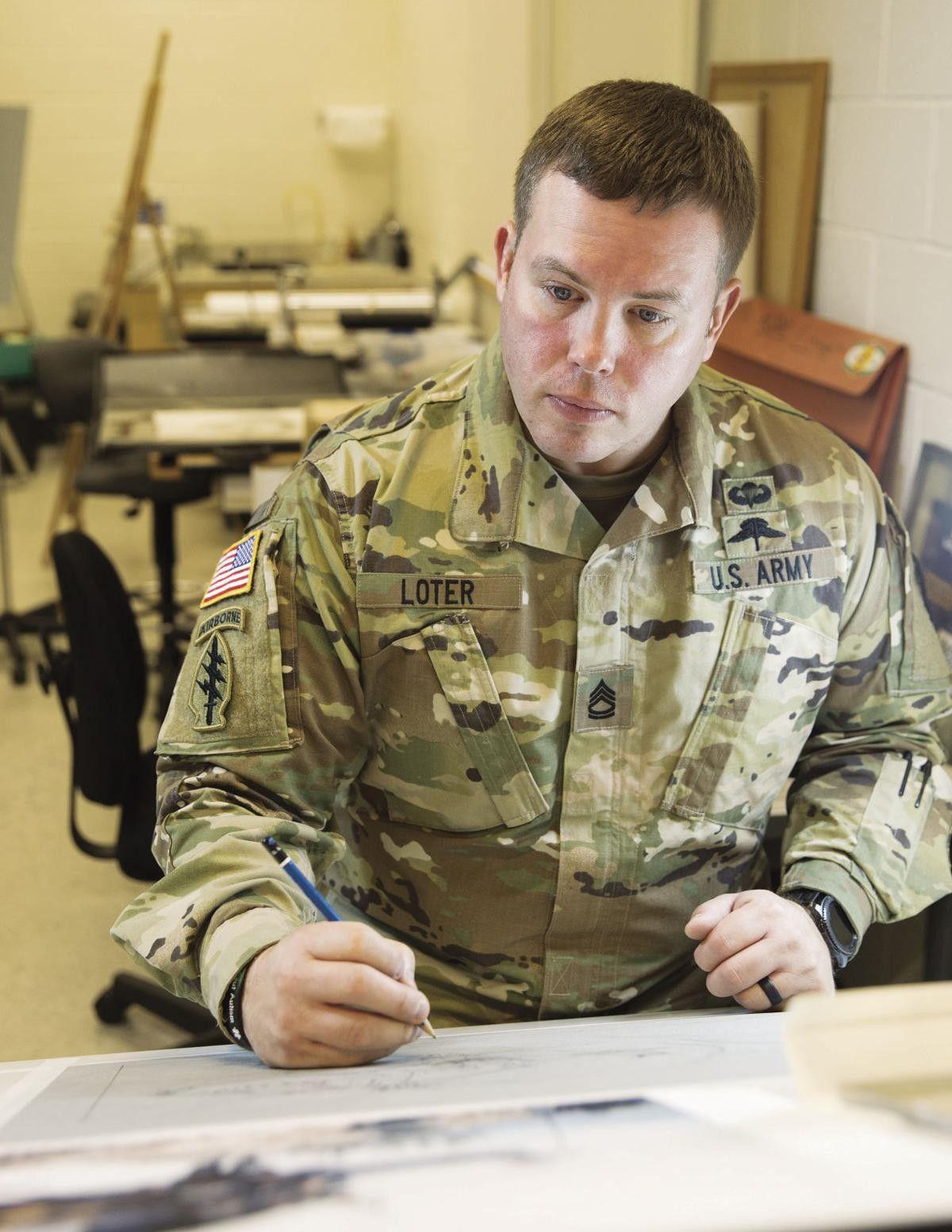 FORT BELVOIR, Va. — On Belvoir’s Theote Road, the U.S. Army Museum Support Center has been springing to life, as workers navigate through the 120,000 square-foot warehouse, gathering, wrapping and boxing artwork for transport down the road to the National Museum of the U.S. Army, scheduled to open in June.

Tucked inside this building is a modest art studio with brushes on the table and sketches taped to the wall, and one special artist — the Army artist in residence.

Sgt. 1st Class Curt Loter is the newest resident. He arrived in October to document Army life for history’s sake. For the next few years, he will try to find genuine moments in ways that have not been documented before; from the fatigue after a firefight, to the boredom on watch, to the games of pick-up basketball between buddies. Contemporary moments drawn by Loter will join the existing 12,000 works by previous Army artists.

A life-long artist, Loter said he was drawing before he could recall.

“My mom used to make jokes about how I’d draw pictures for my first grade teacher and hand it to her — almost every day. I’ve never stopped drawing since,” Loter said.

Loter’s artistry took him to Iowa State University, where he got his degree in graphic design and fine arts. He said he assumed that was his career path for life, but 9-11 altered his outlook. Watching his friends do their duty and enlist, he knew he should, as well.

“So, I walked into the recruiter’s office, and said I want the 25M multimedia illustrator position, and he said ‘we don’t have that job.’ I told him, ‘yeah, you kinda do.’ After some back-and-forth, they realized I should get this job — and it worked out well for both of us.”

“The 25M path is very interesting, because you get to apply your job everywhere you can. My first duty station was 55th Combat Camera and I was doing photography my entire first duty station,” Loter said. “But when projects arose, I was doing graphic design projects, as I could, and it lead to people knowing who I am and what I can do. When they saw my passion, they pushed me down to Army graphics at the Pentagon in 2010.”

After a couple years at the Pentagon, Loter said he was fortunate enough to transfer to Fort Bragg, North Carolina, and apply his craft with Special Operations, where he stayed for nearly eight years.

“They had me doing a variety of things, like jumping out of airplanes, photography, videography, graphic design and social media. It amplified my skill set, exponentially,” he said.

“This position requires the whole package — you need to be technically sound, so you can produce good artwork that can communicate exactly what you’re trying to convey, you have to be tactically sound on several levels and you have to have interpersonal tact that is able to withstand the high levels of leadership you’re going to be dealing with,” he said.

To apply for the residency, Loter submitted a biography, portfolio and an artist’s vision. He said his vision is to produce pieces that might not typically be in the Army’s existing art collection, and he is keen to put one of his other passions on canvas.

“I want to produce artwork that increasingly gets better by the time I leave here, to the point where it becomes very memorable. The best thing I can do is create a piece that becomes memorable and stays with them for a very long time,” Loter said.

In his first month of residency, he completed his first piece. “Scanning” is a charcoal pastel on paper, that depicts his 2008 deployment with the 7th Special Forces Group in Afghanistan. It was a four-day operation in the Zeriko Valley, rescuing 15 prisoners from the Taliban and shows a Green Beret pulling security detail on the rooftop.

Loter said he feels incredibly fortunate to have been given such an opportunity to represent the Army. The residency program is for three to four years, “but, I’ll stay as long as they let me,” he said with a chuckle.