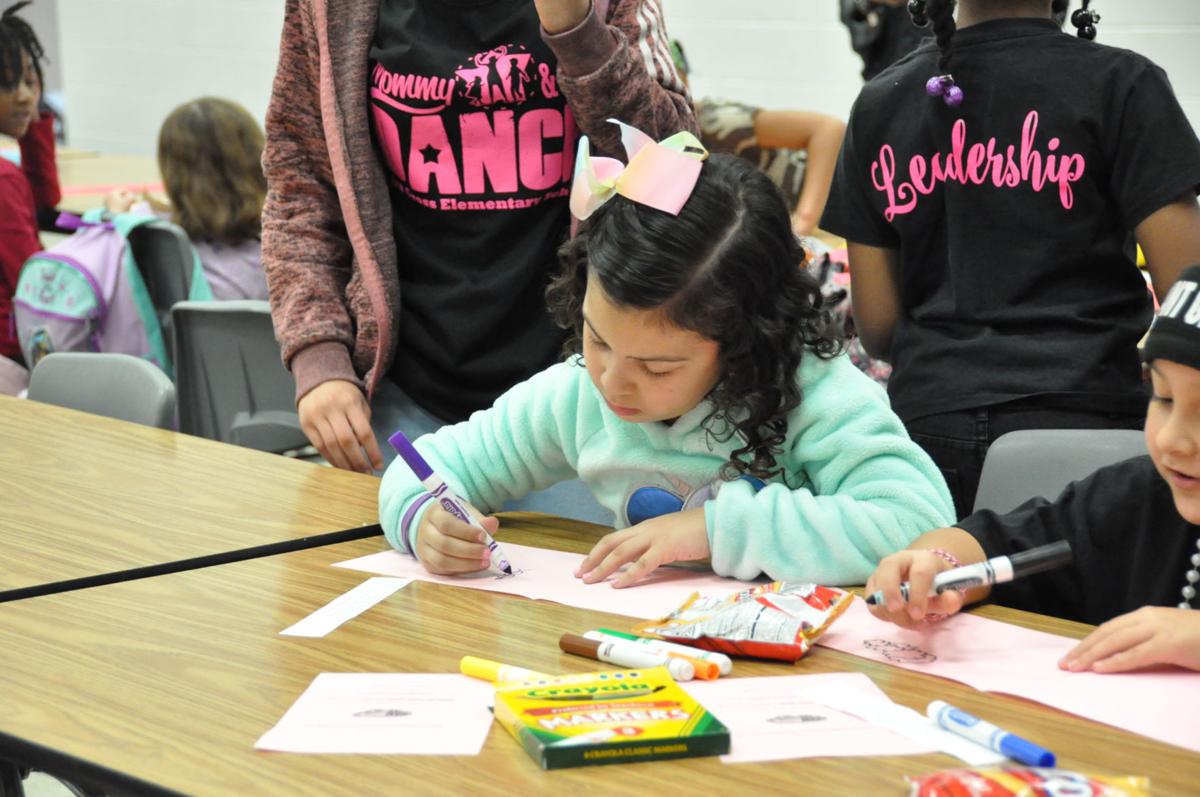 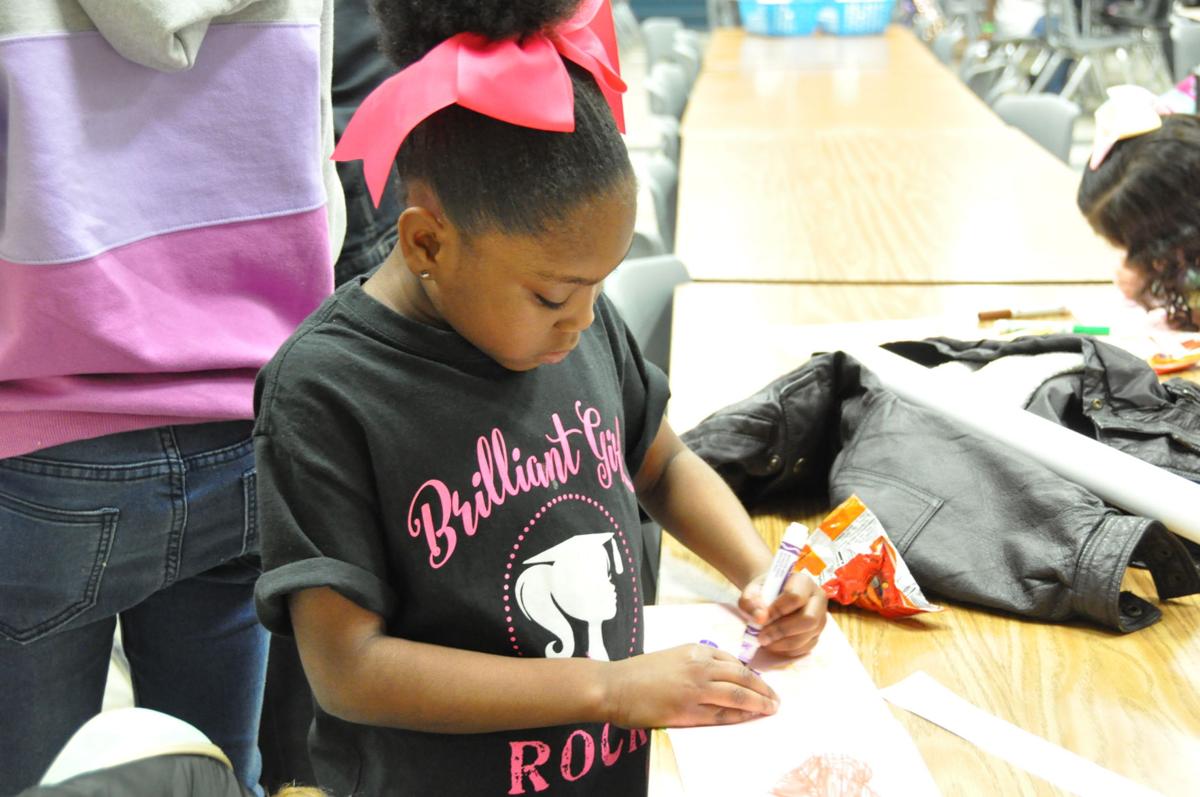 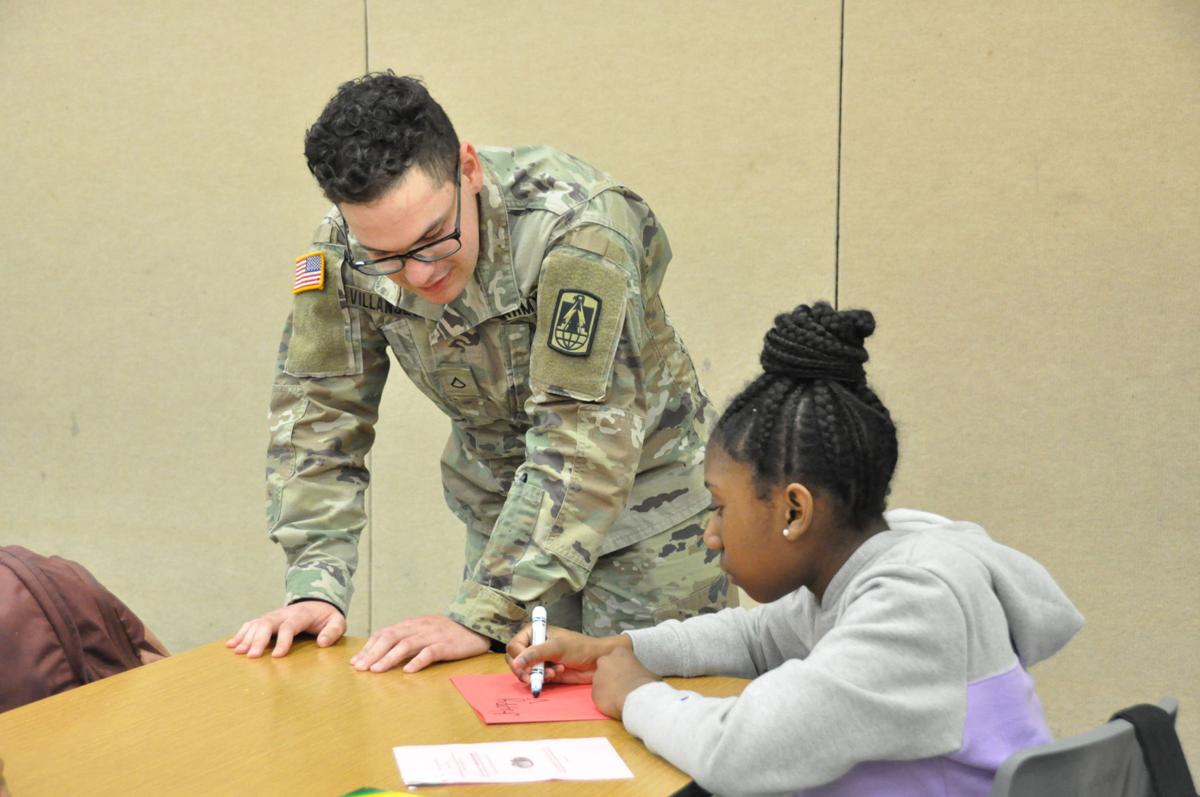 It was a way to get into the holiday’s spirit and share their support at the same time.

During the biweekly meeting, the Soldiers were able to interact with the students. They helped the students with various things, such as creating their cards, spelling out difficult words and answering questions the children had about their jobs in the Army.

“My favorite part is the interaction with the students. I love seeing their expressions when we walk in,” Sgt. Angelique Brown, a frequent Adopt-a-School volunteer, said when reflecting on the event. “They are able to see Soldiers in a more positive view, and I think the students look forward to seeing us.”

The Brilliant Girls Rock Leadership Club was created by Kaili Stanton, a parent liaison with the school, who wanted an outlet where female students could develop leadership skills at an early age.

“I decided to start the club here on our campus in order to build up our girls,” Stanton said. “I wanted to create something where they could learn leadership skills and reach their highest potential.”

Brown said she believes clubs like these are important because it helps young girls build self-esteem and allows them to have positive role models. As a frequent volunteer, she has seen the impact the club makes on the school’s students.

The club is frequently chaperoned by volunteering Soldiers from HHC, 11th TTSB. In previous meetings, the Soldiers have assisted the students with important topics, such as the importance of spreading positivity and helping the school’s efforts to prepare a fundraiser for young cancer patients. The Soldiers have become a consistent addition to the club’s meetings.

“I believe you guys are a great example for our girls and they love seeing you come in,” Stanton told the Soldiers. “It’s a big help because the girls are actually able to see leaders, true leaders. People that lead our country.”

When discussing the effects the club has made so far, Stanton expressed how shy most of the students were when they joined and how much the club has helped them grow.

“They wouldn’t really speak up,” she shared. “But now we see they’re more confident.”

Stanton explained further that when the club was first starting, the students were nervous at the idea of giving speeches. But now, they were begging for a turn to talk.

“That shows us their confidence has really risen,” she said. “They’re really meeting the mark now.”

Every meeting focuses on a different subject, event or skill for the students to work on. Stanton said she tries to hold various workshops for the girls. The meetings cover different topics, such as etiquette, leadership and self-confidence.

“It’s people that understand you. It’s like going through it together as sisters like we’re a family,” 5th grader Gabriela Diaz said. “I’ve learned to be yourself, you don’t have to follow people’s actions and don’t be disappointed if people judge you.”

The Soldiers find assisting their Adopt-a-School rewarding because they aren’t just helping a school, they’re helping individuals and trying to make a small difference in their lives.

“Seeing their smiles and how happy they get when they see a Soldier, it assures me that the sacrifices I’ve made to become a Soldier are worth it,” Pfc. Moises Villanueva, Headquarters and Headquarters Company, 11th Theater Tactical Signal Brigade, said. “I think our participation helps by creating a connection. By taking part in the growth and environment of the kids, we form ties with the community and future generations.”