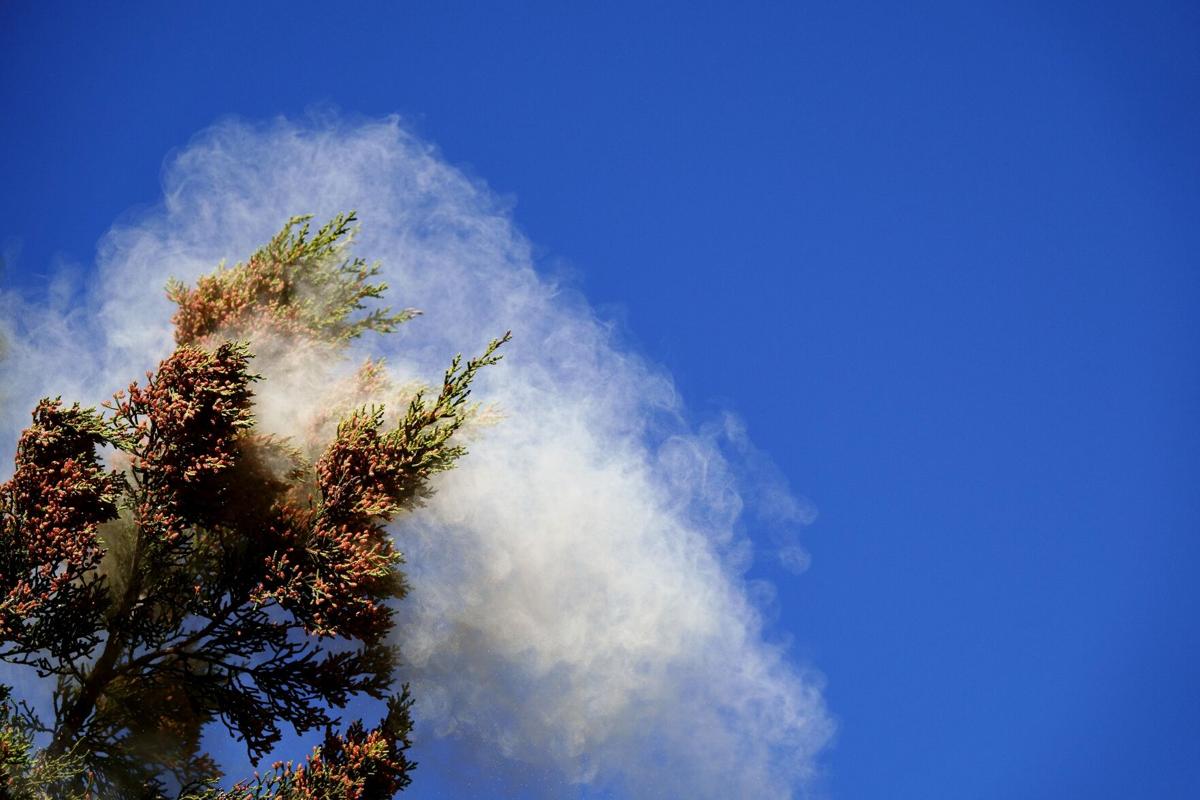 Pollen fronds of a male cedar tree releasing pollen into a clear blue sky on a windy day.  Not all pollen explodes as intensely as this, but it can be intense at times. 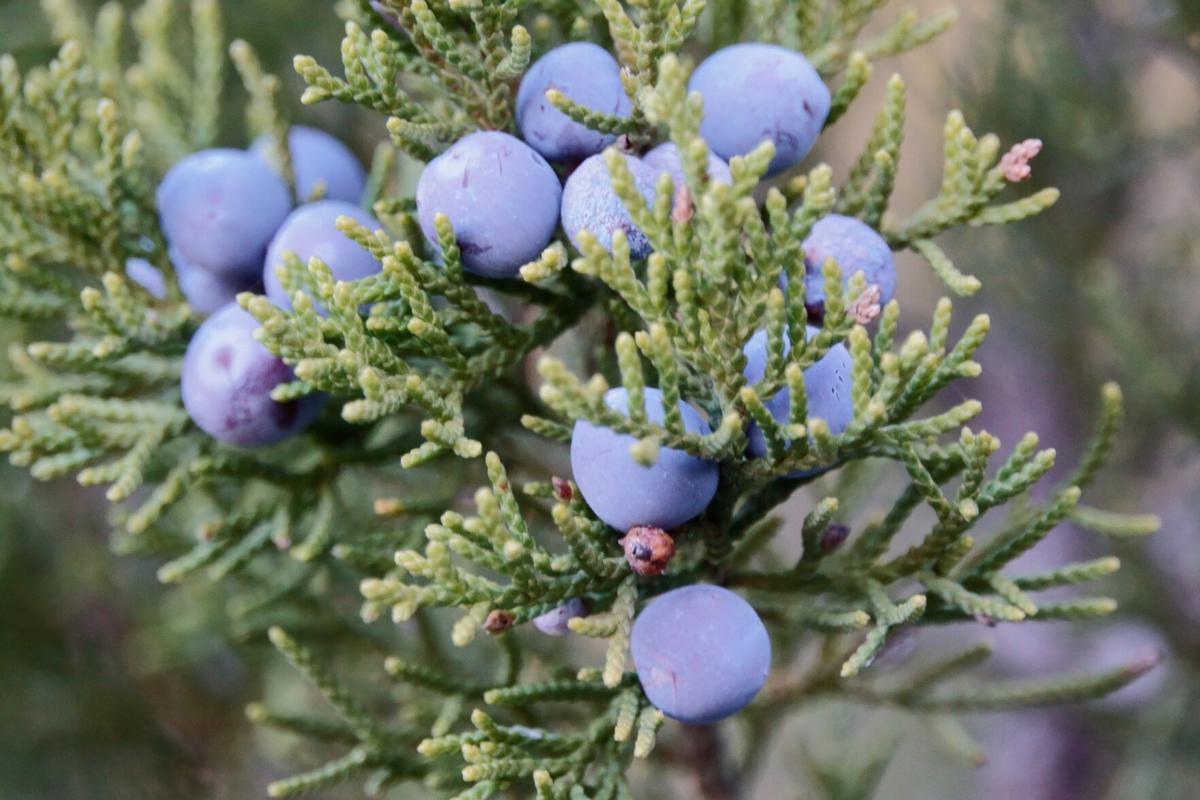 Cedar berries (technically referred to as cones) found on limbs of a female cedar tree. 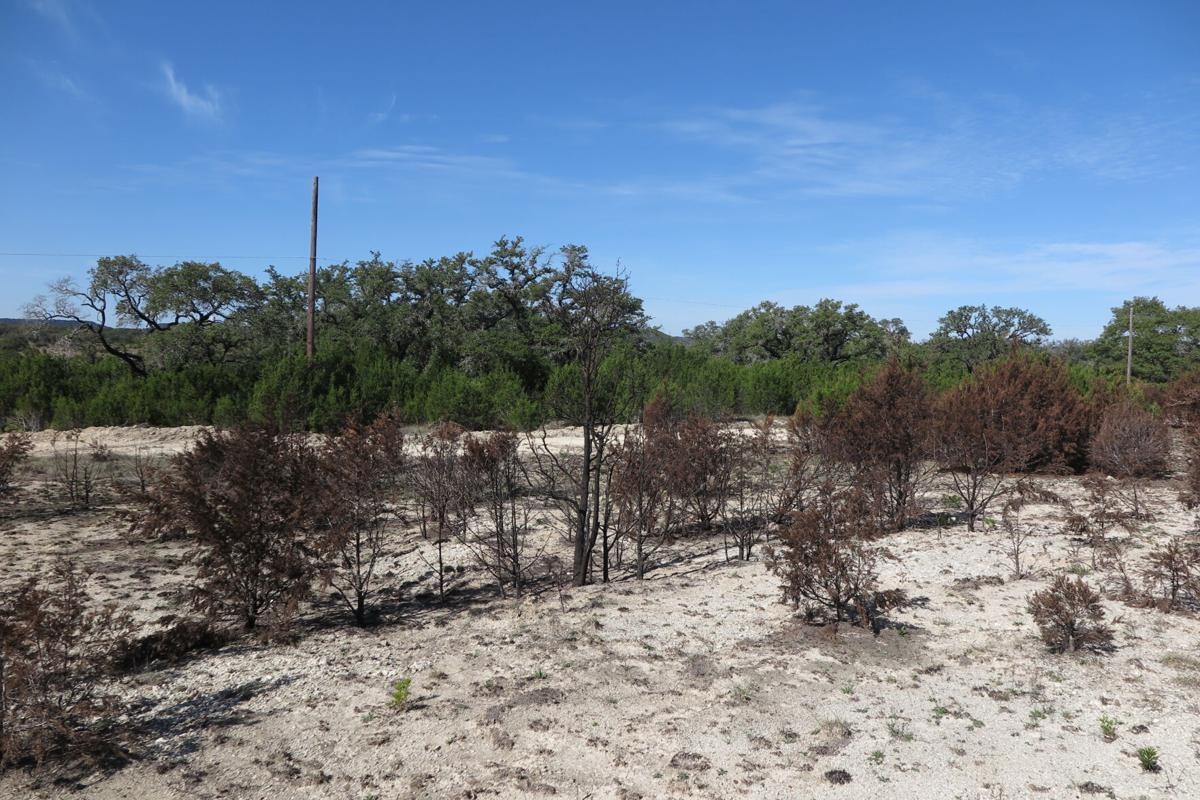 Pollen fronds of a male cedar tree releasing pollen into a clear blue sky on a windy day.  Not all pollen explodes as intensely as this, but it can be intense at times.

Cedar berries (technically referred to as cones) found on limbs of a female cedar tree.

If you’ve taken a country drive in central Texas, or if you’re familiar with the landscape of Fort Hood, you have noticed forested slopes of mesas and canyons. Most of those dark evergreen trees are cedars, also known as mountain cedar or Ashe juniper. About half of them are beginning to change color – and not because of a change in season. Soon, local allergy sufferers will wisely stock up on allergy antidotes and try to avoid the great outdoors.

From about December to February cedar trees take advantage of any wind to get pollinated. The males, laden with amber-hued limbs, release copious amounts of microscopic pollen, which from a distance looks like an off white puff of smoke. The females produce purple berries (actually cones) in which they receive pollen. Wind pollination is effective but very inefficient, as most of it gets wasted – leaving a yellow film on our cars, windows, and outdoor furniture. Inevitably some pollen grains also end up in our sinuses, resulting in the allergic reaction known as ‘cedar fever’ that some of us experience – watery eyes, congestion, sneezing. Though the pollen has no scent, all other parts of the tree exude an oily resin that gives off a pleasant cedar-like aroma, especially when cut. Of course, smelling the volatile oil will not induce an allergic reaction.

Some days the pollen is so dense in valleys and canyons, that people call the fire department thinking there’s a fire somewhere. Indeed, Fort Hood Fire Department Chief Mr. Sergio Campos reports that his stations have received calls due to this phenomenon. Campos adds that he and his colleagues are aware of the cedar season and associated pollen, so each call is taken seriously but can end up being a false alarm.

Contrary to legend which suggests that cedars were introduced into the local area and have tap roots that suck the underground water, they are actually native and do not have long tap roots to suck the water table dry. However, they can invade areas they did not previously occupy like pasturelands and shade tree understories. Experts suggest their invasion into these habitats of Central Texas is because of fire suppression, coupled with overgrazing of domestic livestock.

If you drive northward up East Range Road and look into the Live Fire region between Sugar Loaf and Brookhaven ranges you will see a mesa-like mountain known as Smith Mountain. Though Smith and all of Live Fire is off limits to personnel, you can view safely from the roadway. This mesa land feature is one of a kind, because it is treeless. Every other mesa in its vicinity is covered in trees, mostly cedar.  Recurring training fire is what makes Smith Mountain the treeless landscape gem that it is.

Once cedar is removed at the ground, or its top foliage completely burned-off, it will not sprout back like hardwoods such as hackberry and oaks.

Cedar spreads by birds and animals that consume, digest, and defecate fertilized berries (cones). This spread, combined with fire suppression, in most of central Texas is what keeps cedar robust throughout suitable soils. Cedar is endemic to central Texas wherever there is well-drained soil made of Cretaceous-age limestone. It thrives in the shallow rocky limestone soil prevalent on slopes and canyons.

Here on Fort Hood, the Natural and Cultural Resources Management Branch maintains the training and maneuver areas with prescribed burns because the entire region evolved under fire long before European settlement. These prescribed burns are conducted to control cedar in open meadows. Similar to, but not as intense or frequent as Smith Mountain wildfires, prescribed fire reduces cedar occurrence and helps maintain a landscape for training realism by maintaining line-of-sight areas for Soldiers. The NCRMB goal is not to burn too much, but just enough area annually to keep the landscape healthy with a combination of both open grasslands and cedar-dominated woodlands.

The NCRMB prescribed fire team will burn now through March as time, weather and resources permit to carry out the burns safely and effectively.