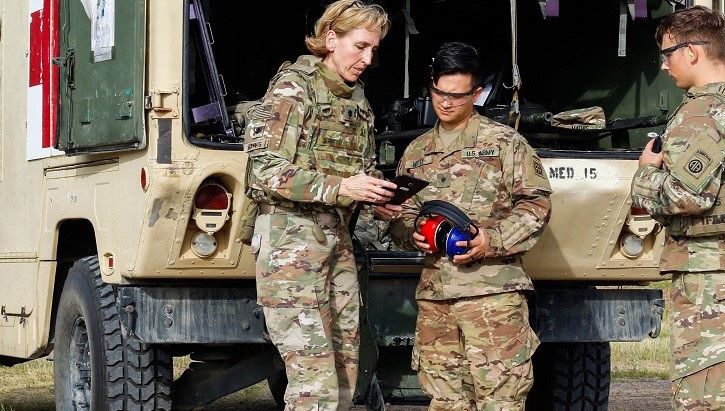 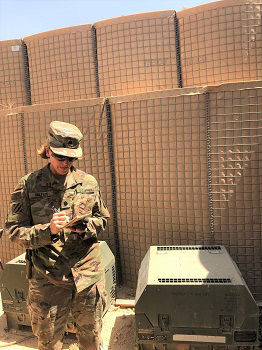 FALLS CHURCH, Virginia — With just a protective case at her side, an Army audiologist traveled across Iraq, using a novel, compact hearing test technology with a game-changing capability to effectively assess and diagnose hearing-related injuries far forward on the battlefield.

“Although challenging, I was able to move around the battlefield, either bringing the new capability to a site or basing out of the Role 3 with the Hospital Commander’s support to receive patients,” explained Curry-Mathis, who deployed as part of Combined Joint Task Force-Operation Inherent Resolve, which authorized her to travel across Kuwait and Iraq to test the equipment. “The most common comment I heard from providers was they wished I had been there throughout the tour. Surprising, but very encouraging. I was able to do full diagnostic tests for Soldiers and some civilians, and the equipment wasn’t a problem regardless of movements on rotary or fixed wing aircraft.”

The innovative system, called the Integrated Platform for Clinical Assessment and Monitoring, is the result of a research project initiated in 2013 by the Department of Defense Hearing Center of Excellence, a division of the Defense Health Agency Research and Development Directorate; and was conducted in collaboration with the U.S. Army Medical Research and Development Command and the Army Public Health Center.

With the requirement to maintain mobile functionality, the prototype consists of a Wireless Automated Hearing Test System headset, a computer tablet with custom, hearing-related software and an integrated dosimeter. The package was augmented with a lightweight, compact immittance bridge and otoacoustic emissions system, used by audiologists to test the condition of the tympanic membrane (eardrum), middle and inner ear.

“This technology will enable audiologists to test hearing injury at the source with a better and quicker assessment to determine the next level of care and treatment,” Hearing Center of Excellence Division Chief, Air Force Col. (Dr.) LaKeisha Henry said. “Ultimately this capability will help save hearing and keep military members healthy and mission ready.”

Historically, audiologists are rarely deployed because hearing tests required a fixed hearing booth and the equipment is too cumbersome to move in deployed locations.

“Moving around the battlefield is not easy, even in a mature theater. There is no forward line of engagement, and you don’t necessarily know where the enemy is or whether your patient will be accessible, but the timeline is so crucial to preserving treatment options,” Curry-Mathis said.

Hearing damage was therefore unknown, and not fully assessed or treated at or near the point of injury.

“Service members were either evacuated out for a perforated ear drum or other injury, which is costly in terms of manpower and expense, and in some cases unnecessary, or they were questioned if their hearing was okay, and if they said ‘yes,’ they were sent back to their units with no assessment. The risk was huge because we didn’t know the damage,” Curry-Mathis explained. “Given the fact that hearing loss is bloodless and painless, Soldiers often don’t understand the extent of the injury, or its consequences and since they knew there was no treatment for it, they kept silent. That’s all about to change.”

During her short deployment, Curry-Mathis assessed 17 patients, nearly 30% of whom sustained a vestibular (balance) system injury from a high-risk exposure. With the portable equipment and/or a folding examination table, she conducted full diagnostic tests, identified and treated the balance dysfunctions found in up to 15% of blast exposures and concussions, and fitted service members with advanced hearing protection that protects while maintaining situational awareness.

“Research has demonstrated in multiple venues that even a mild or temporary hearing loss will significantly impact the survivability and lethality of a soldier,” Curry-Mathis explained. “My job is to keep the injured Soldier safe while maintaining his combat effectiveness.”

When service members saw Curry-Mathis, she said they were relieved because it meant there was a good chance they would be able to stay in place and continue the mission.

In one case, a British infantry soldier was injured during a squad exercise after his left earplug came out while firing. By the time he put the earplug back in, he was exposed to 15 live rounds and sustained --sudden hearing loss.

After reporting the injury to his commander, he was medevaced to the Role 3 hospital for assessment by Curry-Mathis.

“The next morning I did the battery of tests using the IPCAM system and determined he had a classic noise-induced hearing loss in the left ear,” explained Curry-Mathis.

This additional information provided to Lt. Col. (Dr.) Linda Orr, Royal Army Medical Corps’ ear, nose and throat surgeon, helped to define the soldier’s injury profile. “He had to be pulled out of theater, but we had a shot at recovery because we kept the timeline to treatment in England very short,” furthered Curry-Mathis. “This is just one example of many where we may be able to intervene on a serious, and typically permanent injury.”

Although the assessment was given in theater, the soldier had to be flown back to England to receive specialized treatment only available to him in Birmingham. If administered within two weeks of the trauma, the treatment is extremely effective at blunting the injury or even recovering the hearing.

“I’m so thankful this worked out so well, and that we were able to provide Lieutenant Colonel Curry-Mathis with the equipment needed for this pilot,” Henry concluded. “I’m especially excited that our partnerships with the UK have demonstrated further proof of concept of downrange mobile capabilities.”