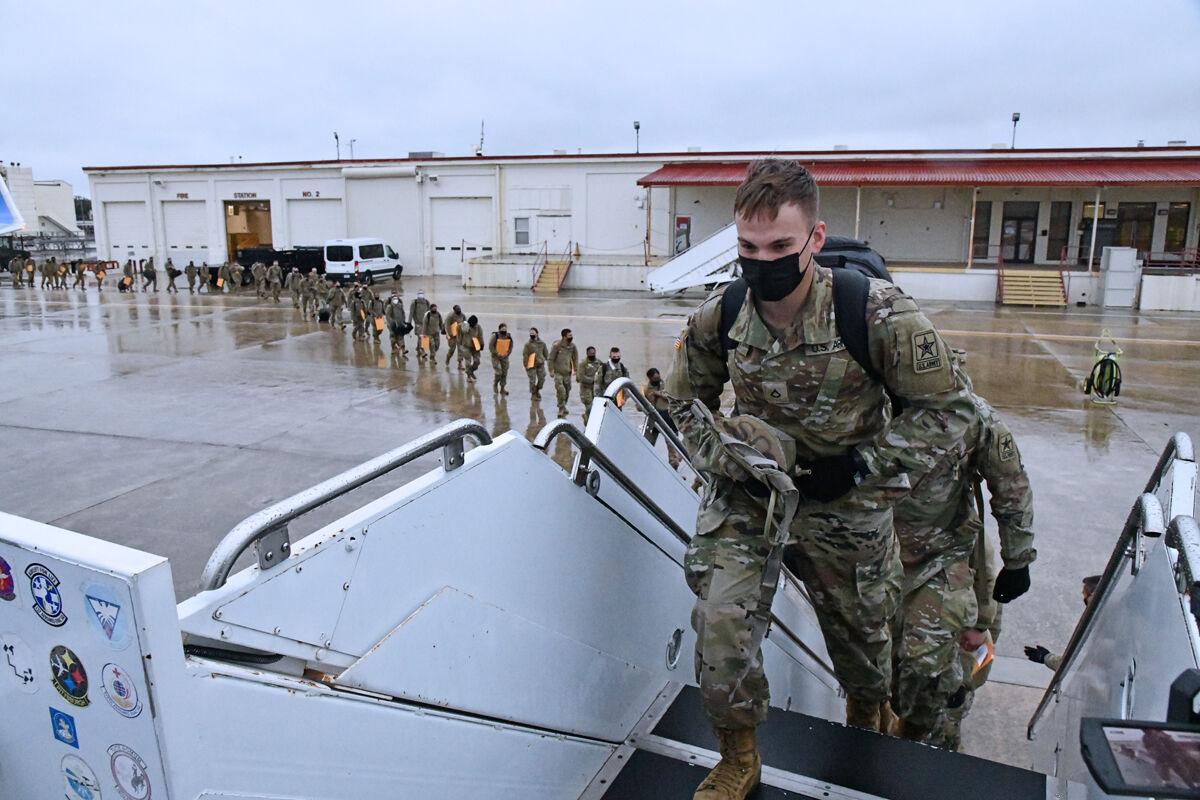 MEDCoE AIT Soldiers board a contract airplane at JBSA-Kelly Field that will take them to their first duty assignment Feb. 11, as they conducted a controlled outbound movement for over 250 Soldiers. 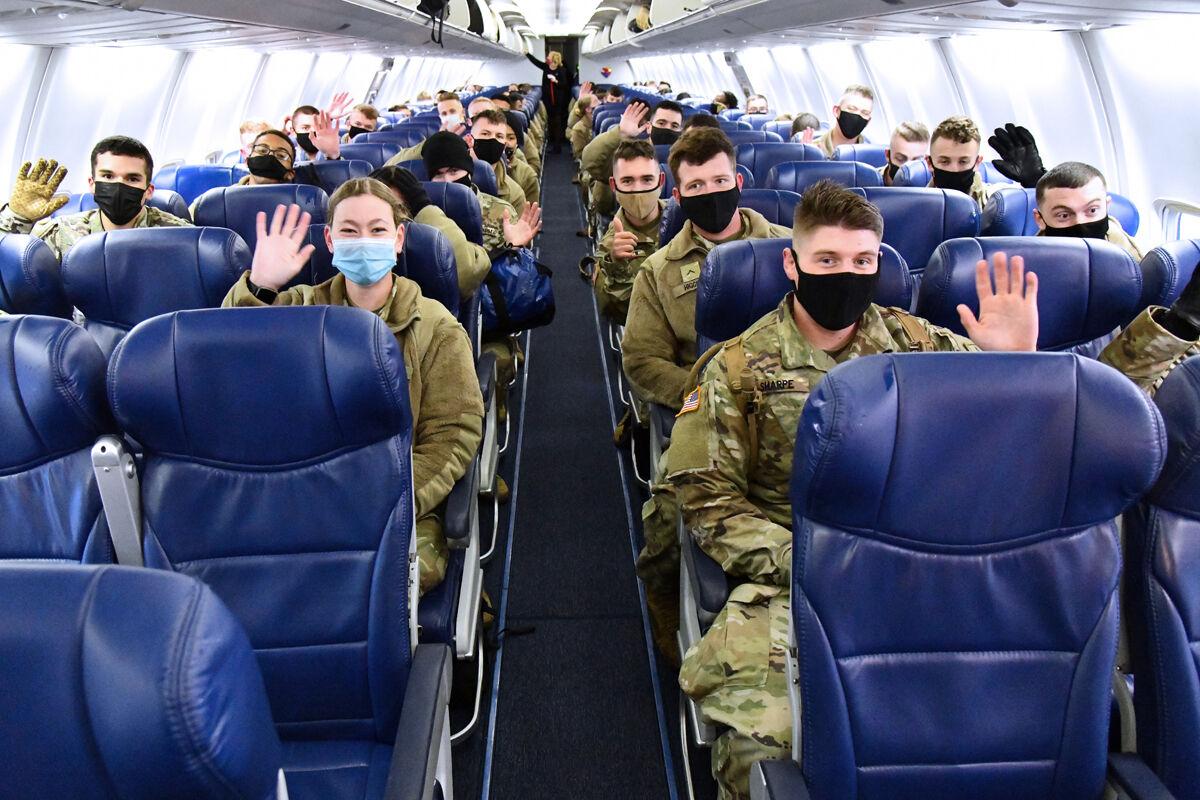 MEDCoE AIT Soldiers wave while onboard a contract airplane at JBSA-Kelly Field that will take them to their first duty assignment Feb. 11. 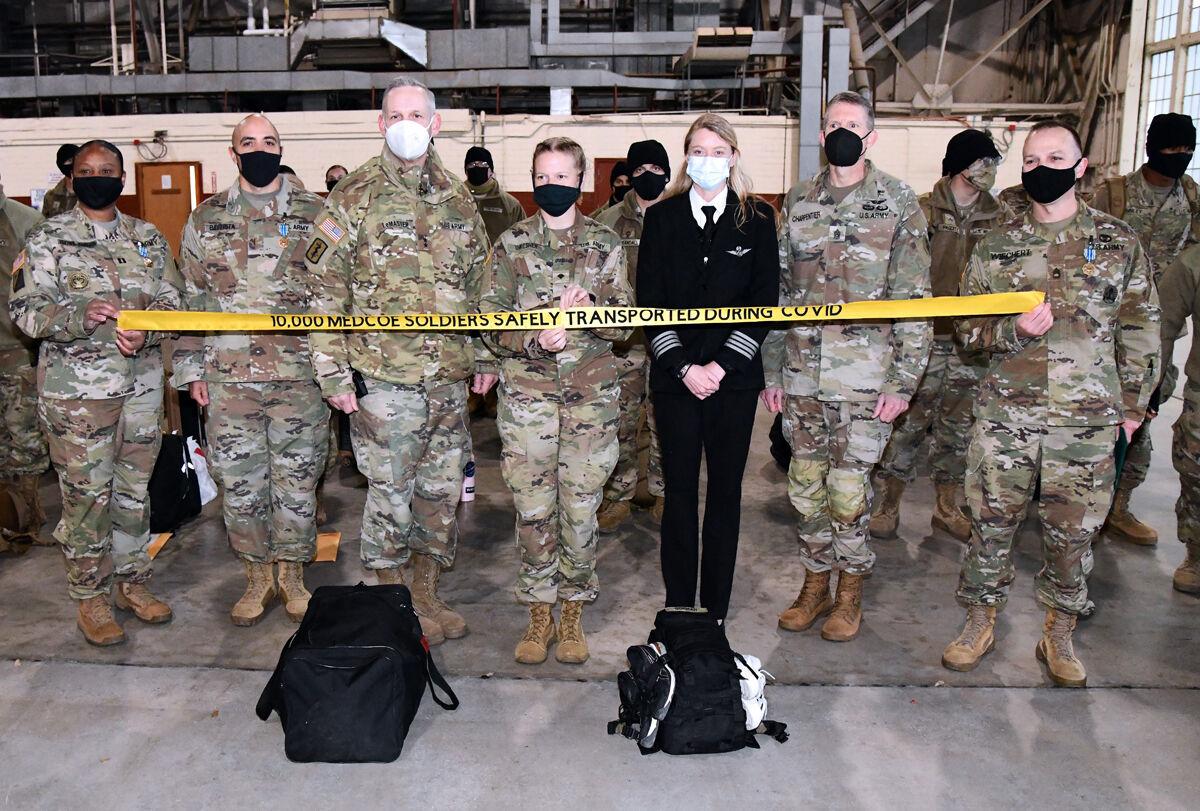 MEDCoE AIT Soldiers board a contract airplane at JBSA-Kelly Field that will take them to their first duty assignment Feb. 11, as they conducted a controlled outbound movement for over 250 Soldiers.

MEDCoE AIT Soldiers wave while onboard a contract airplane at JBSA-Kelly Field that will take them to their first duty assignment Feb. 11.

The Army component for medical training and education has safely transported over 10,000 Advanced Individual Training trainees into and out of the Soldier training pipeline since COVID-19 mitigation measures began early April 2020. They reached the milestone during one of five scheduled air and ground movements in support of over 250 Soldiers Feb. 11, on Joint Base San Antonio-Lackland’s Kelly Field.

Maj. Gen. Dennis LeMaster, MEDCoE commanding general said, “Today represents the 10,000th Soldier that we have shipped from AIT to the first unit of assignment, anywhere in the world. We have not shipped a single sick soldier and this is a remarkable achievement by the entire TRADOC team.”

The unit, which is based here at JBSA-Fort Sam Houston, has conducted over 260 such moves in the last nine months since COVID began.

During the early days of the pandemic, LeMaster admits that the Army wasn’t sure if they were going to continue to allow travel to and from training installations in order to keep the training pipeline open.

“The outlook was uncertain,” he explained. “We simply didn’t know how we could continue to train and maintain the health of the force.”

The first thing the organization had to do, he continued, was establish a so-called safety bubble around the training environment to ensure disease wasn’t coming in. They did this initially through screening for the signs and symptoms of illness. Now, trainees are tested for COVID and complete two weeks of quarantine before they are allowed into the safety bubble. Asymptomatic and symptomactic Soldiers both receive receive a test.

“The next challenge was to ship our Soldiers, worldwide, safely too,” LeMaster said.

Army Capt. Cotrena Brown-Johnson is the medical logistics officer responsible for coordinating the movements in the MEDCoE.

Brown-Johnson said moving Soldiers in this manner takes a lot of planning and resources, but it is the safest way for trainees to travel during COVID. The moves are accomplished using the most controlled and isolated methods possible. Even aircrews and bus drivers are screened for COVID and the aircraft and buses are sanitized before and after travel.

Brown-Johnson explained the evolution of the current process.

“From the beginning we used to use San Antonio International Airport, but now we are more consolidated here at Kelly Field. So, we give thanks to the San Antonio military community, JBSA for all of the resources and support they have given us. It has allowed us to streamline our processes, improving upon moving the soldiers out especially in a more expedient, timely manner,” she said.

The Soldiers graduated Basic Combat Training before they arrived on JBSA to complete advanced medical military occupational specialty courses of varying lengths. They will now either travel to their first unit of assignment, the next phase of their specialty training, or other military schools like Ranger or Airborne School.

The 10,000th Soldier was identified as Spc. Angela Thresher, a 68W, combat medic originally from Washington State, who attended Basic Combat Training at Fort Sill, Oklahoma, in July and arrived to Fort Sam Houston for AIT at the MEDCoE in October.

“I was just told that I am the 10,000th Soldier moved,” Thresher said. “I think it’s a great accomplishment for the Army especially in this time of the pandemic.”

She thinks she, and her peers with medical specialty training, will be at the forefront of fighting the pandemic.

“Our training is going to come in handy,” Thresher said. “I think a lot of people here don’t know how much it’s going to affect how they are going to work in this pandemic.”

The 33 year old, who joined the Army later in life and had already earned an undergraduate and master’s degree, is now headed to her first unit of assignment at Tripler Army Medical Center in Hawaii.

Bundled up for the cold, rainy weather and associated temperature lows of the cold front that settled into San Antonio Thursday morning, Thresher said, “I am looking forward to going to a state I have never been to. I am also looking forward to the warmth at the moment.”

For his part, LeMaster said he was proud of all 10,000 Soldiers and the leaders and planners who have ensured the readiness of the operational and generating force through the controlled moves.

About his expectations for all trainee movements during COVID, LeMaster said, “That our Soldiers remain healthy and they protect the safety bubble and they arrive at their first unit ready to go.”

LeMaster also said that the unit was postured to implement these and other COVID mitigation measures for “as long as it takes” and that he is confident the unit and their trainees will continue to thrive.

In the last 47 weeks since dealing with the pandemic, MEDCoE has graduated over 18,000 students in nearly 800 courses. These are doctors, nurses, combat medics, physician assistants, respiratory therapists and other medical personnel who may soon indeed find themselves on the frontlines of the pandemic.