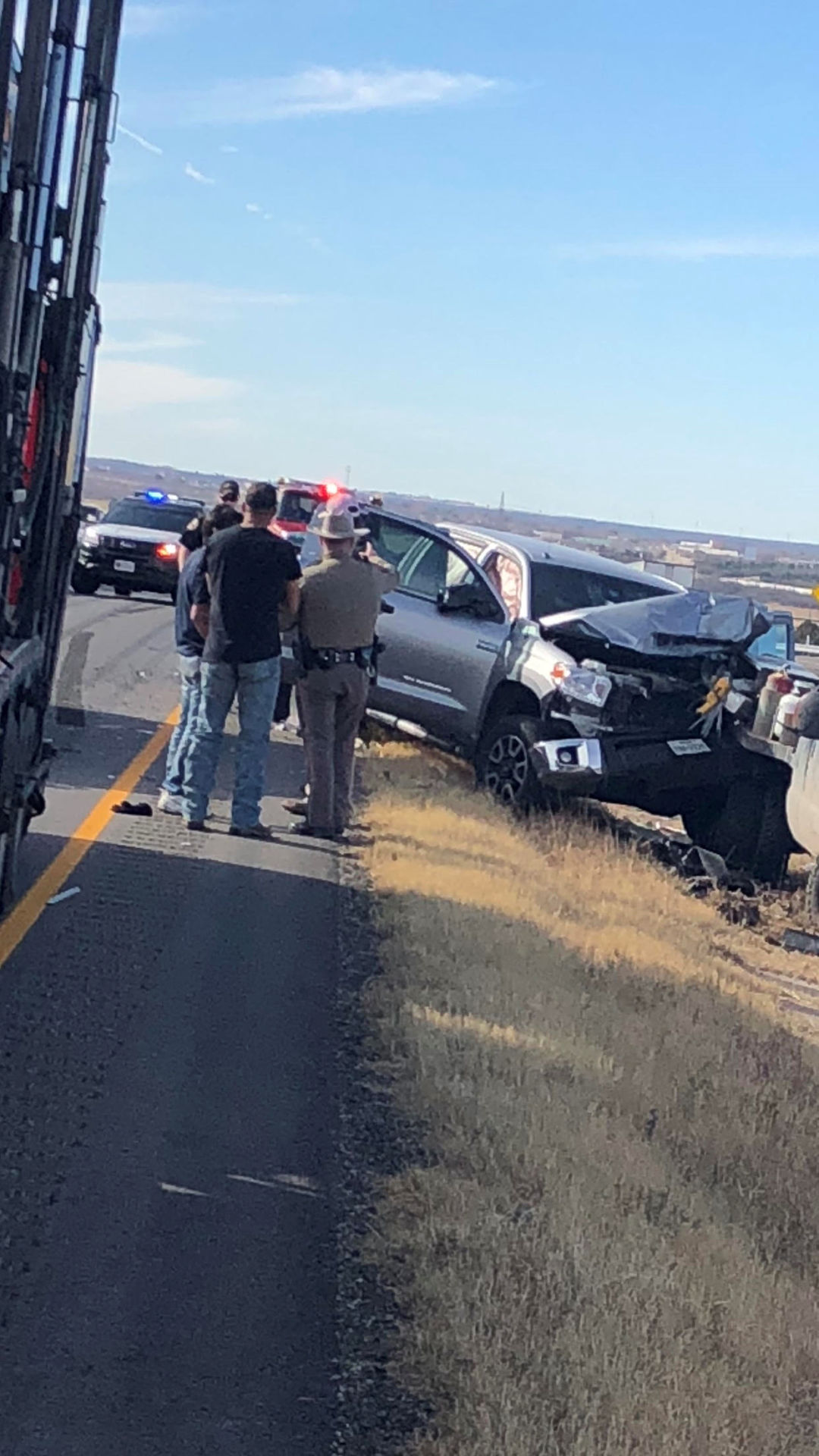 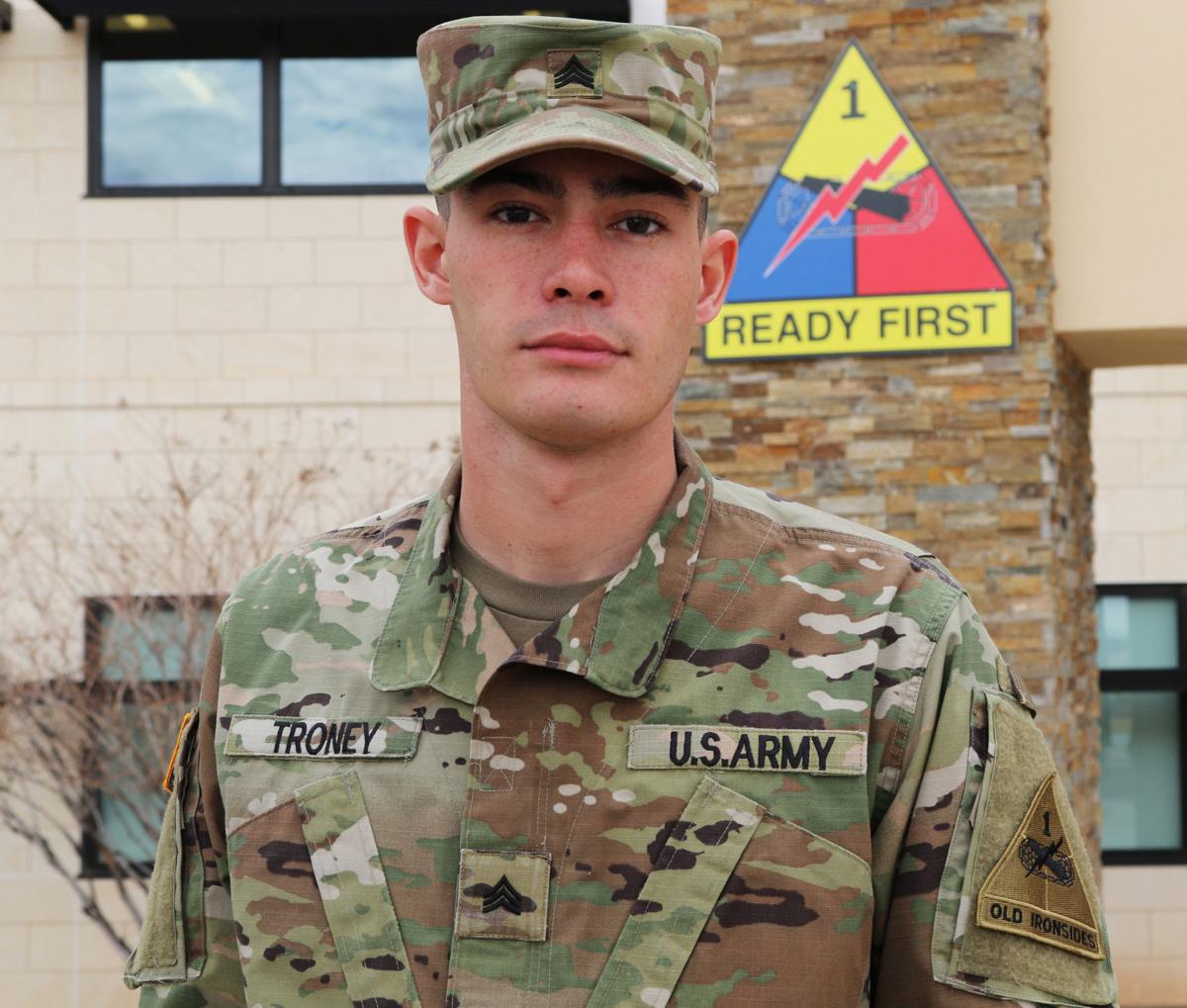 FORT BLISS — Sgt. Trey Troney credits training he received from his unit’s medics for helping him save a man’s life after an accident on Interstate 20 near Sweetwater, Dec. 22.

Troney, 20, was on his way home for Christmas to Raleigh, Mississippi, a small town about 1,085 miles east of Fort Bliss, when he saw the accident at about 2 p.m. and pulled over.

Seeing Jeff Udger, of Longview slumped over the steering wheel of his truck, Troney asked two other men to help him pry open the door. Udger had a bad gash on his head, and Troney took off his brand new “Salute to Service” New Orleans Saints hoodie and wrapped it around Udger’s head to help stop the bleeding.

At this point, Udger was still conscious enough to make a joke about it, Troney said.

“Well, this is Cowboy country, so I don’t know how I feel about you wrapping me up in a Saints hoodie,” Udger told Troney.

Soon after, however, Troney noticed that the left side of Udger’s chest wasn’t moving, and he realized Udger had a collapsed lung. Troney ran back to his Jeep, hoping he still had some first aid supplies left from the brigade’s recent rotation at the National Training Center in Fort Irwin, California. Sure enough, he had a Needle Chest Compression, or NCD, and an Individual First Aid Kit, or IFAK, so he grabbed them and ran back to Udger.

While his training made the use of the NCD second nature for Troney, he had to think fast after the NCD needle was too small to reach into Udger’s collapsed lung and relieve pressure.

Finding a ballpoint pen, he had an idea. He tore off the ends of the pen and took out the ink so it was just a hollow tube.

“I took the NCD and put it right in the hole and kind of wiggled (the pen) in with my hand in between the ribs and you just started to see the bubbles come out of the tip, and I was like, ‘OK, we’re good,’” said Troney.

The state trooper who had just arrived asked, “Did you just put an ink pen between his ribs?”

“I was like, ‘I did,’” Troney said. “And (the state trooper) was like, ‘he’s on no pain meds,’ and I said, ‘oh, he felt it, but he’s unconscious. He lost consciousness as I was running back to my Jeep because he had lost a lot of blood.’”

When the ambulance arrived about 10 minutes later, the paramedics credited Troney with saving Udger’s life, and the state trooper bought him food at the truck stop up the road. Still, Troney said he was afraid Udger might try to seek legal action if he had made any mistakes. On the contrary, as soon as Udger recovered enough to respond, has been contacting government officials, the media and Troney’s chain of command – all the way up to his brigade commander, Col. Michael Trotter – and telling them how thankful he is for Troney’s actions.

“In an urgent situation (Troney) showed amazing patience and continuous care,” Udger said in an email. “He kept talking to me and acted as if the situation was no pressure at all.”

In a phone interview, Udger said he is glad Troney left behind his email address so he could contact him, and he has offered to replace Troney’s hoodie. Troney said the loss of the hoodie means nothing to him and there is no need for Udger to replace it.

Doctors expect me to make a full recovery, said Udger.

“We train over and over; it’s like muscle memory. Not to sound biased, but at 2-3 (FA Regt.) … they’re some of the best combat medics that I’ve ever met,” said Troney.

Capt. Angel Alegre, commander, Btry. C, 2nd Bn., 3rd FA Regt., 1st SBCT, 1st AD, said he has worked with Troney for about a year and recently became his battery commander. Knowing Troney, his actions at the accident scene do not surprise him, he said.

“Put simply, he is a man of action and excels in times of adversity. It’s what he does best,” Alegre said. “Sgt. Troney is very attentive and places great emphasis on all Army training. To be available when needed as a Combat Lifesaver (Course) qualified (noncommissioned officer), and especially to have the IFAK readily available sitting in his vehicle, many could say is nothing short of a miracle.”

Troney has set the example and represented the battery, the battalion and the brigade very well, Alegre said.

“I will speak for all when I say we are very proud of one of our own, one of our best and brightest, being ready and able to answer when called upon to help someone in need,” Alegre said.

Troney said he has been in the Army for about three years and the incident taught him how his training can help others outside the Army.

“I was in a pair of jogging pants and a T-shirt on the side of a highway and somebody’s life depended on me slightly knowing a little bit (about emergency medical care),” Troney said. “It wasn’t anything crazy (that I knew), but to (Udger), it was his world.”

Troney said one of the things Udger told him in an email will always mean a lot to him: “Young man, you will always be my hero. Continue to give back to this world and the people in it. You truly will never know when you will make a life-changing impact to someone.”

Troney said he learned from the incident that you never know what a person might need.

“You’re just there and you might have what they need,” said Troney. “He needed an ink pen to the ribs. Luckily I had an ink pen.”

Put simply, he is a man of action and excels in times of adversity. It’s what he does best.