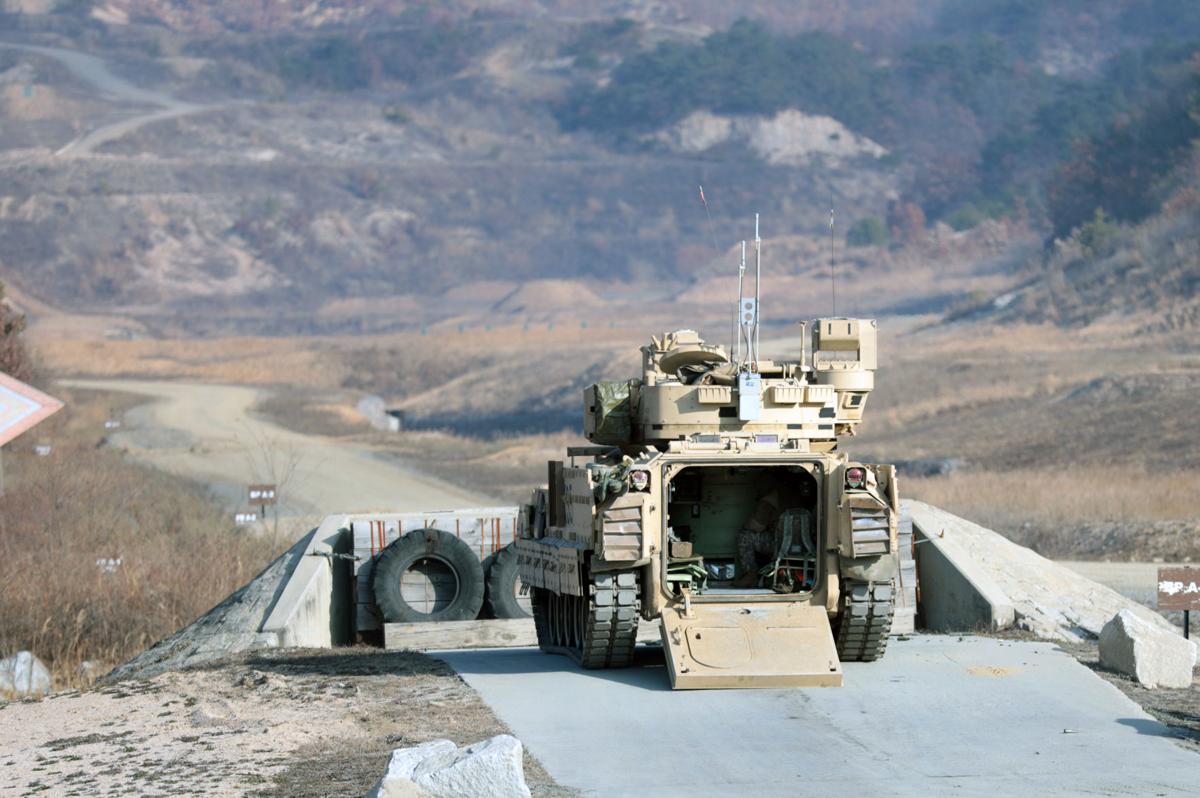 A master gunner from 3rd BCT, 1st Cav. Div., trouble shoots a Bradley Fighting vehicle during gunnery in Korea. Master gunners are experts on their weapons systems and ensure crews are properly trained and gunnery is conducted to standard. 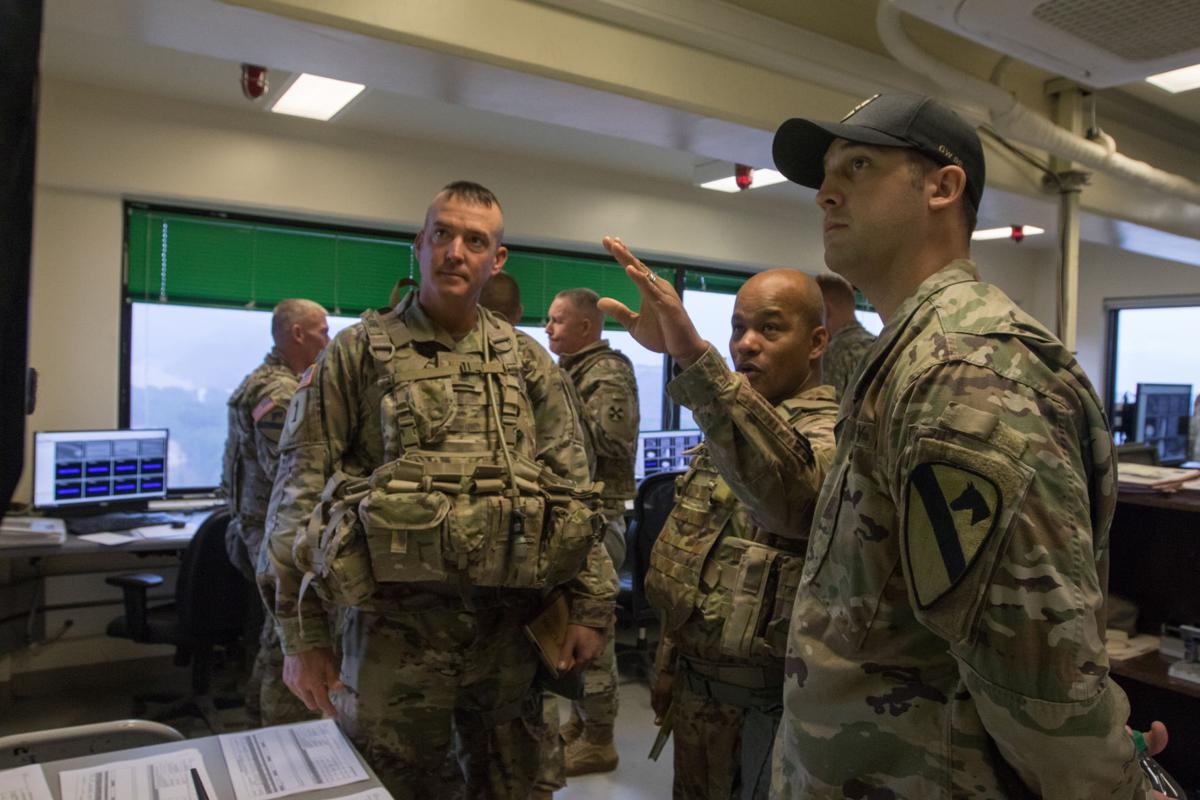 A master gunner from 3rd BCT, 1st Cav. Div., trouble shoots a Bradley Fighting vehicle during gunnery in Korea. Master gunners are experts on their weapons systems and ensure crews are properly trained and gunnery is conducted to standard.

RODRIGUEZ LIVE-FIRE COMPLEX, Republic of Korea — The steam from the hot cup of coffee floated in the air past a monitor showing various thermal camera angles of the same scene. A shot of a M2A3 Bradley Fighting Vehicle sitting in a battle position. A shot of the mountainside, the Bradley is facing in the distance where plywood targets would pop-up shortly. The thru-site picture of what the gunner and vehicle commander are looking at.

The noncommissioned officer watching all of these scenes from high up in the range tower sips his coffee as a target pops. The Bradley fires and the white hot 7.62 mm rounds go high.

“Tell him he’s not a sniper,” Sgt. 1st Class Thomas Brazel said. “He needs to be sure he is using a z-pattern.”

This was a chance for the crew to zero their weapon systems before conducting Table IV of Bradley crew gunnery qualifications. It’s also a chance for the master gunner, the battalion subject matter expert on all things gunnery, to give last second training for the crew.

For over three months, the 3rd Brigade Combat Team “Greywolf”, 1st Cavalry Division, has been conducting Bradley Fighting Vehicle and tank gunnery qualifications at Rodriguez Live-Fire Complex in the Republic of Korea. For three months the master gunners from brigade down to company level have been neck deep in planning and executing all that entails to ensure the brigade is always at its highest level of readiness. But it hasn’t come without its set of challenges.

“As the battalion master gunner, my main duties is land, ammo and resource management for the battalion,” Brazel, the master gunner for 2nd Battalion, 7th Cavalry Regiment, said. “In addition to that, I prepare and train crews for their qualifications.”

The master gunner is the subject matter expert on a particular combat platform and serves as an advisor to the commander on how to best employ the weapon systems in battle to achieve the highest level of lethality. They also train crews to effectively operate the platform in various battlefield conditions. During gunnery, their tasks also include being able to train and retrain crews based upon trends they see within the unit, as well as advise the commander on personnel placement to create cohesive crews that will have longevity.

Most of the master gunners and a lot of the crews in Greywolf have conducted gunnery qualifications at Fort Hood. The difference between the ranges at Fort Hood and RLFC in South Korea posed some challenges for both the crews and master gunners. Namely, the size of RLFC.

“The range is short and narrow compared to what we are used to seeing at Fort Hood and we can’t shoot Sabot or AP rounds,” Brazel said. “At Fort Hood, with the space we have there, it forces our gunners and TCs to scan, it forces them to focus on switchology (changing from one type of round or weapon system to another, switching magnification, changing from day to thermal sites for example).”

But that wasn’t the only thing that challenged the crews here.

“RLFC has interesting terrain that challenged my more inexperienced crews,” Staff Sgt. Corey Troxell, master gunner for 6th Squadron, 9th Cav. Regt., said. “For example, tankers don’t have to shoot at elevated targets in Texas like they do here and there are small rises and falls that created issues for the Bradley crews engaging troop targets that didn’t allow them to get accurate range to target readings. It was a great opportunity to teach then apply the various methods of target engagement to fight your vehicle in varying battlefield conditions.”

In order to overcome some of these challenges related to the range, battalion master gunners made sure to focus a lot of their pre-gunnery training in the digital training systems across the peninsula.

“The digital systems helped us immensely here because we can focus on some of the skills that we are not able to due to the limitations of the range, such as switching between rounds and scanning across a wider swath of land,” Staff Sgt. Jacob Teague, the brigade’s master gunner, said. “We have Advanced Gunnery Training and Conduct of Fire Training systems that can support our crews at the range. At Camp Humphreys, they have Close Combat Tactical Training simulators that can accommodate an entire company.”

6-9 Cav was first in the chute for the Brigade in October and shared lessons learned to help improve the execution of the ranges as the months progressed.

“Being first to go we made sure to share our lessons learned with other units in the brigade. Most of it was on the small ‘range-isms’ that were unique to RLFC and Korea,” Troxell said. “For instance, the scenario to conduct gunnery does not follow the normal draw required for ammunition laid out within the Training Circular and must be planned off of the scenario built by 2nd Infantry Division.”

“We lost a lot of experience before we arrived on the peninsulas due to (permenant change of station) moves, schools, ETSing (expiration -time in service),” Teague said, “but I have been impressed by how quickly our crews have been able to reload and build the experience necessary to successfully qualify on their platform and sustain the qualification in a challenging environment. A lot of that credit goes to our master gunners across the brigade.”

It isn’t just the actively slotted master gunners, but also qualified master gunners who are now first sergeants or command sergeants major as well as experienced noncommissioned officerss that have stepped up to help.

“The brigade’s really come together and helped support each other,” Staff Sgt. Devin Sorensen, master gunner for 1st Bn., 12th Cav. Regt., said. “Myself and the (Brigade Engineer Battalion) master gunner have been running everyone through and helping the crews prepare. We also have people who are ready to go to Master Gunner School and are just waiting on school dates and are eager to become certified. They may not be qualified, but they have the knowledge and experience to help us get our crews trained and ready to go, which has alleviated some of the burden.”

Although there were many challenges to planning and executing a gunnery here, the master gunners all agreed that they did not present an obstacle to success. Many attributed this to the training they receive at the school house and the support they received across the brigade.

“When I was at the school house, they told us when we graduated that ‘hey you’re a J3 [the skill identifier for a Bradley master gunner], you’re not a master gunner until you get out on the range,” Sorensen said. “It’s just long days and late nights and getting after it to make sure your crews are ready and lethal.”