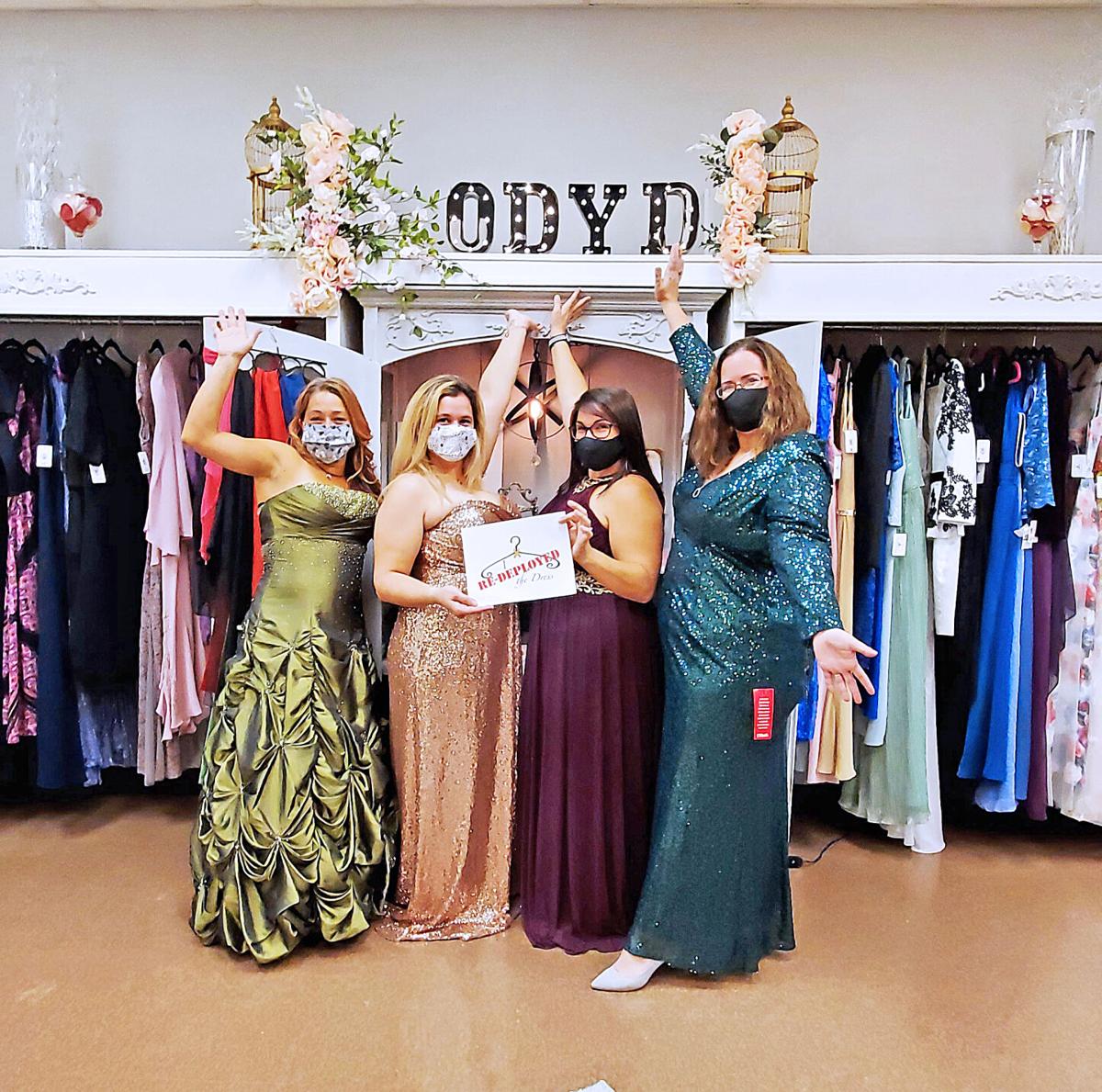 The first four shoppers inside the ODYD boutique during its grand opening Monday were Shari Jackowski, Dylan Screen, Rose Rohrer and Meriah Wail. 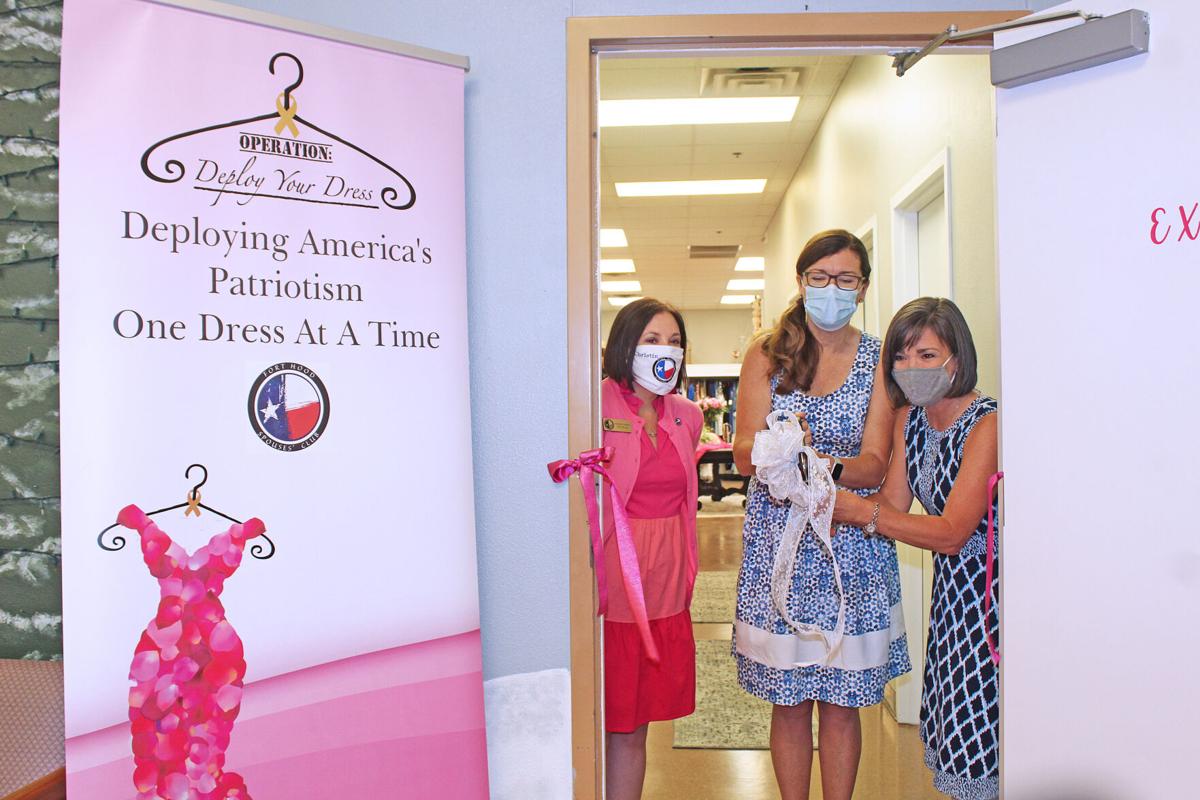 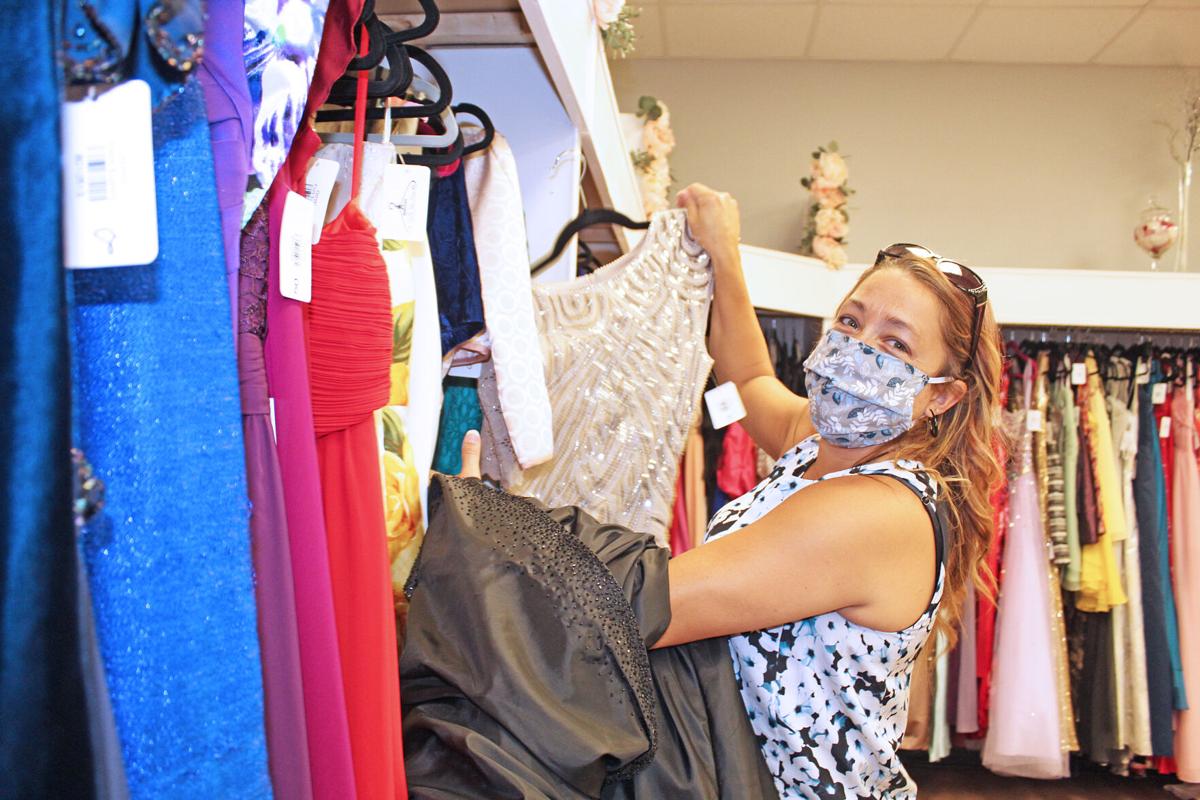 Shari Jackowski pulls a couple of gowns from the racks to try on during the grand opening of the Fort Hood ODYD boutique Monday.

The first four shoppers inside the ODYD boutique during its grand opening Monday were Shari Jackowski, Dylan Screen, Rose Rohrer and Meriah Wail.

Shari Jackowski pulls a couple of gowns from the racks to try on during the grand opening of the Fort Hood ODYD boutique Monday.

It was all glitz and glamour Monday as Operation Deploy Your Dress rolled out the red carpet for its ribbon cutting ceremony on Fort Hood.

“We open weekly and anyone with a valid military ID can get one dress free per year and one accessory,” Christin James, shop manager of the Fort Hood boutique, said. “They don’t have any obligation to return it, so it’s theirs free and clear.”

ODYD is a non-profit founded at Fort Bliss in 2015 as a dress swap. The Fort Hood Spouses’ Club was contacted about opening its own shop, making the organization’s eighth location across the country. With more than 1,000 dresses donated from around the world, the mission of ODYD is to help offset the high costs of formal events, especially for junior Soldiers, though gowns are available to all ranks.

“I think it helps build camaraderie on base and it helps going to these functions more affordable and fun,” James said.

She said the shop is available to “rent” for free if battalions, companies or small groups want to come in to dress shop before a ball. It also helps new spouses figure out what types of dresses they should be looking for when dress shopping for a military ball.

“It’s good for younger spouses who have never been to a ball and don’t really know what to wear and are also really nervous,” Dana Key, president of the Fort Hood Spouses’ Club, said.

James said the boutique has dresses in a variety of sizes and styles for every single body shape. She said some of the dresses are big and flowy, some are slinky, some are short and some even have trains.

Opening the shop was no simple task, as it took hundreds of volunteer hours, with James logging 280 hours alone. She received assistance from Fort Hood Spouses’ Club volunteers, as well as design and construction assistance from “Moving with the Military,” the Fort Hood-based home improvement show created, produced and hosted by local Army spouses Maria Reed and Chandee Ulch.

Reed heard about the project from Christina Hendrex, wife of Command Sgt. Maj. Daniel Hendrex, the former III Corps and Fort Hood senior enlisted advisor, and jumped at the chance to help out an organization that helps military families.

Armed with nine construction volunteers, consisting of spouses and children from the Reed and Ulch families, the crew built the closets the gowns hang from, built four dressing rooms, painted and helped with the final touches. Reed said they worked more than 150 hours between the nine volunteers.

“We were thrilled with the results. Knowing that for years to come ladies from around the world will be able to walk into those doors and for a moment feel like a princess and be doted over is why we get involve with things like this,” Ulch said. “Everyone needs a moment when they can look into a mirror and love who they see. Yes, the place is beautiful, but the place only reflects how we, at ‘Moving with the Military,’ see every military spouse, child, and service member, as someone special.”

Reed said the “Moving with the Military” episode featuring the Fort Hood ODYD will air in about two weeks. It can be watched on YouTube, Facebook and Farm & Ranch TV. Check their Facebook, https://www.facebook.com/movingwiththemilitary, for updates and some behind-the-scenes photos of the ODYD build.

To help generate buzz and excitement about the boutique, the Fort Hood Spouses’ Club asked people to enter a drawing to be one of the first four shoppers inside the boutique. The first four shoppers were Dylan Screen, Meriah Wail, Rose Rohrer and Shari Jackowski, who attended the ribbon cutting and started dress shopping immediately. Within the hour, the four ladies had found perfect gowns and “Re-deployed the dress.”

“It’s fun to dress up every once in a while,” Jackowski said. “We’ve all been in our yoga pants way too long.”

The Fort Hood ODYD is open Thursdays from 10 a.m. to 2 p.m. Appointments are required and can be made online. Visit the Fort Hood ODYD Facebook page, https://www.facebook.com/FortHoodODYD, for the link or directly to https://www.signupgenius.com/go/10c0a49ada729a5f58-fort.

Dress donations can be dropped off at the ODYD box outside Heart of the Hood Gift Shop or directly at the Fort Hood ODYD, located to the right of the Clear Creek Commissary (behind the trees).