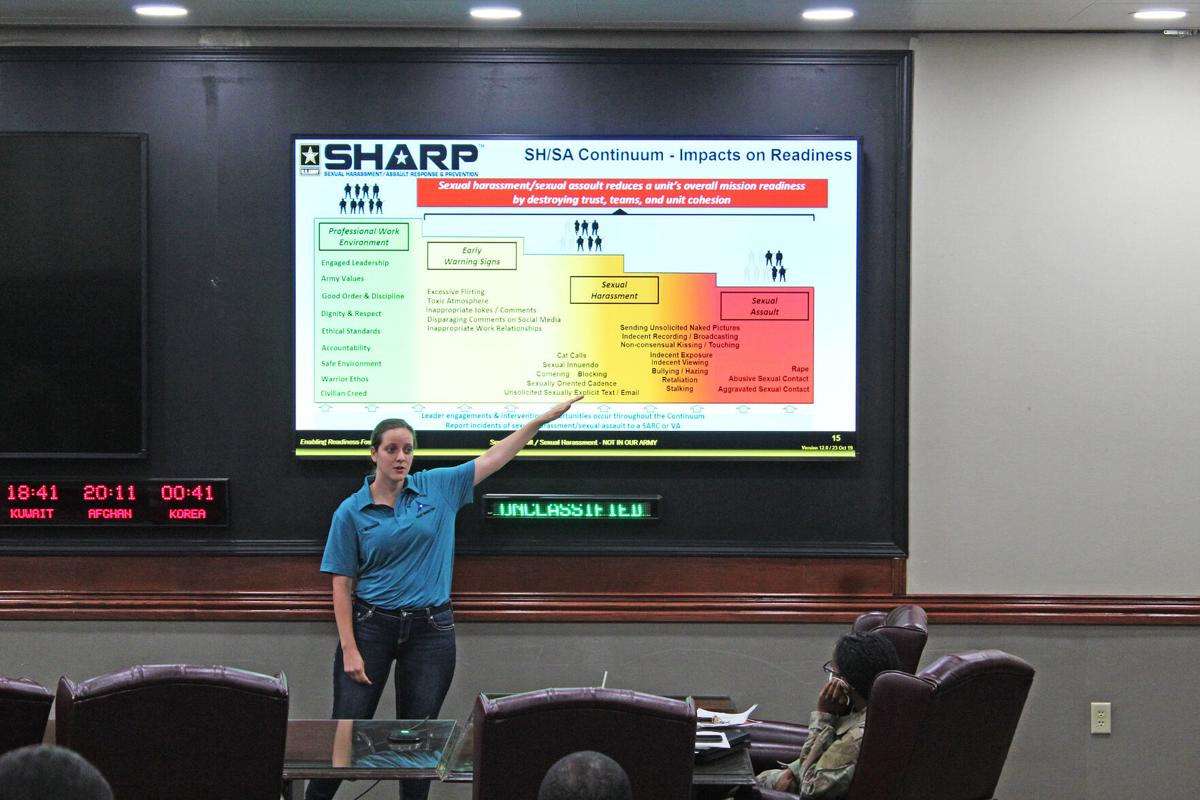 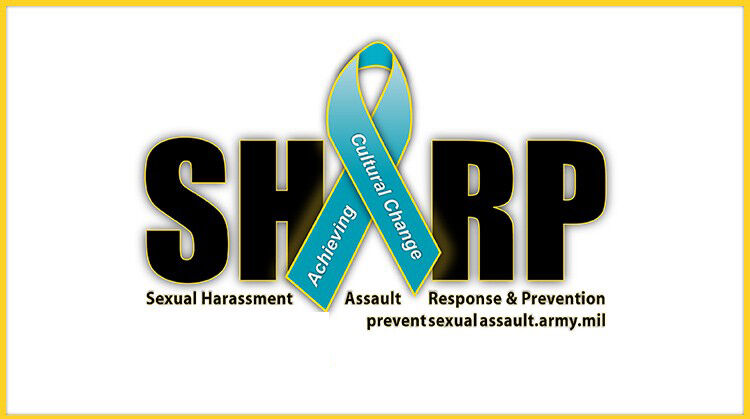 “If you’re living by the Army values daily, odds are you’re not gonna commit sexual harassment, you’re not gonna commit sexual assault,” 1st Lt. Brandy McGinnis told a group of Soldiers from 3rd Main Command Post – Operational Detachment during a SHARP class July 10 at III Corps Headquarters. “You’re gonna have honor, integrity and show others how to act through your actions.”

McGinnis serves as the III Corps and Fort Hood Sexual Harassment/Assault Response and Prevention program victim advocate, a difficult but ultimately rewarding position because she helps people through their darkest times and brings them back into the light.

In the aftermath of a sexual assault, a victim may have a wide range of emotions – from disgust, confusion, disorientation, emotionless, to even feelings of guilt.

“Or they could act completely fine. It depends on their response to trauma,” McGinnis explained. “I want them to know they’re not responsible for another person’s actions.”

McGinnis, who has been a victim advocate for two years, said the first thing a victim of sexual assault may want to do is take a shower and wash themselves clean, but that’s not what she would recommend.

Following a medical screening, which will allow medical professionals to collect evidence, check for sexually transmitted diseases or possible pregnancy, the hospital will encourage the victim to file a report.

“Even if they don’t want to report it, the case (and evidence) will still be on file if they change their mind in the future,” she explained.

Even with Army’s mandatory annual SHARP training, many Soldiers do not realize there are different reporting options and a variety of people they can report to, which can lead to Soldiers confused about who they should report a sexual assault to and the available reporting options.

McGinnis explained there are two types of reporting options for a sexual assault – restricted and unrestricted. While both reports are similar, unrestricted reports allow the Army’s Criminal Investigation Division to investigate the crime with an attempt to bring the perpetrator to justice in court.

As a victim sexual assault, a Soldier has access to medical care, behavioral health, victim advocacy, legal and counseling services. Depending on how the report, they also have the option of requesting a protective order and requesting a change of units or duty stations.

“A lot of misinformation has been thrown out there through the media, through people who became SHARP experts overnight,” she said, explaining that Criminal Investigation Command, not the unit, investigates sexual assault reports.

McGinnis explained that a victim also has the right to confidential communication. Victims requesting confidentiality cannot have their information released to others, including commanders or law enforcement personnel.

Staff Sgt. Michael Johnson, who sat in the 3rd MCP-OD training, said it’s pretty simple, “Think about how you would want to be treated and treat others the same.”

He believes SHARP training all comes down to leaders leading by example.

“It should be passed down from the highest to the lowest that this should not be tolerated in our ranks,” Johnson added.

Sexual harassment has a broad definition, which includes a victim being exposed to offensive materials, sexual advances, requests for sexual favors, offensive comments or sexual gestures, among others.

Sexual harassments can be reported through anonymous, formal or informal complaints. McGinnis explained an anonymous report can be something as simple as a note sent to the commander letting him or her know, for example, Sgt. Jane Doe has been sexually harassing her Soldiers.

McGinnis said, in her experience, commanders take the SHARP program seriously. At Fort Hood, she said the III Corps and Fort Hood command or deputy commander hold a monthly sexual assault review board, where they are briefed on current sexual assaults on the installation.

“We don’t give names, but that’s when every brigade commander comes in and briefs the DCG or commander about it,” McGinnis explained. “It makes people pay attention to their program.”

She said she always encourages people to fight back, make a complaint or file a report because that’s the only way change will take place. If a victim is uncomfortable with their unit SARC, file a report through another unit or to the III Corps and Fort Hood SHARP office.

McGinnis encouraged people to call the III Corps and Fort Hood SHARP office at 254-553-8395 with any questions, comments or suggestions to make the SHARP program better. For those wanting to file a report, the SHARP office is located at Bldg. 2242, at the corner of 58th Street and Support Avenue. They may also call the 24/7 SHARP Hotline at 254-319-4671.

Editor’s Note: This is part two of a five-part series the Fort Hood Sentinel is writing in regards to the Army’s SHARP program. The next article will focus on the CATCH program. If you are a victim of sexual harassment or sexual assault, reach out for help.