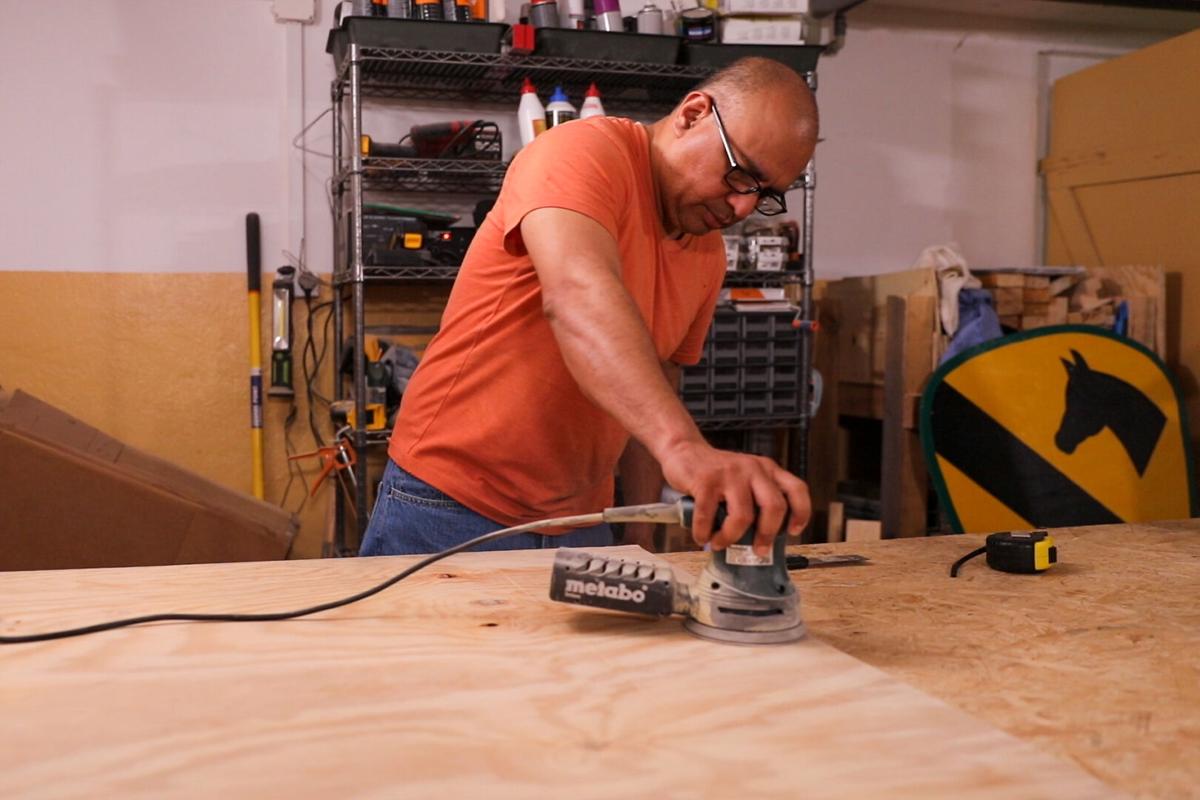 A plaque made by Staff Sgt. Luis Mendoza, 1st BCT, 1st Cav. Div., who uses his woodworking skills to make plaques and signs for his unit while on deployment to Żagań, Poland. 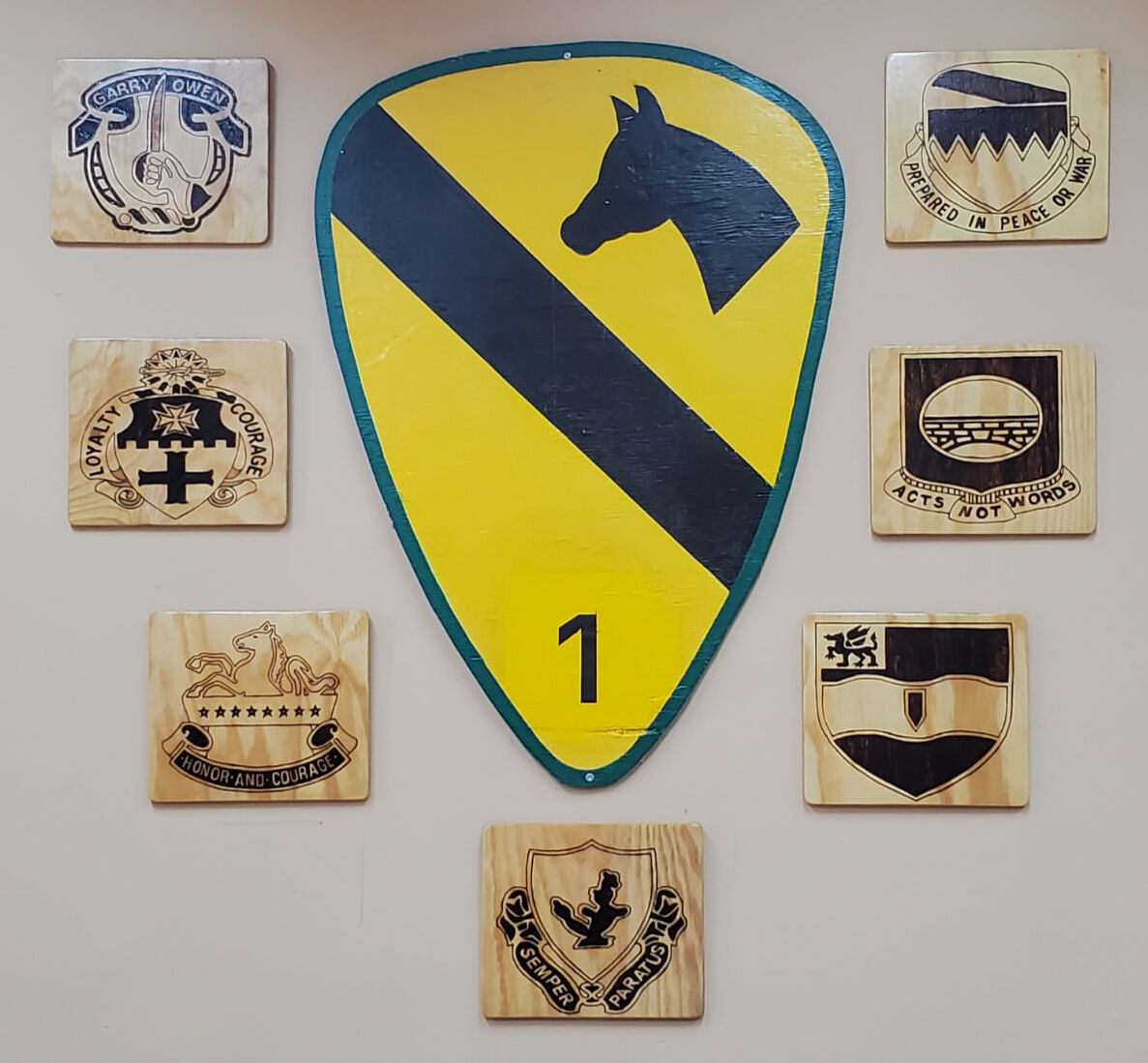 Wooden plaques and a 1st Cav. Div. sign hang on the wall in Żagań, Poland. These were made by Staff Sgt. Luis Mendoza, fragmentary order and tasking noncommissioned officer-in-charge assigned to 1st BCT, 1st Cav. Div., who spends much of his free time in his wood shop making various projects to assist his brigade.

A plaque made by Staff Sgt. Luis Mendoza, 1st BCT, 1st Cav. Div., who uses his woodworking skills to make plaques and signs for his unit while on deployment to Żagań, Poland.

Wooden plaques and a 1st Cav. Div. sign hang on the wall in Żagań, Poland. These were made by Staff Sgt. Luis Mendoza, fragmentary order and tasking noncommissioned officer-in-charge assigned to 1st BCT, 1st Cav. Div., who spends much of his free time in his wood shop making various projects to assist his brigade.

ŻAGAŃ, Poland — The sky is still dark when he turns off his alarm clock and climbs out of bed. After preparing for the day, he heads down to his workshop and flips on the lights in the basement of the barracks. This is where he’s spent countless hours cutting, burning and crafting — perfecting his woodwork.

For Staff Sgt. Luis Mendoza, an operations noncommissioned officer assigned to 1st Armored Brigade Combat Team, 1st Cavalry Division, going above and beyond his normal duties is a constant mind set. While also pursuing a desire to woodwork, he has found a way to improve his work environment.

He discovered his love for woodwork while serving overseas in the United States Army.

Mendoza’s passion for woodworking started on his first deployment in Afghanistan. He had seen a captain doing some woodwork, and the captain asked him if he was willing to learn. Mendoza didn’t realize at the time that it would become a passion and something he truly enjoys.

He appreciates the peace and tranquility that he experiences while in the workshop. To him, it never feels like work because it’s something he loves doing.

“I enjoy being in the workshop because it’s a way I can relax and de-stress,” Mendoza said. “When I come down here and do some kind of project, it’s like my life.”

Not only was it a great way to relieve stress, but over time his brigade has recognized his hard work and has supported his talent by gathering the resources he needed.

Because of the COVID-19 pandemic, finding wood became a big challenge for Mendoza due to hardware stores being closed. Luckily, he received help from his unit and was able to secure the wood that was needed for him to complete projects.

“It took me over two-and-a-half weeks to find a place to get wood,” he said. “Finally, a command sergeant major called me and said he was able to find it.”

Mendoza is currently deployed in Poland and has burned over 40 wooden plaques, constructed a podium and made a four-foot-tall 1st Cavalry Division sign.

Once he found a reliable source of supplies, he immediately started working on various projects. He said at first he began making battalion plaques to place on the wall, but then decided to start a larger project, building a new podium for his brigade. This would take him over three weeks and countless hours to finish.

“He’s my roommate,” Cremo said. “Sometimes on the weekend, Mendoza will be gone the entire day and then come back to the room and continue to work until two or three in the morning.”

Cremo also mentioned the influence Mendoza’s work has on his organization.

“I’d say it goes beyond our company level; I think he makes a brigade impact,” Cremo said. “He made the podium for the brigade and plaques for all the battalions.”

The extensive work that Mendoza puts into these projects is a reflection of the dedication he has to making his overall work environment a better place. He’s not obligated to take on these projects. He does it to make a lasting impression on his organization and to provide an example to the Soldiers around him. He wants to show them that hard work can make a difference.

“I don’t look for a reward,” Mendoza said. “This is my hobby; it’s what I like to do, and I’m the kind of Soldier who wants the best for his brigade.”

Mendoza has also passed on his love for woodwork to other Soldiers who are interested in learning. They join him in the woodshop after the work day is over, and he guides them through the process to help them expand their skill sets. Mendoza said that he doesn’t feel like it’s his job to teach other people, but if someone shows interest in the hobby, then he will gladly teach them what he knows.

For Mendoza, it is important to find a hobby or something to enjoy doing because it can help get through challenging times.

“If anybody has a hobby, you just do it,” Mendoza said. “When you’re deployed, it’s hard because you’re far from your family. It doesn’t matter what it is, if you’re enjoying it, you just go for it.”