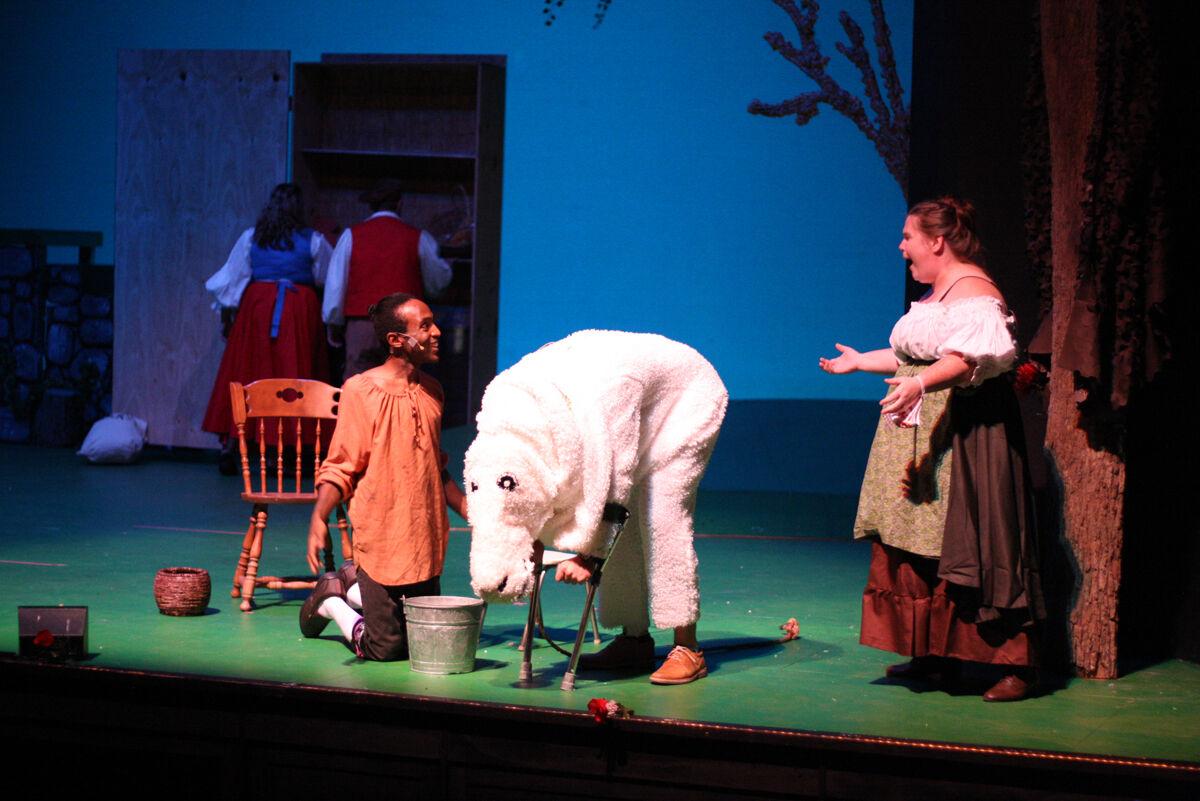 Cameron Dinkens plays Jack of “Jack and the Beanstalk,” Bronwyn Riggins plays Jack’s mother, and Elijah Atkinson plays Milky White the cow in the musical “Into the Woods,” which opens Friday at Vive Les Arts Theater in Killeen. 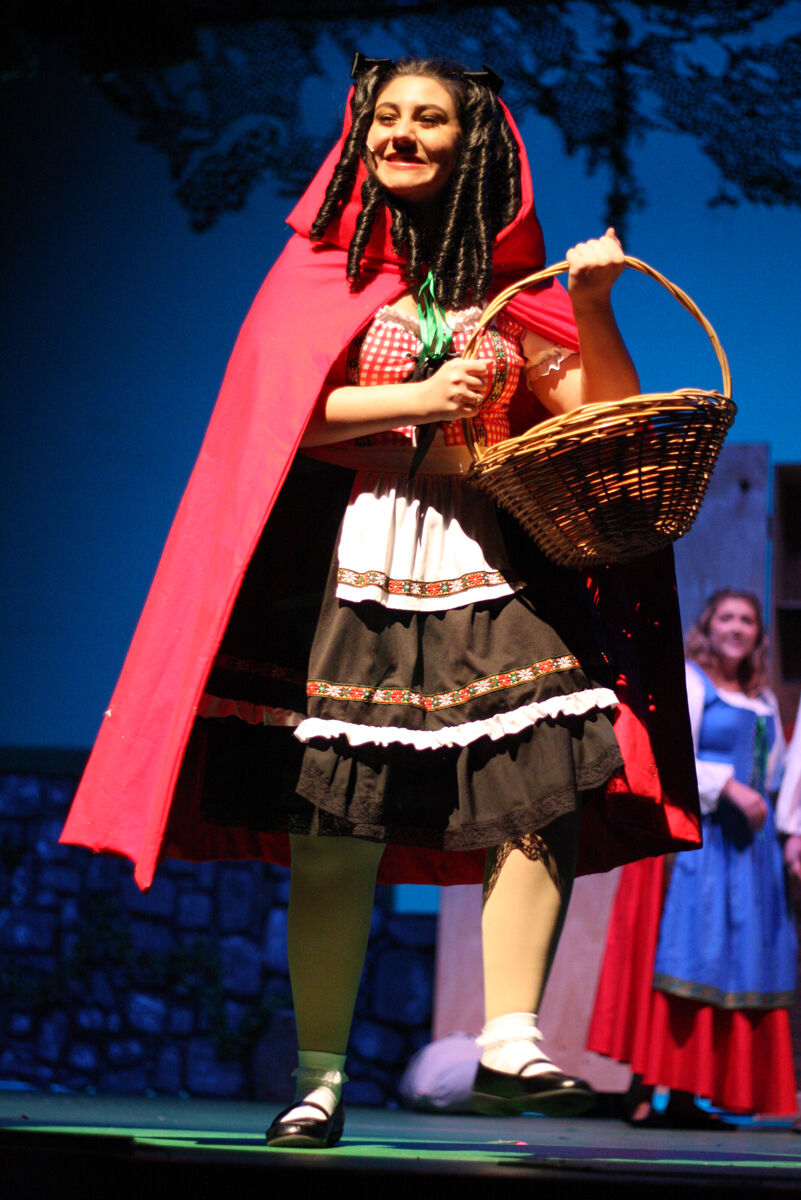 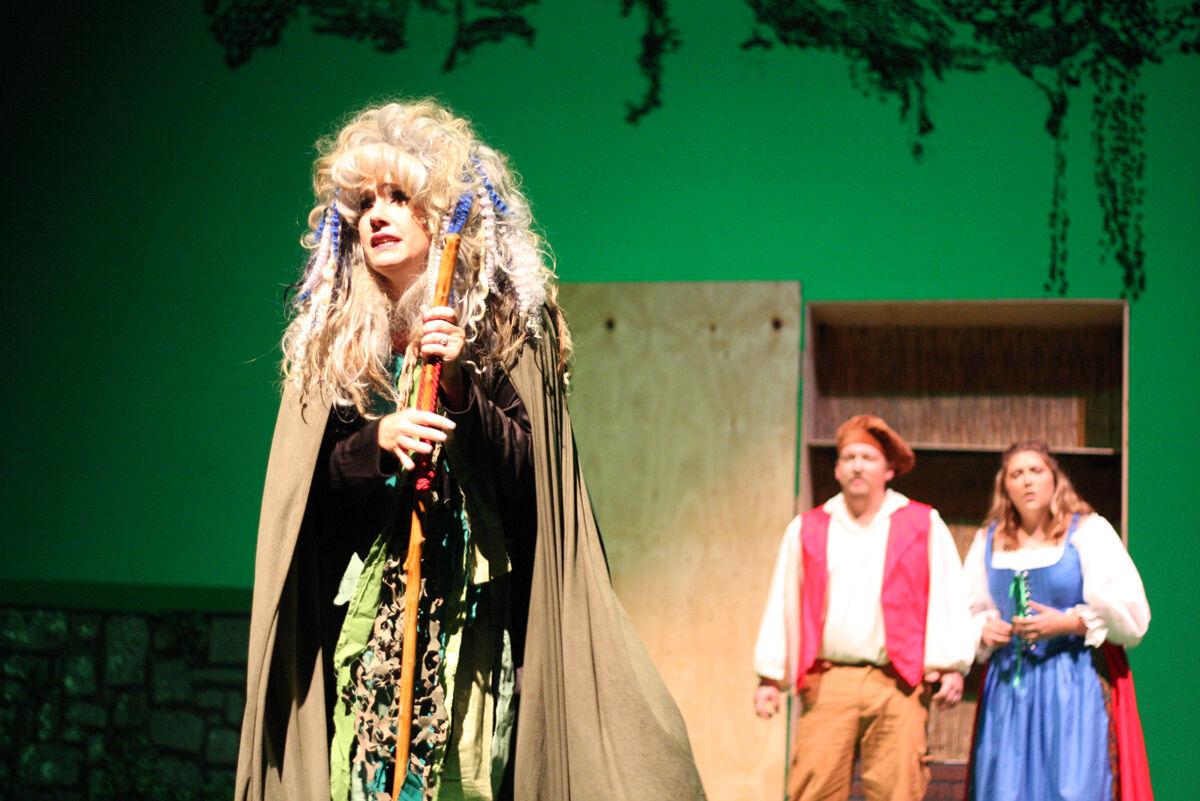 Leah Murelli stars as The Witch in the musical production “Into the Woods,” which opens Friday evening at Vive Les Arts in Killeen. Chad Johnson and Raychel Mynarcik play the Baker and the Baker’s Wife.

Cameron Dinkens plays Jack of “Jack and the Beanstalk,” Bronwyn Riggins plays Jack’s mother, and Elijah Atkinson plays Milky White the cow in the musical “Into the Woods,” which opens Friday at Vive Les Arts Theater in Killeen.

Leah Murelli stars as The Witch in the musical production “Into the Woods,” which opens Friday evening at Vive Les Arts in Killeen. Chad Johnson and Raychel Mynarcik play the Baker and the Baker’s Wife.

KILLEEN — The musical production “Into the Woods” begins this weekend at Killeen’s Vive Les Arts Theater. It’s a modern twist on the beloved Brothers Grimm fairy tales that follows the classic tales of “Cinderella,” “Little Red Riding Hood,” “Jack and the Beanstalk,” and “Rapunzel” – all tied together in an original story involving a baker and his wife, their wish to begin a family and their interaction with the witch who has put a curse on them.

It’s an award-winning production with music by the venerable Stephen Sondheim, and it wouldn’t be possible to produce without the passion and hard work of Soldiers, and military family members stationed at Fort Hood, according to Jami Salter, executive director of Vive Les Arts Theater.

1st Lt. Stephanie Smoot, assigned as the battalion human resources officer for the 62nd Engineer Battalion, 36th Engineer Brigade, is one of those Soldiers from the Great Place with a passion for acting, who is involved with this production as the director. While she’s new to Fort Hood, acting has been a lifelong pursuit.

“I grew up doing theater my whole life from age six to 18,” Smoot said. “And then I went off to West Point and wasn’t able to do it as much, but I got to cheer for West Point, so I had different outlet. And then we were stationed at Fort Benning. There wasn’t a community theater there. We saw some professional shows, but there wasn’t any local community theater. We moved here and found Vive Les (Arts) almost right away. We jumped right in and got involved. I choreographed the last show, directing this one, and then I’m going to take a break and hopefully do some shows later this season and be on stage myself.”

She and her husband just arrived to Fort Hood early this spring, but were welcomed to the local theater with open arms, she said.

“It’s been really great, because they just kind of deal with our work schedules,” Smoot said. “I’m like, ‘Hey, I can’t make it,’ or, ‘I have a meeting,’ or, ‘We have training.’ They just deal with my work schedule and sort of work with me and have been really flexible.”

Working around the schedules can, indeed, be challenging, Salter agreed.

“The last show that I directed was in February. It was called “Alabama Story,” and one of my lead actors was in the military … About halfway through rehearsals, he’s like, ‘I have to go to school. And I can’t postpone it, they won’t let me do it again. I have to go.’ So, he disappeared on us for two weeks, which we worked around, and it was no big deal,” Salter said. “The show itself was set with little stories with groups of people kind of like this one, so his group just held off until he got back and then we focused real hard on them when they came in. So, sometimes the military is demanding … But the rewards are endless.”

Both Smoot and Salter are thrilled to have a place so close to post where Soldiers can have an artistic outlet.

“Obviously, the military is a very technical pursuit,” Salter explained, “and there’s not a whole lot of arts on post, simply because of what they do, and so this is a great outlet. It’s wonderful to see people who have this very military mindset of duty and rigor and structure to come here and sort of be able to release those bounds and restraints and be able to come in and really focus on arts.”

Nearly half of the cast has ties to Fort Hood, and all of their artistic abilities focused now on “Into the Woods,” which opens Friday with the first show at 7:30 p.m.

The first half of the show is really magical,” Smoot said. “It’s all the classic stories. You think you’ve reached the climax, and it’s the happy ending, and then Act 2 just blows you away. So, it’s sort of the opposite. But it’s interesting because it talks a lot about personal struggle, things you can’t control, placing blame on outside forces, and how we all deal with conflict in our own ways. It feels like it’s very applicable to everything that’s going on right now in the world.”

More information about the show and tickets to see it are available at www.vlakilleen.org.

The musical production “Into the Woods” begins this weekend at Killeen’s Vive Les Arts Theater at 7:30 p.m. Friday.