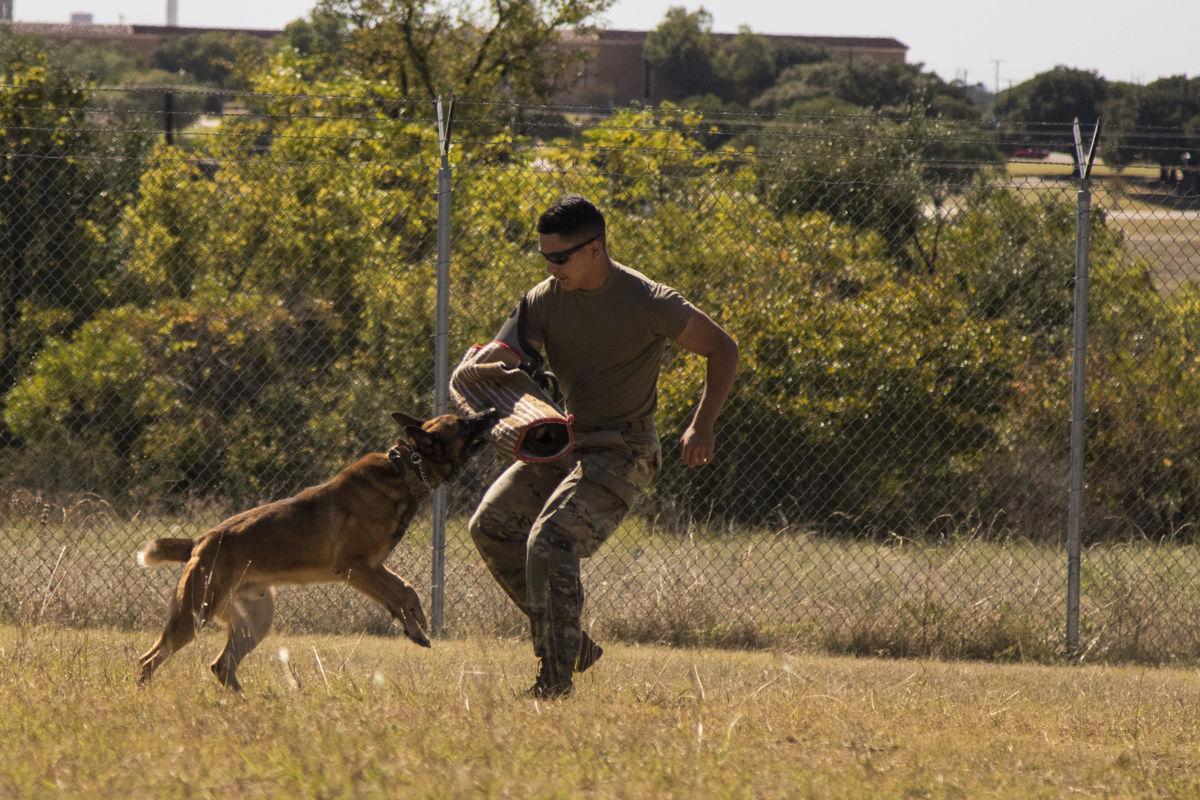 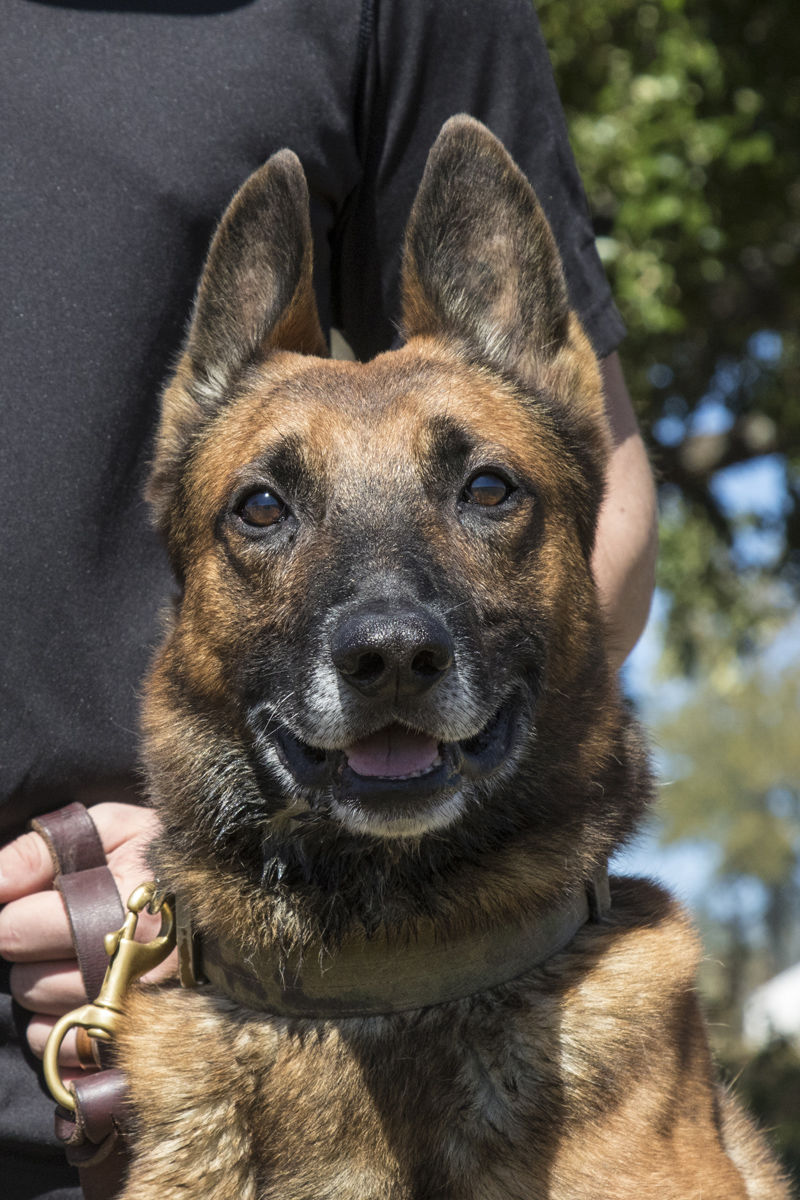 Edo is an 8-year-old military working dog with the 226th MP Det. at Fort Hood. 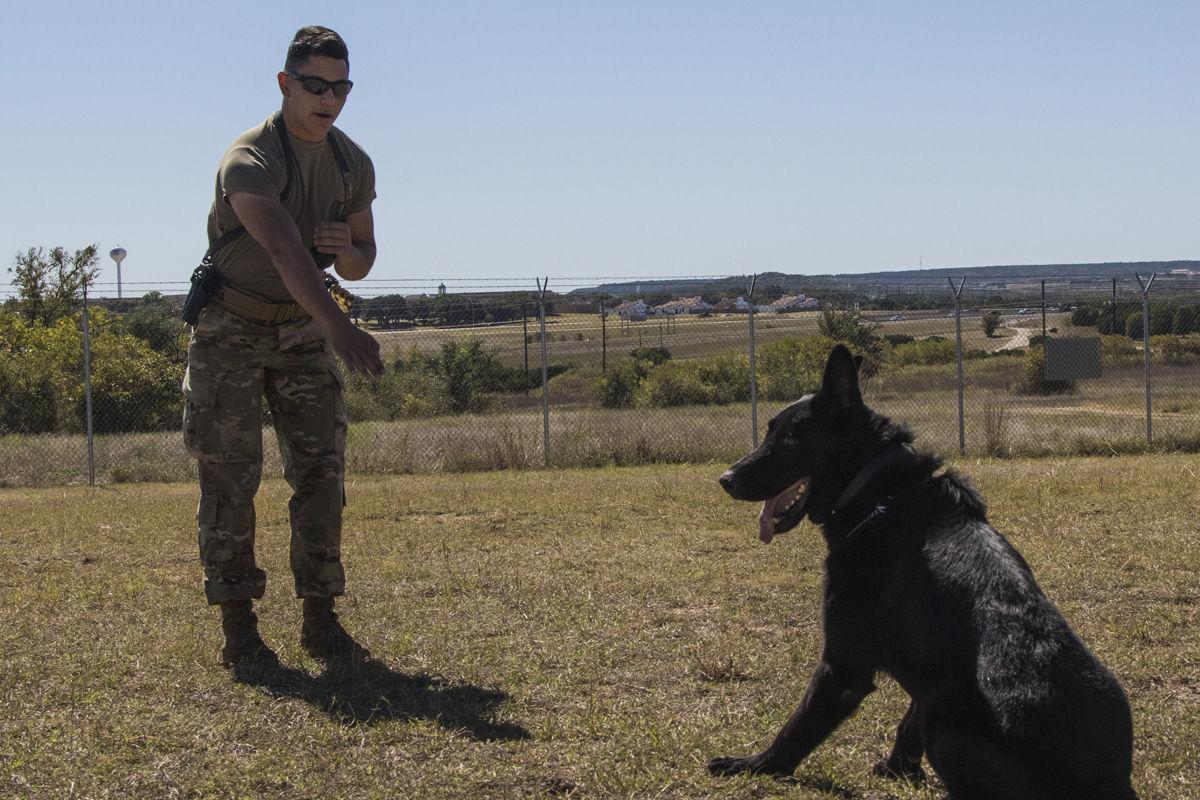 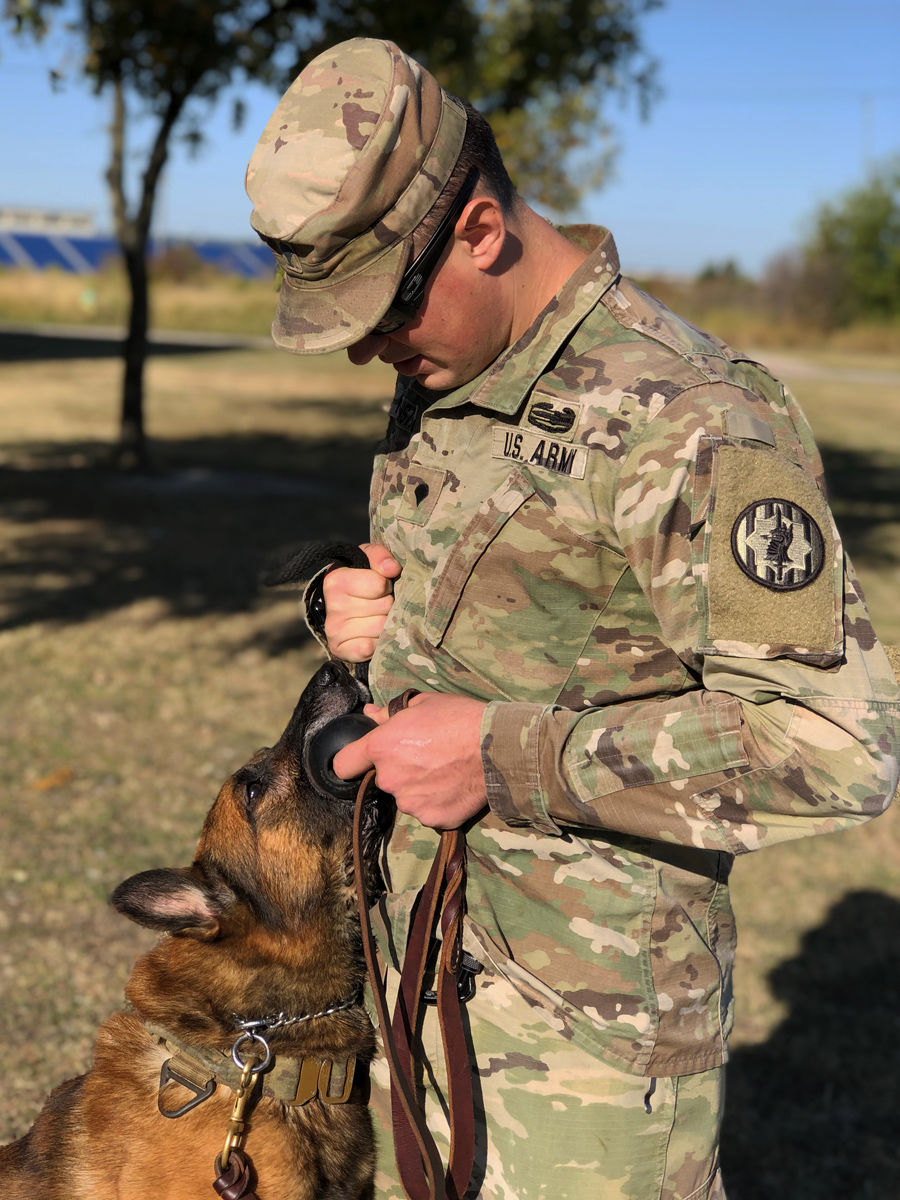 Spc. Garrett Hottenstein plays with his military working dog Edo Oct 22. Dog handlers give positive reinforcement to their dog to help create and nurture a bond needed to work together.

Edo is an 8-year-old military working dog with the 226th MP Det. at Fort Hood.

Spc. Garrett Hottenstein plays with his military working dog Edo Oct 22. Dog handlers give positive reinforcement to their dog to help create and nurture a bond needed to work together.

Following in a father’s footsteps is something that many men have done throughout time, but Spc. Garrett Hottenstein followed a different route, which lead him to the same calling as his father – as a working dog handler.

Hottenstein is a military working dog handler, a position that came naturally since he remembered watching his dad work with canines for the Platteville Police Department in his hometown of Platteville, Wisconsin.

The 22-year-old Fort Hood Soldier, with the 226th Military Police Detachment, felt a calling to serve in the military, just as he felt a calling to center that military service on his love for man’s best friend. Hottenstein’s best friend and partner is Edo, an eight-year-old Belgian Malinois, who has been by his side since he arrived at the Great Place.

“Besides basic training and AIT (Advanced Individual Training), I have always been with Edo,” he said. “He was, and is, my first dog as a dog handler.”

The beginning was tough for the duo, Hottenstein revealed. Edo had several handlers before him who were unable to train him to the level of obedience to meet the Army standard.

“He is like this grumpy old man,” he said, describing Edo. “Edo had an alpha mentality and he learned that he could be in charge from his previous handlers. It took almost two years before I think we reached that mutual relationship where we worked great together. And our bond is even stronger because of it.”

Capt. Jonathan Falk, commander of the 226th MP Det., said that dog handler teams share a unique bond, one that is shaped through the assignment of a dog to its handler, based on the personalities and skill levels of both the dog and the handler.

“It needs care and attention in order to be an effective tool that keeps you and your battle buddies alive,” Falk explained. “The difference is, obviously, that the dog is a living being that requires significant amounts of time, training and emotion to master, while providing an entirely unique capability.”

If someone wants to be a dog handler, they can’t be afraid to get bit, Hottenstein said with a smile. A handler can train their dog well, but the dog may still want to play aggressively. Hottenstein explaind that caring for a military working dog is different than owning a pet. Edo knows he has a job and they respect each other and they begin read each other’s body language.

A dog handler can notice small changes in their dog’s behavior. Being with one dog for so long, Hottenstein can pick up on minor signals that Edo is giving off to tell him if something is about to happen. The hair on the dog’s back or the positioning of the dog’s ears can be indicators that there is something wrong and the handler can alert those around to react accordingly.

That type of silent communication helped Edo and Hottenstein save lives while deployed to Eastern Afghanistan in 2017. The duo was attached to multiple special forces groups when their team would be tested. Their compound came under attack by rockets, when it was observed that one didn’t detonate and bounced where no one could locate the unexploded ordnance. Hottenstein and his trusted partner sprang into action.

Hottenstein knew that he could trust Edo’s nose. With an acute sense of smell, five to 10 times stronger than a human’s nose, working dogs can detect small traces of explosives or drugs and alert the handlers of their presence. After scouring the perimeter, they located and detonated it in place.

Now in his fourth year in the Army, Hottenstein is faced with a few new decisions. He has decided that he will be transitioning out of the Army, but one decision that was an easy one to make for him was finding a way to keep Edo in his life. He said letting Edo leave his side is one decision he won’t make lightly.

“I would be broken up about leaving Edo,” Hottenstein said. “I know people in the canine units that say, ‘Don’t get attached to your dog,’ but how can you not?”

The average age for military and police working dogs is around 10 years. At 8-years-old, Edo, may be eligible to retire if there isn’t a suitable handler to take him.

“For every military working dog, when it comes to retiring, they will be offered up for adoption, with their handlers getting priority,” Hottenstein said. “The handler who deployed with the dog, then who may have been the handler the longest. However, there is no guarantee that he will be able to keep his faithful friend.”

Hottenstein is looking into ways that he can adopt Edo and continue to care for him just as he has done for the majority of his time in the Army.

“You should never split up a dog team,” Hottenstein said. “You form a bond and you click. You have to care for them. I’ve worked with him for the last four years and to me he’s no different from family.”