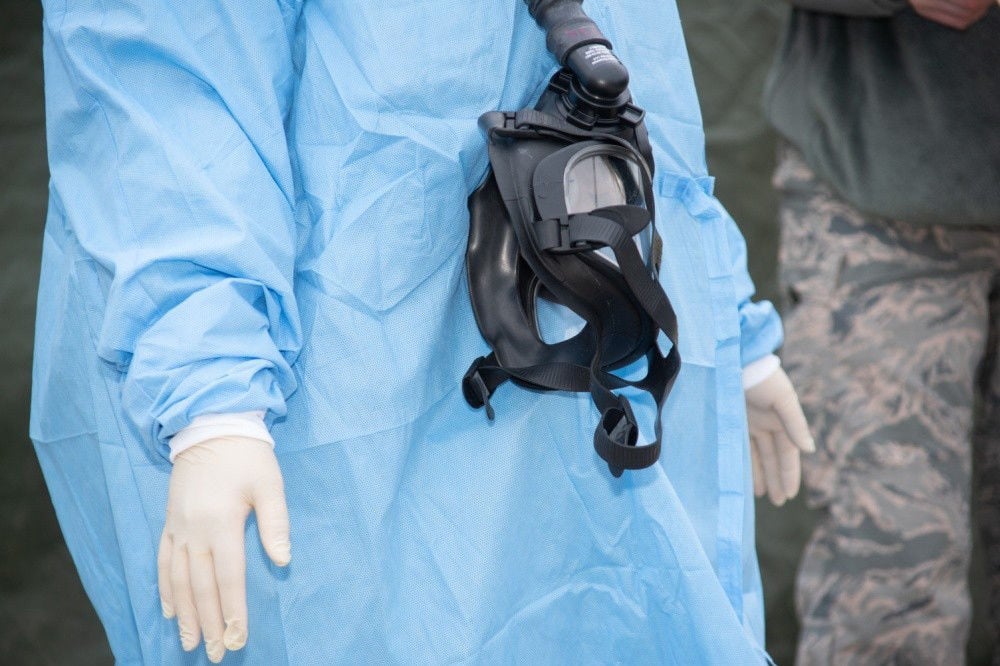 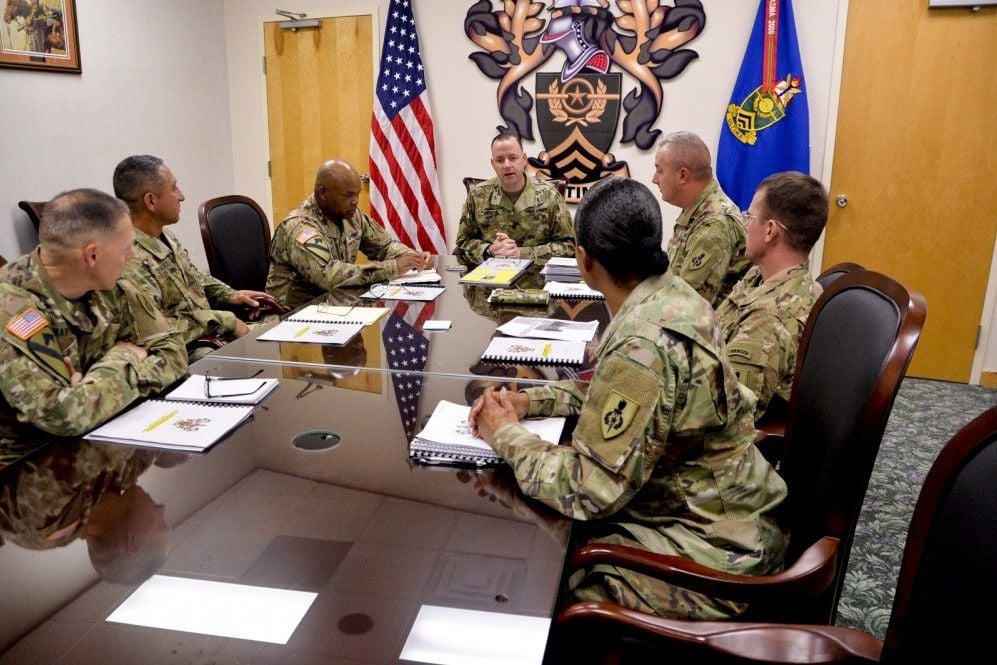 Command Sgt. Maj. Michael Henry the deputy commandant of the NCO Leadership Center of Excellence meets with representatives from all of the Sergeants Major Course departments to discuss shaping and driving the institution when it comes to talent management and the use of the Order of Merit List Nov. 19. 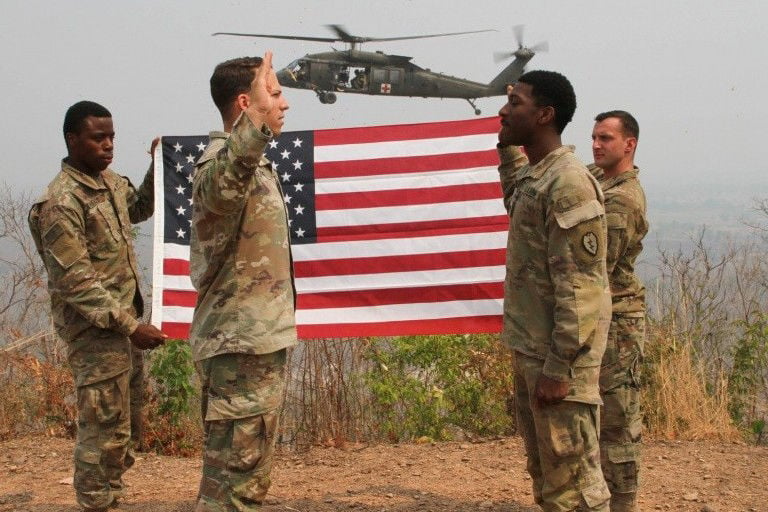 Command Sgt. Maj. Michael Henry the deputy commandant of the NCO Leadership Center of Excellence meets with representatives from all of the Sergeants Major Course departments to discuss shaping and driving the institution when it comes to talent management and the use of the Order of Merit List Nov. 19.

WASHINGTON — Army leaders announced new reenlistment and promotion policies that will last until Sept. 30, as the COVID-19 pandemic continues to change how the military operates.

“In response to COVID-19, we’ve made some important changes to enlisted promotion and retention policies to take care of our people and keep our Army ready,” Sgt. Maj. of the Army Michael Grinston said. “We are taking unprecedented and immediate action to keep the right people in the right rank when we need them most.”

The initiatives include short-term reenlistment opportunities, virtual promotion boards and halting certain qualifications that are all intended to “protect the force and preserve readiness,” Sgt. Maj. Stuart Morgan, the Army’s career counselor, said.

“It’s unknown if the COVID-19 outbreak is going to end two weeks from now or six months from now – or even longer,” Morgan continued. “It’s a constant analysis we go through; we are reevaluating the environment and identifying the operational environment that we’re in.”

To date, the Army has at least 288 confirmed cases of COVID-19, which include 100 Soldiers, 64 civilian employees, 65 dependents, nine cadets and 50 Army contractors.

Roughly 9,000 Soldiers are within six months of leaving the Army and now eligible for short-term reenlistment, Morgan said, with extension options available from three to 11 months.

Interested Soldiers must get approval from their commander. The initiative was sparked by the COVID-19 pandemic, Morgan said, and intended to bridge the gap between separating Soldiers and those who committed to 12-month reenlistments or longer.

“We learned Soldiers wanted to continue their service,” Morgan said, “but some were unable to commit to an entire year or longer.”

Previous reenlistment options for Soldiers start at 12 months or longer, with some contracts that include bonuses worth up to $80,000. There are no bonuses included with these new, short-term reenlistments.

The benefit of these reenlistments, however, is to give Soldiers financial stability during an uncertain time.

“Many Soldiers were preparing to transition out, but their civilian job opportunities disappeared,” Morgan said, while the COVID-19 outbreak has slowed the economy. Last week, more than 3 million Americans filed for unemployment.

“The Army understands the [economic] environment right now,” Morgan said. “We’re not just going to push a Soldier out to the front gate and say ‘good luck.’ A job that may have been available two weeks ago has now disappeared.”

This initiative is a chance for the Army to take care of its people, he said.

But with travel restrictions in place, conducting these critical promotion boards can be challenging, he said. However, Army leaders have empowered battalion commanders to assess these risks, and adopt virtual promotion boards “as a means to mitigate that risk,” Clark said.

In other words, for the next six months, battalion commanders are empowered to conduct virtual personnel boards instead of meeting troops in-person. These commanders will also have the liberty to choose how their boards are conducted.

“Commanders can either do a normal monthly promotion board or if their command is decentralized, they’ll do the virtual boards,” Clark said. “Battalions may have Soldiers located in different states or different areas where traveling would be required to attend.”

In addition to virtual promotion boards, Professional Military Education, or PME, requirements have been halted for Soldiers in the Advanced Leader Course and Senior Leader Course. Those affected will enroll on a later date.

“We don’t want Soldiers to leave their homes and be in a mass population in an attempt to get trained,” Clark said. “So again, this is another opportunity to mitigate the risk.”

Some Soldiers will complete their requirements through distance learning, like troops enrolled in Basic Leader, Master Leader and Sergeants Major courses.

Although Soldiers must still pass their Army Physical Fitness Test, or APFT, to rank up, they can use their last APFT score for these purposes, he said. This interim change is also applied to their weapons qualifications.

“Soldiers with an expired APFT would normally lose their promotable status, but we’ve taken those expiration dates and extended them so their commands don’t have to worry about putting their Soldiers at risk,” Clark said.

If troops are fully qualified to promote, except for their PME requirements, he said, they will receive a full promotion and will have until their next rank to complete their required schooling.

Army leaders are taking care of their Soldiers, Clark said. “It’s in line with the chief of staff of the Army’s top priority. We are developing policies to help commanders protect our people.

“We have some of the greatest weapon systems the world has ever seen,” he continued. “But those weapon systems don’t mean anything without the people. We have to make sure we keep people first because people are our key to win as a team.”