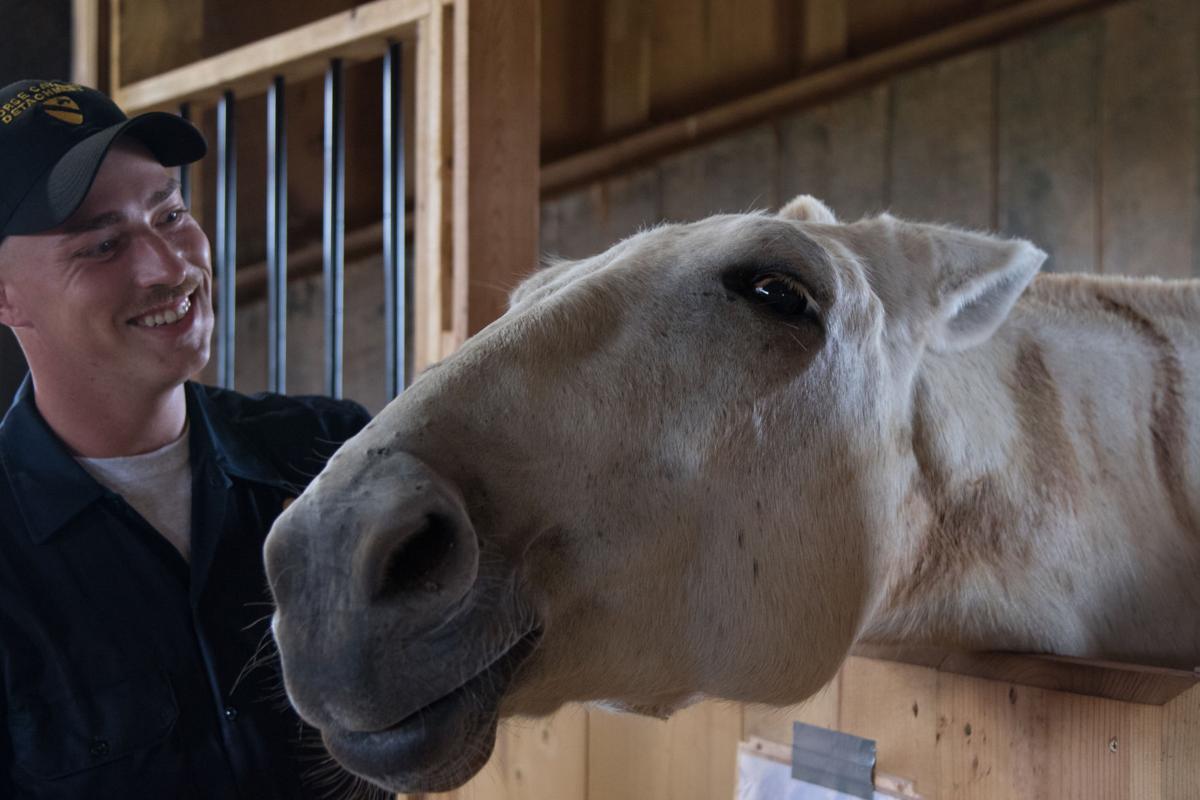 Spc. Cody Person, a Soldier of the Horse Cav. Det., 1st Cav. Div., takes a moment to settle in his mule, Travelor, Sept. 24 at Fort Reno, Oklahoma. They competed in the Wheeled Competition. 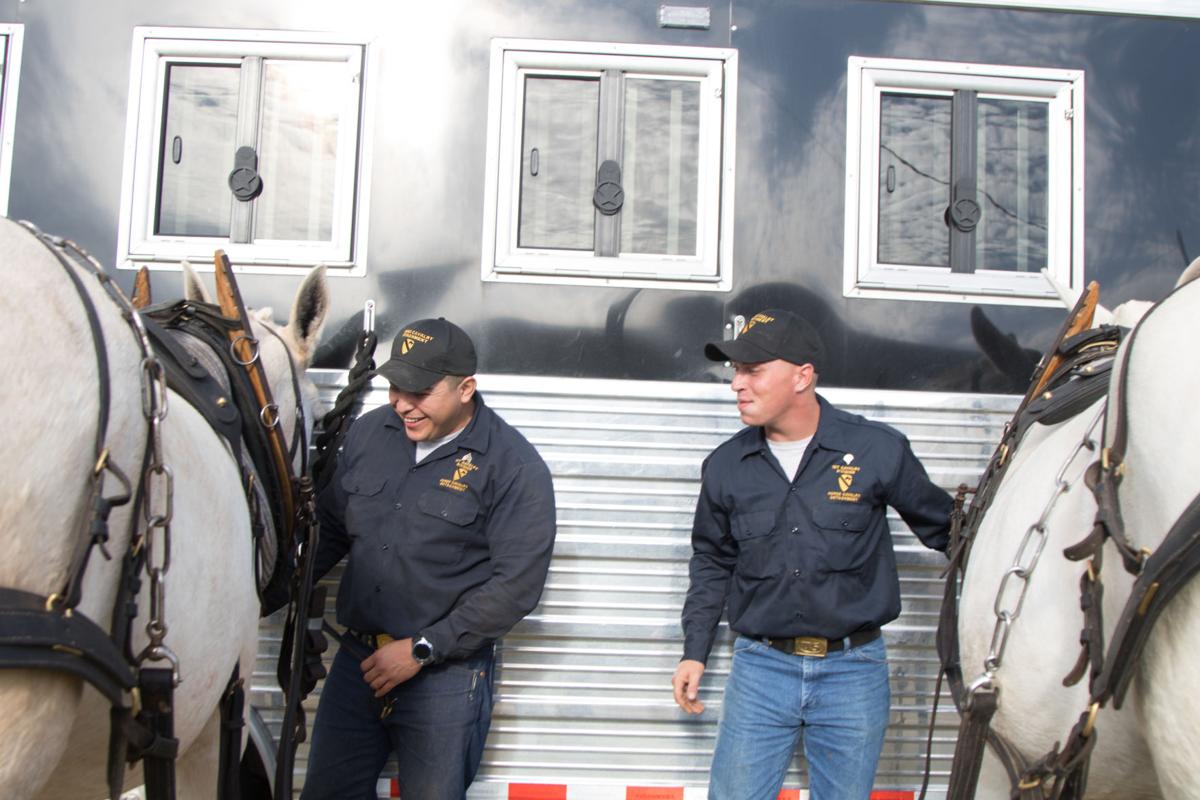 Sgt. Ruben Rodriguez and Spc. Cody Person, the Repair and Utilities team with the Horse Cav. Det., 1st Cav. Div., share a laugh while tending to their mules Sept. 28 at Fort Reno, Oklahoma. The team competed at this year’s National Cavalry Competition in the Wheeled Competition and took home the first place blue ribbon. 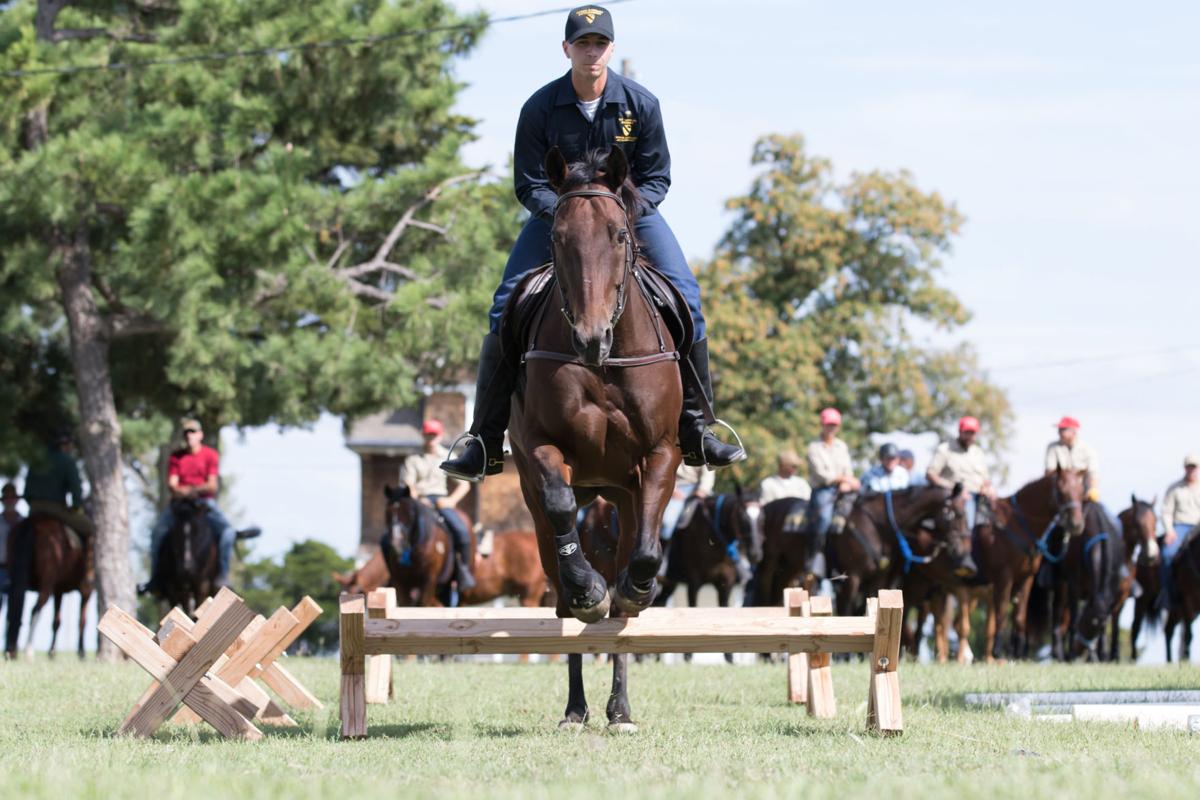 Soldiers of the Horse Cav. Det., 1st Cav. Div., compete at this year’s National Cavalry Competition at Fort Reno, Oklahoma. The Horse Detachment received several ribbons, including a blue ribbon for the Wheeled Competition with their new mules Trudy and Travelor.

Spc. Cody Person, a Soldier of the Horse Cav. Det., 1st Cav. Div., takes a moment to settle in his mule, Travelor, Sept. 24 at Fort Reno, Oklahoma. They competed in the Wheeled Competition.

Sgt. Ruben Rodriguez and Spc. Cody Person, the Repair and Utilities team with the Horse Cav. Det., 1st Cav. Div., share a laugh while tending to their mules Sept. 28 at Fort Reno, Oklahoma. The team competed at this year’s National Cavalry Competition in the Wheeled Competition and took home the first place blue ribbon.

Soldiers of the Horse Cav. Det., 1st Cav. Div., compete at this year’s National Cavalry Competition at Fort Reno, Oklahoma. The Horse Detachment received several ribbons, including a blue ribbon for the Wheeled Competition with their new mules Trudy and Travelor.

Rushing into his seat amidst the low thunder of drums, a boy looks out onto a brightly lit field. He finds it filled with Soldiers from across American history. Each uniform made with stunning detail, from the cool dark blues accented with gold from the Civil War, to the earthy browns and tan, marking the Soldiers who embarked for foreign shores – each of them placed atop a trusty steed. They are the living legacy of U.S. cavalry. As canons boom, the cavalry fill the stadium with hoof beats and gun smoke, as well as the memories of one Cody Person.

“I used to go to the cavalry shows and rodeos as a kid,” Spc. Cody Person, a member of the Horse Cavalry Detachment, 1st Cavalry Division’s Repair and Utilities team, said. The night his team won multiple accolades during this year’s National Cavalry Competition. He said the nights he watched rodeos and cavalry demonstrations, he never thought he’d be a cavalryman.

Person, a Killeen native, got the opportunity to represent his company in the Wheeled Competition, where contestants had to drive a mule pulled cart without breaking a pace over a trot in the fastest time. He and his supervisor, Sgt. Ruben Rodriguez, R&U Team Leader, Horse Cav. Det., took home the first place blue ribbon this year. Working tirelessly to earn the trust of their new mules, Trudy and Travelor, the duo drove them not only in the competition, but on various rides over the week.

With the skill and dedication that the young cavalryman drives his mules, one would think, that it’s the only skill he’s trained, but Person puts himself into everything he does. Before joining the horse detachment, he was a UH-60 Black Hawk mechanic with 2nd Battalion, 227th Aviation Regiment, 1st Cav. Div. While there, Person developed a philosophy that he brought to his new team.

“As a Black Hawk mechanic in the Air Cav. world, I feel you need to take your job twice as serious,” he said. “Once that helicopter is in the sky, there’s no stopping it and saying ‘Hey, stop I need to fix this,’ if you mess up, you’re putting lives at risk. To me, you need to be able to put yourself on that aircraft after you work on it. It’s the only way you’ll trust your own work.”

This type of mentality is one that was instilled at the same early age as his wonder for the horses and the cavalry.

“I was brought up like this. My folks taught me to take pride in your work,” he said. “It reflects on you. For example: your first sergeant might say, ‘Hey, you messed this up, you need to go back and fix it’ or they might say, ‘This is a really good job,’ so my dedication really comes from taking pride in what I do. From when I was six or seven, I worked in my grandfather’s stable, cleaning up after the horses. It gave me a lot of respect for hard work and taught me to get the job done right.”

Coming from a background involving horses, Person jumped on the opportunity to work with them again, saying goodbye to his family at 2nd Bn., 227th Av. Regt., 1st Cav. Div., and embracing the horse detachment.

“Working at Horse Cav. is something that immediately caught my interest – it’s a once in a life time opportunity,” he said. “I think it’s an honorable position. Not everybody gets to ride horses in parades, competitions and demonstrations to uphold Army tradition. It’s not something I couldn’t pass up.”

However, the road to being a team member wasn’t all roses. Person had his doubts about joining the detachment.

“I almost quit the horse detachment twice,” he said, “One of the biggest things holding me back was the idea of missing out on family time. The detachment works a lot of weekends and does shows all over. Now, being from Killeen and being so close to my family, I realize not a lot of Soldiers get the chance to do that. The idea of losing out on that opportunity started to push me away, but a lot of people around here rallied around me to stick with the team. I’m really glad I did because it’s not as bad. I still make time for family.”

Dedicated not only to his work and his family, Person has built himself a hard-working persona among the America’s First Team. Rodriguez, Person’s supervisor, has been watching him since he arrived at the detachment.

“From the moment he decided to stay and joined my squad, he has been a hard worker and highly motivated in everything he does,” he said. “He’s full of initiative. In the maintenance squad, you see who really wants to be there and who doesn’t. We hold the most physically demanding job, in that we are constantly outside and moving all around the detachment to make sure it’s running in top condition. It can be a tough job.”

Rodriguez believes that, beyond his grit in the job done, Person has something more to him that makes him a worthy muleskinner. He has worked patiently with all of the Horse Cav.’s mules and displayed an understanding of them in Rodriguez’s opinion.

“He always tells me that he’s striving to ride on horseback, but working with the mules is not for everyone,” he said. “If the mules don’t like you, you’ll never be able to work them and the mules respect him and have taken to him. That’s why he’s on the wagon and that’s what put him here at the competition.”

Speaking of the competition, Person hasn’t let his win and time away from his team change him. He’s been bringing his ‘A-game’ in horsemanship and in leadership, according to Rodriguez.

“Person is full of selfless acts,” he said, “Even during this competition, while the team is performing, he’s saying things like ‘Hey sergeant, let’s go get lunch for all the guys’ and things like that. He’s always thinking about the team first and himself last.”

Person’s partaking in the competition happened early on, but even after his course was concluded, he knew it wasn’t time to hang up the reigns. He helped his team stay focused by helping take care of camp while they competed.

When the team finally came together again and was awarded for their efforts during the competition, Person took some time to reflect on the night and how far he had come. From being a child of Texas that fell in love with the look of horses and military tradition, to a U.S. cavalryman himself, he said that he never thought he would be standing there, taking home a first place ribbon on his very first competition.