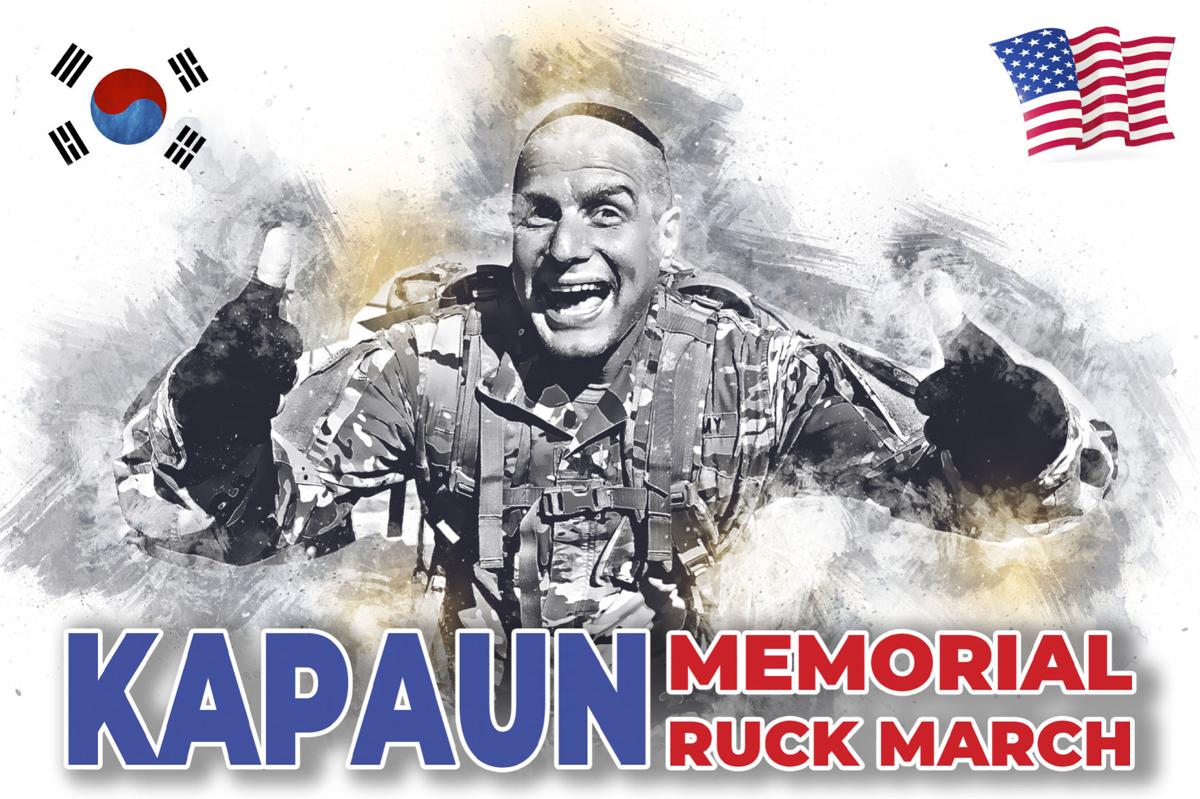 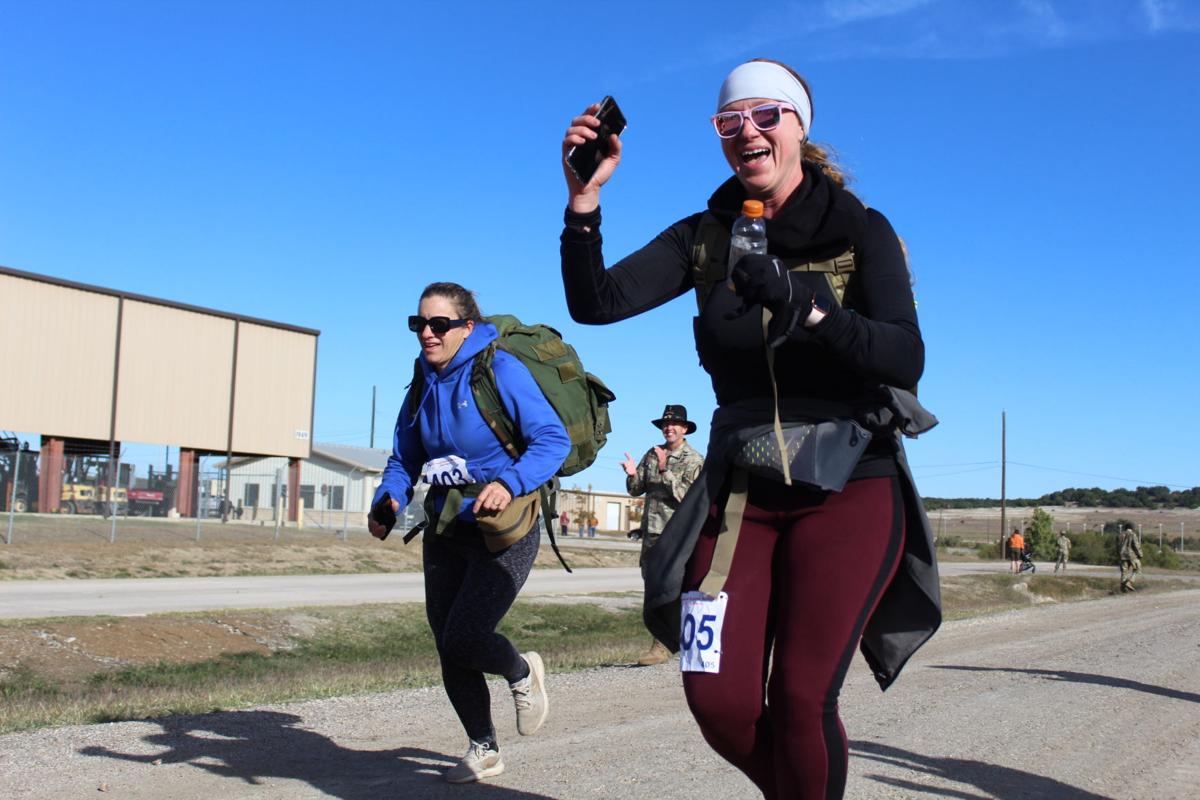 Army spouses Katie Goldsworthy and Karen Brillhart cross the finish line in 4 hours, 1 minute, faster than many Soldiers, during the 18.6-mile ruck march. 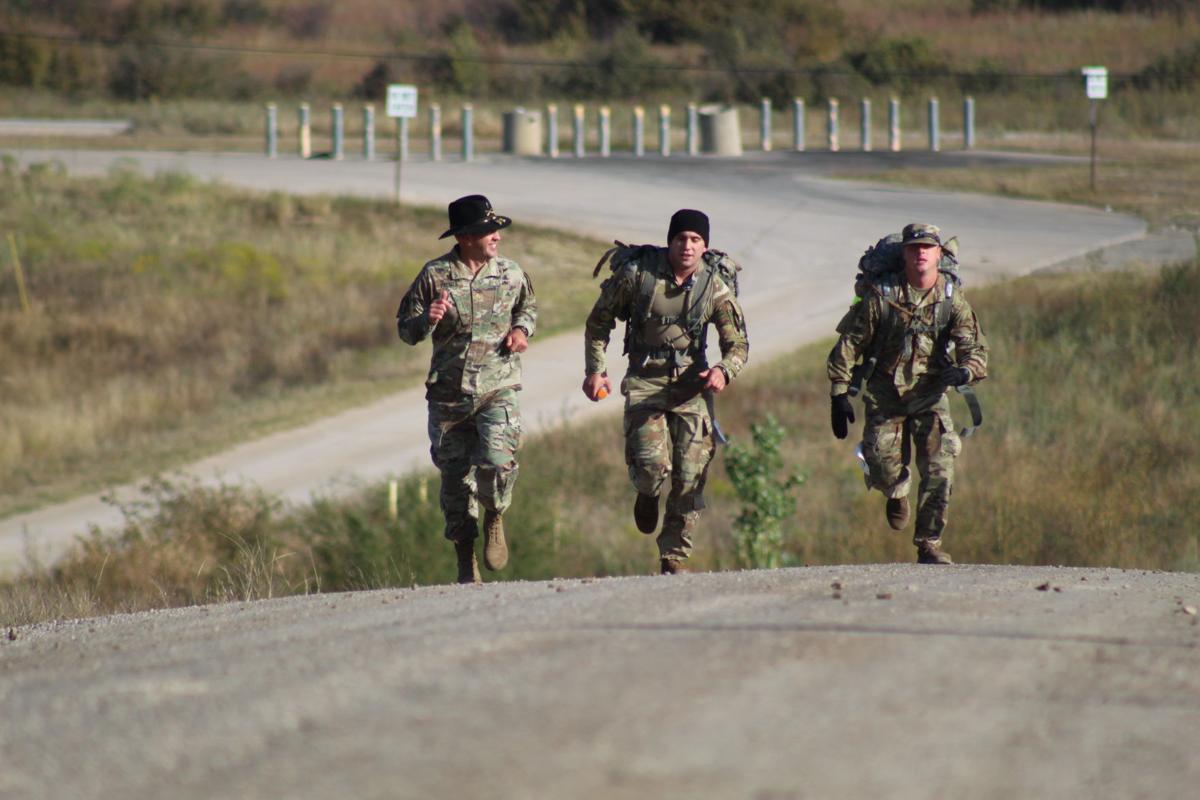 Chaplain (Maj.) Jason Palmer looks over as he runs alongside Spc. Wyatt Griner and Spc. Ryan Drew, as they crest the final hill during the fourth annual Kapaun Memorial Ruck March Friday. Palmer created the event to memorialize Chaplain (Capt.) Emil Kapaun, one of nine Army chaplains to have been awarded the Medal of Honor. Palmer retired Friday, waiting to see Griner, his best friend’s son, complete the ruck. 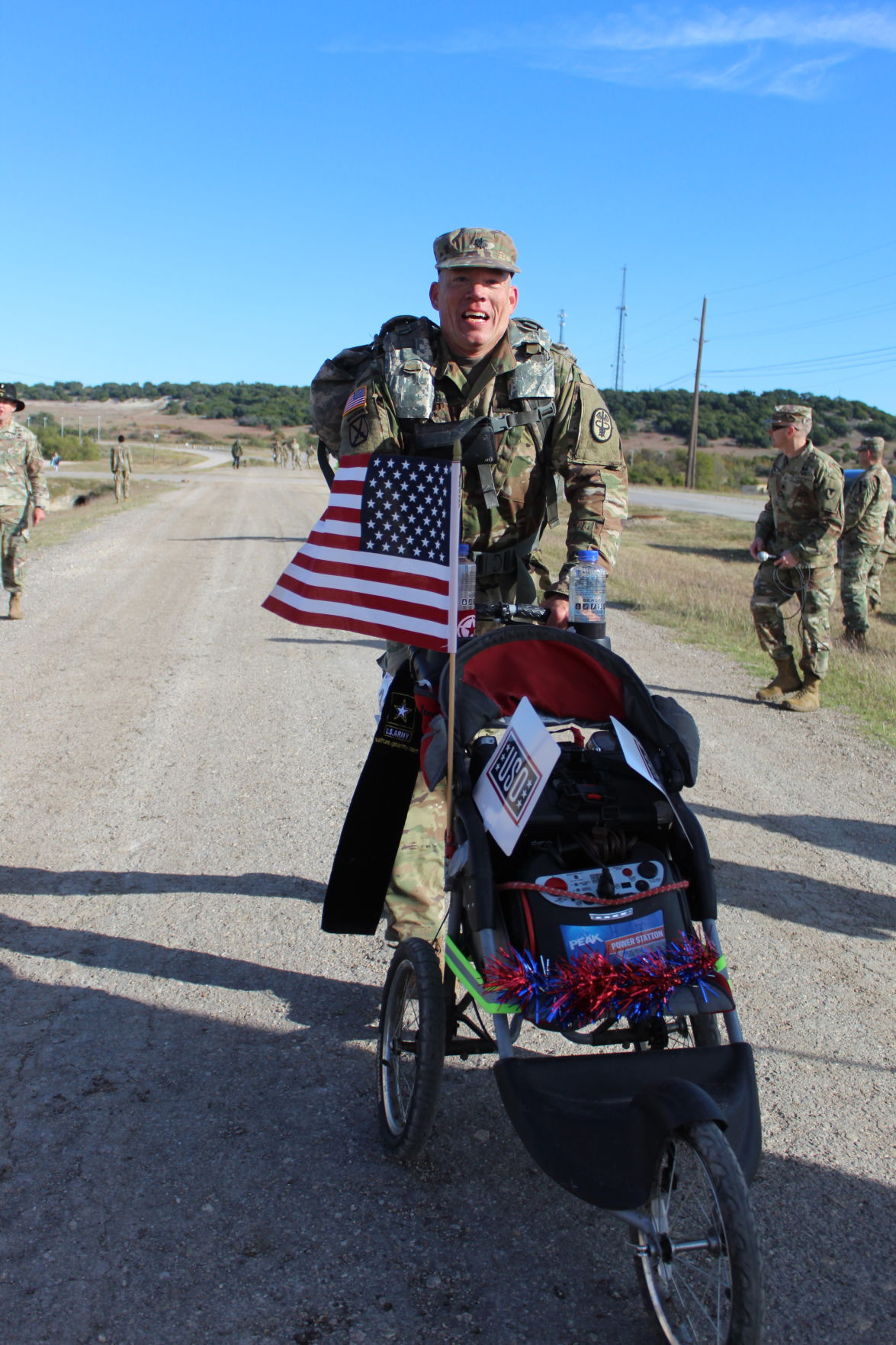 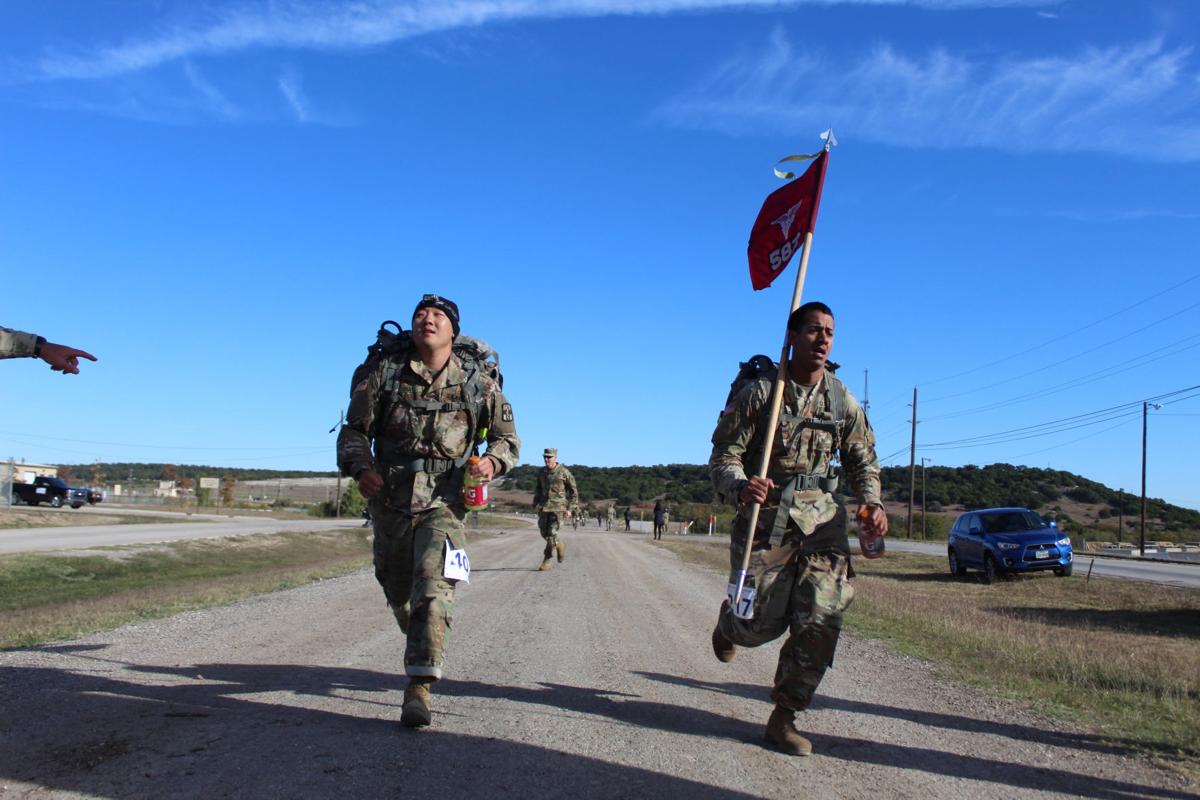 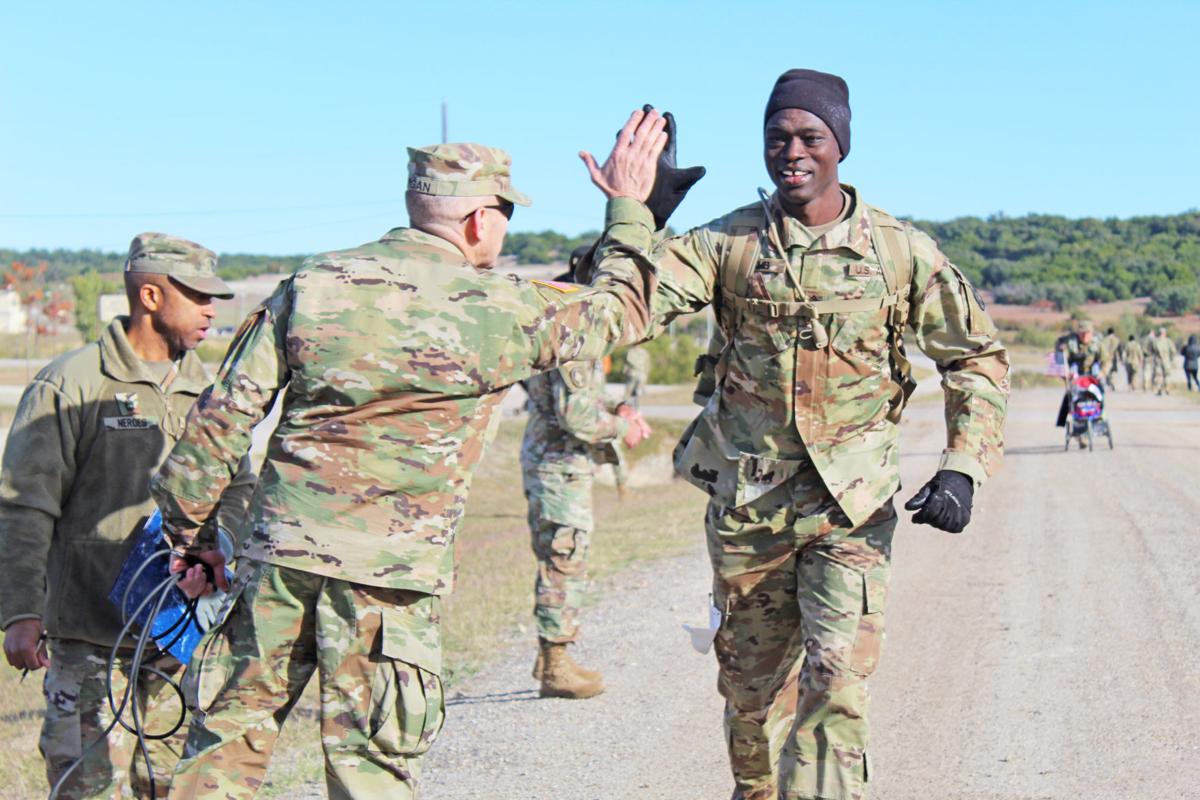 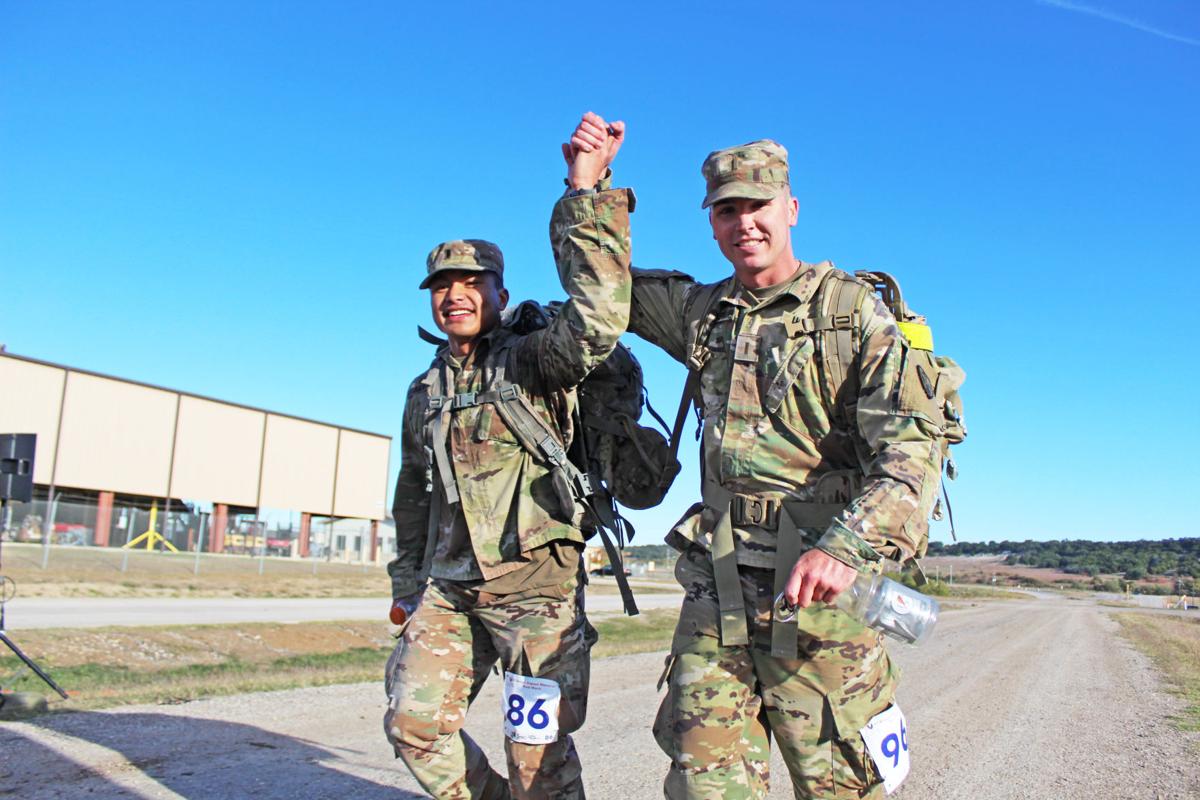 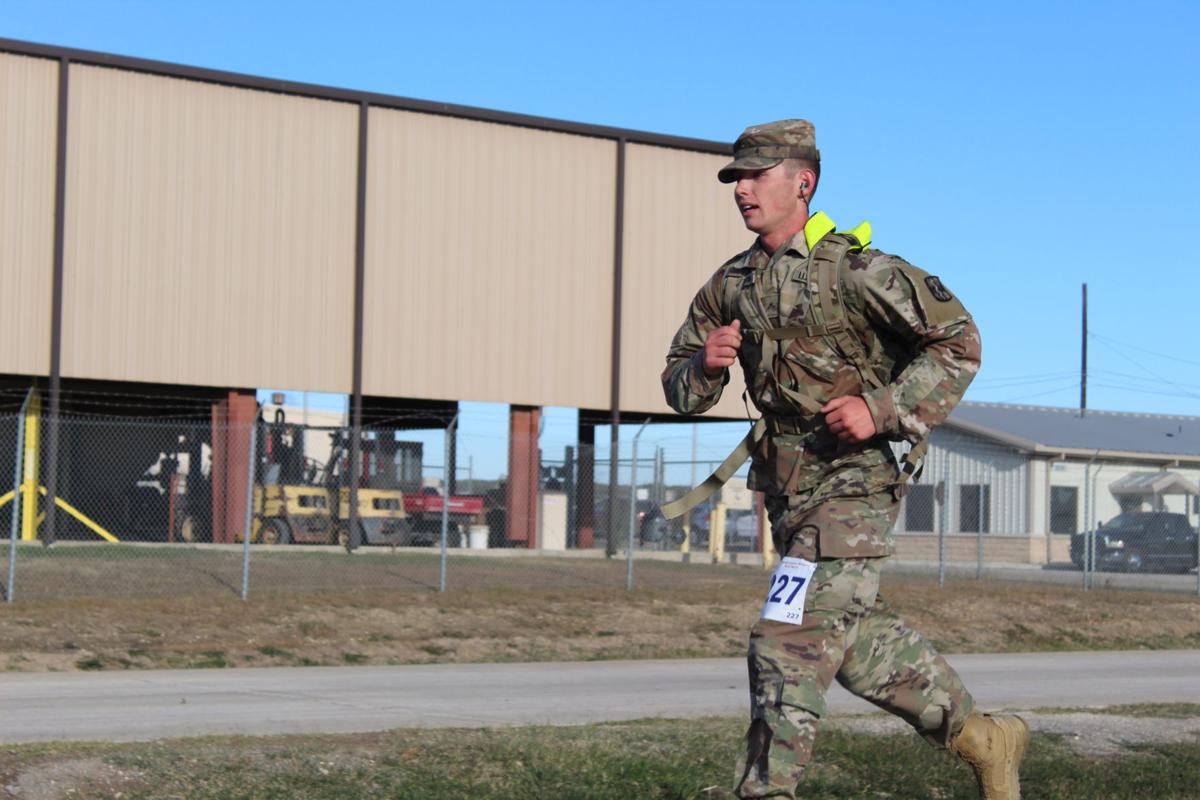 Army spouses Katie Goldsworthy and Karen Brillhart cross the finish line in 4 hours, 1 minute, faster than many Soldiers, during the 18.6-mile ruck march.

Chaplain (Maj.) Jason Palmer looks over as he runs alongside Spc. Wyatt Griner and Spc. Ryan Drew, as they crest the final hill during the fourth annual Kapaun Memorial Ruck March Friday. Palmer created the event to memorialize Chaplain (Capt.) Emil Kapaun, one of nine Army chaplains to have been awarded the Medal of Honor. Palmer retired Friday, waiting to see Griner, his best friend’s son, complete the ruck.

They didn’t do it for glory or praise, they did it in memory of an Army chaplain who paid the ultimate price by caring for troops as a prisoner of war during the Korean War.

Nearly 400 Soldiers and family members participated in Fort Hood’s fourth annual Kapaun Memorial Ruck March Friday. The 18.6-mile trek was held in honor of Chaplain (Capt.) Emil Kapaun, one of nine Army chaplains to have been awarded the Medal of Honor.

The event was created in 2016 as a way to memorialize Kapaun’s sacrifice. Kapaun was serving with 3rd Battalion, 8th Cavalry Regiment, 1st Cavalry Division, during the Korean War, when the unit’s positions were overrun by North Korea.

“The chaplain, instead of retreating, stayed with the wounded and wound up being captured,” Chaplain (Lt. Col.) Mark Morgan, deputy garrison of U.S. Army Garrison – Fort Hood, explained. “They forced the wounded, him and multiple other Soldiers to walk 87 miles to a POW camp in North Korea.”

Kapaun attempted to take care of the Soldiers and encourage them to keep fighting.

“They punished him by putting him naked outside in sub-zero weather,” Morgan said.

Chaplain (Maj.) Jason Palmer, 1st Cav. Div. chaplain, organized the event from 2016-2018, starting with only a handful of people from the religious team. Throughout the years, the event has steadily grown, with 397 participants this year. Palmer, who also retired Friday, said the Fort Hood Garrison Chaplain’s office took over this year under the guidance of Col. Jason Wesbrock, commander of U.S. Army Garrison – Fort Hood.

“I did it last year, so I know what they’re going through,” Wesbrock said. “It’s not an easy task, but I’m pretty proud of them for being out here and taking this on.”

Morgan explained the ruck march is 18.6 miles, so Soldiers also have the opportunity to obtain the Norwegian Foot March badge, an armed forces skills badge created by the Norwegian military in 1915. If done in the allotted amount of time, an American Soldier may obtain the badge.

“It’s a foreign award they can actually wear on their Army service uniform,” Morgan said.

To qualify for the Norwegian Foot March badge, males under 34-year-old must finish in 4 hours, 30 minutes. They are allotted five additional minutes for every five years above 34. Female finishers must complete the ruck within 5 hours, 5 minutes.

“It’s a tough march. I’ve been in the 101st for 10 years out of my Army career and have done 12-mile road marches forever,” Morgan said. “Last year I did this and 18 miles is much more difficult than 12 miles.”

As the first two participants began to crest the last hill along the route, people cheered them to the finish line. They were strangers when the ruck march began, but ended as friends. Coming across the finish line together, with a time of 3 hours, 23 minutes, were 1st Lt. Raphael Garcia, 20th Engineer Bn., 36th Engineer Brigade, and 2nd Lt. Brendan Grady, 163rd Military Intelligence Bn., 405th MI Bde.

“We just met on the road,” Grady said. “We just started talking … where we’re from and stuff like that.”

After realizing they were keeping the same pace throughout the ruck march, Garcia said they decided to come across the finish line together. Setting aside any competiveness, about 10 feet before the finish line, the two Soldiers grasped hands and ran.

“You don’t see that every day,” Morgan said about the Soldiers finishing together. “They were doing 10 minute miles, with a 25 pound pack on and wearing combat boots. That’s a good time.”

Pvt. Abbi Fouquette, 226th Engineer Bn., was the first female to finish the ruck, with a time of 3 hours, 54 minutes. She said she’s been in the Army less than a year, so she feels great being able to finish.

“We did two rucks a week and we upped the ruck mileage every week,” Fouquette said about her preparation for the ruck march.

While every person had a reason to be there, Palmer said he chose Friday to be his retirement from the Army specifically because of the ruck march.

“I chose today to be my last day in uniform, so I would be able to hug sweaty Soldiers before going and signing out for the very last time,” Palmer said. “I got to finish with a kid I’ve literally known since his first breath, so what a joy to finish that way. He is my childhood best friend’s son and I’m super proud of him.”

“And just be reminded that when you go out and do the things you’re asked to do as a Soldier, you can really profoundly influence the people to your left and right,” he said, “if you live life the right way and if you live life selflessly.”

He said the participants are told about historical significance before the ruck march, so they knew why they were competing.

“We use it as a spiritual fitness event,” Palmer said, “To reflect on a Soldier, like them, who went through some difficult times and there’s no reason we can’t walk just as