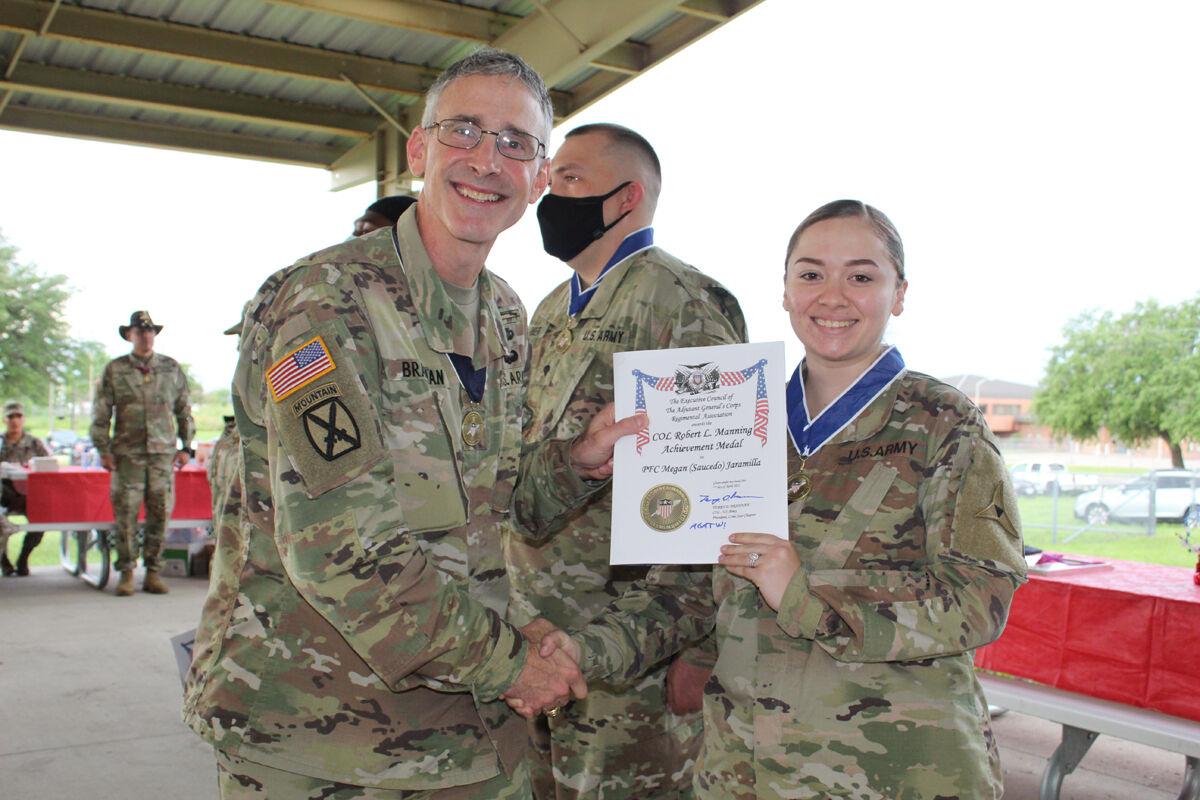 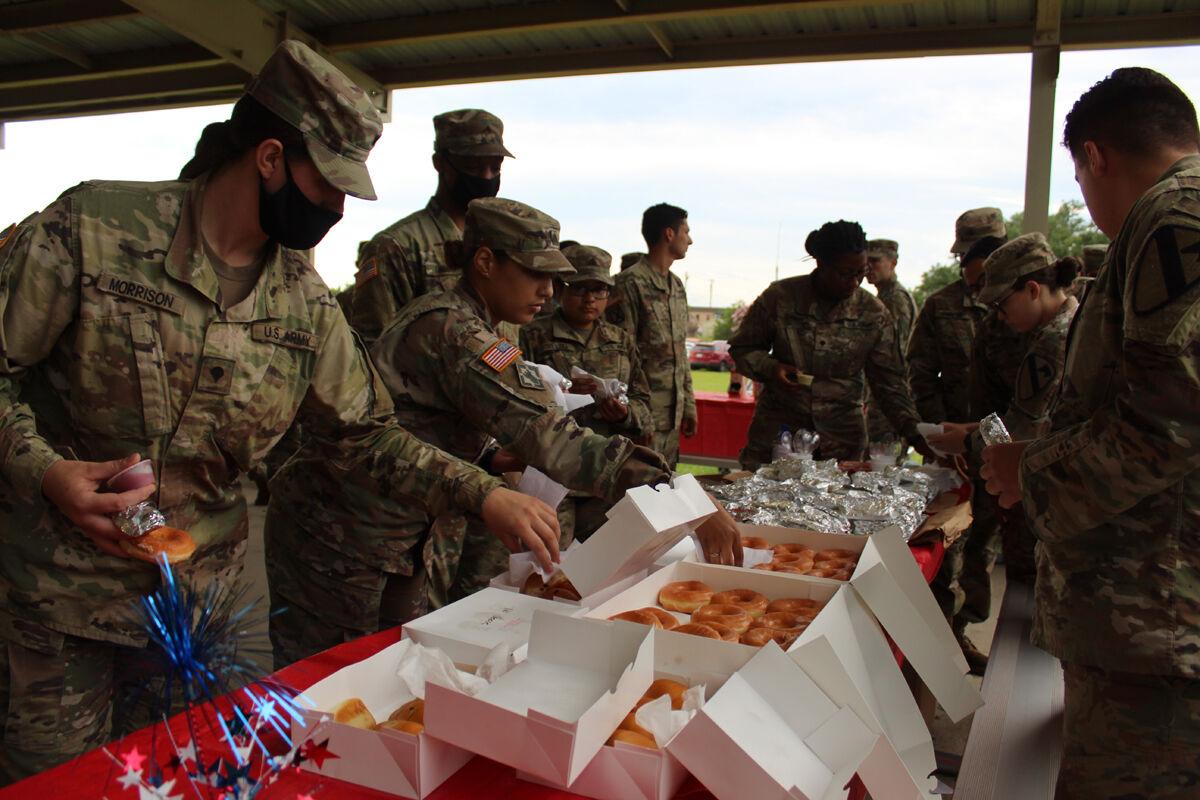 Soldiers help themselves to breakfast burritos and donuts during the Lone Star Chapter of the AG Corps regimental breakfast June 3 at the Sportsman’s Center pavilion. 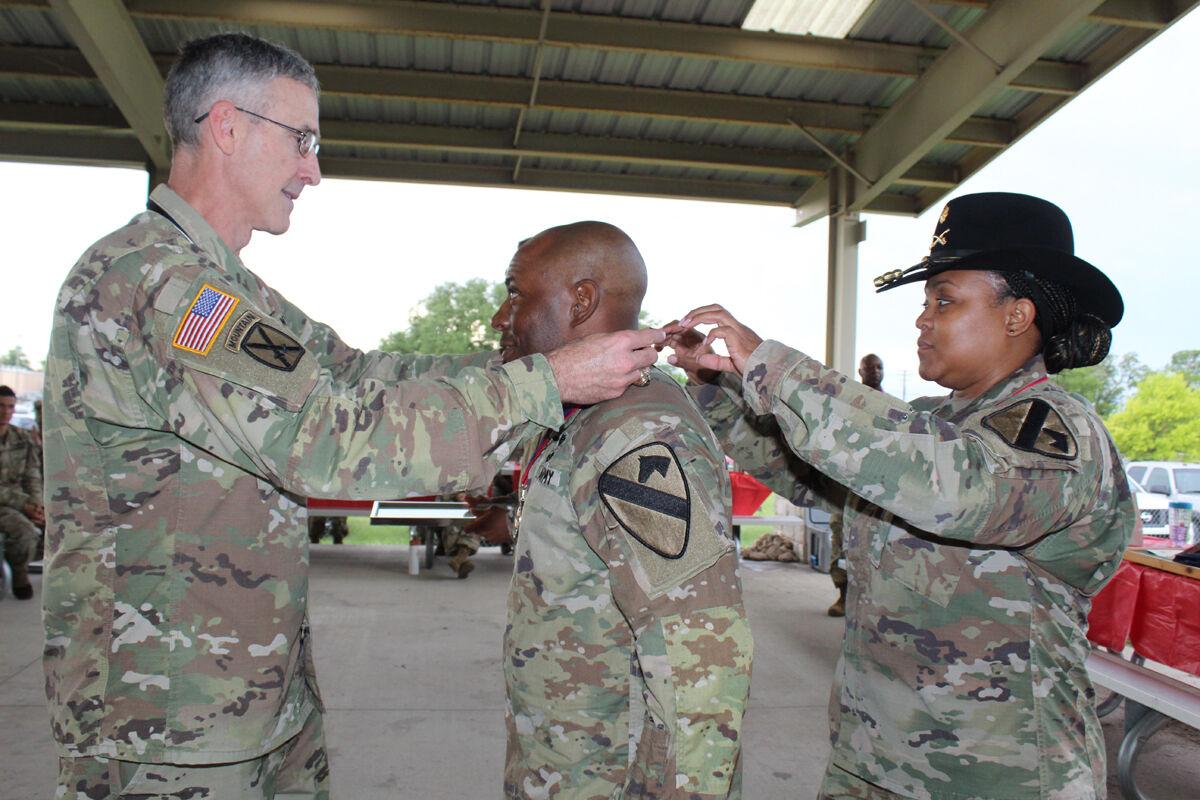 Soldiers help themselves to breakfast burritos and donuts during the Lone Star Chapter of the AG Corps regimental breakfast June 3 at the Sportsman’s Center pavilion.

For service to the Soldiers and families at Fort Hood, 10 awards were presented during the Lone Star Chapter of the Adjutant General’s Corps regimental breakfast June 3 at the Sportsman’s Center pavilion.

Col. Terry Brannon, III Corps G-1 commander, took an opportunity to thank the hundreds of AG Soldiers in attendance, and said he is proud that the AG Corps is “the branch of high morale.”

“Love, live and be good each day,” Brannon told the large crowd. “The world is a much better place when you walk around with a smile.”

Sgt. Maj. Ira Russey, III Corps G-1 sergeant major, who is retiring after 30 years of service, was presented the Order of Horatio Gates Gold Medal, for a career of service.

Linda Wright and Maj. Kristina Clark were presented the Order of Horatio Gates Bronze Medal for their continued service to the AG Corps.

Maj. Gen. Horatio Gates served as the second officer commissioned by the U.S. Army and the Army’s first adjutant general. After serving in the British Army, Gates offered his support to the new American Army and was commissioned on June 17, 1775.

After winning key victories in the battles of Bennington, Fort Stanwix and Saratoga, Gates was presented a gold medal by congressional resolution. The Major General Horatio Gates Award is now presented in his name to recognize distinguished achievement and service to the Army’s AG Corps and human resources.

Col. Robert L. Manning created the AG Corps Hall of Fame on June 11, 2010. Manning was the 29th AG Corps chief, and was the longest-serving commandant of the Adjutant General’s School and the chief of Army bands. The award is now presented in his name to recognize achievements within the Army’s AG Corps and human resources.

Brannon also recognized the contributions of Col. Howard Matthew, 1st Cavalry Division staff judge advocate, with the Honorary Horatio Gates Medal. He said for a Soldier outside the AG Corps to receive the honorary award is a big deal because it means they went above and beyond their normal duties.

“I’m proud of this teamwork,” Matthew told the crowd. “I’ve had a lot of good work coordination with a lot of people, but especially with those in the AG Corps.”

“He’s just been a great leader. He’s Texas born, he loved being here at the Great Place and it showed,” Flores said about Brannon. “We could feel his love, appreciation and his support.”