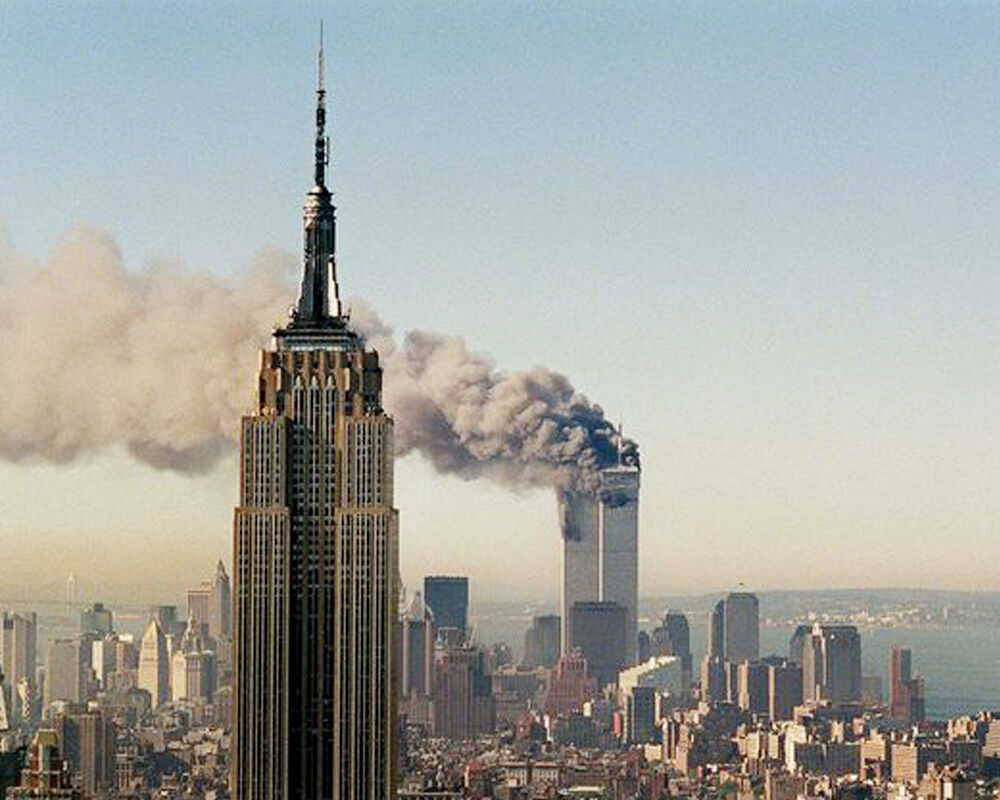 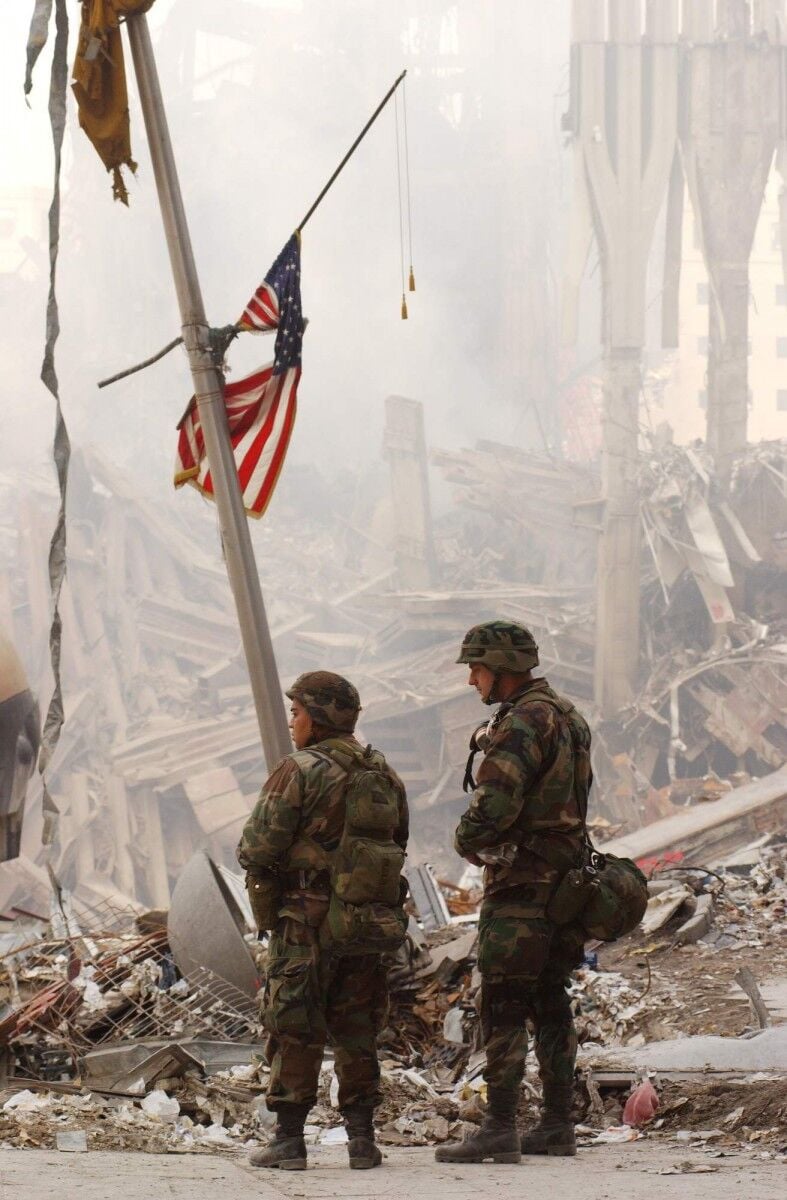 Two service members survey the damage following the terrorist attack at of the Twin Towers in New York City on Sept. 11, 2001. Deaths at World Trade Center totaled 2,753, including fire fighters and police officers. 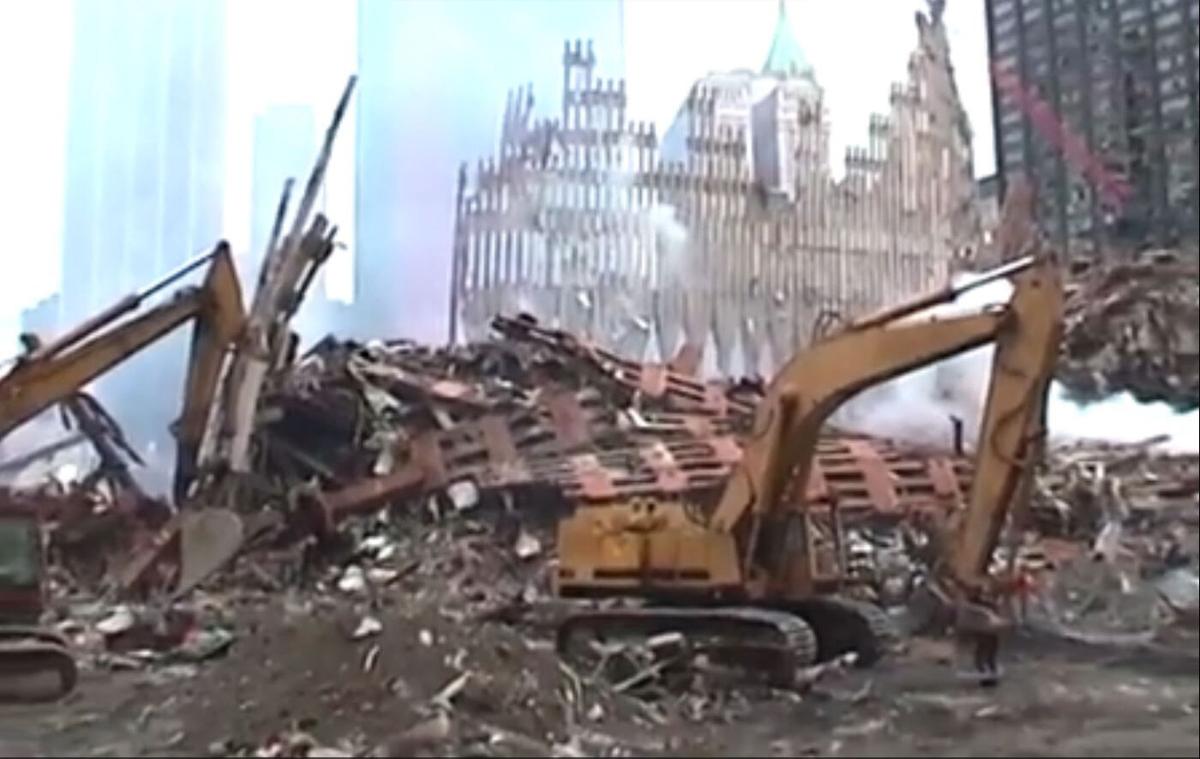 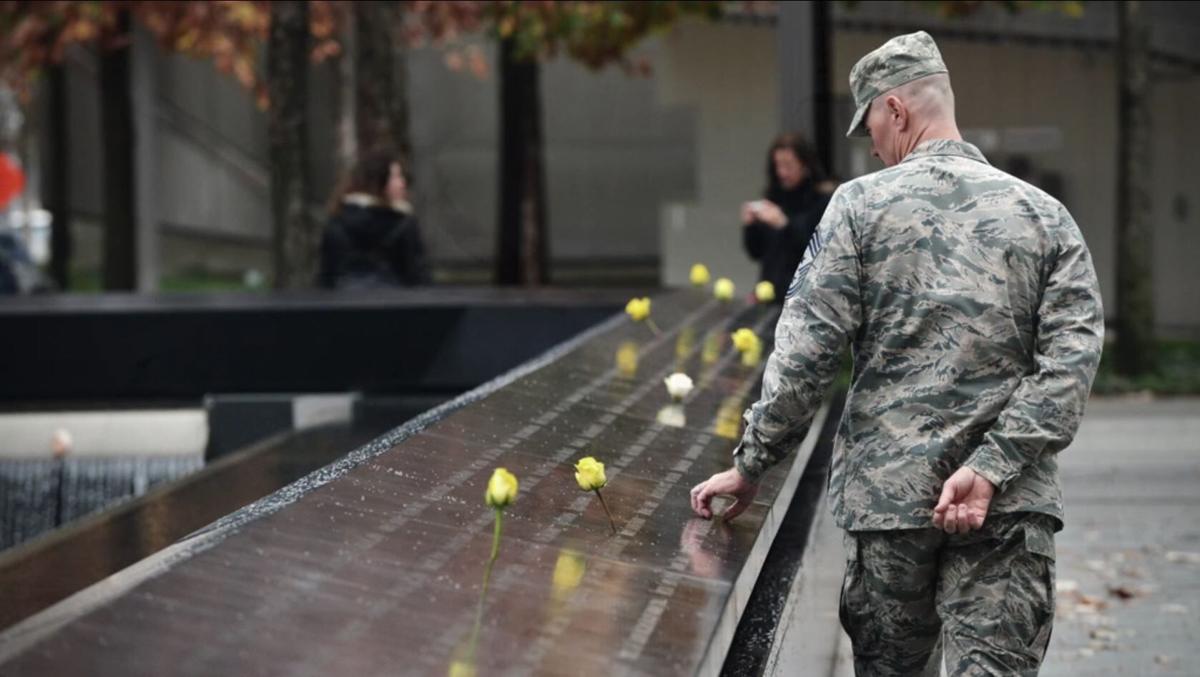 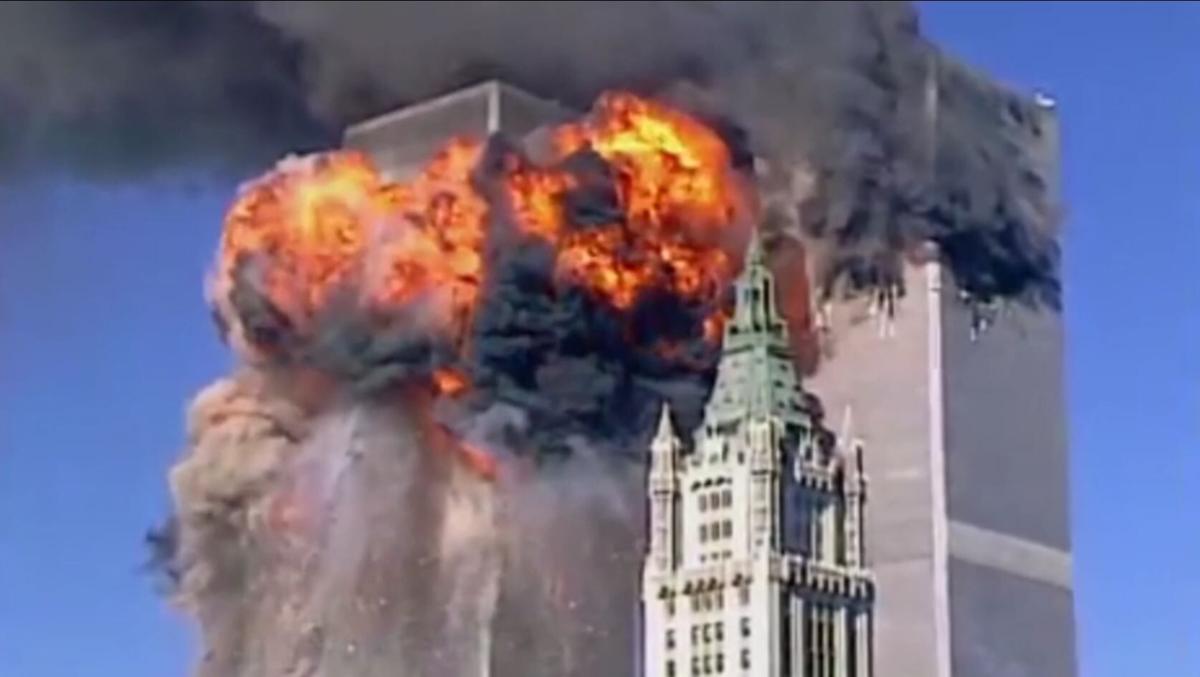 United Airlines Flight 175 hits the Twin Towers at 9:03 a.m., resulting in an explosion. 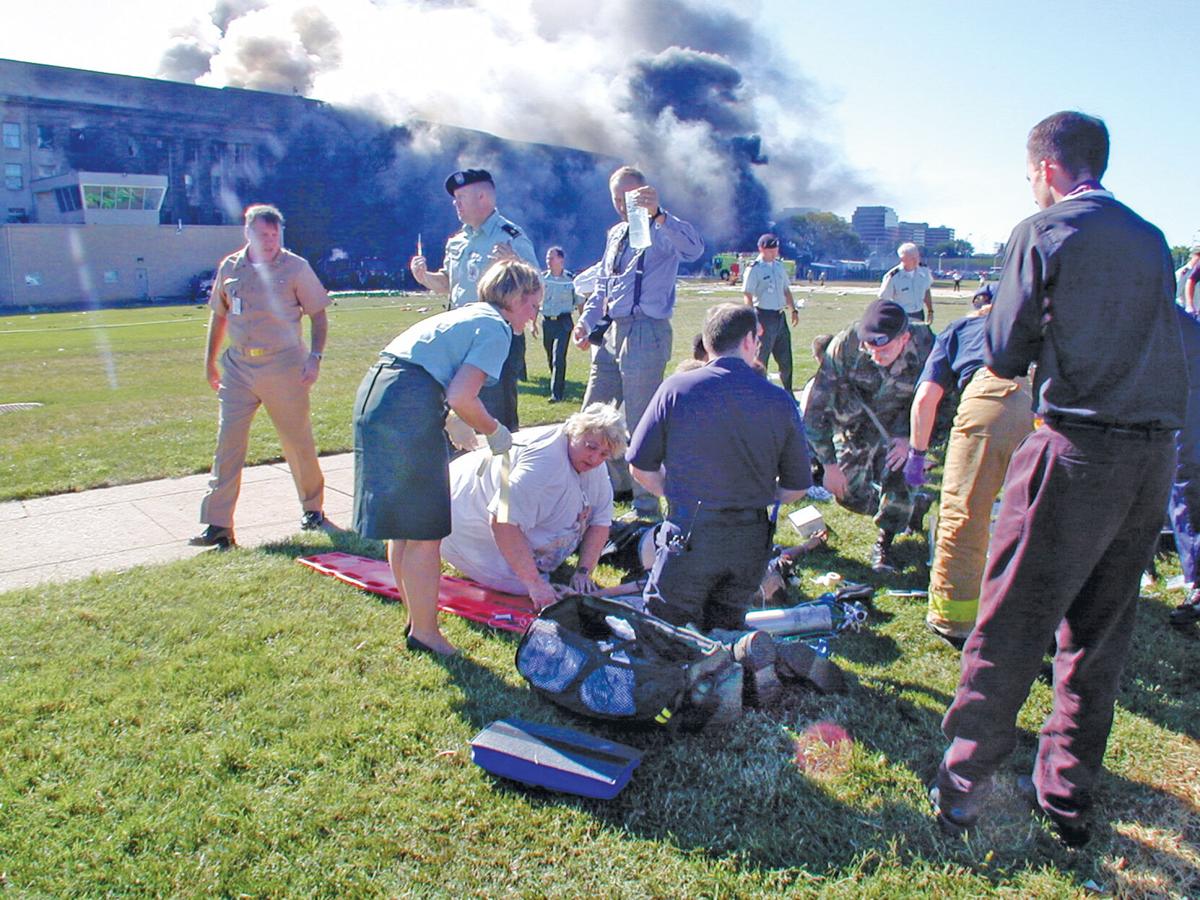 Medical personnel and volunteers work the first medical triage area set up outside the Pentagon after a hijacked commercial airliner crashed into the southwest corner of the building. 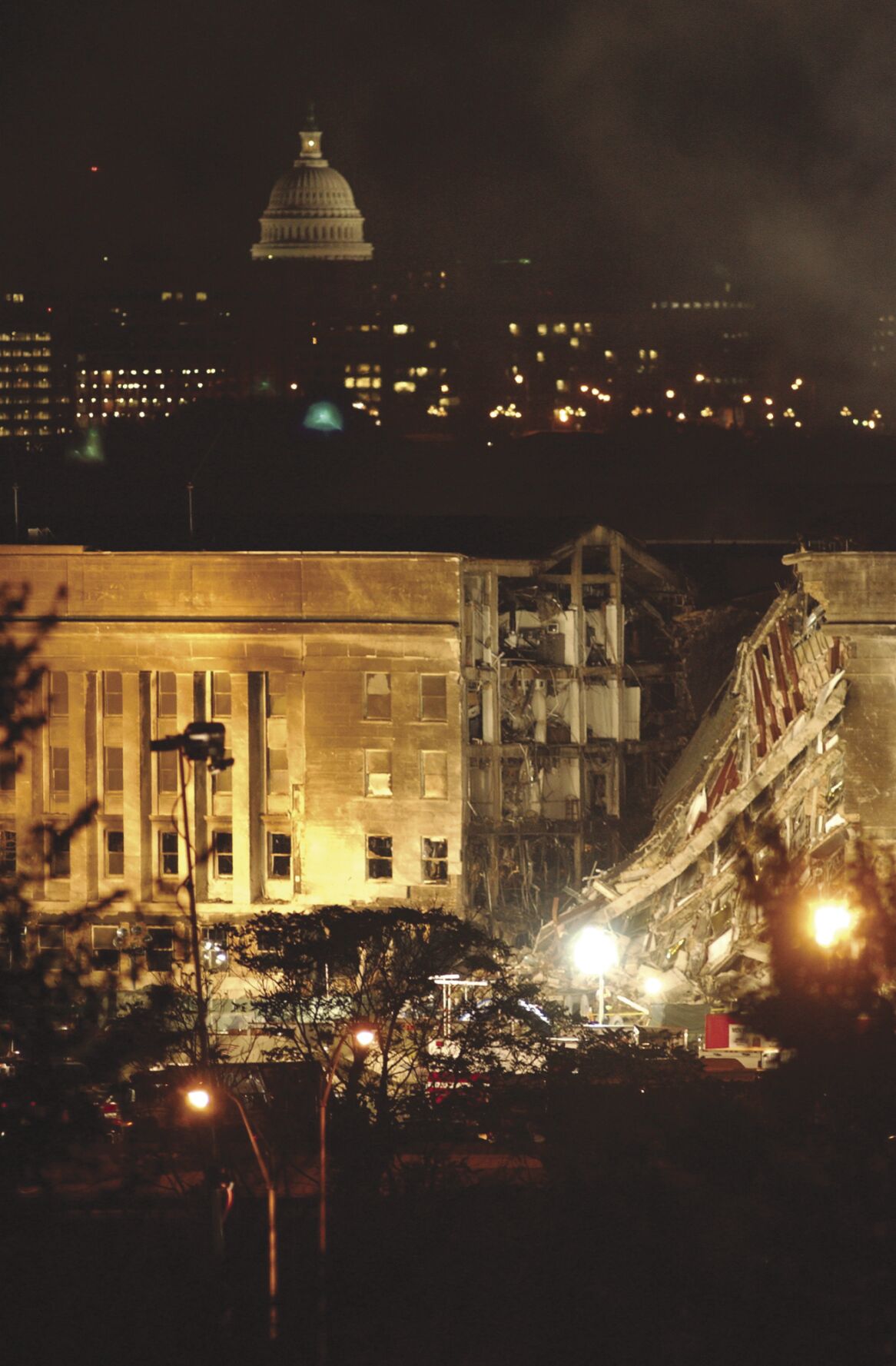 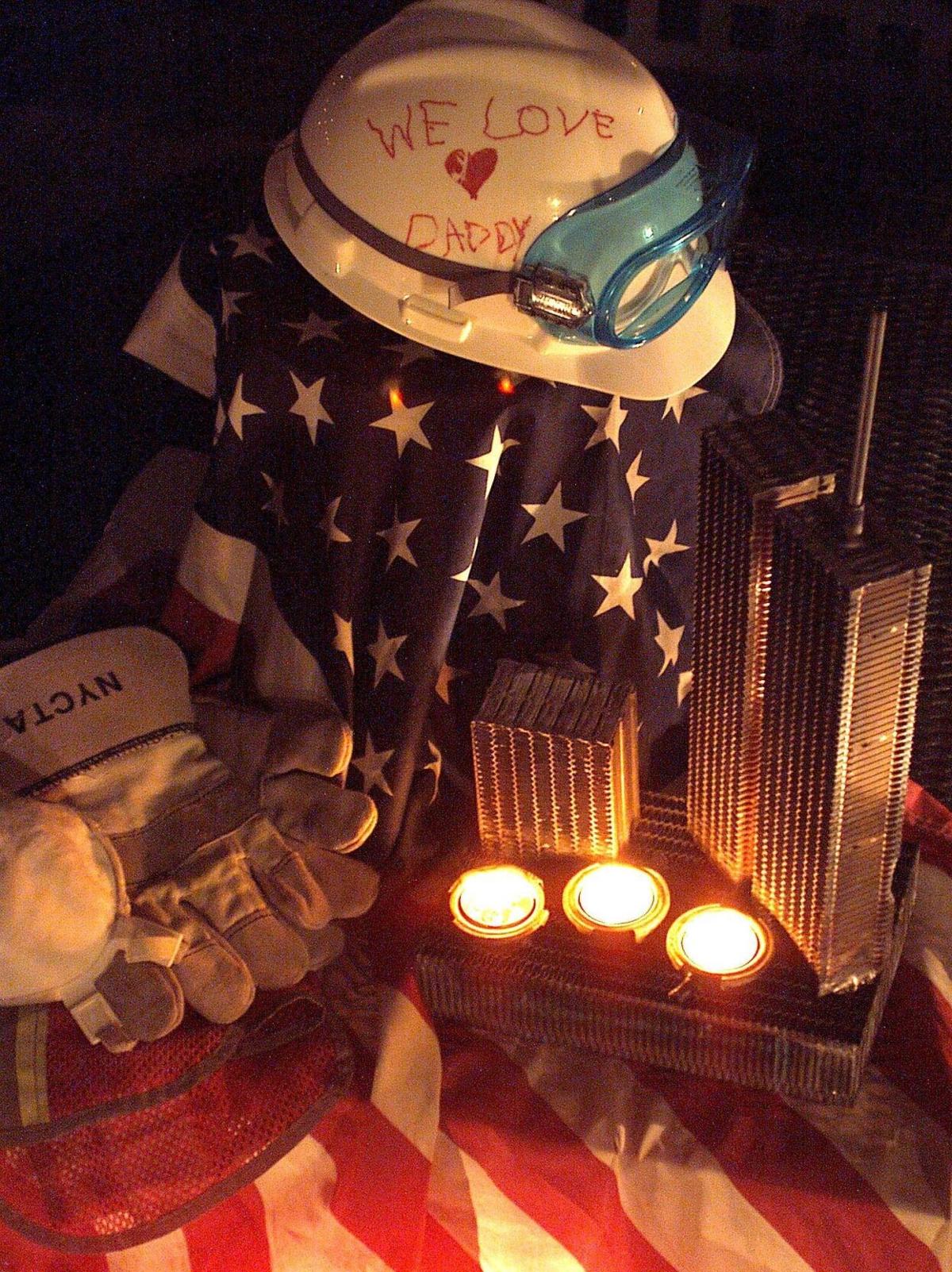 A memorial to the World Trade Center rescue workers next in Lower Manhattan’s Battery Park. 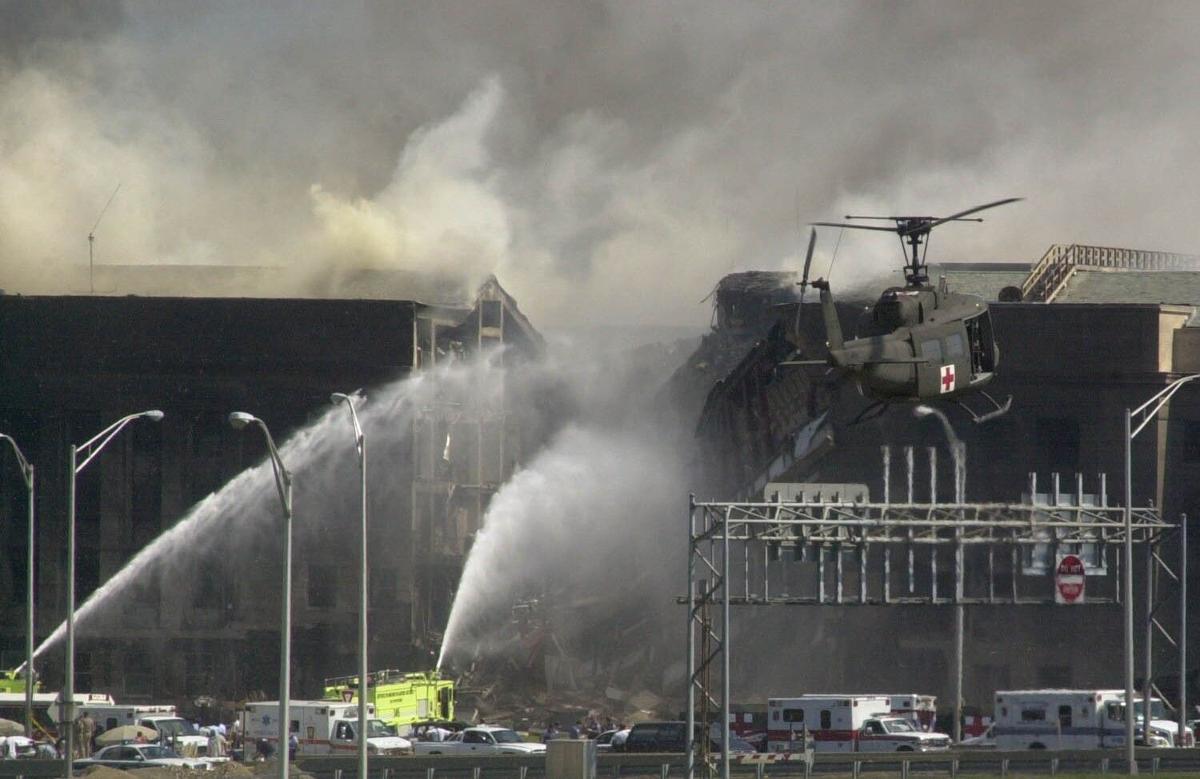 A UH-60 Blackhawk MEDEVAC helicopter circles over the Pentagon as emergency crews put out the fire and search for survivors.

Two service members survey the damage following the terrorist attack at of the Twin Towers in New York City on Sept. 11, 2001. Deaths at World Trade Center totaled 2,753, including fire fighters and police officers.

United Airlines Flight 175 hits the Twin Towers at 9:03 a.m., resulting in an explosion.

Medical personnel and volunteers work the first medical triage area set up outside the Pentagon after a hijacked commercial airliner crashed into the southwest corner of the building.

A memorial to the World Trade Center rescue workers next in Lower Manhattan’s Battery Park.

A UH-60 Blackhawk MEDEVAC helicopter circles over the Pentagon as emergency crews put out the fire and search for survivors.

Twenty years after the deadliest terrorist attack on American soil, Fort Hood personnel reflect on the events of that fateful day, and how, in America’s darkest hours, the nation stood as one.

On the morning of Sept. 11, 2001, then-Lt. Col. Tom Rheinlander, watched from televisions inside the Pentagon, as a plane hit the Twin Towers in New York City. Like most people, he said everyone assumed it was a sightseeing plane.

“When the second one hit, it was an uneasy thought process. This was a deliberate attack,” he said. “You could kind of sense that the building started to ramp up as far as people doing things with the type of awareness that something was going on.”

At 9:37 a.m., Rheinlander said he felt the rumbling of the building, followed shortly by the fire alarm. After quickly securing classified material, he said he decided to make a quick phone call home and left a voicemail, a new technology of the time, to let his family know he was safe, but evacuating the Pentagon.

“Once outside, I could see black smoke and realized the building had been hit,” he explained. “I thought at the time it had been a truck bomb or something like that, because the thought that someone could crash a plane into the Pentagon, which is only about five stories high, didn’t seem plausible.”

An hour later, Rheinlander, who was serving as the deputy public affairs officer for the Joint Chiefs of Staff, working directly with the chairman and vice-chairman at the time, was asked to re-enter the building to go into the National Military Command Center.

“I went in under oxygen with a fireman, because at the time, the hallways were filled with smoke,” he added.

Then-Secretary of Defense Donald Rumsfeld was trying to decide whether to stay in the Pentagon or go to an alternate site. Rheinlander said they decided to at least prepare the alternate site.

“We actually flew out by helicopter. As we were leaving, we did a circle around the Pentagon when we left and you could see where the plane had impacted,” he explained. “We knew it was bad at that point.”

After spending the night at the alternate site, Rheinlander made his way back to the Pentagon, where it was decided to keep the Pentagon going. After making his way home, he discovered that his family never received his voicemail and had been left wondering if he was among the dead.

“At that point and time, technology was just switching over. Turns out, all those voicemails went through communication towers that were located on top of the Twin Towers, so when they fell, so did all that connectivity,” he said. “At least, that’s what I was told.”

Looking back 20 years later, Rheinlander said he knows it could have been a lot worse at the Pentagon. Despite 125 lives lost that day, he explained that the portion of the Pentagon that had been hit had been recently renovated, reinforced with steel beams and the building had blast proof windows installed.

“Those two items were able to save a lot of lives at the impact point. They allowed the building to stay up for about 90 minutes after impact, which allowed rescuers to go in and pull out people who were injured,” he said. “A lot of those offices were just moving back in after renovation, so there weren’t as many people in those offices as could have been. It could have been a lot worse.”

Rheinlander, who now serves as  the director of the Fort Hood Public Affairs Office, said there are memories of that day, and the days that followed, that will never leave his mind.

“I can still hear the alert sirens,” he said. “And because I was able to do the overflight, seeing for that first time, the impact and how devastating it was, will never leave me.”

He said the resolve of the military, Department of Defense civilians, families and communities to take a punch, stand back up and come together following that tragic day was inspiring.

“I have great admiration to the men and women who volunteered to serve in the military after our country was attacked on 9/11, knowing they would be in harm’s way,” Rheinlander added. “Personal and family sacrifices were a possibility and yet, they still raised their hand and took an oath to protect our nation and take the fight to the enemy. I am humbled and very appreciative.”

In Monmouth, Illinois, a small farming community southwest of Chicago, 1st Sgt. Mark Taylor, brigade first sergeant of Headquarters and Headquarters Company, 3rd Security Forces Assistance Brigade, was a freshman in high school arriving to school on the morning of Sept. 11, 2001, confused about the chaos that was taking place as everyone was quickly ushered into the classrooms.

The school watched in horror as the second plane hit the Twin Towers, prompting the school to tell everyone to go home for the day. After arriving home, Taylor said he sat in front of the television, watching the terror unfold as people jumped from the top of the Twin Towers, followed by the collapse of the buildings.

“That just stuck with me as a kid. Instantly, right there, I was like ‘I want to do something.’ I felt confusion, sadness and then shame. The shame I felt was how little I knew of the Twin Towers and what they were, what they stood for and what they did. How little I knew of our place in the world and current events,” he admitted. “I just completely kept a blind eye to it. The thing that stuck out the most was the shame. I didn’t know these things and I could have, but chose not to.”

Taylor described the days, weeks and months after 9/11, as an awakening. Every street had American flags waving, everyone supported the troops and everyone was full of pride in their country.

After deciding to enlist, Taylor went into an accelerated program to graduate high school early and joined his older brother in the Army. Taylor’s dad, a Vietnam veteran, understood his son’s motivation and told him what he should expect in combat.

Now, even with 16 years of service and three combat tours under his belt, Taylor said he still feels like the job has not been completed. After becoming a noncommissioned officer, Taylor said those feelings were even stronger because he was responsible for other people’s lives and he could not stand to see a job left undone.

“I don’t think I’ve killed as many bad guys as I could have. I don’t think I’ve done enough work, saved enough people or helped enough people out,” he said. “For a lot of us Soldiers who joined because of 9/11 – during a time of war – 9/11 is a special place in our hearts, a tragic place in our hearts. But I think 9/11 is the one time when we can all be in solidarity, regardless of anything else that is happening or whatever views we have.”