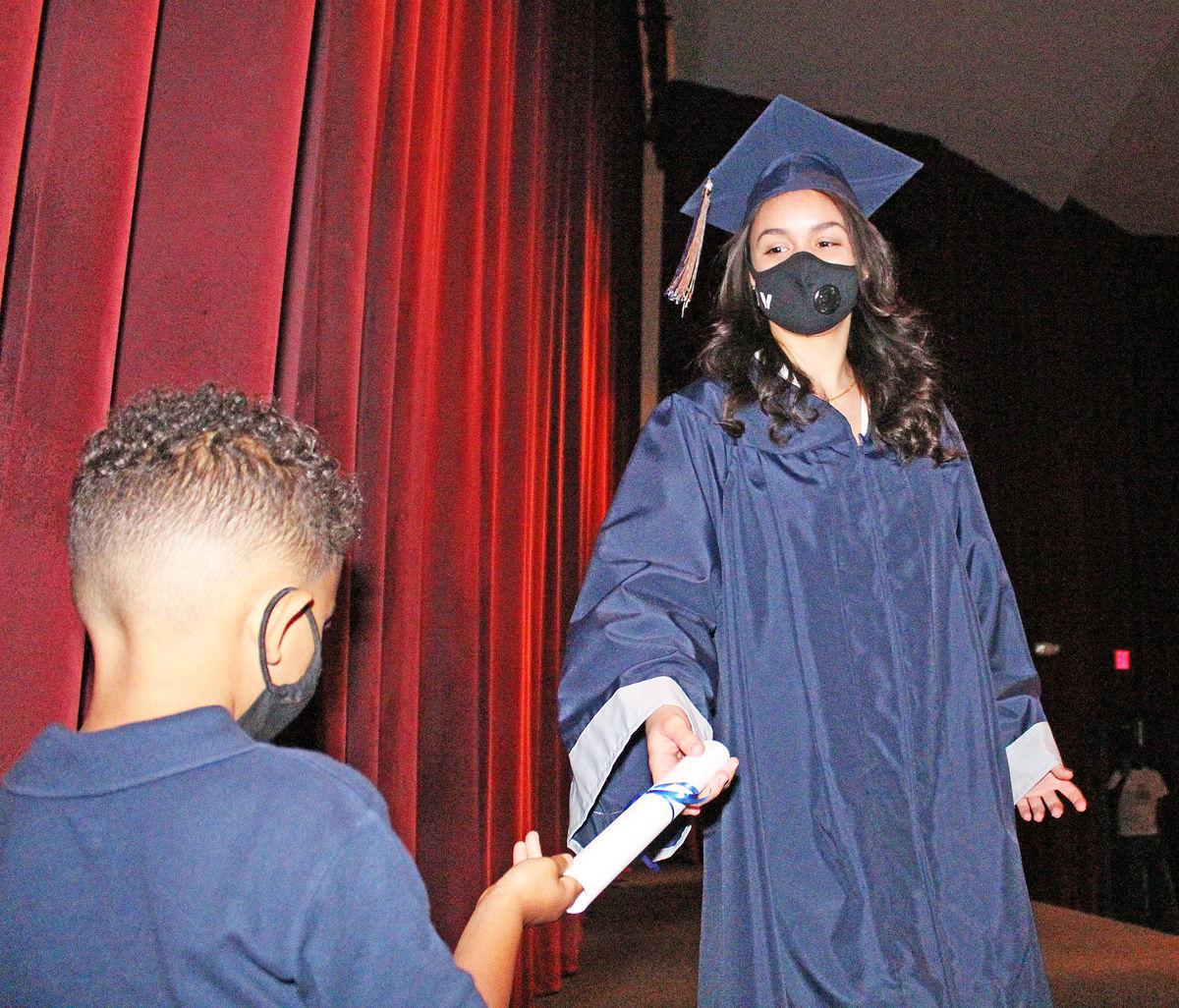 SHS graduate Alondra Velez receives a “diploma” from Gavin Gholston, the 5-year-old grandchild of Martha Gholston, human resources at the Fort Hood Exchange, Monday at a ceremony hosted by the FHEEA at Palmer Theater. 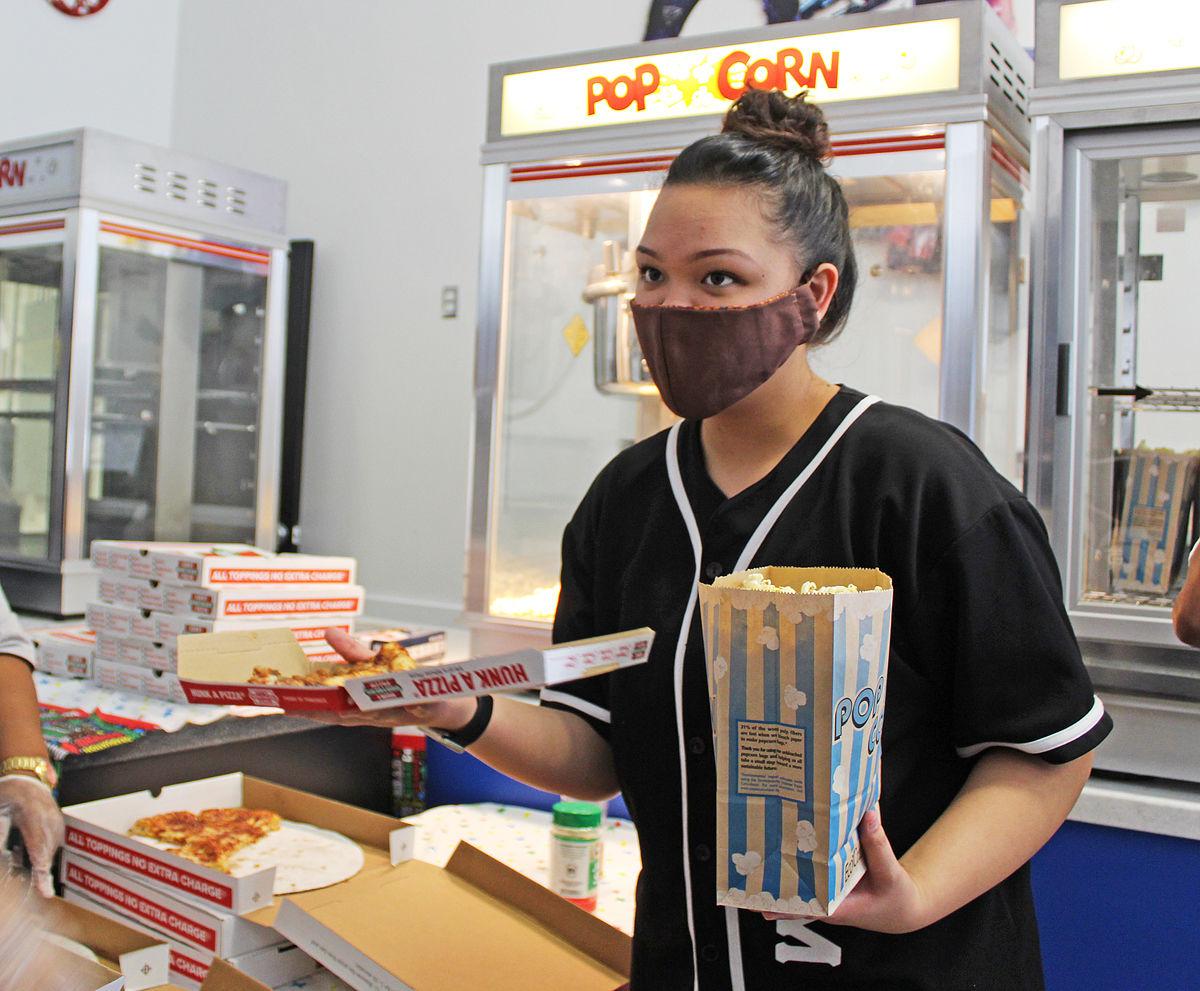 After walking the stage during a FHEEA graduation ceremony, Janecia Quintanilla, a KHS graduate, receives free pizza and popcorn, before watching a free movie, Monday, at Palmer Theater.

SHS graduate Alondra Velez receives a “diploma” from Gavin Gholston, the 5-year-old grandchild of Martha Gholston, human resources at the Fort Hood Exchange, Monday at a ceremony hosted by the FHEEA at Palmer Theater.

After walking the stage during a FHEEA graduation ceremony, Janecia Quintanilla, a KHS graduate, receives free pizza and popcorn, before watching a free movie, Monday, at Palmer Theater.

The Fort Hood Exchange Employees Association honored its Class of 2020 employees and children of AAFES employees, Monday, by hosting a private graduation ceremony at Palmer Theater.

“Since we haven’t been able to do anything because of COVID, we decided to sponsor the seniors who are employees or AAFES family graduates,” Crystal Houston, president of the association and office assistant for Fort Hood Exchange Retail Business Management, said.

Houston said the association normally plans special events for the AAFES employees, but with COVID-19 closing things down, they decided to honor their graduates instead. With help from several sponsors, 20 graduates were presented a “diploma,” along with two gift bags full of goodies and a banner with their picture and name to display at their home.

“I think the most important thing for a graduate is having their name called and walking the stage – that’s what we wanted to give them,” Houston said.

Guest speakers for the event include Ashley Vaughn, a 2015 graduate of EHS, and Angenet Wilkerson, the director of student district community relations for KISD.

Vaughn offered up three nuggets of advice for the Class of 2020. She told the graduates to treat everyone with dignity and respect, encouraged them to “stop and smell the roses,” because time is precious and it cannot be given back, and told them they have the power to accomplish anything they want in life.

Wilkerson told the graduates that everything they’ve learned up to this point has been building their foundation for the future, but it’s up to them to take it to the next level – whether it be college, military or straight into the workforce.

Echoing what Vaughn previously said, Wilkerson told the graduates to not give up, because it is up to them alone to turn their vision for the future into reality.

“We can stand on the sideline and cheer you on, but it’s up to you to run your race,” she said. “We have our own race to run.”

Personal information about each graduate’s favorite things were listed as they walked across the stage, with many of the graduates wearing masks that matched the color of their school’s cap and gown. The graduates were presented their “diplomas” from 5-year-old Gavin Gholston, the grandchild of Martha Gholston, human resources at the Fort Hood Exchange.

“It’s really special because we had the opportunity (to walk the stage) taken away, so to have this is a blessing,” SHS graduate Alondra Velez said.

Following the ceremony, the graduates and their families were invited to grab a free slice of pizza, drink and popcorn and watch a free movie. Houston said when she told Daniel Wise, the Fort Hood AAFES general manager, about her idea to honor the graduates, he offered up the use of Palmer Theater for the event.

The intimate ceremony with their families was not lost on the graduates, who were touched by the kindness of the AAFES employees, who went out of their way to make them feel special.

“It was really sweet because I don’t get to have an actual graduation,” SHS graduate Gabrielle Collier said. “I sincerely appreciate the kind gesture.”