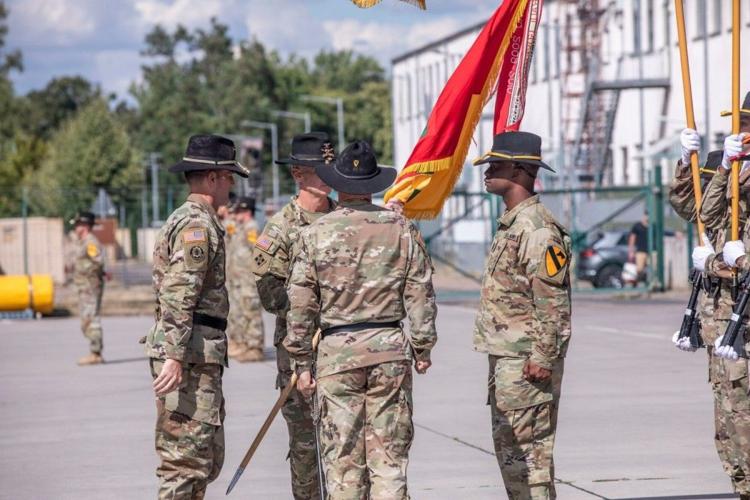 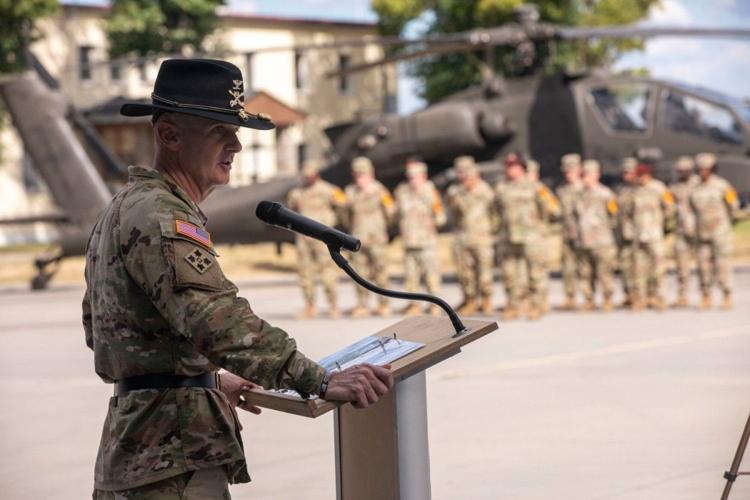 Sabers, spurs and Stetsons amassed on Storck Barracks Airfield with full-Cavalry pageantry on parade in front of military and civilian officials. The formation of troops was bookended by an AH-64 Apache and a CH-47 Chinook, representing the airframes flown by Jaeger and Harper, respectively.

All Air Cav battalion commanders and colors were a part of the ceremony, aside from the 1-227 Attack Helicopter Battalion, who recently returned to Fort Hood following a successful nine-month CENTCOM deployment to support Combined Joint Task Force - Operation Inherent Resolve.

“Taking the brigade colors two years ago, Col. Harper was tasked to train lethal and highly capable crews, platoons and companies, and that is exactly what he did,” Richardson said. “As we have watched from afar at Fort Hood, we have been impressed, proud, quite frankly mesmerized, but not at all surprised by how effectively 1ACB maneuvered, seizing the initiative and maintaining the momentum in a way that only U.S. Army Aviation can.”

Air Cav. has been deployed to Europe since November, its third Atlantic Resolve rotation. During the current operation, the brigade participated in multiple large-scale, joint and multinational training exercises, increasing interoperability, trust and friendships with NATO allies and partners.

These demonstrations of resolve and interdependence have been pivotal during an era of elevated tensions within the European theater of operations.

“This brigade moved a squadron task force over 1300 miles with no notice from Greece to Poland while simultaneously moving assault aircraft, crews and support to the Baltics and Slovakia,” Harper stated. “The brigade has flown over 12,000 hours during this rotation, far more than any previous rotational combat aviation brigade. I thank God for the privilege to have counted myself among this generation of Air Cavalry Troopers for the last 24 months and especially to hold the line with them here in Europe at such a critical time in history.”

Before the ceremony, Harper received the Legion of Merit from Richardson in recognition of his tenacity, vigor and excellence as brigade commander. During his command, the Air Cav. deployed to USEUCOM, USINDOPACOM and USCENTCOM to support missions all around the world.

Harper will continue his 25-plus-year Army career in Washington D.C., where he will serve on the joint staff.

Nearly 20 years after his tour as a company commander with the 11th Aviation Regiment, Jaeger returns to Storck Barracks to take the helm of Air Cav, where he is also no stranger. His first assignment as an Army aviator and Apache pilot was with 1-227th 22 years ago.

Most recently, Jaeger served with the Joint Special Operations Task Force-Somalia as the director of the Military Assistant Group, where he deployed to Mogadishu, Somalia.

“Air Cav troopers, your excellence in providing continuous support to the ground force commander during this deployment is unparalleled,” Jaeger said, beaming. “I am humbled and honored for the privilege to return to command the brigade.”