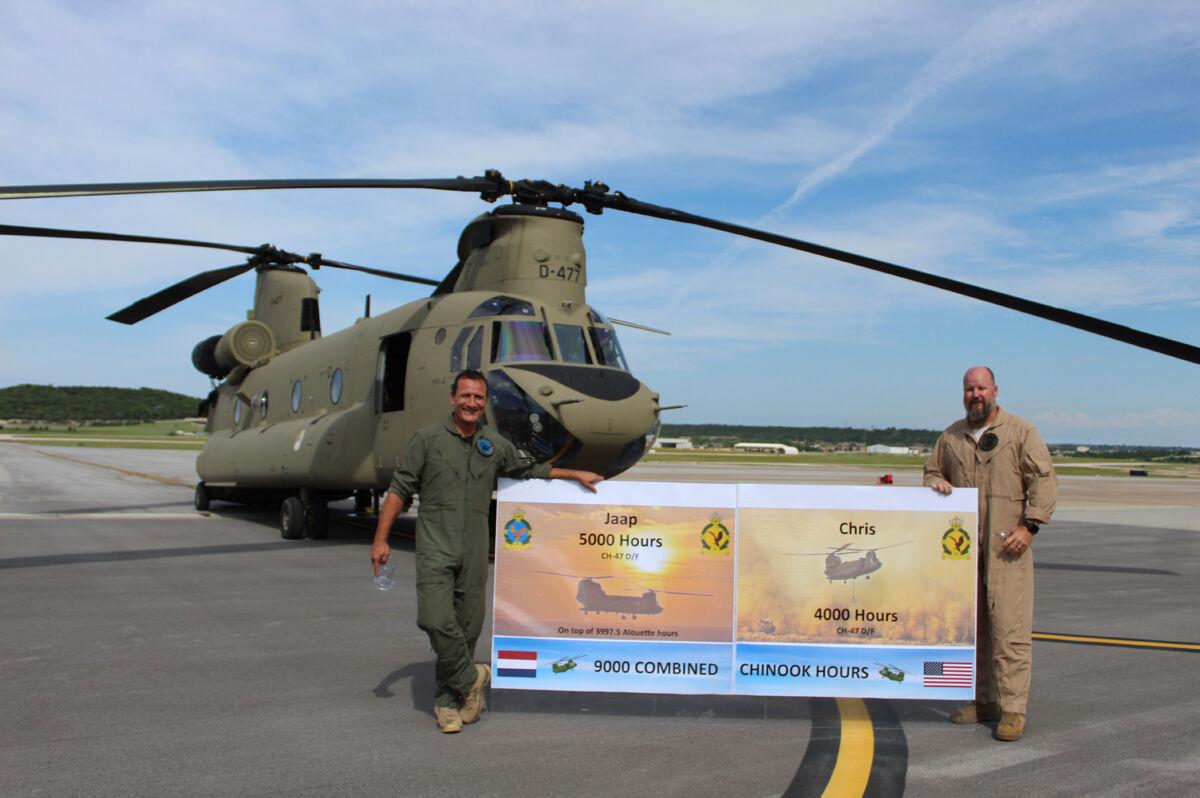 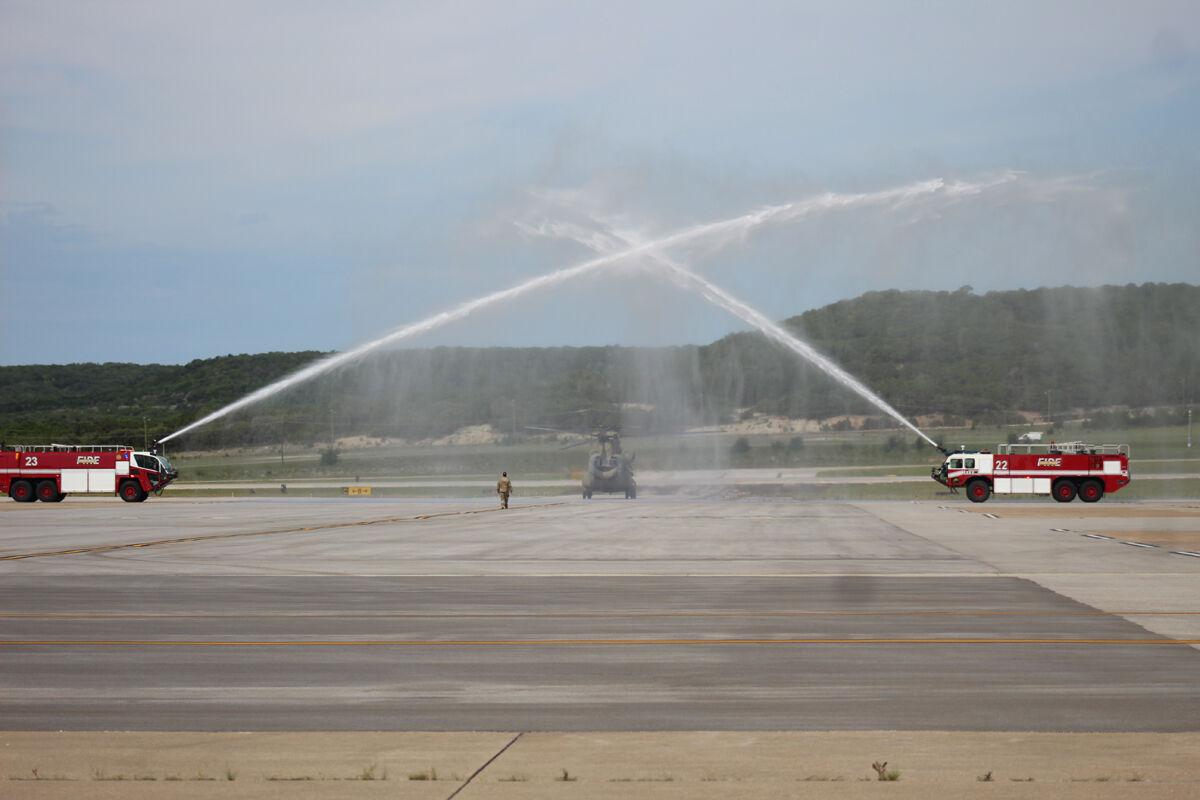 A Chinook is given a water salute by the Fort Hood Fire Department June 2 on Robert Gray Army Airfield, after two aviators each significant aviation milestones, surpassing a combined 9,000 flight hours in the CH-47 Chinook helicopter. The aviators are with the 302nd Dutch Sqdn. 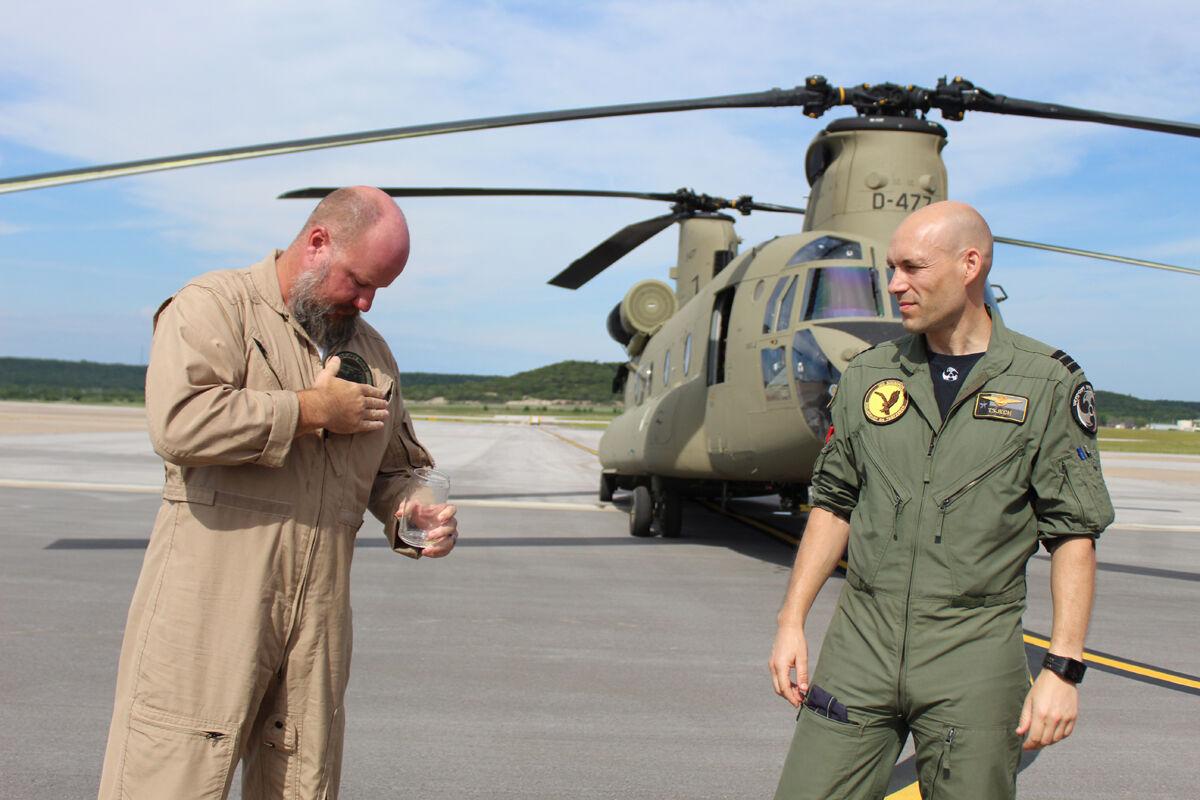 A Chinook is given a water salute by the Fort Hood Fire Department June 2 on Robert Gray Army Airfield, after two aviators each significant aviation milestones, surpassing a combined 9,000 flight hours in the CH-47 Chinook helicopter. The aviators are with the 302nd Dutch Sqdn.

“It’s a unique moment and I’m proud of both of them,” t’ Jong said.

Dutch aviator Maj. Jaap Lokker made history with 5,000 accident-free flight hours on the Chinook. During the same flight, retired Chief Warrant Officer 3 Chris Ryan, a contractor with the squadron, hit his 4,000 hour mark on the Chinook.

“The level of experience and contribution to each country is something very few people have the opportunity to do,” Tim Pool, the Team Oranje site lead for the squadron, said.

Pool said most aviators, with multiple deployments under their belts, reach between 2,000 to 3,500 flight hours. He said for aviators to achieve 4,000 and 5,000 hours is a significant accomplishment.

“To put that in perspective, 4,000 hours is about half a year of straight flying,” Pool explained. “That’s a lot of time in one seat.”

Lokker joined the Royal Netherlands Air Force as an aviator in 1980. After flying 3,997.5 hours in the Alouette, a French light utility helicopter, he became the first Dutch aviator to go through flight school at Fort Rucker, Alabama, to be trained on the CH-47 Chinook.

“I’ve been flying for over 40 years,” Lokker said. “I have the most hours because I was the first and I continued to fly.”

Lokker said hitting the 5,000-hour milestone was special because both he and Ryan reached

milestones together, and together had 9,000 hours of Chinook experience during that flight.

Ryan, who retired from the Army in 2018, thought he would never fly the Chinook again, until he began working as a

contractor with the 302nd

Sqdn. two years ago. The 20-year veteran serves as an instructor pilot, standardization pilot and instrument examiner for the squadron.

“When I retired I never thought I would fly Chinooks again, but it feels great,” Ryan said. “I enjoy this, I love it. It’s a great opportunity working with the Dutch out here and continue to keep flying.”

Lokker now has the 6,000-hour mark in his sights, although he said he has to retire in three years.

“Maybe I’ll come back as a contractor,” Lokker added. “Because I’m looking forward to continuing to fly.”