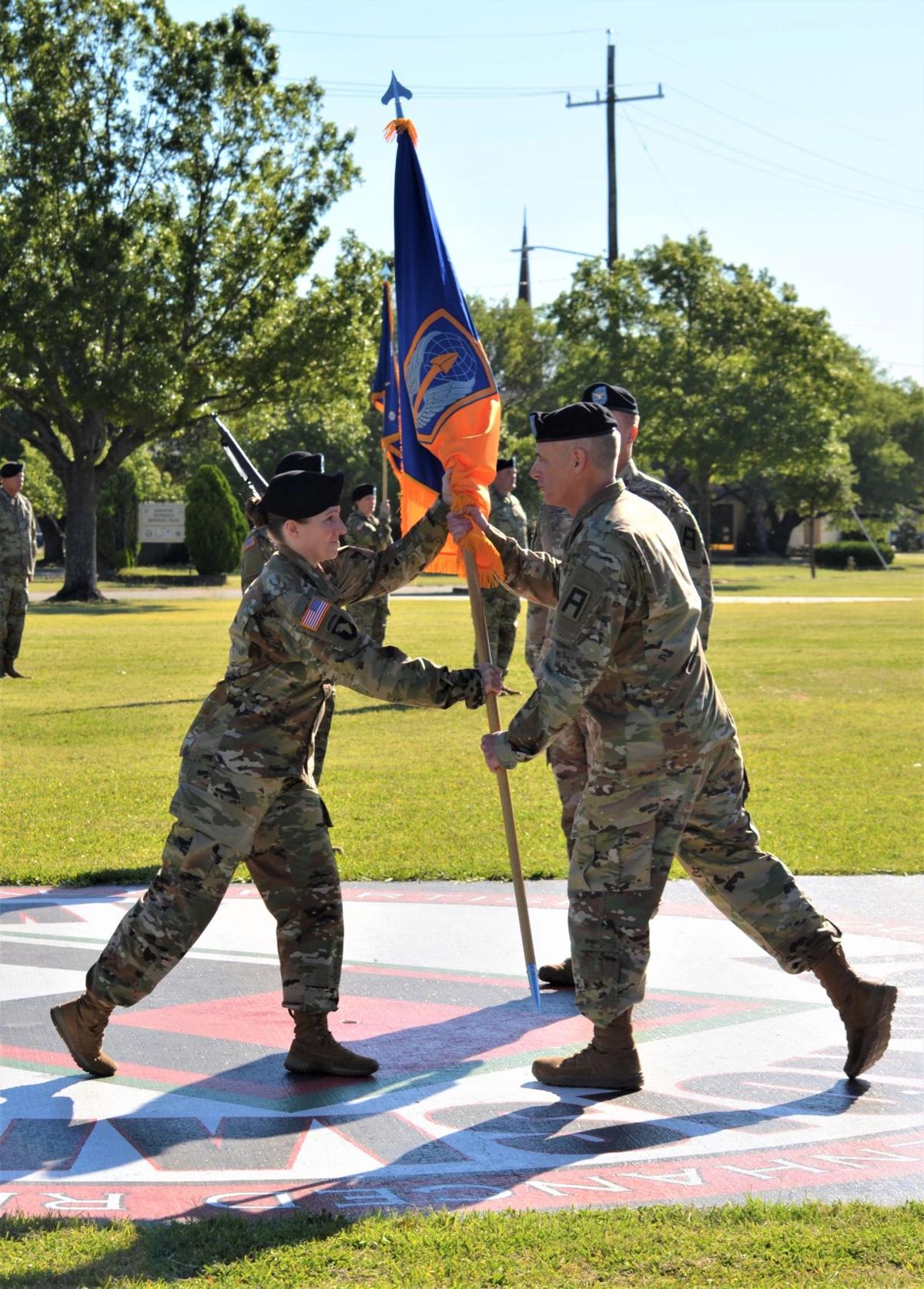 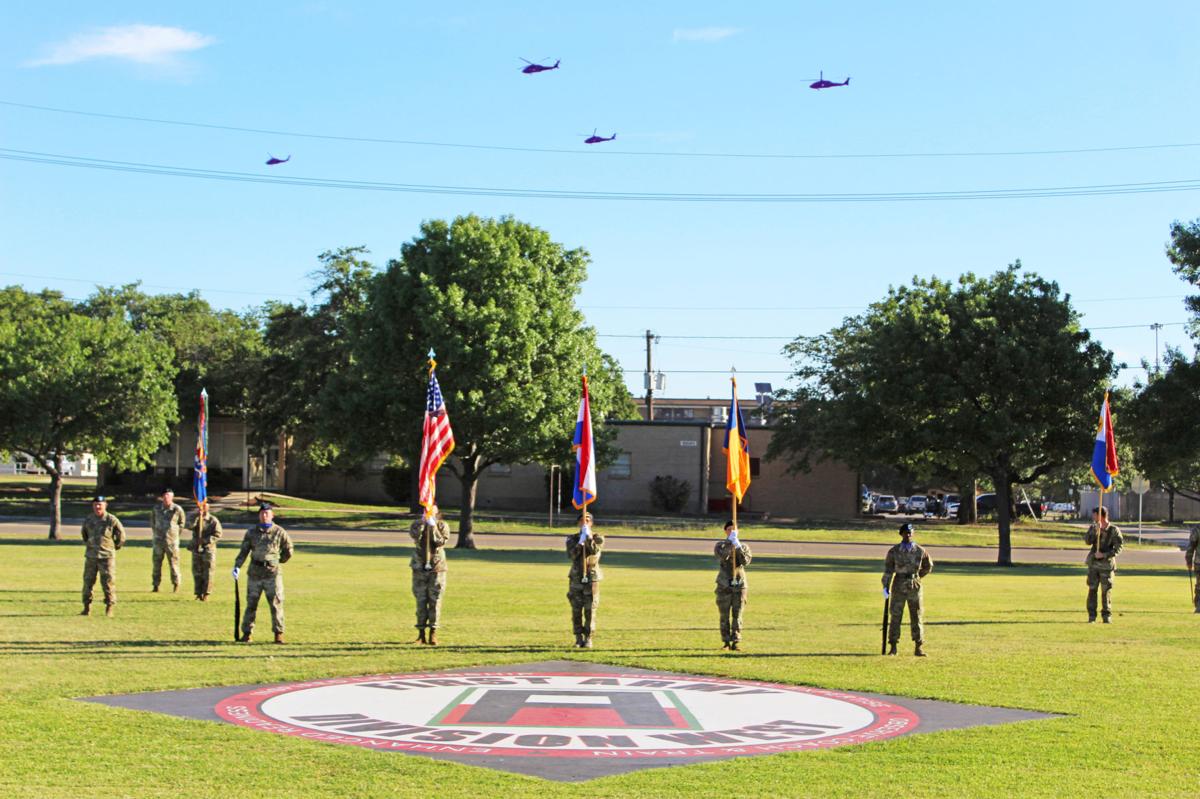 A formation of UH-60 Blackhawks fly overhead as the the change of command ceremony for the 166th Aviation Bde. begins, June 11, at Cameron Field. The flyover was unexpected, but uniquely fitting for the aviation change of command. 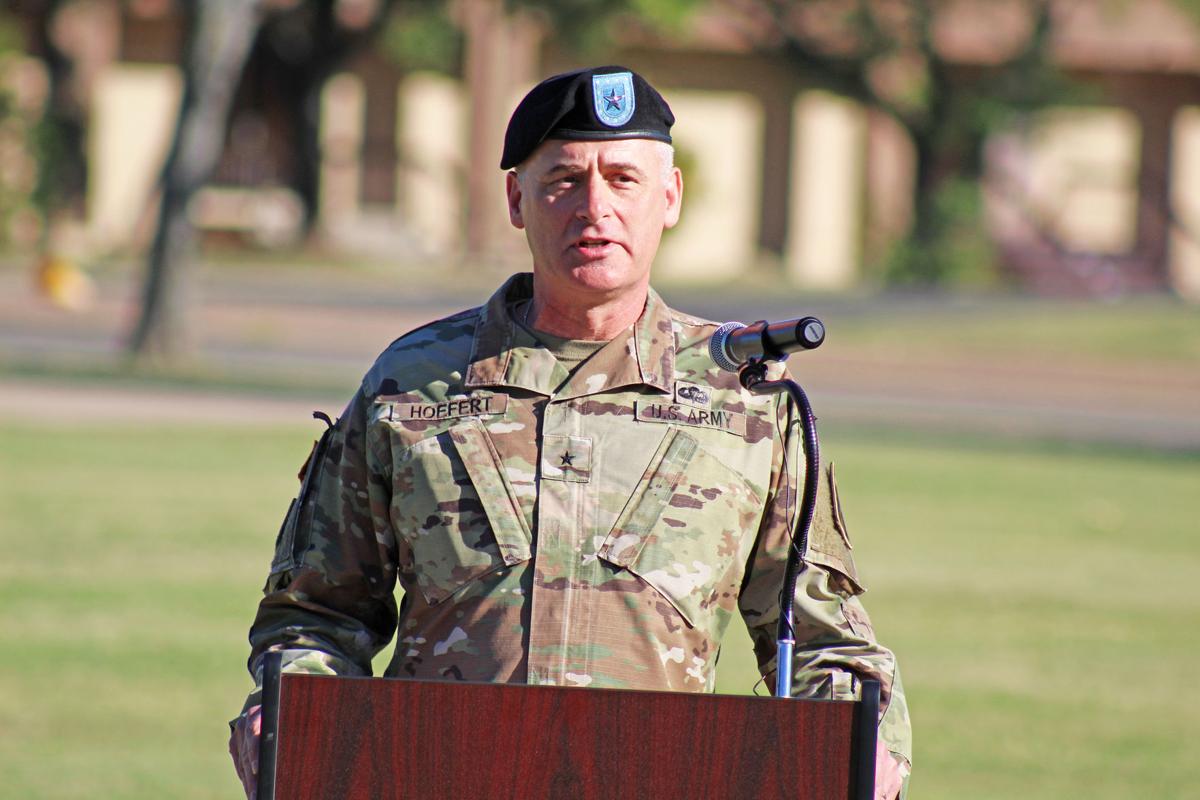 A formation of UH-60 Blackhawks fly overhead as the the change of command ceremony for the 166th Aviation Bde. begins, June 11, at Cameron Field. The flyover was unexpected, but uniquely fitting for the aviation change of command.

More than two years after the unit was established at North Fort Hood, the 166th Aviation Brigade changed commands, June 11, on Cameron Field, which kicked off with an unexpected aviation fly-over.

“I normally like to start these events with a discussion about the history or a story of the unit and we like to talk about how the leader is leaving the organization better than he or she found it. It’s not true in this case, though, because two years ago, this organization did not exist, so Ron, you had nowhere to go but up – great work,” Brig. Gen. John Hoefert, deputy commanding general of First Army – Division West, said with a laugh and thumbs up at Col. Ronald Ells, outgoing commander of the 166th Aviation Bde.

Looking back at his time at Fort Hood, Ells said he arrived in early 2018 as “Soldier number 12” of the unit.

“I’m absolutely amazed at how far this brigade has come in the last 26 months,” Ells said. “Us ‘dirty dozen’ were patching holes in the walls, painting the hallways and buffing the conference room floor,” he said.

Since taking command, the 166th renovated the hangars at Longhorn Auxiliary Landing Strip, repaired and replaced electricity and repaired other safety issues, as well as conducting the necessary training of National Guard and Army Reserve units, which make up more than 50% of all Army aviation assets.

The Archangel Brigade oversees the training validation of thousands of National Guard and Reserve troops from across the United States, preparing them for deployment. To train the Soldiers, they first have to figure out their strengths and weaknesses, then improve them further. As missions change downrange, training changes with it, including simulating multiple command posts.

Under Ells’ leadership, the Archangel Brigade also trained more than 600 Dutch aviators and certified more than 1,200 Soldiers from the Dutch Air Mobile Brigade for their deployments. In a unique partnership with the Royal Netherlands’ Army and Air Force, the 302nd Dutch Squadron is one of the units within the brigade.

The partnership allows the commander of the 166th Aviation Bde. to lead a brigade-level coalition of aviation forces, train them collectively and certify them for deployment. As Ells passed the torch to Col. Jennifer Reynolds, incoming commander, she now leads the training of the coalition of American and Dutch aviation forces.

In front of a minimally manned formation and a socially distanced audience, Ells passed the brigade colors to Hoefert, who in turn, passed the colors and its symbolic responsibilities to Reynolds.

“Lt. Gen. (Thomas) James and Maj. Gen. (Frank) Tate, thank you for this unbelievable opportunity,” Reynolds said. “I am extremely excited and humbled.”

Addressing the units within her new command, Reynolds assured them they have her trust and confidence, while also promising to work every single day to earn theirs.

One person who already has confidence in her abilities is her predecessor, who said he would be watching her succeed from his new position as deputy commander of the U.S. Army Combat Readiness Center at Fort Rucker, Alabama.

“I’ll be watching from the CRC, the trajectory with which the next team’s gonna take this,” Ells said, “because I guarantee we’re not done growing yet.”