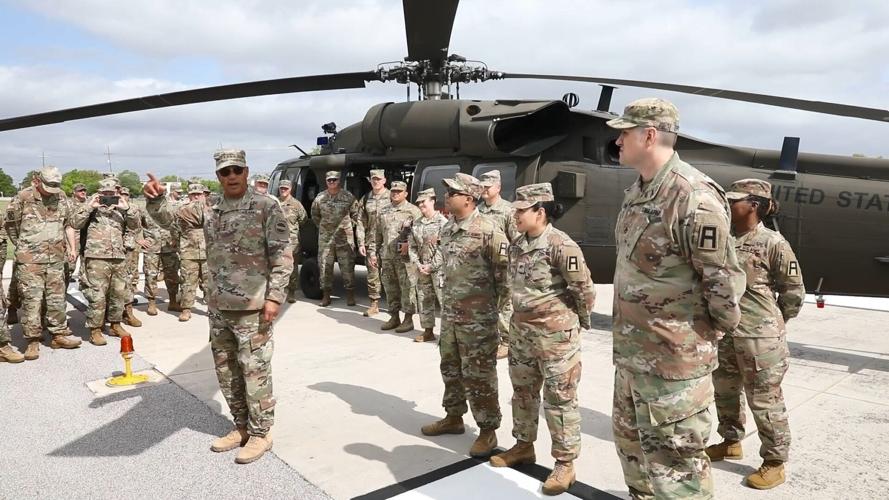 Soldiers and guests of Division West – First Army formed up and then gathered around a parked UH-60 Blackhawk helicopter to observe a safety awards ceremony held at the Longhorn Division’s helipad in Fort Hood on Wednesday morning.

After recalling a praise received from U.S. Army Reserve Command’s safety directorate last month, Garrett reflected on the importance of promoting safety awareness and recognition across all FORSCOM.

“I try to hand out all of the significant safety awards because safety is a commander’s business, and safety, especially when we’re talking about Army aviation, is embedded in our culture. We generally do that very, very well,” he said. “Soldiers make safety happen not by doing ‘big’ things, but by doing the small attention-to-detail things every single day. It’s also about not walking past something that you know is wrong without doing something about it.”

“I know this award states ‘individual’ on here, but this doesn’t happen without all the outstanding individuals in our brigade’s formation today,” stated Lazzara. “If they are not doing the right things, then things like this don’t happen. Thank you.”

“I am very happy to visit and see Brian receiving this prestigious award today — he’s got quite a growing collection of them!” she said. “The family and I are very proud of him, and we are very glad to have these moments together at Fort Hood.”

The next award presented was the 2021 FORSCOM Exceptional Organization Safety Award accepted by Col. Jennifer A. Reynolds, commander of the 166th Aviation Bde. alongside the brigade’s Command Sgt. Maj. Roque R. Quichocho.

“Today’s recognition is an example made by Mr. Lazzara, but also by the formation. Like what Gen. Garrett was stating earlier on how well we make difficult things look simple, this formation does it each and every day,” Reynolds said. “Every time I see what you all do for about 50% of U.S. Army Aviation with an immense responsibility on your shoulders, you always do it exceptionally well and you do it very safely.”

Reynolds was entering her last month as commander of the Archangels Brigade at the time of these remarks.

“I could not be more proud of this formation and it’s been an honor to serve with you,” she added. “Command Sergeant Major and I are very gratefully to accept this on behalf of the entire brigade because it’s the formation that earned it, not us.”

Prior to take-off for an aerial tour of Fort Hood’s training complexes, the ceremony concluded with Garrett passing out a few FORSCOM challenge coins to Soldiers and ordering them to announce and reward the coins to other Soldiers from the audience.