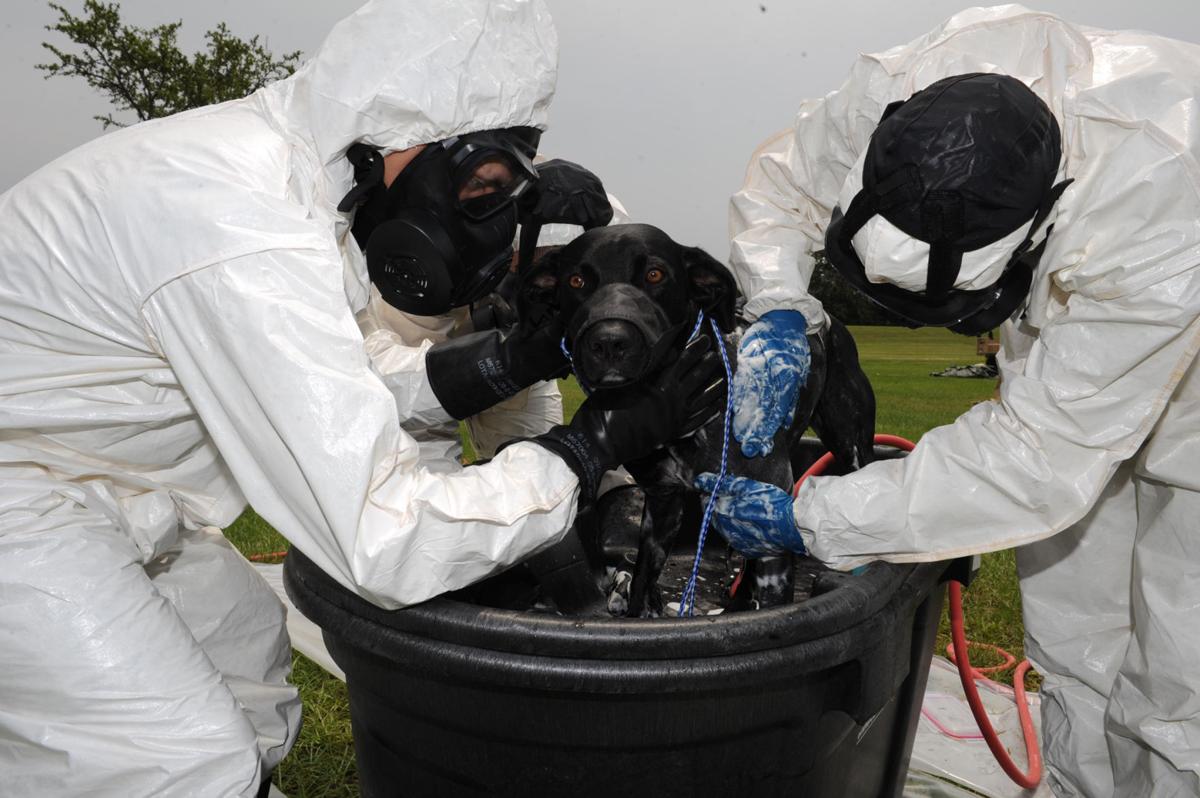 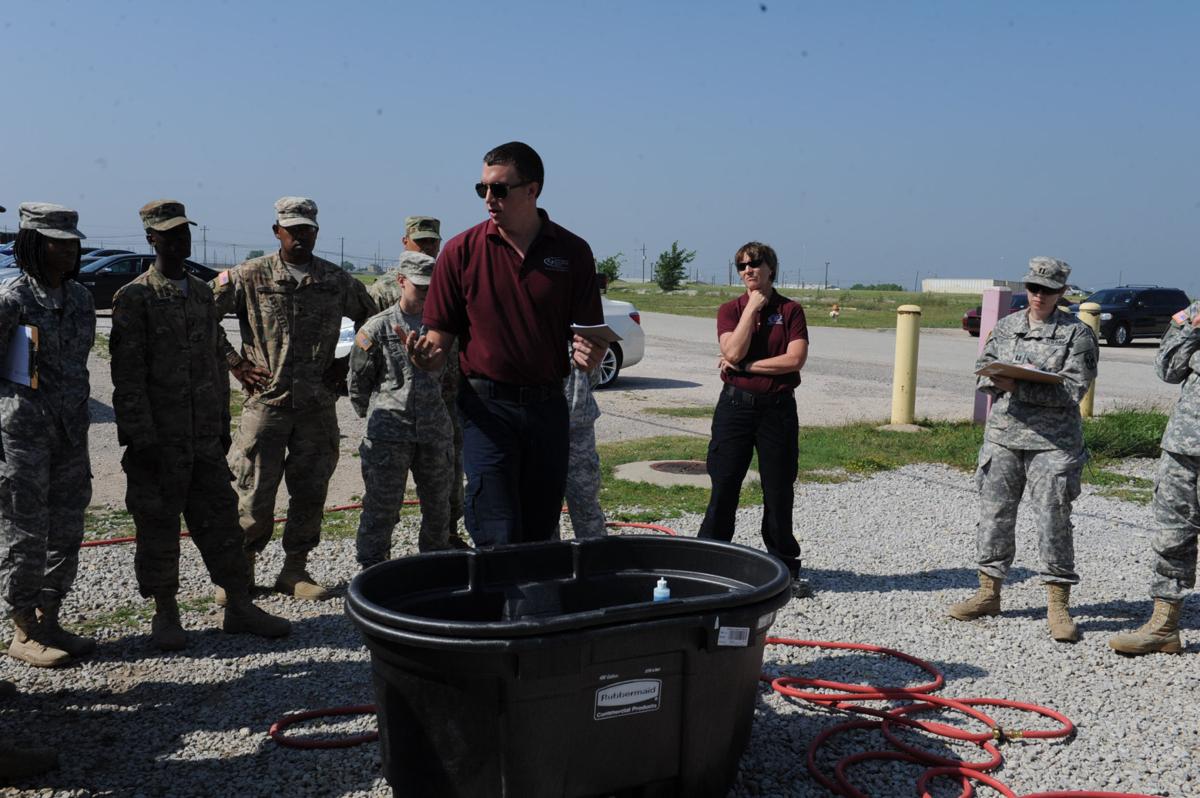 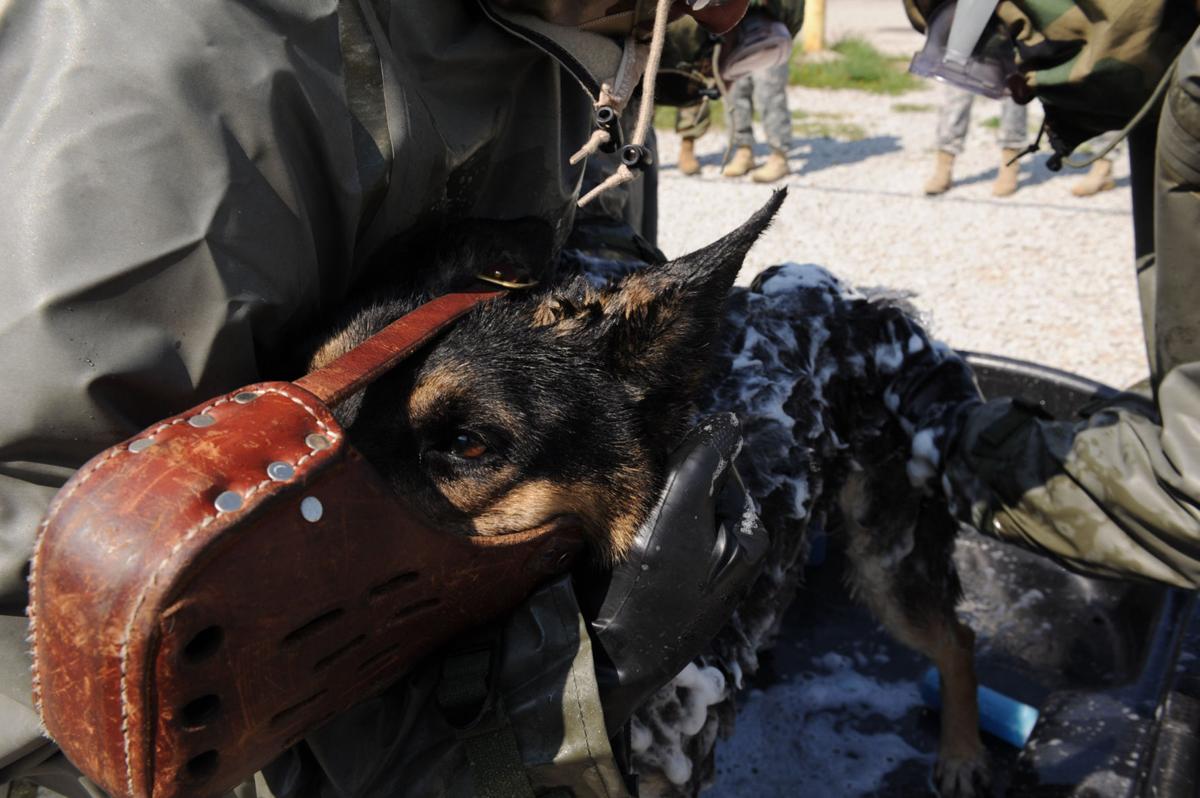 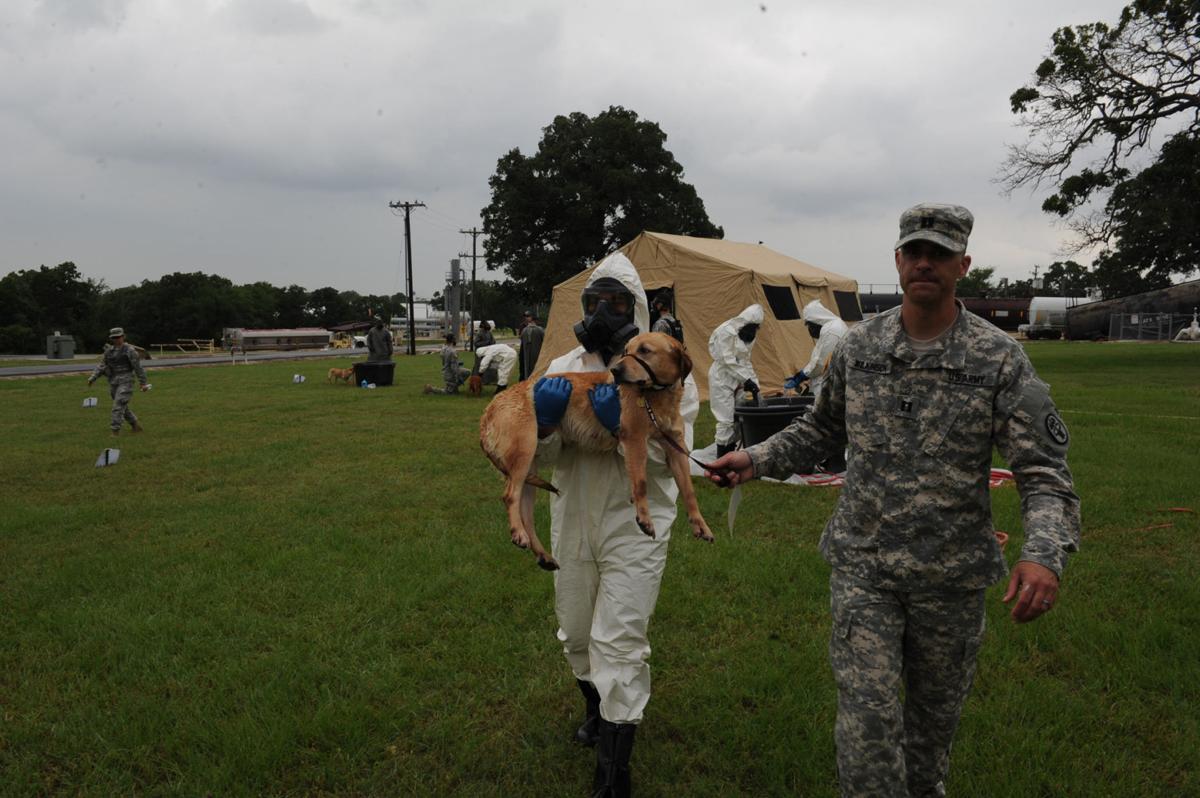 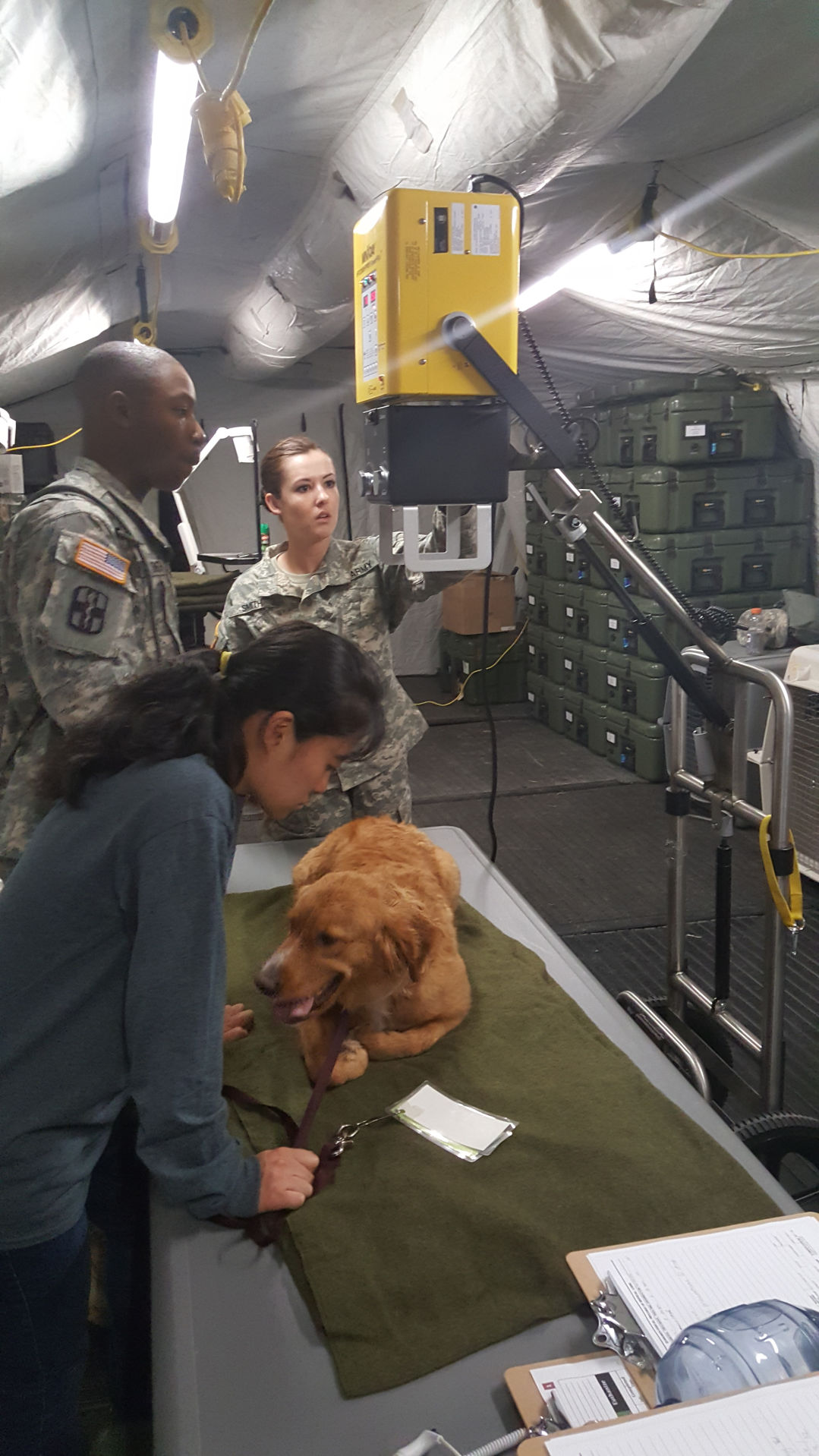 Capt. Richard Blair, a veterinarian with 43rd Vet. Det., examines Zapp, a search and rescue dog from Texas Task Force 1, before a chemical decontamination bath at Distaster City, outside of College Station, May 12. 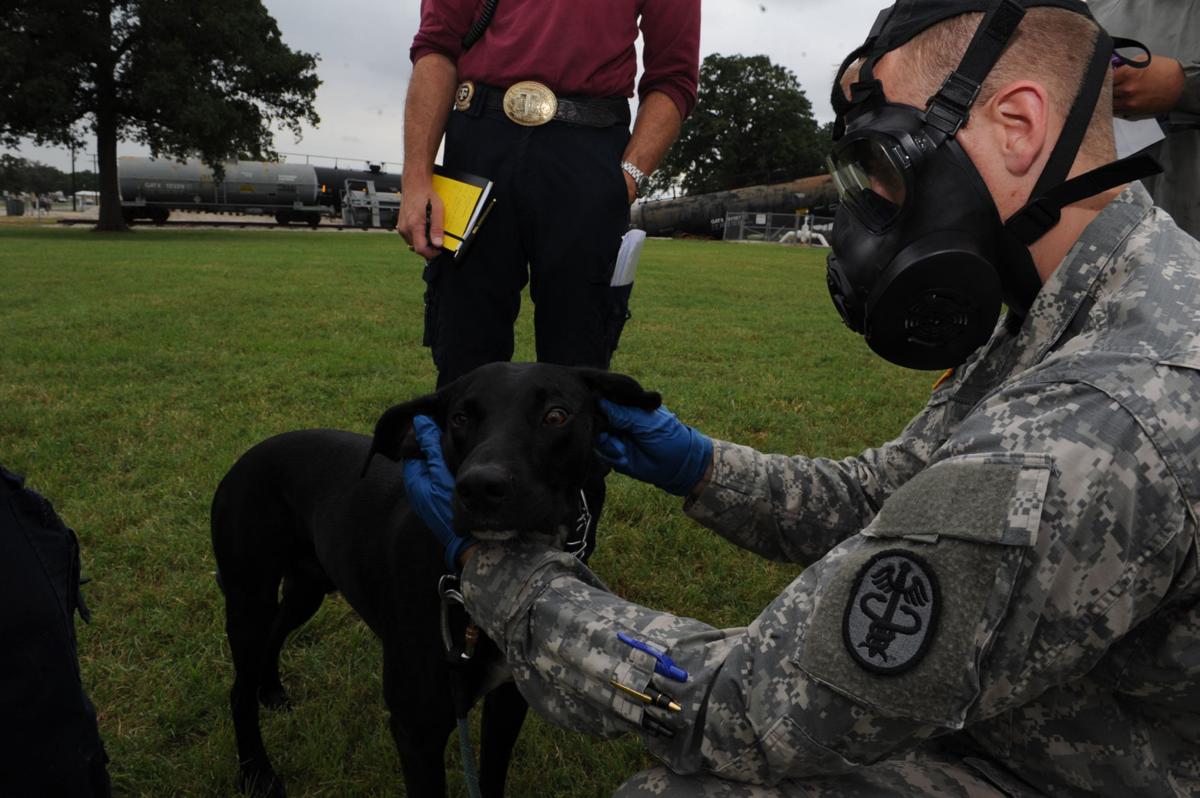 Specialists Vincent Smith and Cassidy Smith, both animal care specialists with the 43rd Vet. Det., work on a simulated injury to a search and rescue dog inside their field veterinary hospital May 12.

Capt. Richard Blair, a veterinarian with 43rd Vet. Det., examines Zapp, a search and rescue dog from Texas Task Force 1, before a chemical decontamination bath at Distaster City, outside of College Station, May 12.

Specialists Vincent Smith and Cassidy Smith, both animal care specialists with the 43rd Vet. Det., work on a simulated injury to a search and rescue dog inside their field veterinary hospital May 12.

Veterinarians and animal care specialists from Fort Hood spent a week working to establish how the Army assists first responders to national disasters through a training partnership with Texas A&M University May 9-Saturday.

According to Lt. Col. Carl Shaia, commander for the 43rd Veterinarian Detachment, the Army currently does not have set procedures on how to provide decontamination efforts for animals, especially search and rescue and military dogs.

“The concept has been discussed at echelons above us,” Shaia explained. “It is the mechanics that have not been well established.”

Detachment members trained alongside experts from TAMU’s Veterinary Emergency Team both on and off the installation learning how best to provide chemical, biological and radiological decontamination for animals working the response as well as family pets caught in the crisis.

“We’re trying to work out the wrinkles,” Staff Sgt. Paul Cota said. “Disaster response usually focuses on people, but there is not a lot of emphasis on animals.”

This June, the 43rd Vet. Det. will assume a first responder mission should a chemical, biological, radiological or nuclear accident happen anywhere in the United States. As part of a larger decontamination task force, the Army is counting on the detachment’s Soldiers and veterinarians to be the technical experts when it comes to providing animal medical care.

“It is very important to me to know what right looks like before assuming the (chemical response) mission,” Shaia said. “My concern was how to become experts. We’re very fortunate that TAMU is the tip of the spear with response effort.”

Formed in 2009, at the request of Texas state officials after Hurricane Ike, the Veterinary Emergency Team is made up TAMU veterinary school staff members and volunteer veterinarians from around the state, said Dr. Deb Zoran, the team’s medical operations officer. As the largest and most sophisticated veterinary medical disaster response team in the country, the experts from College Station have most recently worked the wildfires in Bastrop as well as search and rescue efforts across the Lone Star state.

Broken up into three phases, the training started on Fort Hood with classroom and small scale decon training with the help of military working dogs from 89th Military Police Brigade. While the training might have looked like giving a dog a bath, Staff Sgt. Cota and his Soldiers had to work through all of the critical details of working safely in a chemical environment. “There’s a real technique to deconning a dog,” Cota said.

Issues of patient flow from a “hot” contaminated area to a “cold” clean one, coupled with keeping working dogs and handlers together, allowed Cota and his team to fine-tune their procedures on post before convoying to College Station for a full-scale, two-day exercise at TAMU’s Disaster City.

Located near the TAMU campus, the 52-acre training facility features full-scale, collapsible structures designed to simulate various levels of disaster and wreckage. In addition to providing access to the rest of the Vet Emergency Team staff, the university’s veterinary school also provided 15 dogs to stand in as “victims” of a chemical plant explosion scenario for the unit to train with.

Detachment Soldiers set up triage, decontamination and treatment stations, including a veterinary field hospital complete with laboratory, x-ray and surgical capabilities for the exercise.

By using TAMU staff to evaluate their methods, the unit was able to practice and refine their plans during the two-day mission.

“This training will help tremendously,” Cota said. “There’s always going to be disasters. This is something we have to figure out now. We’re working against the clock; it’s not a question of if, but when.”