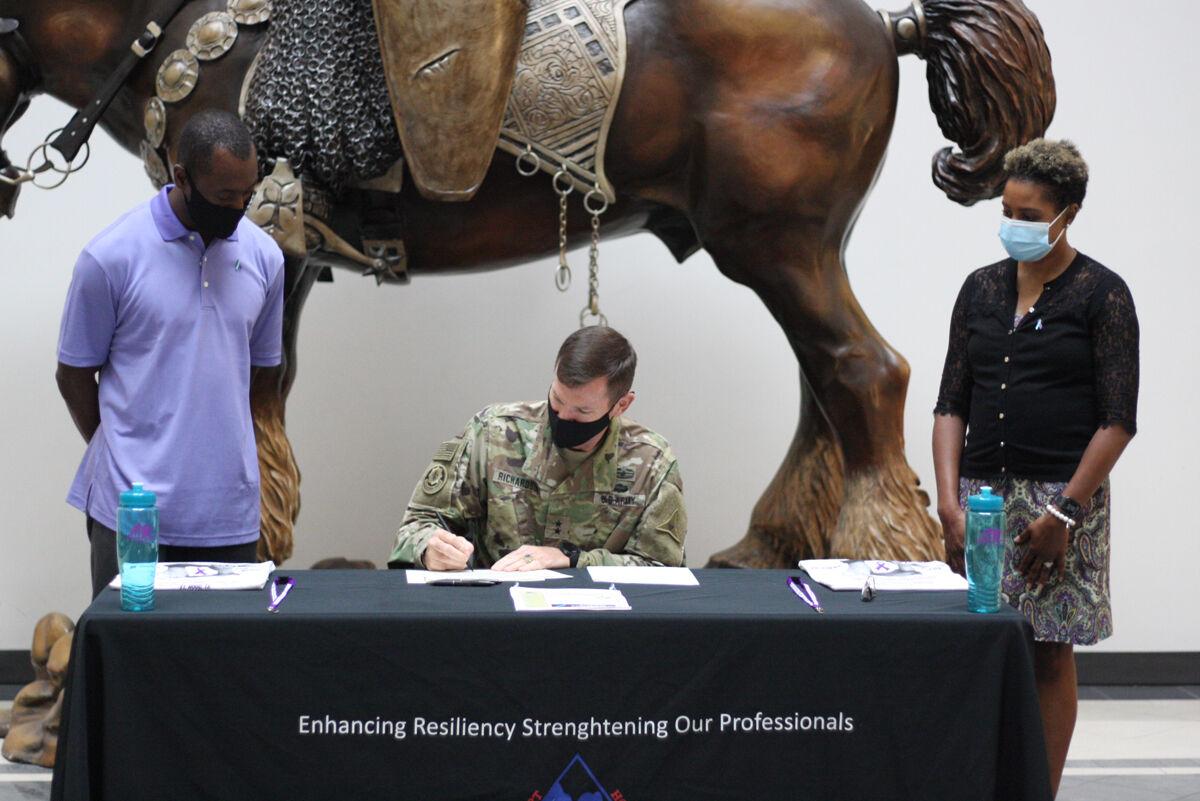 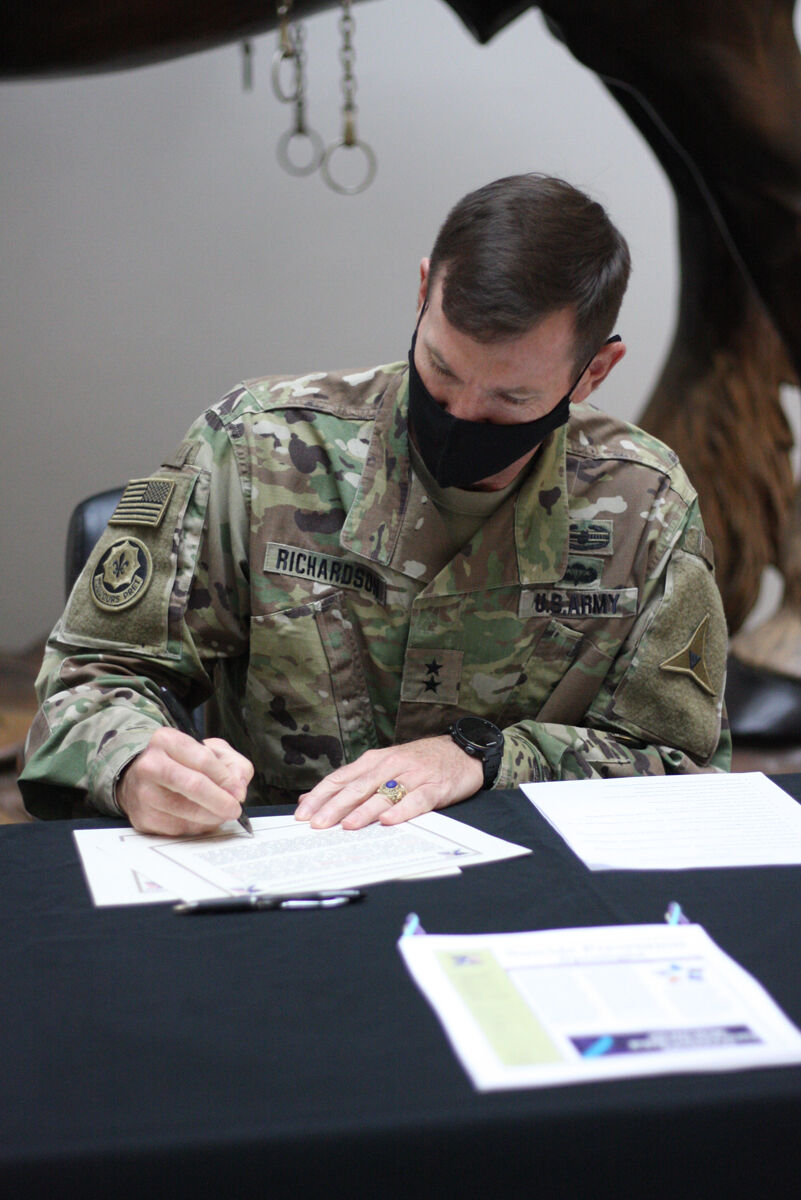 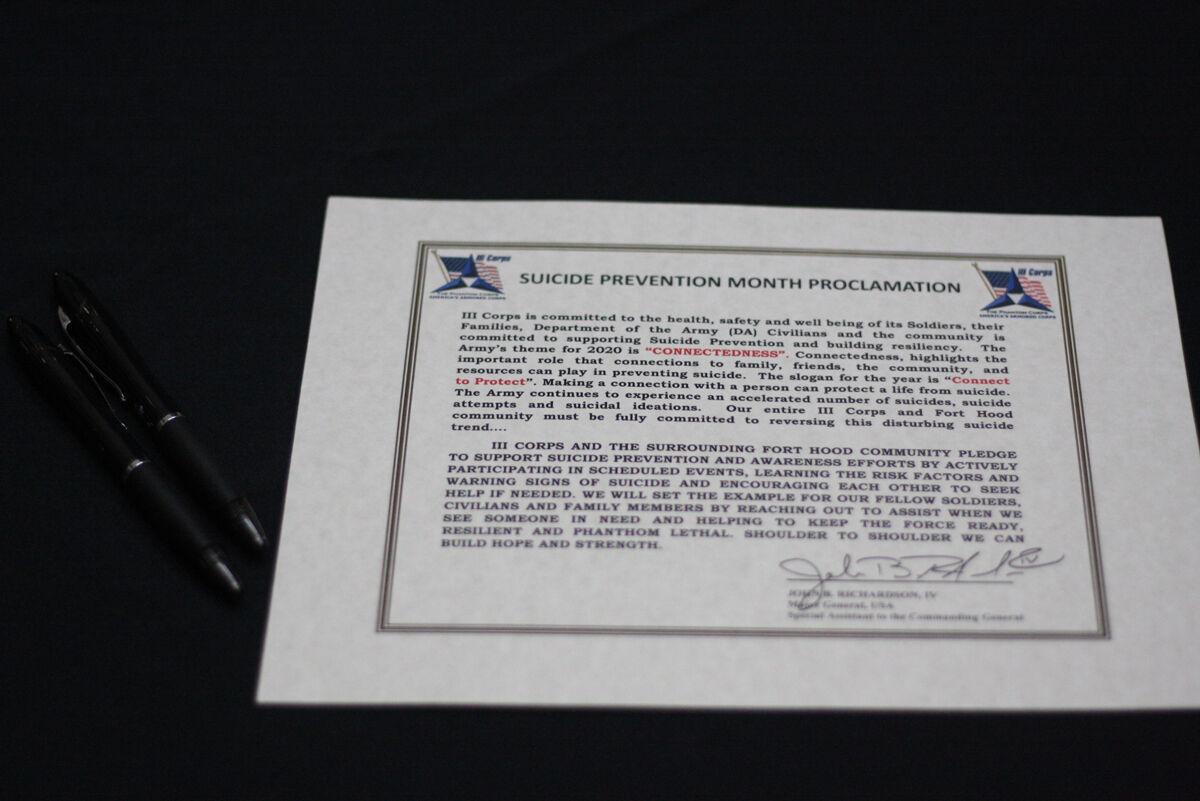 The themes of the Suicide Prevention Month Proclamation, and the month itself, are “Connectedness” and “Connect to Protect.” Maj. Gen. John Richardson IV, incoming III Corps deputy commanding general, signed the proclamation Tuesday in the West Atrium at III Corps Headquarters.

The themes of the Suicide Prevention Month Proclamation, and the month itself, are “Connectedness” and “Connect to Protect.” Maj. Gen. John Richardson IV, incoming III Corps deputy commanding general, signed the proclamation Tuesday in the West Atrium at III Corps Headquarters.

“Connectedness” and “Protect to Connect” are the themes for this year’s Suicide Prevention Month. Putting these concepts into action, Soldiers and their families will feel more connected to their civilian and military communities and all of the resources that they provide.

These two themes along with building more cohesive teams are the goals the III Corps and Fort Hood Soldiers will be working toward, according to Maj. Gen. John Richardson IV, III Corps deputy commanding general, said during a Suicide Prevention Month proclamation signing ceremony held Tuesday at III Corps Headquarters.

“People who are killed by suicide are people who feel isolated, disconnected, and a Soldier should never feel that way,” said Richardson, who officially became the deputy commanding general for operations of III Corps and acting senior commander of Fort Hood at a ceremony Wednesday.

“If you have cohesive teams, you always have your squad, your team and your leaders to fall back on,” he added. “That’s where we have to apply time and effort into building these cohesive teams, so that every Soldier feels connected and never feels isolated and always feels like they have somebody to come to before they make a decision that can’t be reversed.”

With September being Suicide Prevention month, reducing the stigma of asking for help and also raising the comfort levels of those who have to ask their friends and loved ones that difficult question, “Are you thinking about committing suicide?” are key to the overall, long-term effort of eliminating the suicide epidemic, according to Kenya King and Jannan Melendez, both Suicide Prevention Program managers for Fort Hood, and experts in their field who train Soldiers and civilians on post how to approach and help someone who might be thinking about committing suicide. That effort starts with really and truly knowing those around you.

How do you get to know someone well enough to catch some of the more common warning signs? It might seem overly simple, but it’s as simple as talking to someone. Setting aside some time during the day or week and having meaningful, regular conversations with one’s Soldiers and coworkers is a way, King said.

“The more we have conversations, the more comfortable people get with asking the questions and picking up on signs, and with checking in, with taking their responsibility to look out for one another,” King said.

“Sometimes, what it boils down to is really getting to know people on a deeper level,” King added. “Sometimes, we think just because ‘John’ comes in in the morning and drinks all the coffee out of the pot and doesn’t make another pot, that’s all we know about him, but what makes that person tick? What gets them upset? What motivates them? What makes them happy? What makes them sad? The more conversations that we have with each other, the more we learn about each other, and then it makes it a little easier to spot those warning signs when something may be off.”

Melendez said that talking about suicide, specifically on a more regular basis, in the ranks lessens the taboo of topic. Normalizing the topic to the point that a person can talk about it with the same ease that one talks about a sports injury leads to those in need being more likely to reach out for help.

Having those conversations and building that cohesive team in which Soldiers truly know one another allows them to more easily pick up on warning signs. And those vary by person, King said.

Warning signs may include things as obvious as talking or joking about suicide, big mood swings from happy to sad, or even from sad to happy. The signs may be less obvious because a team mate might be hiding their emotions. Sometimes it’s knowing a person’s professional or personal situation. Has that person been through divorce recently? PCS’d and had difficulty making new friends? Has that person been subject to Uniform Code of Military Justice punishment? The signs vary widely by the individual, which enforces the concept of really making time to get to know those around you, according to King.

“We have to realize, as humans, we are sometimes in difficult situations and circumstances, and some of those we are prepared for, and some that we aren’t,” Melendez said. “Suicide is basically when someone is at their breaking point. And as humans, that could be any one of us at any time.”

If a person suspects that a coworker is at his or her breaking point, they have to be comfortable with asking that hard question, King said. And that can be awkward and difficult, but that awkwardness can be overcome.

“I think a lot of individuals, when it comes to that realm of dealing with an individual that may at risk of suicide, it’s always that question of, “What next?” King said. “I’ve asked that question. Everything is on me. Now, what do I do? What we teach is that we just need you to ask the question. Because there is a wealth of resources out there for that individual, where you don’t have to feel like you’re the only one and that sole responsibility falls solely on you.”

Both King and Melendez stressed the importance of just being with that person who needs help and listening.

“One of the things I think that we really have to let individuals know is just operate within your role,” King said. “If you don’t feel comfortable really talking with the person, talk with them long enough to let them know, ‘Hey, I really care about you, but I’m uncomfortable with this.’ You’re being honest with the individual.”

That’s the point where a person calls for help to have the person thinking about taking their own life the rest of the way, to a recovery, King said.

“It’s all about a relay race,” King said. “You don’t run the whole race by yourself. Even us, we are very highly trained and skilled individuals. Some of us are counselors, social workers, or mental health workers in the Suicide Prevention Office, but with that, we want to do our role. I get the individual on the phone line and do a battle hand off with somebody else. That way, everything doesn’t fall on one individual. Everyone takes an active part in helping the individual hopefully save their life.”

Editor’s Note: This is part one of a four-part series the Fort Hood Sentinel is writing in regards to the Army’s Suicide Prevention Program. If you or someone you know needs help, call 1-800-273-TALK (8255) for immediate assistance from a counselor. Help is available 24/7. If one doesn’t remember the number, call 911 or go to the nearest emergency room.