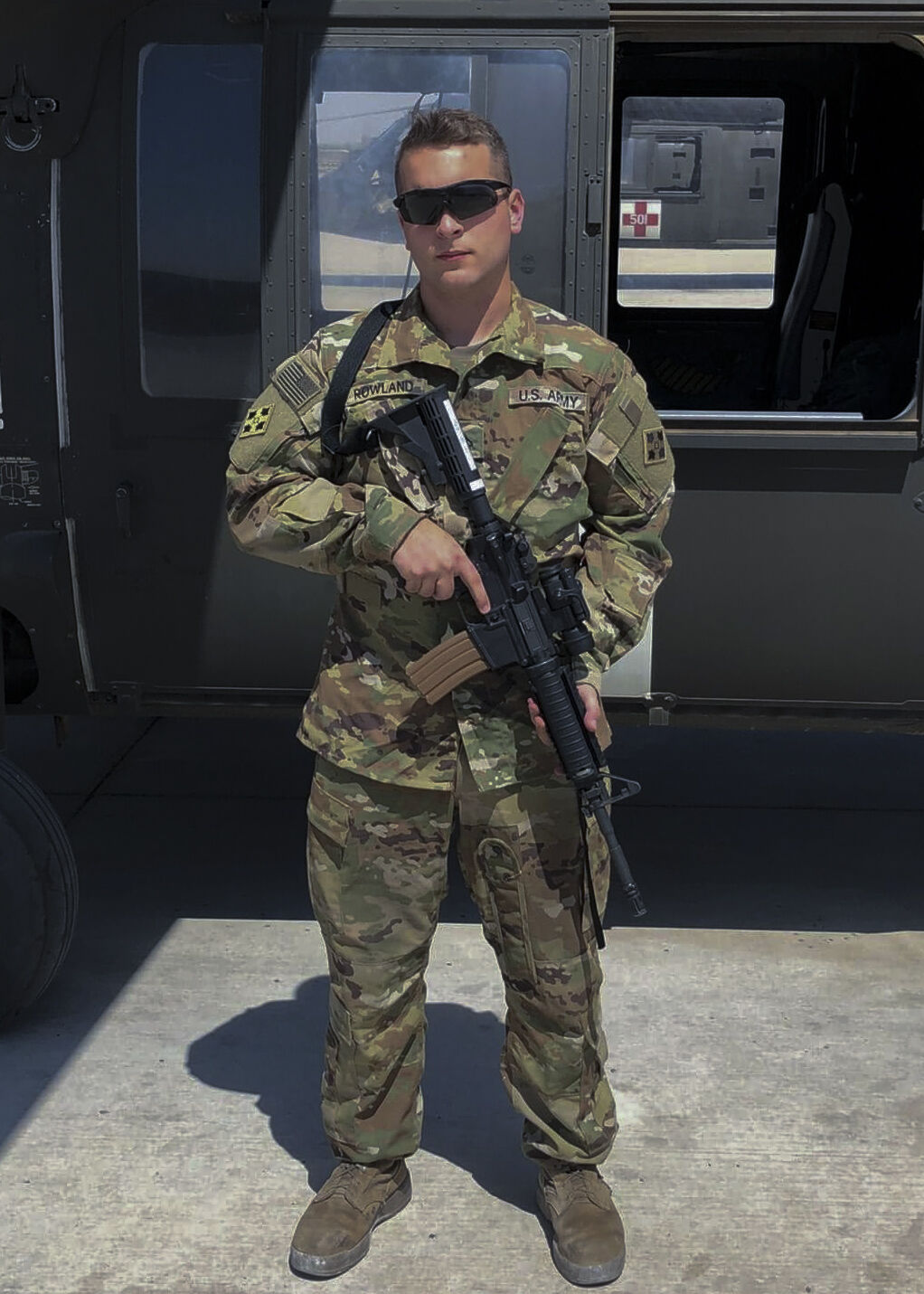 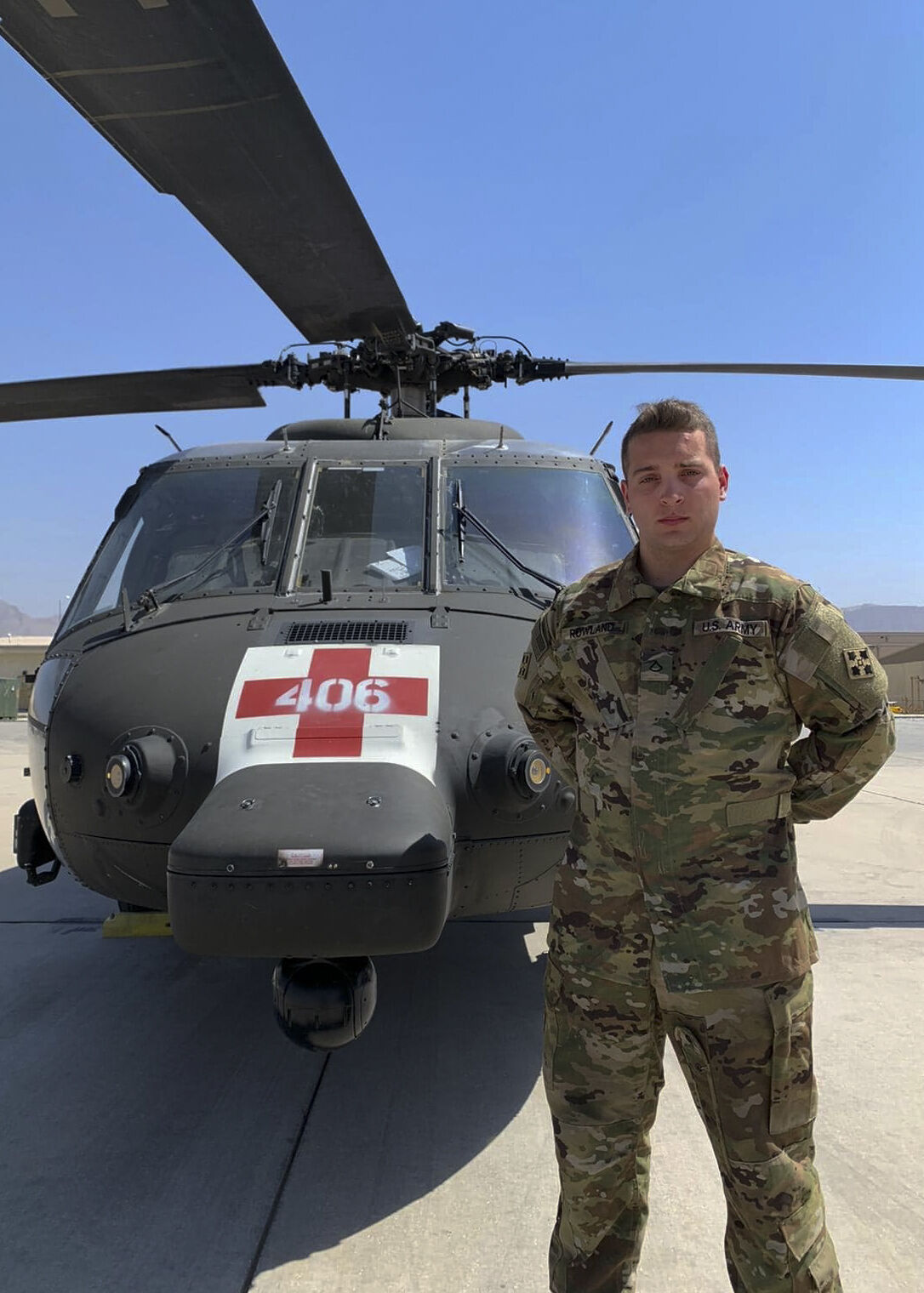 BAGRAM AIRFIELD, Afghanistan — The Soldier climbed the stairs at customs, looking around. Pfc. Tyler Rowland wasn’t sure where the person he was supposed to be meeting was at. Then, a Soldier separated from the group and came over to him, holding out his hand to shake it.

It was in that moment Rowland realized that he was shaking hands with his older brother, he said.

Rowland and Cox spent 20 minutes together talking, Rowland said. Despite the 18 year age gap between the two brothers, he said the conversation was easy and like they had just talked the day before.

“It felt surreal,” Rowland said. “Actually meeting him for the first time, it was amazing.”

“I said, ‘Are you kidding me right now? This is crazy!’” Cox said. “I never heard of this before. I was absolutely floored. I was so ecstatic I didn’t know what to say. I hadn’t seen him since I joined the Army in 2001 and at that time he was still in diapers. Now here he is in front of me, a grown man, in the same uniform I’m wearing, on his first deployment and me coming off my sixth. It was quite a remarkable thing to actually get to see him as a full-grown adult.”

The brothers, from Gig Harbor, Washington, say that even though there was physical distance between the two, the bonds of family have always been strong. Rowland’s mother, Andi Larsen, was Cox’s step mother, but raised him from the time he was five until he joined the Army.

“Tyler has heard me talk about his older brother Ben his whole entire life,” Larsen said. “It was strange that he never met him, but by talking about him and showing Tyler pictures, I kept him alive and made Ben real for him.”

Rowland and Cox’s reunion is a unique one. Rowland said he had no idea the amount of people that would work to give the two brothers the chance to meet.

“I had no idea the entirety of 4th CAB was going to be involved, but I was in awe,” he said.

Lt. Col. Tyler Partridge, the battalion commander for 2nd GSAB, 4th Av. Reg., said that this event is an important reminder that leaders should always take care of their Soldiers.

“I hope that Pfc. Rowland and Staff Sgt. Cox are able to forge a relationship that will serve to improve their mutual resilience as both continue service to our nation in the Army,” Partridge said. “While we have continuous requirements and missions, leaders must not forget that in the absence of our most precious asset – our people – our unit cannot accomplish the tasks at hand. I want the Mustangs to understand that nothing is more important to Ivy Division leaders than our Soldiers and their families – that even on the eve of combat and in the face of a myriad of challenges, their leaders will strive to elevate their needs, concerns and desires.”

Cox said that he appreciates what his leaders did for him as well.

“I have leadership on both sides of the fence,” Cox said. “I’ve had some that said it’s just about the accomplishment of the mission, we’re loading up aircrafts, we’re leaving. And then I’ve had leadership, like my leadership today that say, ‘Hey, hold off. The aircraft doesn’t leave till this time and we can put you on 20 minutes prior before we leave, literally. We’re going to hold you as long as we can.’ It’s interesting to see the human aspect of people, and not just the leadership aspect of a person.”

Despite the age difference and the years apart, Cox said that he and his younger brother are very similar. Both enjoy working on cars and things mechanical, and both are very stubborn when they put their minds to things. When Cox found out that Rowland was thinking of joining the Army, he also made sure to give him advice. Cox said instead of following in his path and being a wheeled vehicle mechanic, he told Rowland to think about his long-term goals and what he wanted to do after he had left the Army as well.

“I told him being in the Army, one thing I regret is not changing my military occupation specialty,” Cox said. “At the end of the day, working on cars is fun and all, but working on humvees and military equipment, you get burnt out. Nineteen years in, I’ve burnt out working on cars, which was my passion.”

At the end of it all, Larsen said she is thankful that the Army got involved in her sons’ reunion.

“It was special,” Larsen said, her voice cracking with emotion. “I am so proud of both of them, they’re both so brave. And they are good men. They put the right things first. They deserved this.”