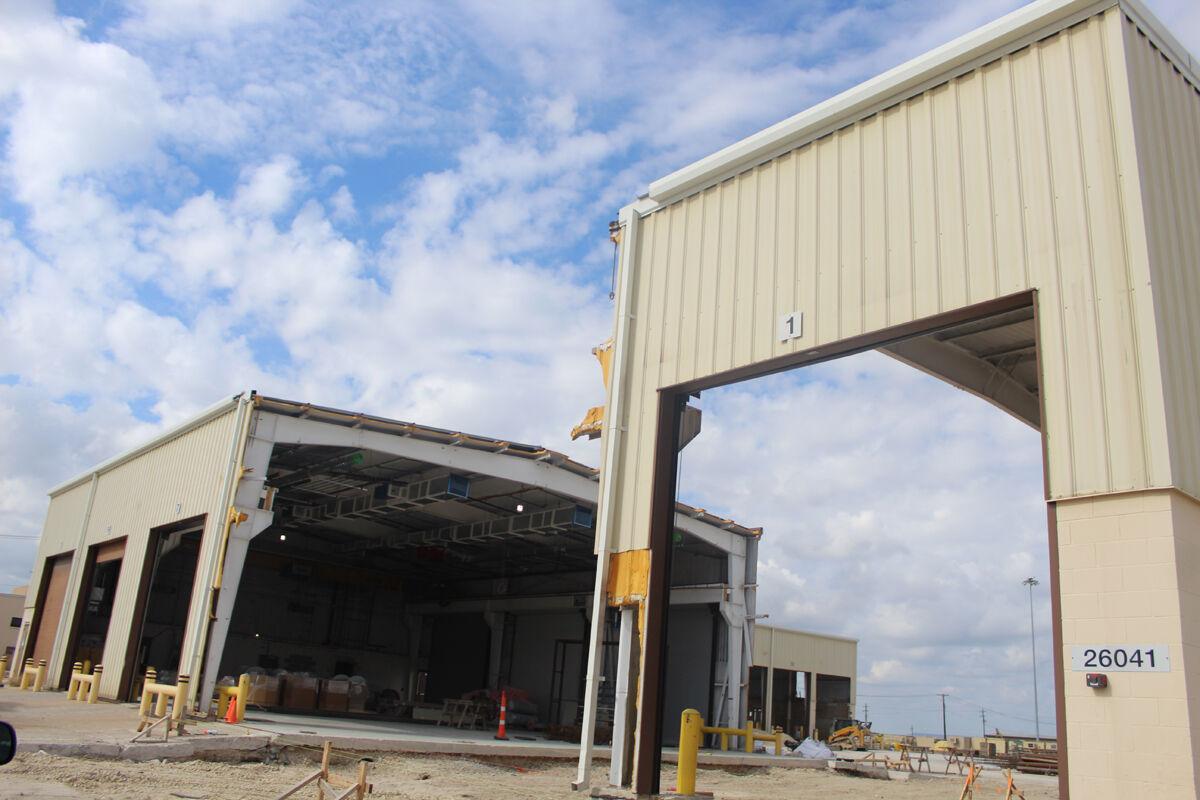 A 1st Cavalry Division motor pool has a section of the roof removed while crews are in the process of renovating it to bring it up to standards, so larger vehicles can be maintained. The renovation costs $10 million per motor pool. 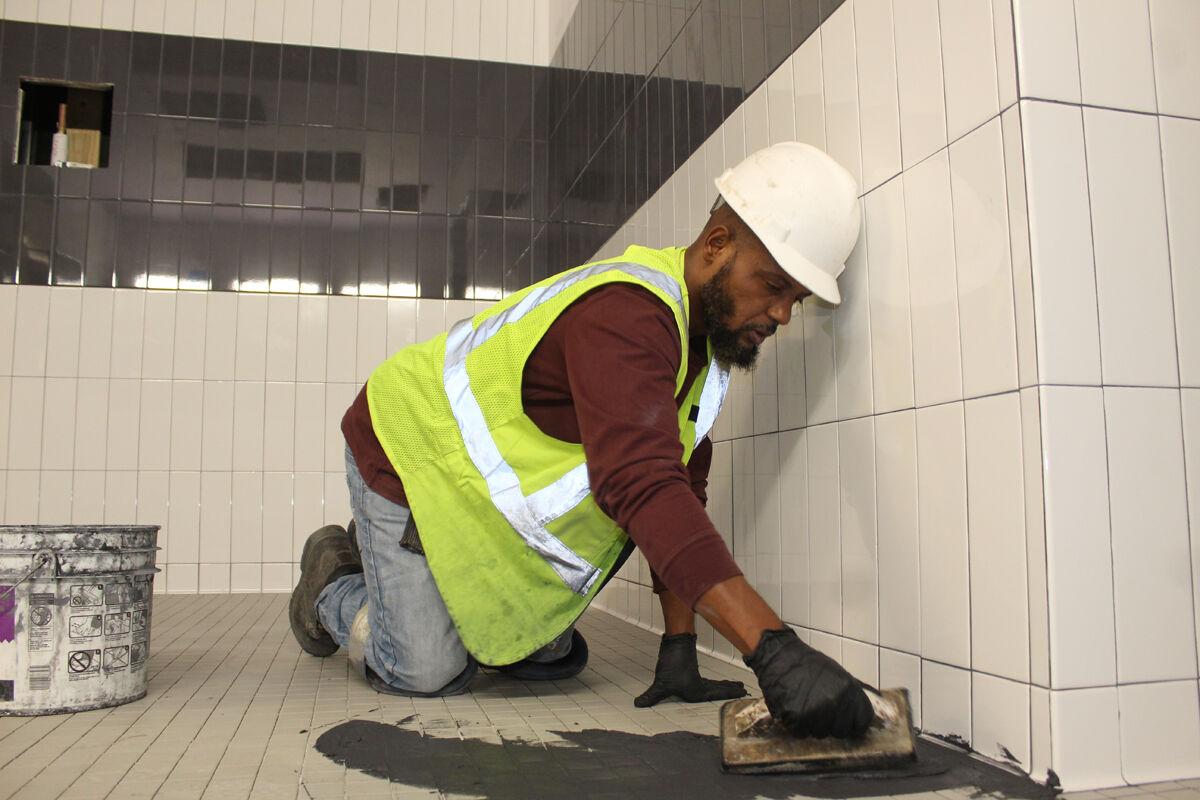 Jay Westley, a floor installer with Seneca Construction, adds grout to the floors inside the locker rooms at the future Warrior Way Fitness Center, formerly the Warrior Way Post Exchange. Phase 1 of the renovation will provide 30,000-square feet of gym floor, while Phase 2 will expand the facility to approximately 50,000-square feet of fitness space. 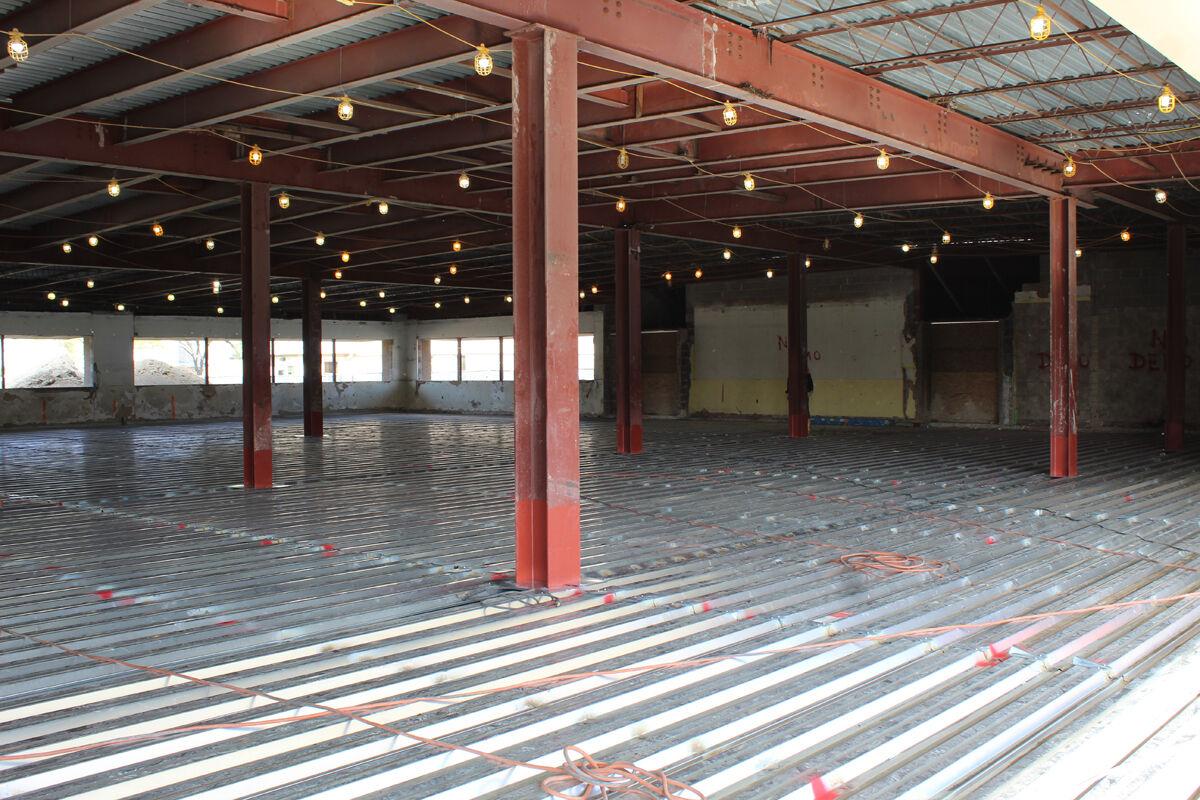 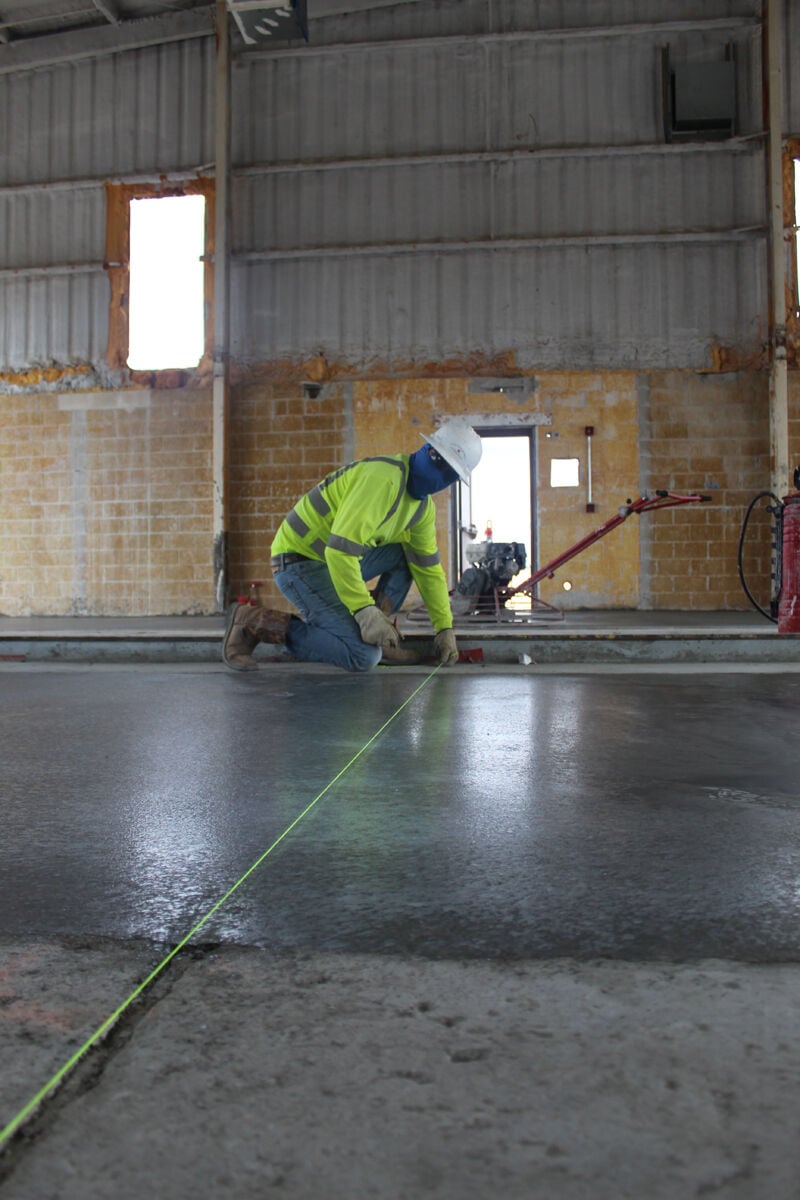 A 1st Cavalry Division motor pool has a section of the roof removed while crews are in the process of renovating it to bring it up to standards, so larger vehicles can be maintained. The renovation costs $10 million per motor pool.

Jay Westley, a floor installer with Seneca Construction, adds grout to the floors inside the locker rooms at the future Warrior Way Fitness Center, formerly the Warrior Way Post Exchange. Phase 1 of the renovation will provide 30,000-square feet of gym floor, while Phase 2 will expand the facility to approximately 50,000-square feet of fitness space.

Fort Hood’s Directorate of Public Works is giving old buildings a new lease on life as they update some outdated buildings and repurpose existing buildings to be used for drastically different purposes.

Brent Cabaniss, chief of DPW’s engineering division, explained that nearly half of motor pools at the Great Place were constructed in the 1950s and 1960s, a time when the military vehicles were much smaller than those used today. They lack overhead lift and their bays are too small for maintaining combat vehicles like tanks, Bradleys and Strykers.  These facilities are beyond their useful life and need to be demolished and replaced with modern motorpools like the one being constructed for 3rd Cavalry Regiment.

There are currently two 1980s motor pools under renovation at approximately $10 million each. Both motor pools are having pits built into the floor, adding cranes and even having the height of the building raised so larger military vehicles can fit properly.

The renovated motor pools will have the various fluids needed to operate a vehicle, i.e. oil, antifreeze, brake fluid, etc., pumped directly into the bay through hoses. When vehicle operators or mechanics need a fluid, it is easily assessable.

“We would love to build new, but that’s just not always feasible (monetarily) to do,” he said.

“Renovating a motor pool is great way to extend the life of the 1970s and 1980s era facilities that will be used at Fort Hood for many years to come,” Brian Dosa, DPW director, added.

DPW contractors are currently in the process of renovating the former Warrior Way Post Exchange, turning a section of it into the Warrior Way Fitness Center. Phase 1 of the fitness center renovation will provide 30,000-square feet of gym floor. According to Brandi Crist, community recreation chief with the Directorate of Family and Morale, Welfare & Recreation, Phase 2 will expand the facility to 50,000-square feet of fitness space, making it Fort Hood’s second-largest fitness center.

There are currently two contractors working inside the building. One is in the process of creating locker rooms, showers and a laundry room, while the other contractor is tearing out flooring and replacing it with rubber matting. After that is complete, power drops will be installed to power the fitness equipment. Crist said they are currently anticipating more than 140 pieces of fitness equipment installed during the renovation.

“This facility will provide both functional and physical fitness capabilities to the Fort Hood community, so that they can be physically ready and have a healthy outlet to mentally reset and recharge,” she added.

Building 87017 has been empty for several years, but will soon be the headquarters of the 3rd Security Forces Assistance Brigade.

“It has been sitting vacant for five years or more,” Cabaniss explained. “So again, another facility that we weren’t using and now we’re getting the use out of it.”

The former Eagles Nest Dining Facility, which sits in the 3rd Cavalry Regiment’s footprint, will provide the 3rd SFAB with approximately 14,000 square feet of space.

ESA South, Inc., the contractor for the renovation, discovered flooring problems early on, which required a complete demo of the existing floors. They are currently in the process of welding decking down and preparing it for concrete. This $8 million contract is expected to be completed in spring 2021.

Cabaniss said it is sometimes difficult to receive funding when repurposing old buildings and using them for a completely different purpose than the buildings original intent.

“When you go to headquarters and ask for money to turn an old PX into a gym, for whatever reason, that’s doesn’t always gain a lot of traction,” he added.

He explained that a great example of renovating something old into something new is the former hospital, which gained a new lease on life as the Shoemaker Center. By renovating the former hospital, DPW was able to consolidate several Soldier and family supporting organizations like Army Community Service into a single location, transitioning a dozen different locations and storage buildings into a single, more usable space. Other core services for families are also located inside the Shoemaker Center, named in honor of the late Gen. Robert M. Shoemaker, who served as Fort Hood and III Corps commander from March 1975 to November 1977.

Cabaniss said that the Shoemaker Center is approximately 90% full, but still has some capacity for moving additional organizations into available space, but that it will require some investment to make the necessary renovations.

“We have a large list of requirements at Fort Hood, so we can typically develop several good ideas to repurpose a facility,” Cabaniss concluded. “The challenge is finding a way to get the construction project funded, so that we can make that good idea a reality.”

Editor’s Note: This is the last of a three-part series the Fort Hood Sentinel wrote about the ongoing construction on Fort Hood. The other two stories can be found online at www.forthoodsentinel.com.