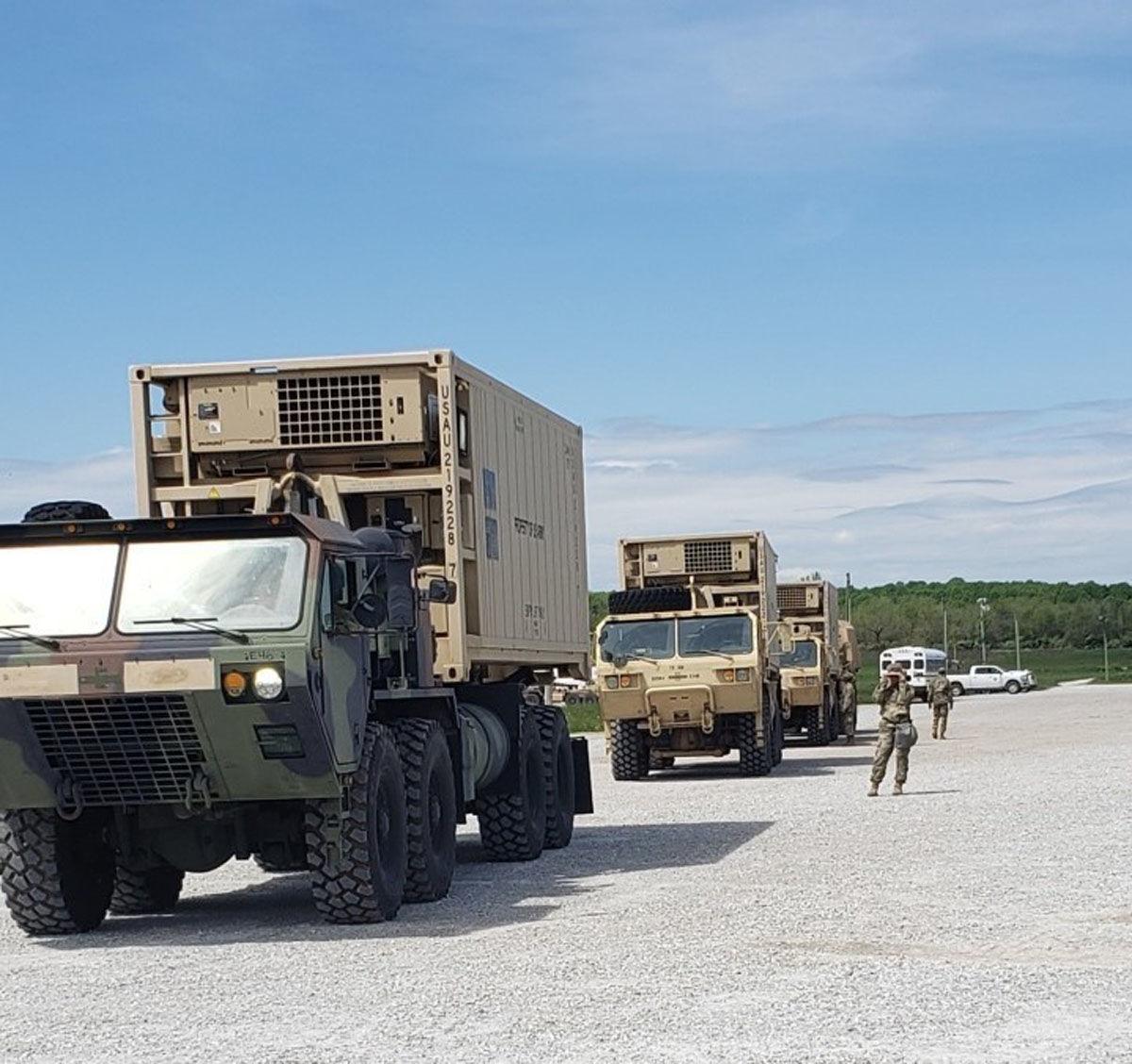 U.S Army Reserve Soldiers with the 79th QM Co. line up their convoy and prepare distribute food and water during Operation Guardian Response at Camp Atterbury, Indiana, May 7, 2019. Guardian Response is a field training exercise that validates Army units’ ability to support Defense Support of Civil Authorities in the event of chemical, biological, radiological and nuclear catastrophe. 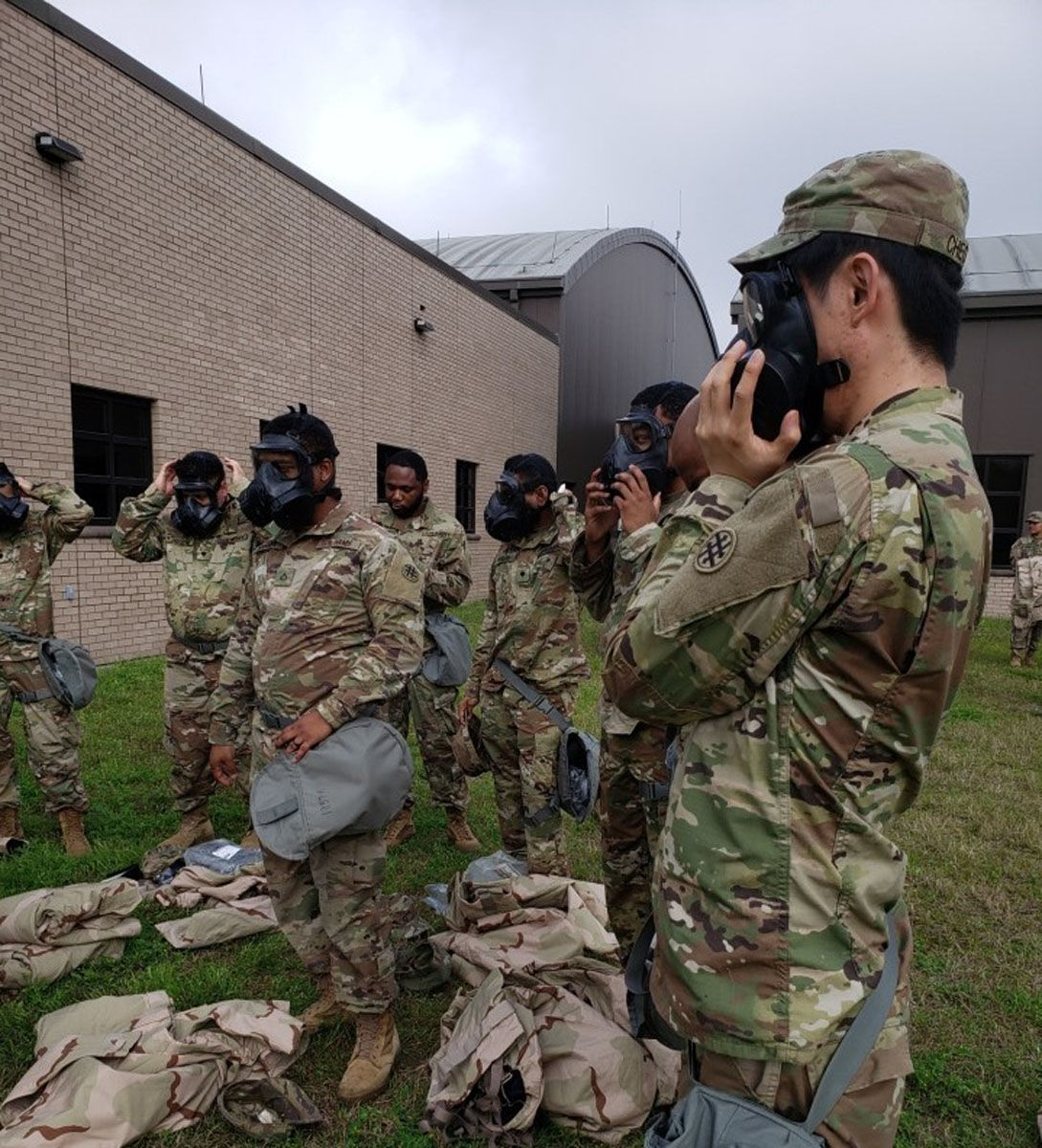 U.S Army Reserve Soldiers with the 79th QM Co. line up their convoy and prepare distribute food and water during Operation Guardian Response at Camp Atterbury, Indiana, May 7, 2019. Guardian Response is a field training exercise that validates Army units’ ability to support Defense Support of Civil Authorities in the event of chemical, biological, radiological and nuclear catastrophe.

Leaders in the U.S. Army Reserve’s 79th Quartermaster Company out processed through the Fort Hood Deployment Readiness Center May 27 after their unit concluded a two-year mobilization to Houston.

The 79th QM Co. was tasked with a contingency mission to respond to any location in the U.S. in case of a natural disaster or biological threat within 72 hours. To prepare for their mission, they had to train up on several tasks such as convoy operations, chemical, biological, radiological, nuclear and explosives, and basic warrior skills.

“We focused mostly on training for the mission and being prepared,” 1st Sgt. Adelaido Solis, a native of Houston, said. “In light of our mission being in a 72-hour window, we had to always be ready.”

While the more experienced members of the unit were able to train many of their junior Soldiers, some skills required specialized schooling.

“We sent Soldiers to schools so they could move the unit from home station to anywhere in the U.S.,” Capt. Jeremy Santos, company commander for the 79th QM Co., said. “We had to come together as a team and work with surrounding units and facilities.”

The 79th QM Co. is part of the 211th Regional Support Group and the 4th Expediationary Sustainment Command. The 4th ESC is made up of Soldiers, civilians and their families in units headquartered throughout Texas, New Mexico, Arkansas, Oklahoma and Louisiana. These units are trained  and equipped to provide military and logistical support in any corner of the globe.

Maintaining readiness for an Army Reserve unit brings challenges with the limited time they have for training. Generally, they only have one weekend a month and two weeks a year to get all required training complete. To further complicate things, some Army Reserve Soldiers start attending their weekend battle assemblies while waiting to go to basic training.

“Just to put it in perspective, when you get a new Soldier that’s available, it’s not just now they are here and ready to go,” 1st Lt. Rodolfo Rodriguez, the operations officer in charge, said. “Being a Reserve unit, we had Soldiers coming in and out, but who are unavailable as they need to go basic training yet.”

Rodriguez joined the unit in late 2016, having just completed his Basic Officer Leadership Course. As the operations officer, he oversaw the planning for required training necessary to keep the 79th in a position to respond to any mission.

“We only have that one weekend a month to make sure they are catching up on their (Federal Emergency Management Agency) courses, their CBRNE training, as well as their driver’s training, night vision training and basic warrior tasks at one field training exercise, one weekend a month and still maintain readiness in a year-and a half or two years,” Rodriguez said.

While skills training is essential to a unit’s preparedness, there are other factors to consider. Leaders must ensure their Soldiers personnel files are prepared as well.

“One of the things I always stressed is being ready to deploy, and that means being administratively ready,” Solis said. “It also required being medically ready, and one of our proudest things that we can claim is we exceeded U.S. Army Reserve Command standards for medical readiness. We were usually first or second place in the battalion when it came to medical readiness.”

With the administrative needs taken care of, the leadership of the 79th QM Co. set up rigorous training to test their Soldiers on a variety of skills.

“In my opinion, you have to be trained to go do what someone tells you, and that can be anything from driving a forklift to saving your buddy’s life,” Solis said.

Ensuring the readiness of military personnel is only half of the equation. Army Reserve units rely on their equipment and vehicles to carry out missions ranging from combat operations overseas to defense support of civil authorities  when assisting with disaster relief efforts here in the United States.

Maintaining a fleet of vehicles and other critical equipment is no easy task and can require additional support to meet mission requirements.

“We needed a lot of our vehicles to be up and running and fully mission capable,” Capt. Shundrika Jones, the 79th QM Co. executive officer, and native of Prattville, Alabama, said. “A lot of that was taken over by the Army Maintenance Support Activity control before we came on mission. They would do 80% of our work orders to fix our equipment. We were able to fix up an abundance of our equipment to get our readiness rate up to 88.6%, which was important because part of the mission was being able to move equipment and personnel.”

As the Soldiers and vehicles were prepared for any mission the Army would assign them, something new and unexpected came over the horizon.

When COVID-19 started to flare up in the U.S., Soldiers in the 79th QM Co. could have had an opportunity to conduct missions and help their fellow Americans.

“There were a lot of Soldiers calling the unit saying they were ready to come in, ready to go,” Santos said. “It made us relook at everything we had and get ready to activate our alert roster and be prepared to leave in 72 hours.”

Although fully prepared and willing, the order to mobilize and fight COVID-19 never came. The 79th QM Co.’s mobilization orders were coming to an end, and they began looking at what was next for each of them.

Santos will change out of command in July and move on to his unit’s higher headquarters, the 4th Sustainment Command (Expeditionary), based in San Antonio, Texas, and his Soldiers are volunteering for new assignments and opportunities to progress in their Army Reserve Career.

Jones and Rodriguez are both taking command of units in the coming months. Solis will stay on with the 79th QM Co. and start the training cycle all over again.

“Although we will no longer be on mission,” Solis said, “we still want to remain ready for any kind of deployment or emergency that could happen stateside or around the world.”