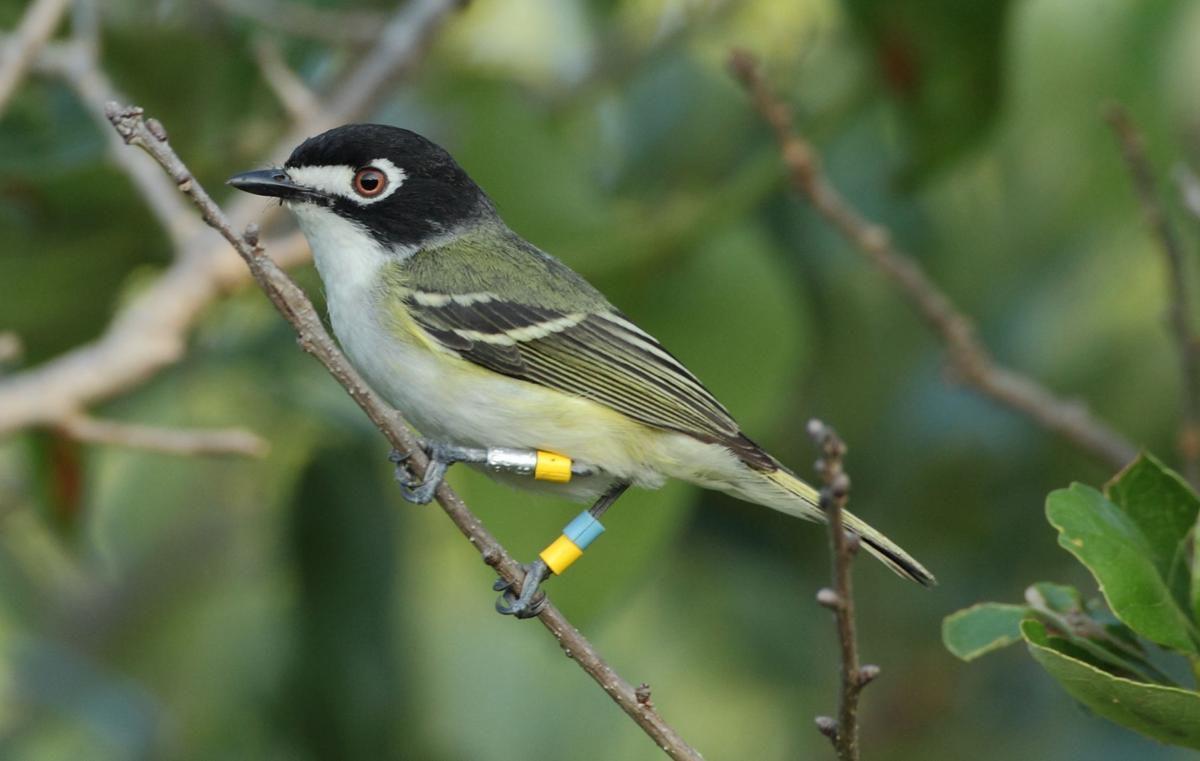 The black-capped vireo, which was on the brink of extinction in the late 1980s, has been delisted from the endangered species list. 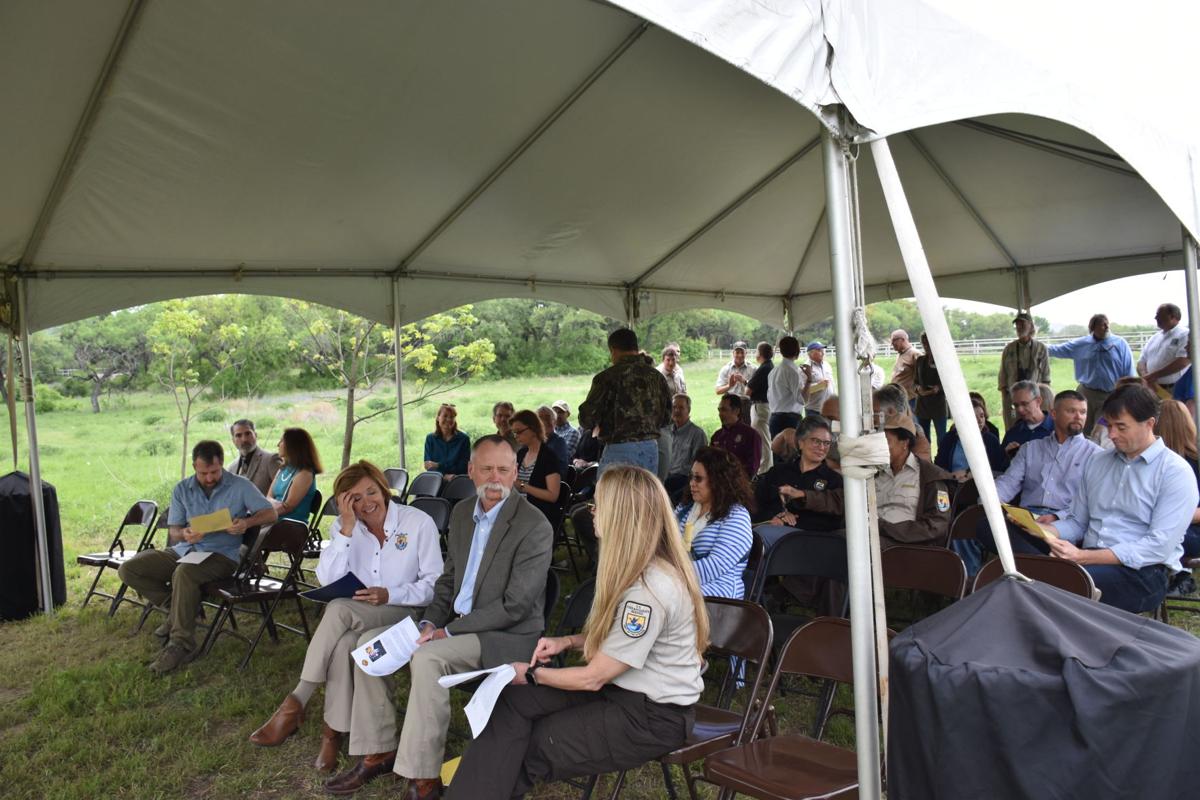 Officials from USFWS and state wildlife officials join Fort Hood representatives for a ceremony to mark the recovery of the black-capped vireo and celebrate conservation partnerships Friday. 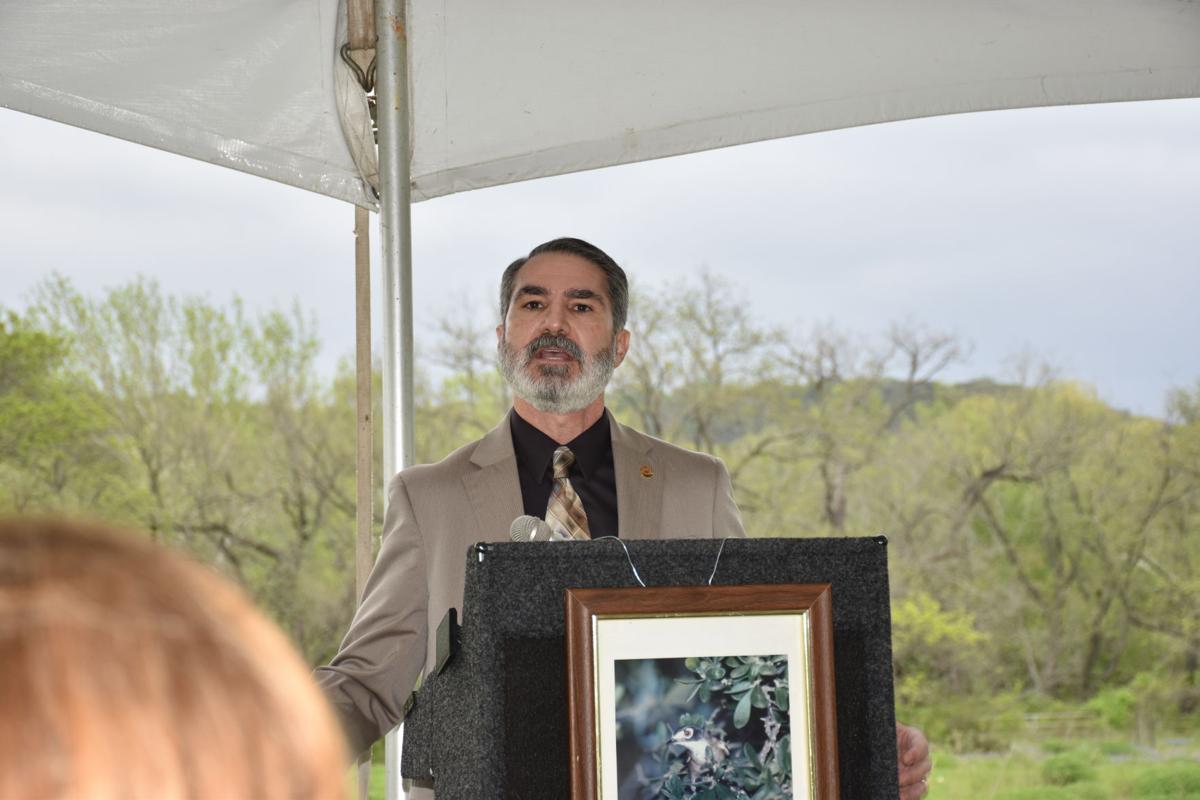 The black-capped vireo, which was on the brink of extinction in the late 1980s, has been delisted from the endangered species list.

Officials from USFWS and state wildlife officials join Fort Hood representatives for a ceremony to mark the recovery of the black-capped vireo and celebrate conservation partnerships Friday.

MARBLE FALLS — Fort Hood and its conservation partners celebrated the resurgence of a small songbird that nests and breeds in the shrub lands of the post’s training areas during a ceremony to mark the black-capped vireo’s removal from the list of endangered and threatened species.

On the brink of extinction in the late 1980s, the black-capped vireo has seen a resurgence from robust conservation efforts led by the U.S. Fish and Wildlife Service, which included Fort Hood. Through the conservation efforts undertaken by these partners to address primary threats, conserve needed habitat and advance scientific understanding, the vireo has experienced a dramatic recovery. There are now more than 14,000 birds estimated across the vireo’s breeding range of Oklahoma, Texas and Mexico.

“I’m proud of our Natural Resources team for their application of sound science to demonstrate military training is compatible with the black capped vireo recovery. I also appreciate the efforts of the U.S. Fish and Wildlife Service to fully understand our training and readiness requirements, striking a balance between Fort Hood’s mission and endangered species management,” Col. Hank Perry, commander, U.S. Army Garrison-Fort Hood, said. “This delisting results from decades of collaboration between the Fish and Wildlife Service and stakeholders like Fort Hood.”

The USFWS celebrated the partnership-driven recovery of the black-capped vireo at Balcones Canyonlands National Wildlife Refuge with many of those involved in the recovery effort on Friday.

“The delisting of the black-capped vireo clearly illustrates the value of the Service’s partnership-driven approach to conservation,” said Amy Lueders, the Service’s Southwest Regional Director. “By working with our partners, including Fort Hood, Fort Sill, the states of Texas and Oklahoma, private landowners and others we were able to conserve a North American songbird that once perched on the brink of extinction for future generations to enjoy.”

Officials said the recovery was a success that illustrated the importance of collaborative efforts.

“Anytime we are able to successfully recover an imperiled species and see it removed from the endangered species list is cause for celebration,” Carter Smith, executive director of Texas Parks and Wildlife Department, said. “What made it all work were the tireless efforts and dedication of multiple public and private partners, particularly the commitment of private landowners who labored diligently to restore and enhance habitats to benefit the vireos and a host of other native species in the process. The conservation lesson learned here is that marriage of good partnerships and good land stewardship produces results we can all be proud of.”

The black-capped vireo was listed in 1987 primarily due to the impacts of habitat loss and nest parasitism by brown-headed cowbirds. Cowbirds dupe the vireos into raising cowbird chicks at the cost of the survival of their own young.

Across Texas and Oklahoma, the USFWS worked with the U.S. Army, Oklahoma Department of Wildlife Conservation, Texas Parks and Wildlife Department, U.S. Department of Agriculture, The Nature Conservancy, the Environmental Defense Fund and others on efforts to recover the black-capped vireo. A concerted program to manage cowbirds and restore habitat resulted in increased numbers of vireos across the breeding range. Conservation efforts included using prescribed fire, creating conservation easements and research and management of brown-headed cowbirds.

The black-capped vireo is the smallest member of the vireo family, occurring regularly in the United States. It winters exclusively in Mexico along the Pacific Coast. Sporting a namesake black cap and white face mask, black-capped vireos build intricate hanging-cup nests two to four feet above the ground fastened to the branches of shrubs with strands from spider webs. They return to the same breeding site year after year.

Using a scientifically rigorous Species Status Assessment, the USFWS found that the primary threats to the black-capped vireo have been reduced or adequately managed and populations are expected to be viable in the future.

To ensure black-capped vireo populations remain healthy and stable into the future, the USFWS has developed a post delisting monitoring plan with the states of Texas and Oklahoma, Fort Hood, Fort Sill and The Nature Conservancy of Texas. The plan describes the methods that will be useed to monitor the status of the vireo and its habitat, in cooperation with partners for a 12-year period and provides a strategy for identifying and responding to any future population declines or habitat loss.

At Fort Hood, that partnership includes balancing good environmental stewardship with the needs of the Army.

Along with continued monitoring of the vireo population on the installation, conservation efforts continue in the recovery of Fort Hood’s other endangered songbird species, the golden-cheeked warbler; while keeping the lands open for training.

Prior to 2015, training restrictions were in-place on the installation to protect the endangered songbirds. Though those restrictions were lessened thanks to the conservation efforts over the years, they were not completely lifted until a few years ago.

“The golden-cheeked warbler is still considered an endangered species and is listed as such,” Timi Dutchuk, chief of Environmental Programs, Fort Hood DPW-Environmental, said. “The golden-cheeked warbler was listed in 1990 with our first Biological Opinion from and with USFWS imposing training restrictions on 36 percent of our training lands. Through collaboration and application of sound science demonstrating compatible goals between training and endangered species recovery, our most recent 2015 Biological Opinion imposes zero percent military training restrictions.”

Keith Gogas, deputy to the Fort Hood garrison commander, understands that balance of training while conserving and protecting natural resources. “I was on the other side of this,” Gogas, a former maneuver commander, said. “My whole focus in life was training Soldiers and readiness and I wasn’t really worried about the environment.”

After he retired, Gogas became Fort Hood’s training division chief and began working alongside Natural Resources, where he worked collaboratively to find ways to protect the endangered birds while also allowing Soldiers to train on the lands where the birds lived.

He takes pride in the efforts at Fort Hood and the partnership.

“I can’t tell you how proud it makes me as a former Soldier and now as a deputy garrison commander to know that this partnership has worked so well,” Gogas said. “We’re not done yet, there is a lot of work left to do.”

Soldiers will continue to train at Fort Hood, but the need to maintain good stewardship of natural resources is vital, not only to the wildlife on the training lands, but to the military training as well.

“As long as we keep those lands viable, we can continue to train on those lands into the future and keep taking care of Soldiers and their Families,” Gogas said.

This delisting results from decades of collaboration between the Fish and Wildlife Service and stakeholders like Fort Hood.