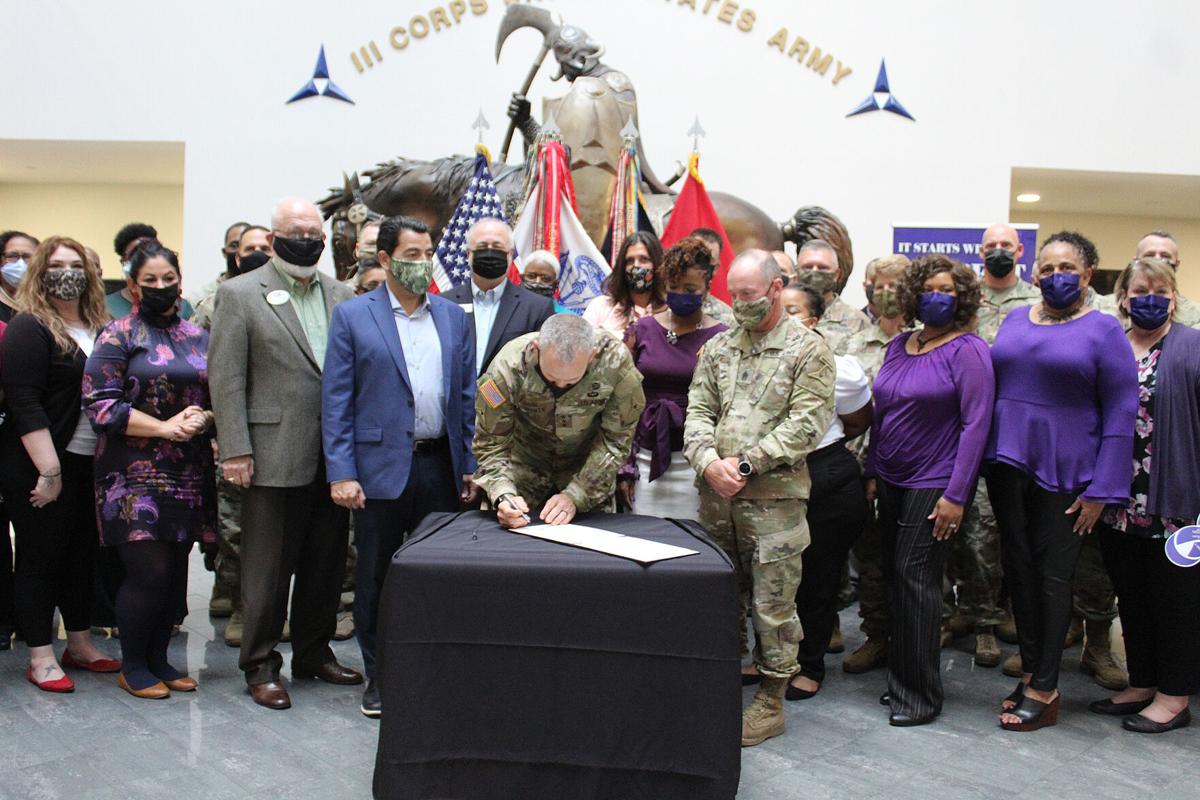 Surrounded by members of the community, Lt. Gen. Pat White, III Corps and Fort Hood commanding general, signs the 2021 Domestic Violence Awareness proclamation in the West Atrium of III Corps Headquarters Sept. 30. The commander invited the audience to stand up and sign with him. 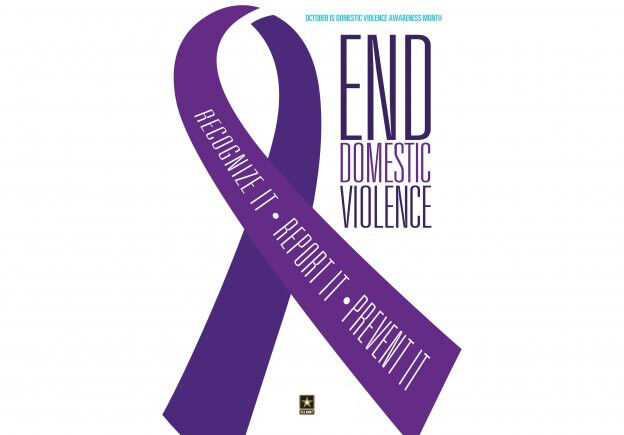 Surrounded by members of the community, Lt. Gen. Pat White, III Corps and Fort Hood commanding general, signs the 2021 Domestic Violence Awareness proclamation in the West Atrium of III Corps Headquarters Sept. 30. The commander invited the audience to stand up and sign with him.

Twenty four people are either physically abused, raped or stalked every minute of every day, totaling 12,614,400 victims of domestic abuse annually, a crisis that domestic violence programs want to bring attention to for education and prevention.

The Fort Hood Family Advocacy Program office hosted the 2021 Domestic Violence Awareness Proclamation signing in the West Atrium of III Corps Headquarters, Sept. 30, with dozens of Soldiers and community leaders there in support of raising awareness and bringing attention to the problem.

“A crisis does not define who we are – as a community, as an installation, as Soldiers – it’s how we respond to a crisis that defines us,” Col. Chad R. Foster, U.S. Army Garrison – Fort Hood commander, said during the ceremony. “People First is not a bumper sticker. People First is a commitment and part of that is the commitment to do everything we can to prevent the scourge of domestic violence.”

Before signing the proclamation, Lt. Gen. Pat White, III Corps and Fort Hood commanding general, invited the crowd to stand with him to put an end to domestic violence.

“You’re signing up for this proclamation if you’re sitting in this room,” he said.

Fort Hood’s FAP office offers classes and workshops that focus on the areas they believe may help people learn how to handle the stressors of life.

The Gabby Petito case, which has gained nationwide interest, showed the nation that domestic abuse is sometimes hidden behind a smiling face. Abuse may not be  noticed until it is too late, which is why Russell said it is vitally important for victims to seek help before reaching that point.

If domestic abuse is suspected, the best thing to do is to file a confidential report using the Care Line 254-287-CARE (2273). Russell said the first thing they do when they receive a call about a domestic disturbance is to call the military police, who will separate the couple for a minimum of seven days.

During that period, both parties will be interviewed and the victim will be offered services on and off post, including a domestic violence shelter. She said it is important to note that while it is generally believed that the man is always the aggressor, that is not always the case.

“Poor frustration tolerance, poor anger management skills, poor behavior is not gender specific. Women can also lash out in anger,” she said. “Men and women can be physically violent or verbally violent or emotionally abusive toward one another.”

Rhonda Shabazz, Victim Advocacy Program manager, assured the audience that COVID-19 has not impacted the services at Fort Hood, as they remain committed to delivering services to the Soldiers, families and community.

In partnership with 13th Expeditionary Sustainment Command, they will have a Domestic Violence Awareness Walk from 9-11 a.m., Oct. 13, at Sadowski Parade Field.

To bring awareness to the 12 million victims of domestic violence, they will be also hosting a Purple-Up Challenge throughout the month, with a goal of reaching 12 million steps. Participants can call 254-287-3593 or 254-388-3341 to give their step count to the Victim Advocacy Program.