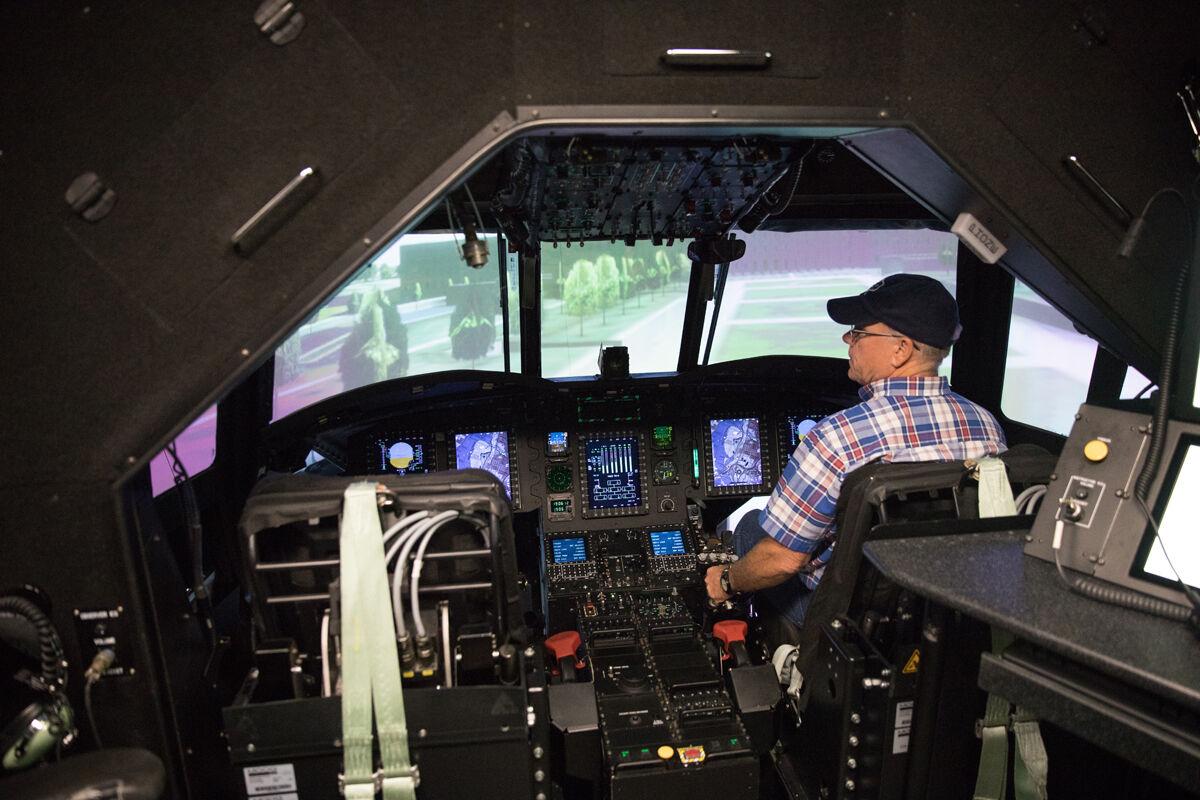 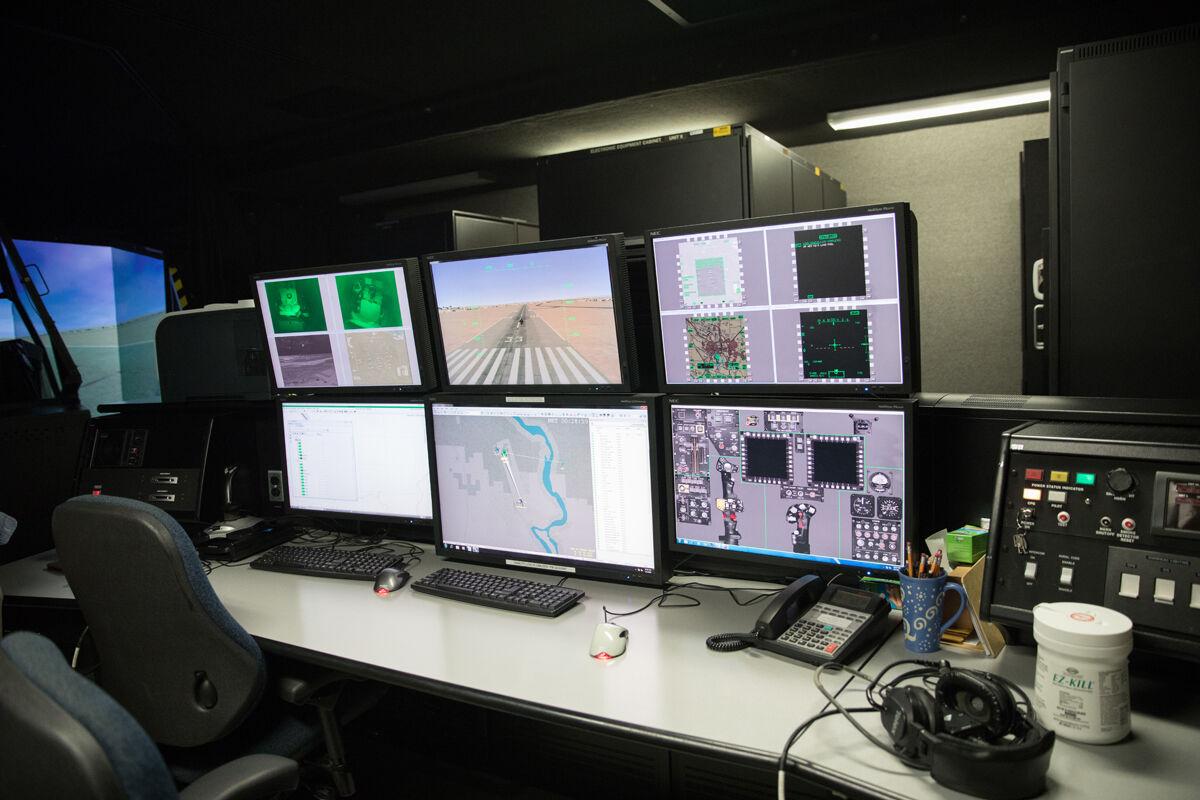 The Longbow Crew Trainer simulator has a computer set up that controls external elements of the flight. Though its graphics are not like the CH-47 simulator it focuses more on the weapons system. 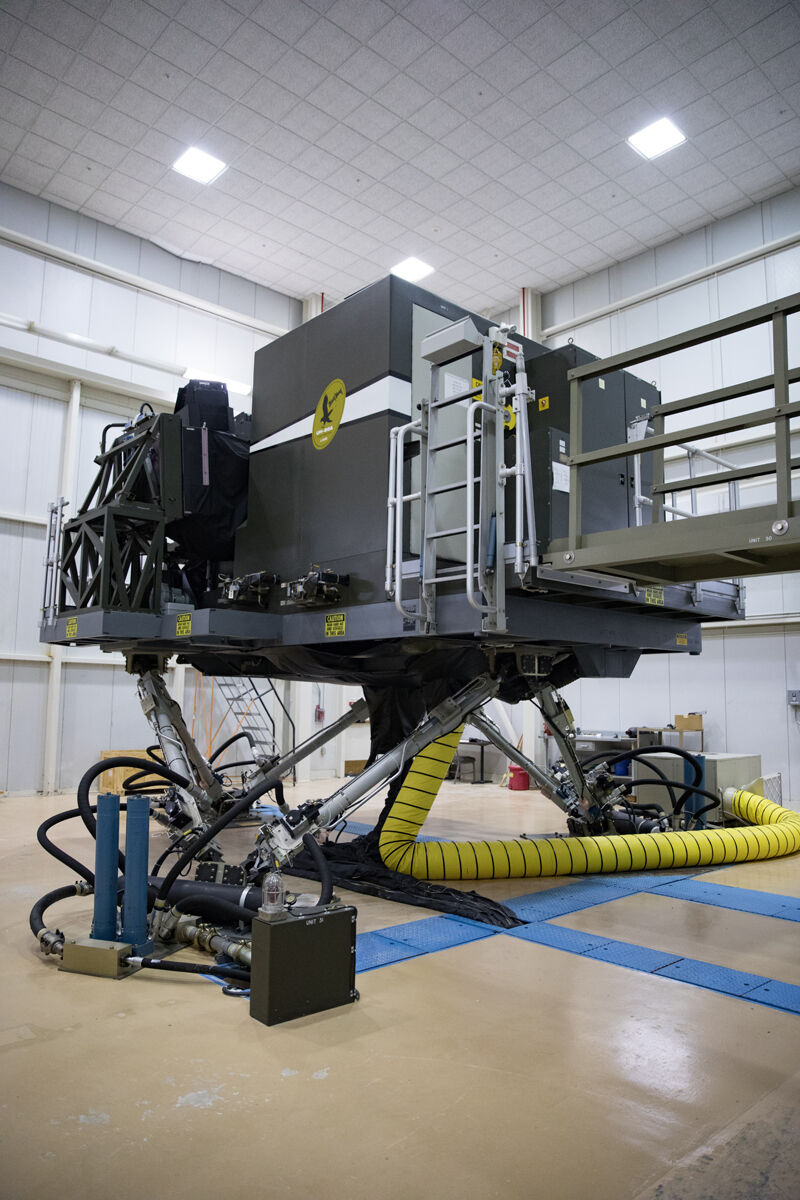 The outside of the full motion UH-60 (L) Black Hawk is set up to allow the entire structure to move in accordance to whatever the pilots do inside of the simulator.

The Longbow Crew Trainer simulator has a computer set up that controls external elements of the flight. Though its graphics are not like the CH-47 simulator it focuses more on the weapons system.

The outside of the full motion UH-60 (L) Black Hawk is set up to allow the entire structure to move in accordance to whatever the pilots do inside of the simulator.

There’s a lot going on at Hood Army Airfield, where pilots can have their head in the clouds while keeping their feet on the ground.

Out at Hood Army Airfield, there are several different flight simulators for different helicopters.

Fort Hood’s Flight Simulation Division routinely logs the highest utilization rates among Army installations. They stay busy, with pilots being required to meet a certain amount of flight simulation hours annually. Flight simulation also supports a robust foreign military service program. There can be up to five training periods per day with the Black Hawk simulators being used the most. Being able to spend time training in the simulators, instead of physically being in the air, saves a large amount of money, but just because they’re on the ground doesn’t mean that it won’t feel like the real thing.

All flight simulator devices utilize world-wide data base(s) that can put you anywhere in the world, allowing pilots to work in a realistic environment.

“It’s a very realistic (experience). When you’re sitting in the CH-47, for instance, you’re in total immersion of flight. You’re going to walk out with sensations of actual flight,” Csizmesia said. “In the CH-47, researchers put most of their developmental dollars into visual replication. The Longbow Crew Trainer is an attack helicopter so they put more of the money into duplicating the weapons system. So, when you pull the trigger on a 30-millimeter cannon, you get the recoil and associated aircraft reactions”.

During his tenure of working at Fort Hood, Csizmesia has seen dramatic improvements in the flight simulation technology.

“The imagery on the (CH-47), developed by Aechelon Technologies out of San Francisco, is computer generated high fidelity resolution. All the components that make up that cockpit are authentic aircraft parts. Theoretically you could swap out parts from the simulator and put it in a Chinook and they would be compatible in the aircraft.” Csizmesia stated, adding that simulators are so realistic, it feels like really flying. “In the old days it was more of a greyed-out screen and you were relying on basic instrumentation to guide your flying. Now it’s 3D visual, full immersion, full motion.”

That technology allows them not only to save money, but create different scenarios for the pilots based on their skill level and train them for emergency situations without putting them in danger. From engine failure to bad weather conditions to enemy fire you can experience it all in the simulators.

“We work with standardization pilots from 1st ACB (Air Cavalry Brigade) and other tenant units to help them develop their training scenarios … based on the individual pilot’s skill level you start at a baseline and help build their competencies and experience.”

COVID-19 didn’t slow training down. They were deemed mission essential and they made adjustments to allow for safety.

“There was discussion at higher levels whether or not we would have personnel in here to train. 1st Cav. was adamant that they would continue to train during the coronavirus … we are here to provide training.”

The most challenging thing for the hard-working staff of the flight simulators is keeping Fort Hood pilots on their toes.

“The pilots of 1st Air Cavalry Brigade and all aviators of III Corps have a diverse mission. The challenge is to continue to provide best training possible, and demand the pilots be ‘Above the Best,’”