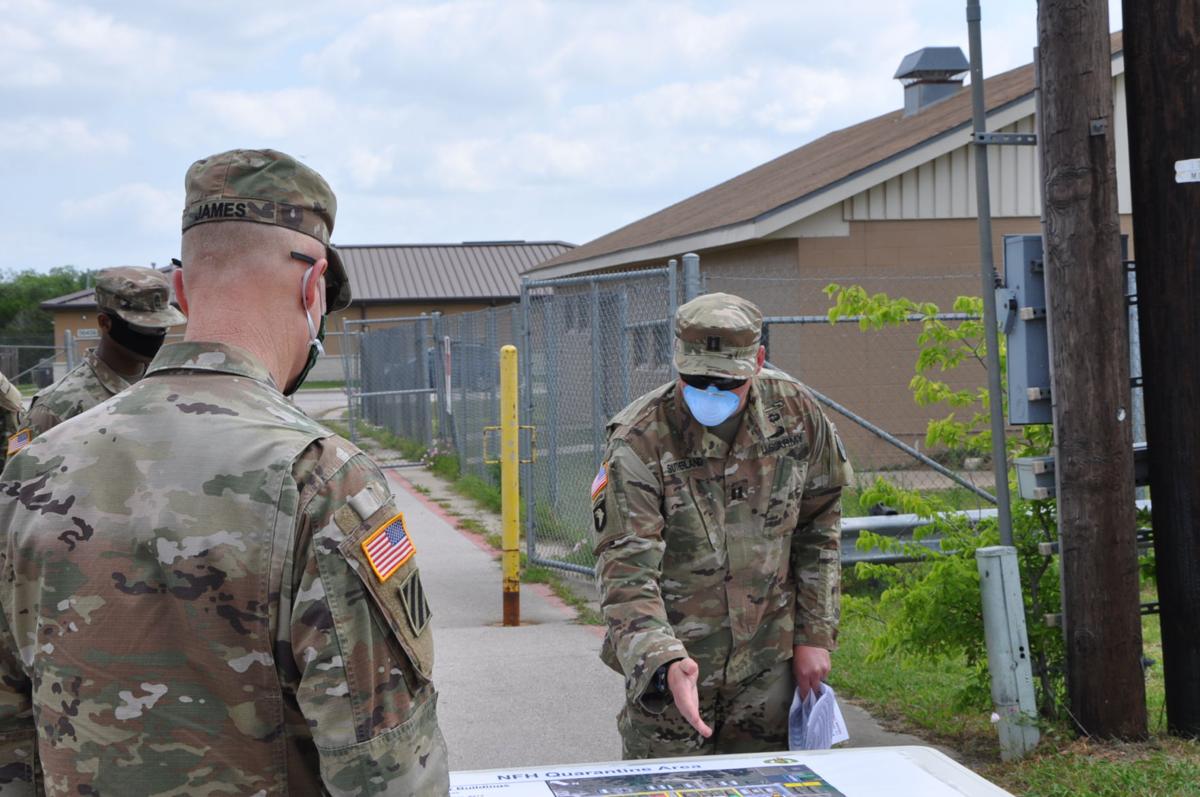 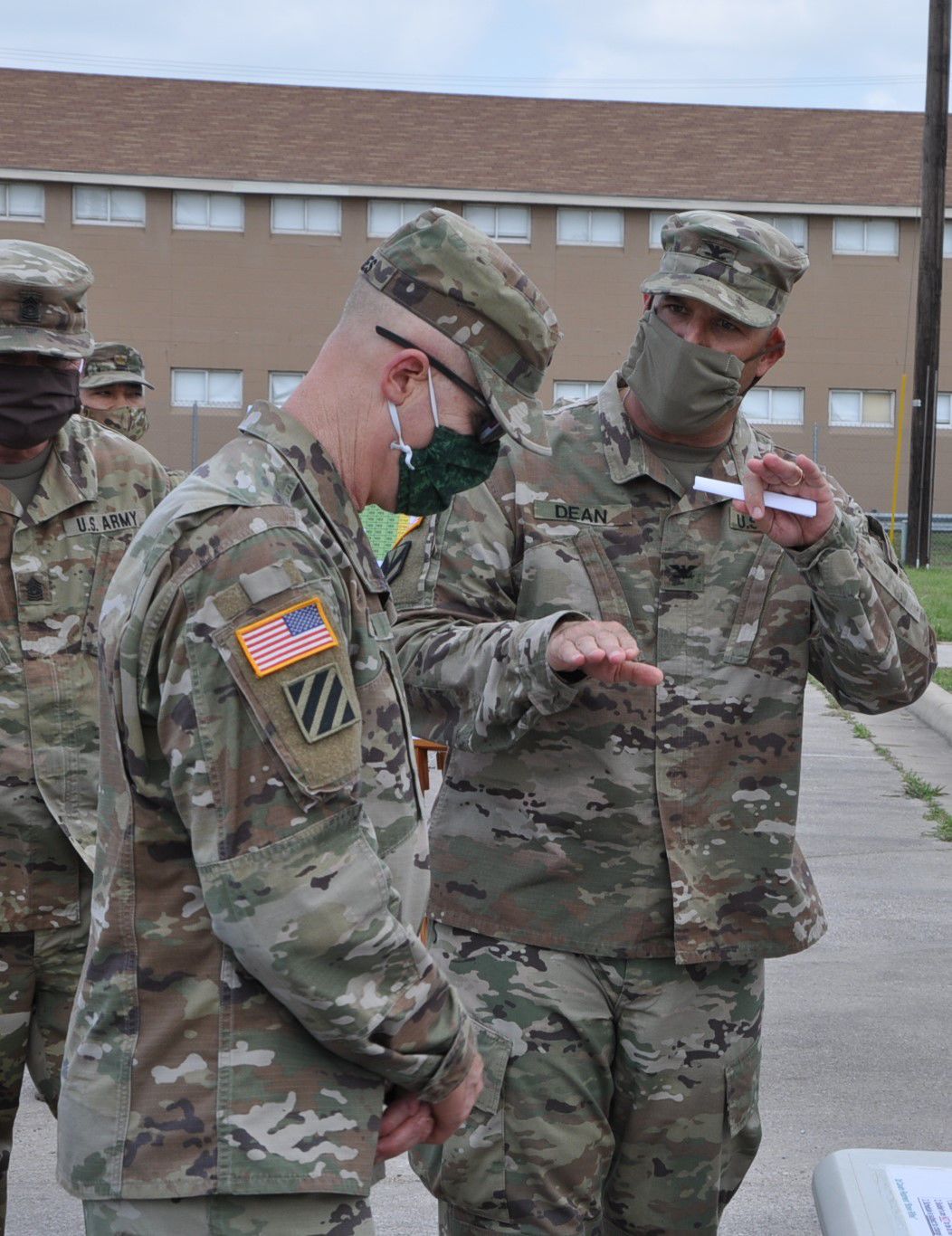 Currently, more than 500 Soldiers are in the quarantine holding area waiting to deploy overseas or return home after finishing tours of duty abroad. Leaders from the 120th Infantry Brigade, Hood Mobilization Brigade, and 2nd Squadron, 3d Cavalry Regiment were on hand to brief the generals how the quarantine operations preserve the health and readiness of the force in the face of a global pandemic.

“Safety is the most important factor here,” Col. Dave Dean, commander of the 211th Regional Support Group and Hood Mob. Bde., said. “We want to protect them from each other while they are here, but at the same time, we need to protect the force that’s overseas, or wherever they are going, and we want to protect the host nation citizens that we work and partner with every day. We want to make sure the Soldiers are safe, that their families are safe and that the community is safe.”

Looking out for the safety of Soldiers, families and community is a critical factor Tate focused on.

“We do quarantine operations out of an extreme level of caution,” Tate said. “To protect not only the force, but also to protect our communities, both here at Fort Hood and Fort Bliss, but also the surrounding communities.”

Tate is no stranger to quarantine operations. He was in quarantine for 21 days during the Ebola crisis in 2014 and knows what the current batch of Soldiers in quarantine are facing. He made it a priority to ensure their conditions were comfortable and facilitated contact with family and friends back home.

“I had some pretty good ideas of what I thought would be necessary to take care of the Soldiers with dignity and respect,” Tate said. “And also allow them to work out, work on fitness, have internet access, get some work done and communicate with their families.”

“Lt. Col. Escobar’s group has done an outstanding job here, and we really appreciate his efforts in taking care of the Soldiers and how he developed relationships with all the other entities on post,” Dean said. “They all have the central focus and message, that we’re here for the Soldiers to take care of them. He and his team have done a great job of that.”

Escobar’s squadron was tasked by the Fort Hood commanding general to provide life support for 14-day quarantine for units mobilizing and demobilizing. Saber Squadron initially had to determine what services were needed and quickly established a system for feedback from the quarantined units.

“We are not in the business of telling anybody no,” Escobar said. “We are in the business of receiving feedback and working with our partners across the installation to figure out how we provide the best living conditions possible.”

For the Saber troopers to take care of fellow Soldiers, especially those deploying overseas, they had to take several protective health measures.

“First and foremost, we are emphasizing personal protective equipment or PPE,” Lt. Col. Greg Escobar, commander of 2nd Sqdn., 3rd Cav. Regt., said. “This includes a set of gloves, eye protection and medical face mask that we issue out to each trooper.”

Escobar’s troops wear this PPE while providing daily routines for the quarantined Soldiers by escorting them to laundry facilities, a running track, internet café or even a snack shop set aside exclusively for them, all while maintaining social distancing.

While providing quality of life activities is important for Escobar and his troops, they also focus on the health of their quarantined comrades.

“The second piece that we do to protect the troopers is conducting medical screenings twice a day checking for COVID-19 symptoms,” Escobar said.

If a Soldier shows symptoms and tests positive, they are pulled from the population and put into isolation to reduce the chance of infection among the 3rd Cav. troopers and other quarantined Soldiers.

“It is important to note that not one single Soldier mobilizing or demobilizing through Fort Hood has tested positive or turned out to be positive with COVID-19,” Tate said.

With the current health of the quarantined Soldiers well in hand, Tate praised the partner units working to efficiently process the quarantined units as they mobilize and demobilize in support of the Army’s worldwide deployable mission.

“I think that the quarantine operations are being run extraordinarily well,” Tate said. “Between the 120th, the Hood Mob. Brigade and 2nd Squadron, it has come together to be a great cooperative team. I’m particularly proud of Lt. Col. Escobar and his team and what they have been able to do to take it from the bare minimum level to where it is now, which is where it needs to be.”

The significance of the mission is not lost on Escobar, and he emphasized it to his troopers.

“I tell my guys that the world is only trying to solve one problem, and that’s COVID-19,” Escobar said. “Because of that, we have the unique opportunity to represent the U.S. Army and do our small part to help solve that through the quarantine here.”