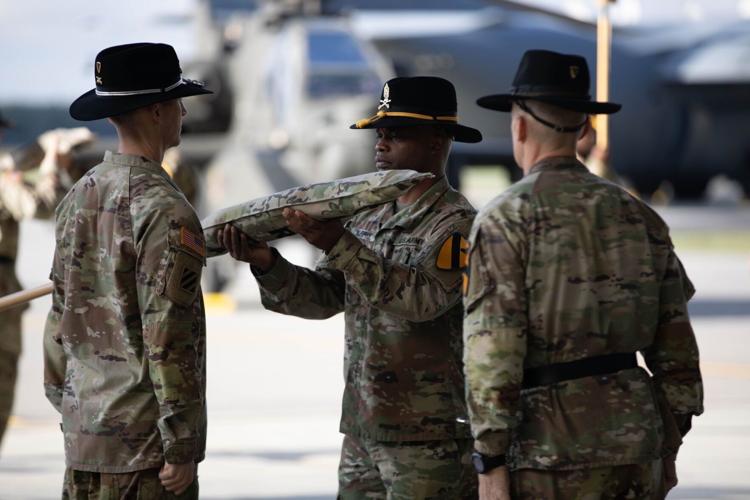 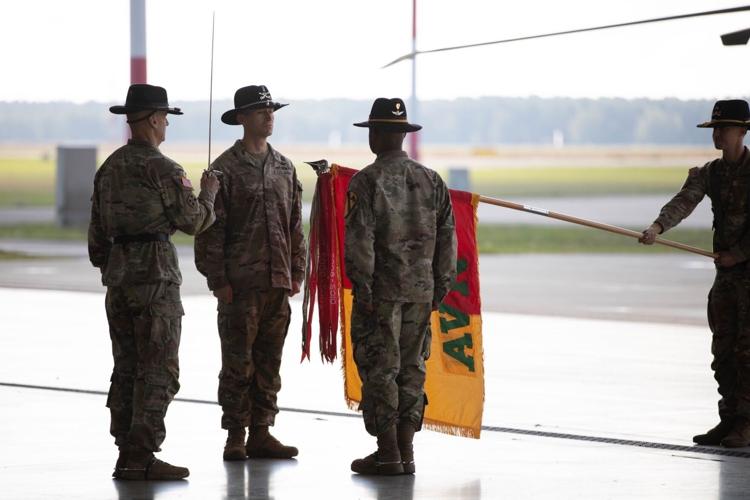 This is the first time the rotational aviation headquarters will operate out of Poland, instead of Germany, in a move with strategic implications for NATO’s eastern flank.

“We are here because we volunteered,” Maj. Gen. John Meyer III, 1st Infantry Division commanding general, said as he addressed the formations from both units. “Each and every one of us raised our right hand and took an oath to support and defend the constitution of the United States against all enemies, foreign and domestic. Our country needed us to deploy to Eastern Europe to defend freedom, to assure our allies, and to deter aggression. That’s why we are here.

“For the Soldiers of the Air Cav, thank you for being part of the ‘Big Red One,’” Meyer continued. “Thank you for your service to our nation and defending freedom. It has been an honor to serve with you.

“For the Soldiers of the Iron Eagles. Welcome to the ‘Big Red One’ and V Corps. We are proud to serve alongside you and to continue to defend the values which make our nation great,” Meyer concluded.

During the rotation, the Air Cav flew over 12,500 hours in 11 different countries. The First Team aviators executed 17 urgent real-world MEDEVAC missions and provided multi-functional aviation support during four Tier 1 and three Tier 2 NATO exercises, partnering with other U.S. Army forces, as well as allies and partners throughout Europe.

“The transfer of authority between the 1st Air Cavalry Brigade and the Iron Eagle Brigade marks a change in units but not a change in dedicated support to assure our allies and partners and deter our enemies who may wish to do harm to those who share our common values,” Col. Timothy Jaeger, 1st ACB commander, said during the ceremony.

The 1AD CAB will build upon Air Cav’s successful re-imagining and elevation of the RAF CAB’s ability to support and train with ground units in over 11 different countries.

“Today, we establish a new tradition and forge a new partnership with the community of Powidz, Poland,” said Col. John Morris III, 1AD CAB commander. “For the first time, the headquarters of the Regionally Aligned Forces Combat Aviation Brigade is on these grounds.

“The uncasing of our colors here today signifies the beginning of a new and exciting mission together,” Morris continued. “It serves as a powerful reminder of our commitment to Poland, the greater European community, and the NATO alliance.”

The majority of the Air Cav Brigade has already redeployed back to Fort Hood. The unit’s colors uncasing ceremony, to officially mark Air Cav’s completion of the deployment, was held on Cooper Field, Sept. 14.

“First Air Cav troopers, you represent an innovative and trusted fighting force that is a testament to the extraordinary efforts of its officers, noncommissioned officers, and Soldiers, and is keeping with the rich history of both the First Cavalry and First Infantry Divisions,” Jaeger said. “Your collective contributions, past and future, are invaluable to the support of the EUCOM theater, in order to promote continued peace and stability while assuring our allies and partners and deterring our enemies.”