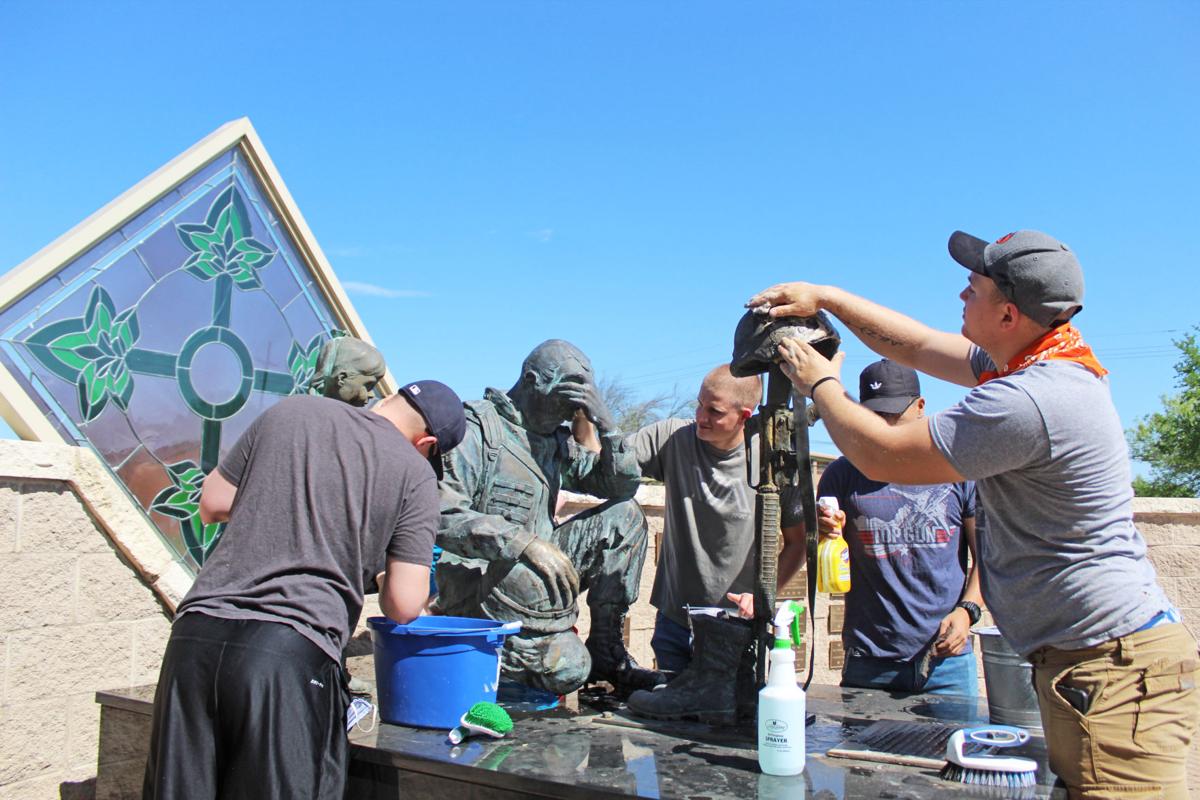 Garryowen troopers honor the fallen by cleaning the bronze centerpiece of the 4th Inf. Div. Memorial Friday. The unit is hoping to rededicate the memorial for Memorial Day. 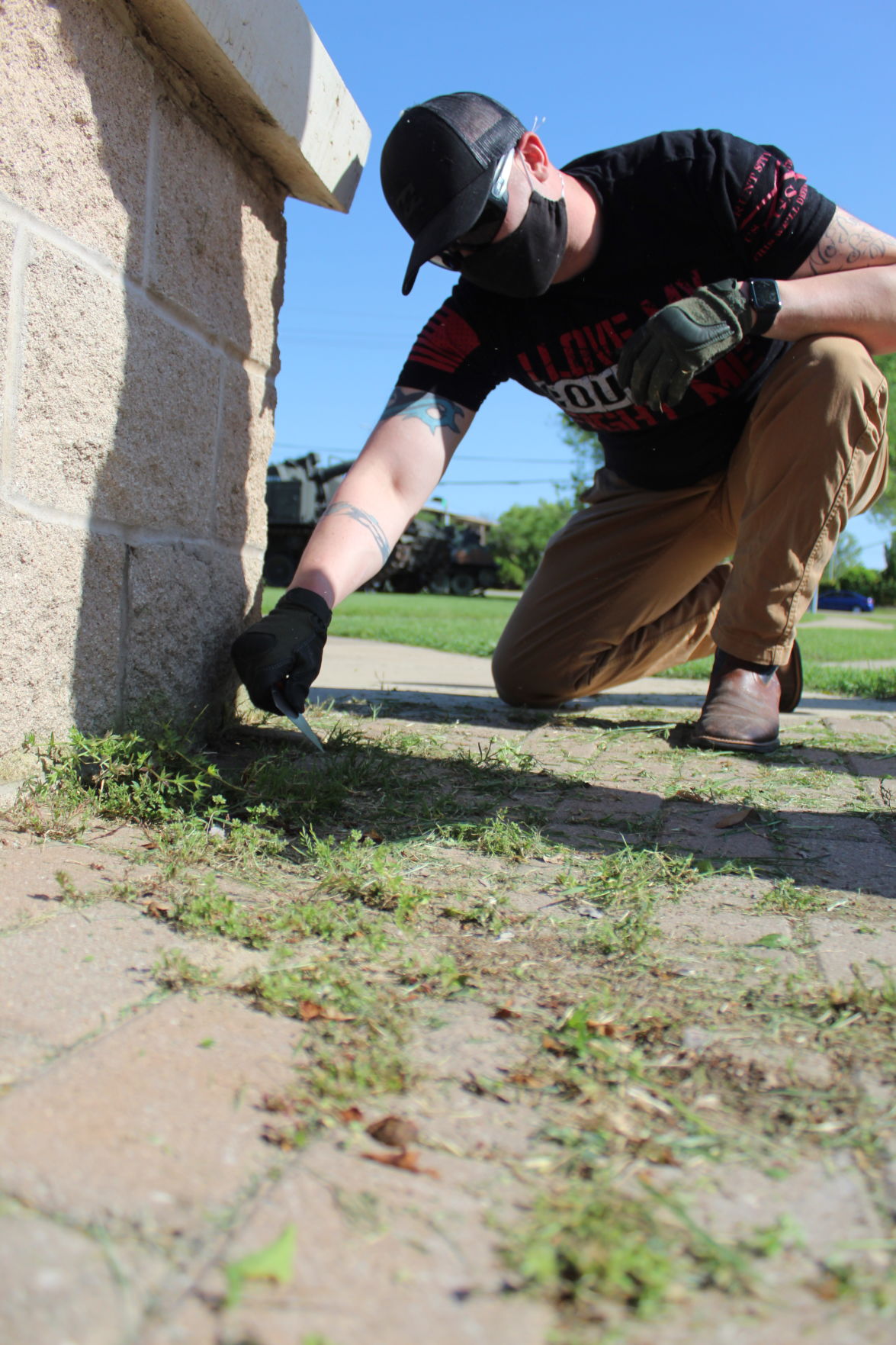 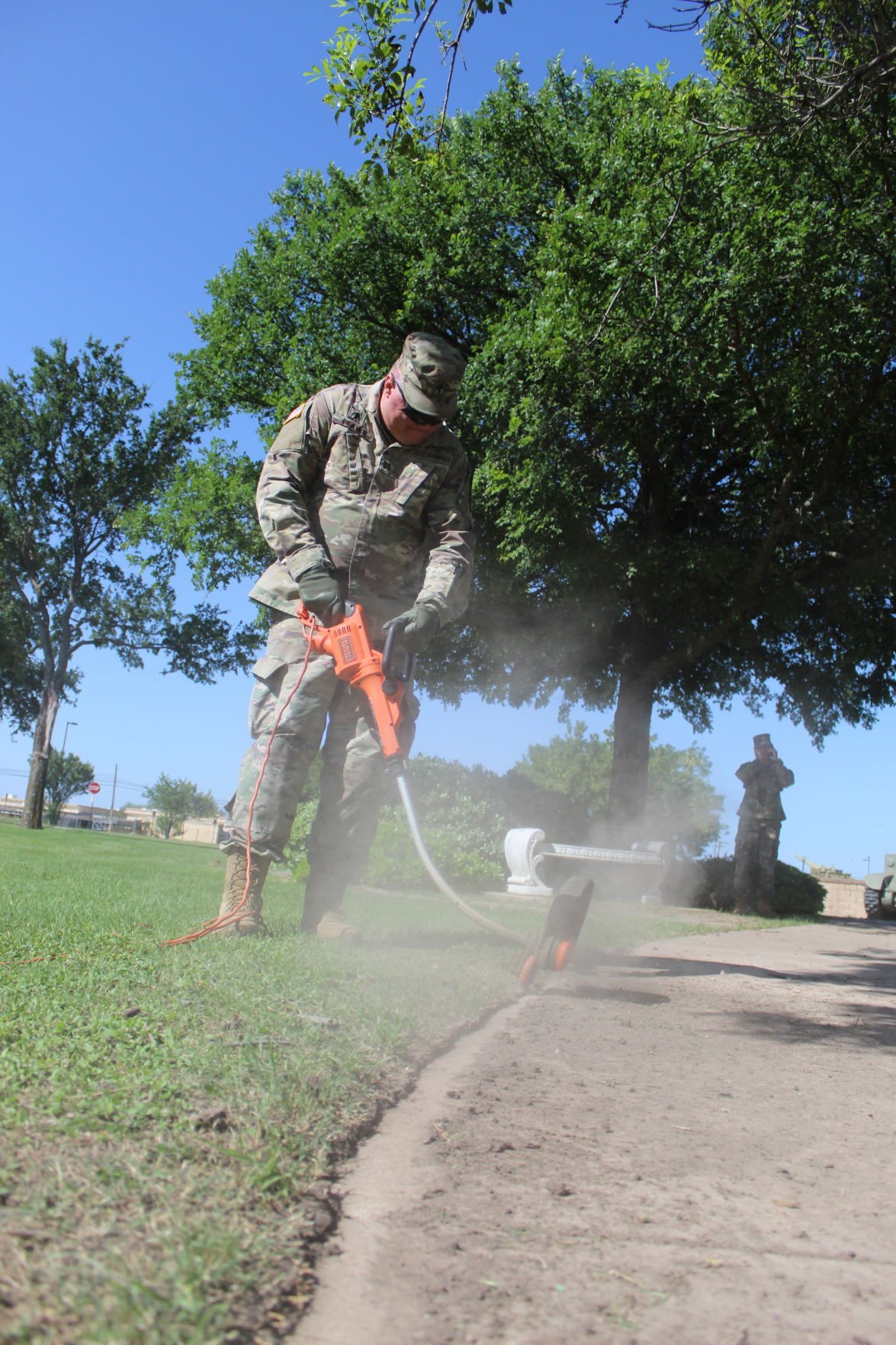 Chaplain (Capt.) William Beaver, chaplain of the 1st Bn., 7th Cav. Regt., trims along a sidewalk beside the 4th Inf. Div. Memorial, Friday, as the Garryowen troopers clean up the memorial. 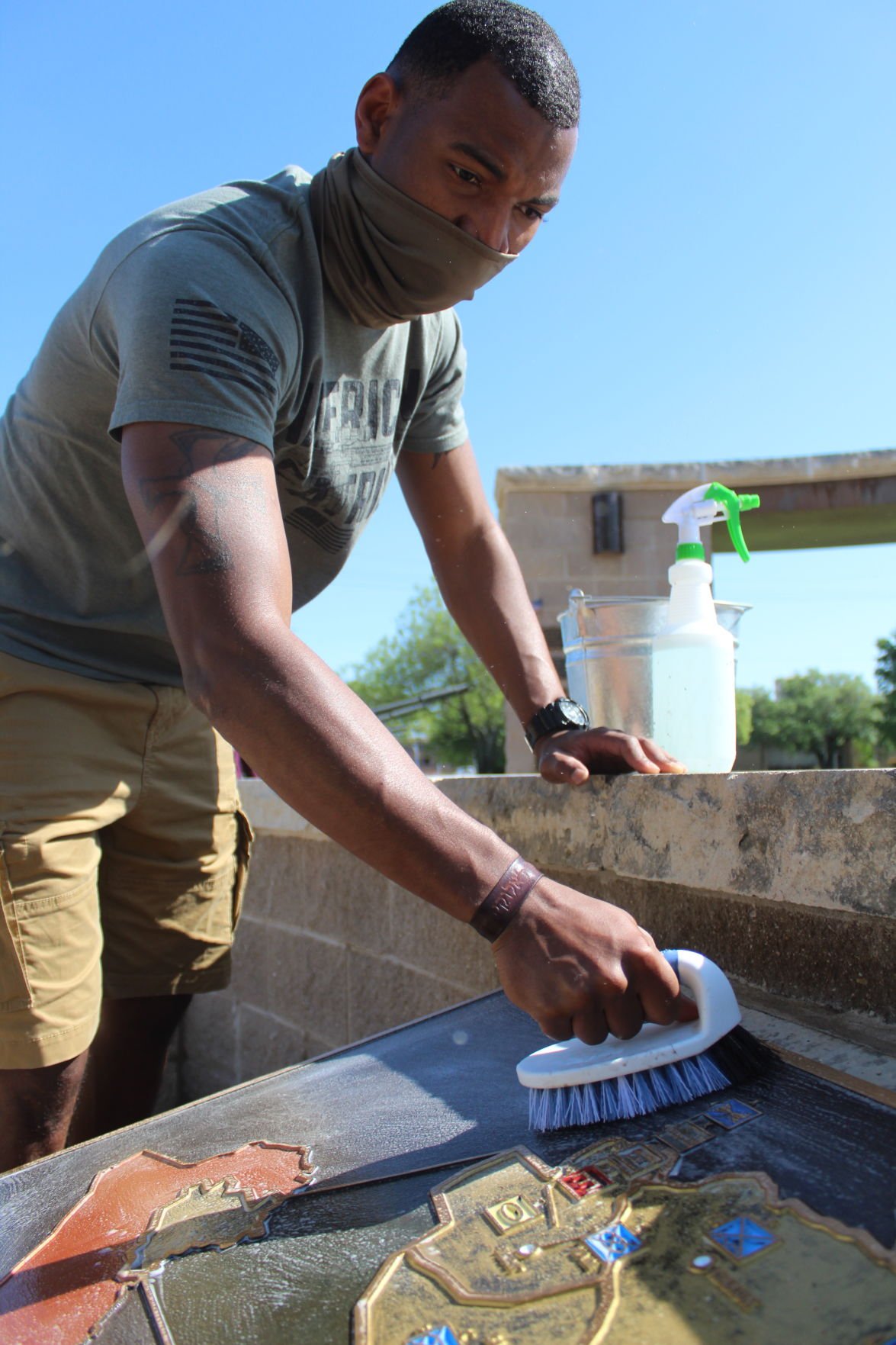 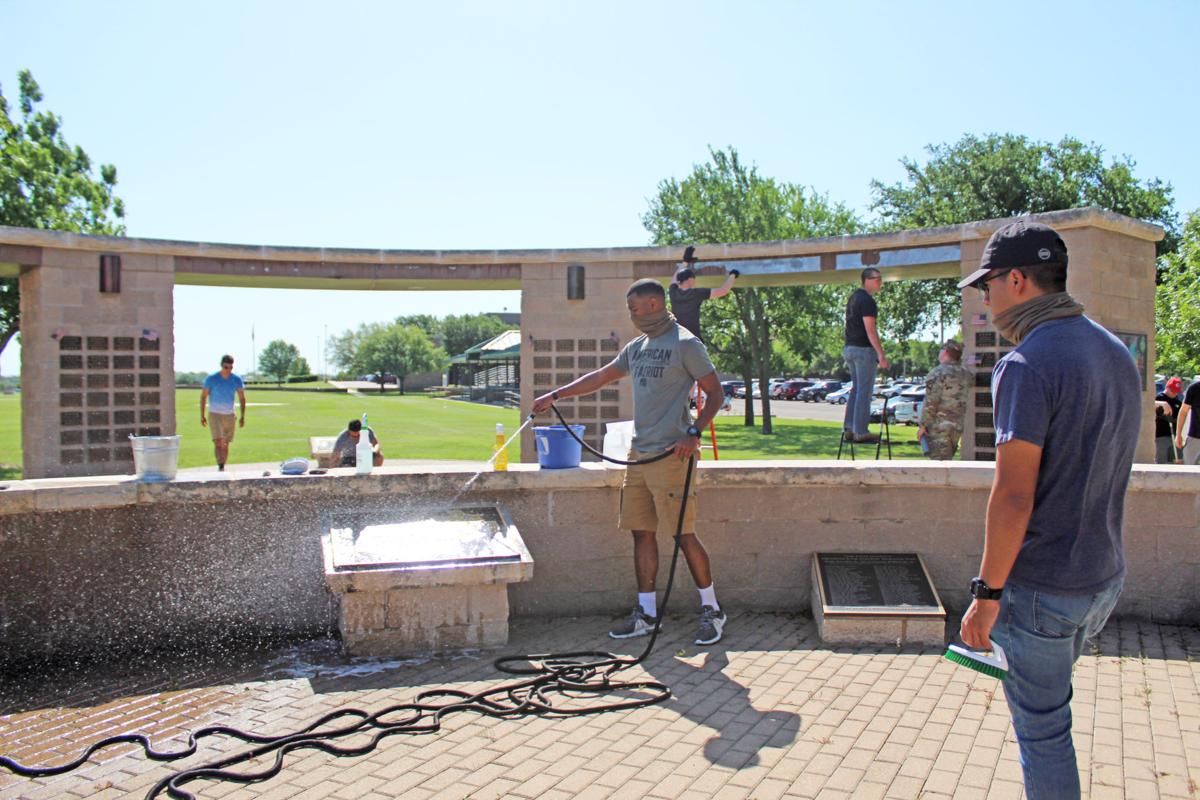 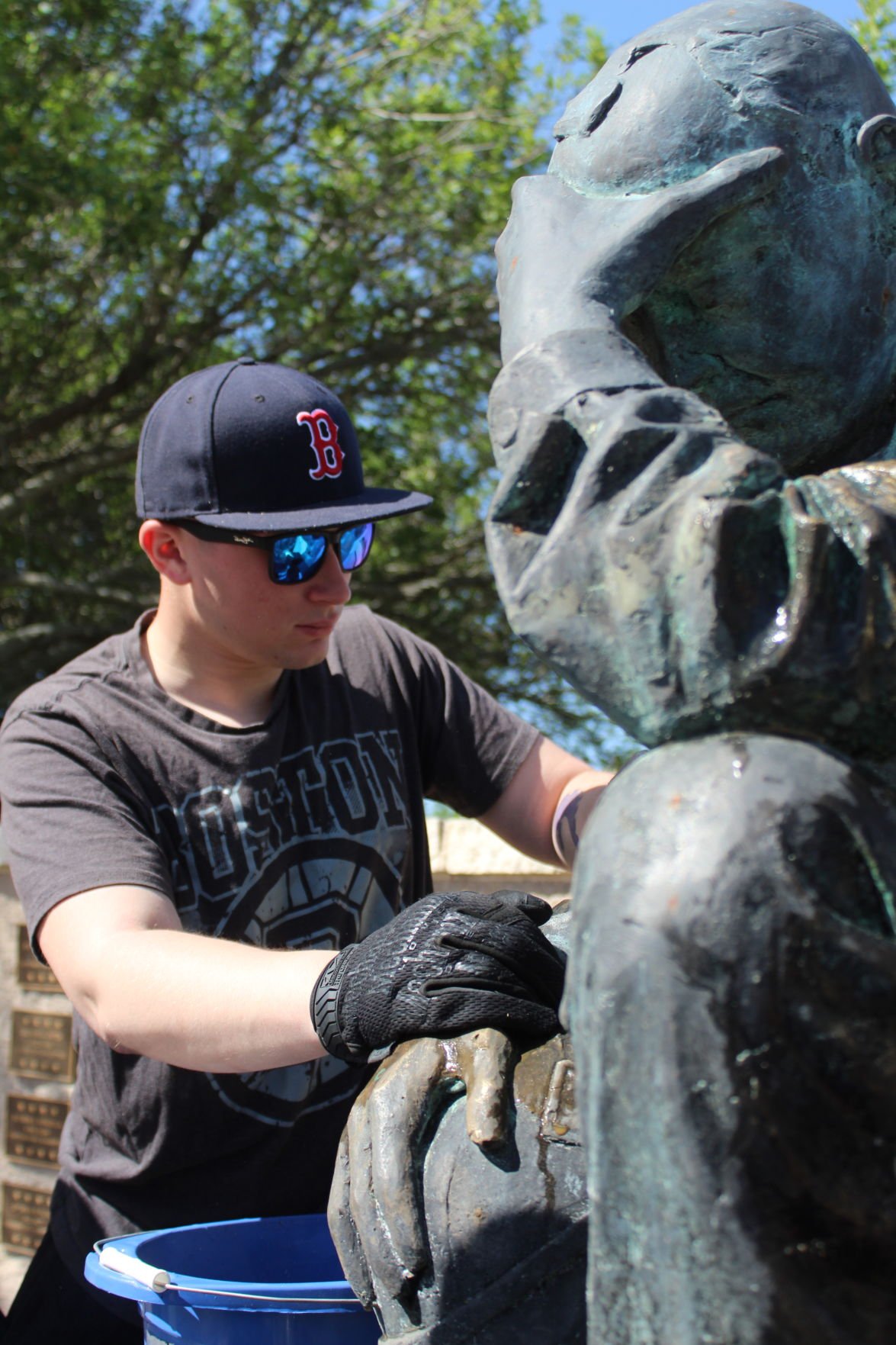 Garryowen troopers honor the fallen by cleaning the bronze centerpiece of the 4th Inf. Div. Memorial Friday. The unit is hoping to rededicate the memorial for Memorial Day.

Chaplain (Capt.) William Beaver, chaplain of the 1st Bn., 7th Cav. Regt., trims along a sidewalk beside the 4th Inf. Div. Memorial, Friday, as the Garryowen troopers clean up the memorial.

“These are the names of the troopers who lost their lives during three rotations to Iraq,” Chaplain (Capt.) William Beaver, said as he pointed to the bronze name plates surrounding the 4th Infantry Division Memorial.

Honoring the sacrifice of 113 fallen Ivy Division troops, the 1st Battalion, 7th Cavalry Regiment troopers have decided to adopt the memorial as their own – to care for the grounds, clean the monument and repair any damages. More than 20 Garryowen troopers volunteered their time Friday to return the downtrodden memorial to its former glory.

“You can see that people are still leaving tokens and mementos here. This is a lot of memories. Every single plaque is associated with a trooper, their unit, their family, their state and their country,” Lt. Col. Richard Groen, commander of 1st Bn., 7th Cav. Regt., explained. “We get to honor so many people who have given the ultimate sacrifice.”

Groen said he found out the memorial wasn’t being cared for properly from his wife, who was taking a walk through the memorial, which stands to the west of Cameron Field. After seeing the site himself, the commander spoke with his sergeant major and chaplain, before asking the garrison commander if the Garryowen troopers could become caretakers of the memorial. Groen and Beaver said they have short and long term goals for the memorial, which they hope will result in a rededication of the memorial on Memorial Day.

The memorial was originally dedicated on Sept. 4, 2004, when the Ivy Division was still stationed at the Great Place, with an additional wall and seating area added in 2007 for the names of those lost in Operation Iraqi Freedom 05-07. The centerpiece of the memorial is a bronze statue of a Soldier mourning a fallen comrade. The statue was sculpted by local artist Khalid, out of two statues of Saddam Hussein on horseback that were once atop two towers at a palace in Tikrit, Iraq.

Recalling his father’s emotions when visiting the Vietnam Veterans Memorial in Washington, D.C., for the first time, Beaver said he can imagine the memorial for the 4th Inf. Div. fallen is just as emotional for veterans and family members. By caring for the memorial, he said, they are showing how much they care and honor the fallen.

“The sacrifices they made inspired me to join the military,” Sgt. Carderius Saine, who has served for seven years, said. “I’m honored to be out here to honor them.”

While some of the short term goals include removing weeds and grass that have grown between the stones, trimming trees and cleaning the monuments, long term goals include repainting areas, replacing lights and repairing a cracked stained glass monument. One of Groen’s first goals is to raise the American flag.

“I’m not sure when the last time someone put the colors up here,” he said. “How important is it to have our nation’s fallen represented by our nation’s colors? We are going to honor the Ivy Division’s fallen.”

Groen said all the troopers who participated in the clean-up were volunteers, with a majority comprised of the younger generation of troops. He said it is an honor to serve as the commander for Soldiers who display the Army Values through their actions.

He explained they are showing loyalty and respect to their country and fellow trooper. They are displaying integrity by doing what’s right. They are also demonstrating honor and duty by honoring the fallen.

“We’re doing the right thing and I’m tremendously proud because when we see something wrong, here we are today and in full force,” Groen said. “We’re going through a tremendously tough time as a nation right now, but we have the ability to still give back.”

Concluding, Groen said he knows there are Ivy Division veterans in the greater Fort Hood communities and hopes people come visit the memorial and honor the fallen.

“Even though 4th ID is at Fort Carson, if anybody has the opportunity to pay their respects,” he said, “that would be tremendous.”