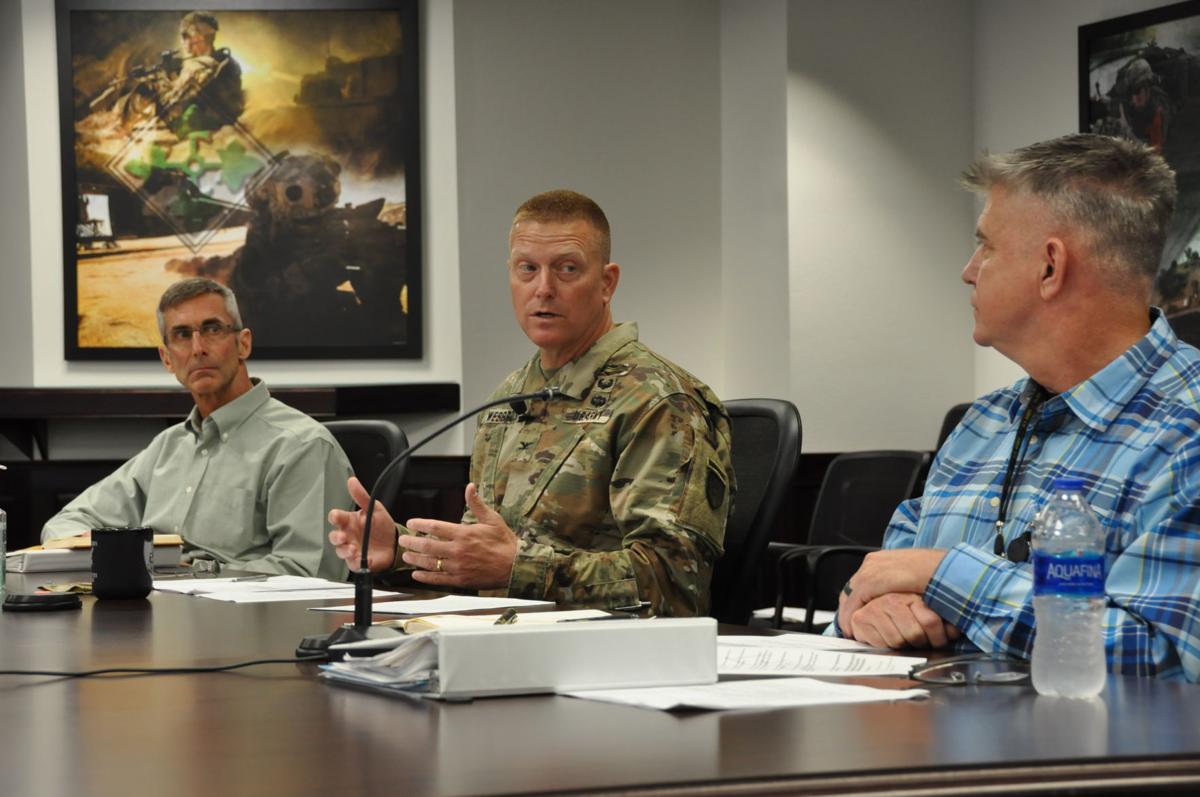 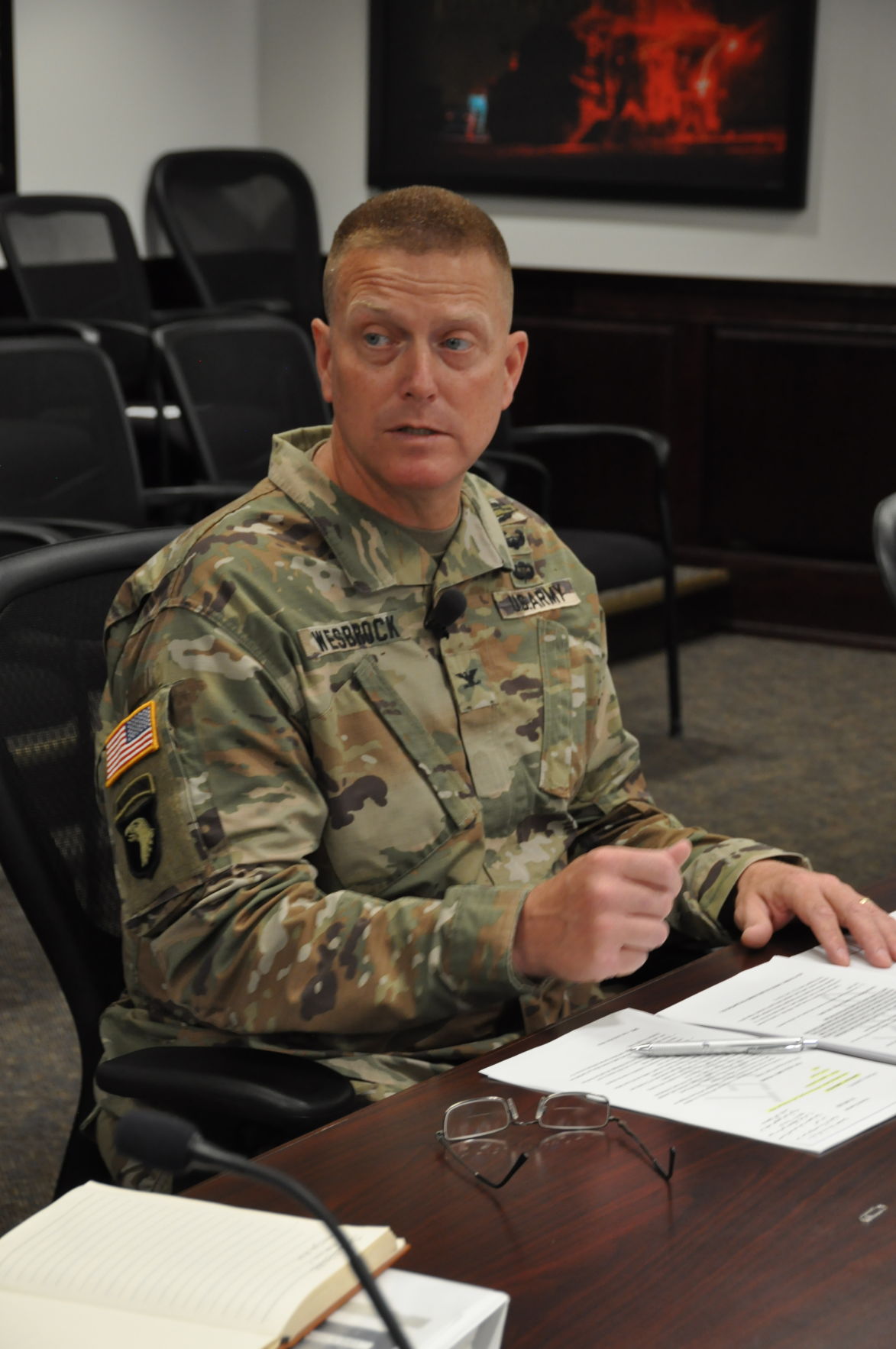 “The goal here remains to provide safe and healthy homes for our Soldiers and their families,” Wesbrock said.

Topics of conversation varied from trash pick up, to lawns and curb appeal, but the main focus of the town hall was to talk about the improvements made to quarters on the installation.

“I will tell you that significant progress has been made over the last year,” Wesbrock said. “There’s been a lot of focus and effort. We’ve had a lot of help from some of the residents at identifying issues and some of the residents are holding us accountable, which I appreciate. We’ve worked very hard and diligently to improve our processes, and that being said, we’re still not done. There is still work to do here at Fort Hood.”

One of the main focal points over the past year has been the remediation of mold in housing on Fort Hood. Wesbrock said a lot has been done and he is confident Lendlease is working through the problems they’ve had with the issue.

“They’ve got some great contractors, third party contractors, that they bring in that do testing that do remediation of household goods, and they’re doing that in line with the Texas state requirements,” he said. “So, that’s not to say that everything is good, there are still some challenges and we will continue to address those challenges as we are made aware of them. So please, if you have mold issues in your home, please come up on the net.”

Wesbrock said he knew there are families on post who have had challenging situations with the mold remediation process and apologized for the inconveniences.

“I’m sorry that the families have had to work through that,” he said. “We are working as diligently as we can to resolve issues and I know that some of you will say that it’s not enough. We will continue to be dedicated, we will work hard and we will try to resolve the issues as quickly as we can.”

Several comments and questions were raised about gate closures in housing areas.

Wesbrock said he directed the closure of access control points within the noncontiguous housing areas, such as Pershing Park, due to complaints about crime and unauthorized personnel cutting through the neighborhoods to skip traffic lights.

“We’re actually seeing some benefits from that,” he said. “The (military police) are able to do access control points and they’re finding people coming on the installation with warrants, with firearms and with drugs that shouldn’t be on this installation.”

Addressing backlogged work orders in housing due to work stoppage because of the pandemic, Albus said all work orders have been scheduled and he expects them to have them completed by the end of June.

“That caused us to have a backlog of 800 open work orders,” he said. “We’ve focused the teams in order to get back out again and we’ve gotten that backlog down to 33. With regards to progress made on these backlogged work orders, I think, we’re actually one of the best posts that are out there across the entire (Lendlease) portfolio.”

Dosa also said DPW is working to get facility work orders in the barracks caught us since the pandemic shelter in place was lifted.

“You could imagine over a six-week period, we developed quite a large backlog of routine work that needed to be done,” Dosa said. “Since then, we brought our DPW workforce back and we’re working very, very hard to get after that backlog in all the other buildings across Fort Hood.”

Pest control in the barracks and in housing was also a hot-button topic with residents. Albus acknowledged the concern and said to contact Fort Hood Family Housing with any problems with the matter in the housing areas.

“Just keep in mind that there are certain conditions and issues that are outside of our control, so there may be follow-on work orders that need to be executed in order to ultimately address the problem and the conditions,” Albus said. “We have in Fort Hood Family Housing decided to hire an additional pest control technician, so hopefully, we’ll have that person on board here in the very near future to help with that volume of work.”

Due to the COVID-19 outbreak, the June 25 housing update was the first meeting without a live audience, either through Facebook Live or in-person audience. Wesbrock said he hopes the next session will return to live status, but said the event was a success, considering ample questions and comments previously submitted by residents.

“This was not my ideal method to do it, but that was a method of feedback that came in. Frankly, there were a lot of issues that are concerning, that were raised by residents,” he said. “I have six pages of comments from family members that have issues in housing, and that’s something that we need to address.”

Wesbrock added there is still room for improvements in Fort Hood housing and pledged to resolve them.

“We’ve been at this for a year and I know that a lot of progress has been made by our Fort Hood Family Housing partner. We’ve put a lot of time and energy in efforts into solving some of these issues, but we still have work to do,” the garrison commander said. “So, I’m committed to doing that as is our Fort Hood Family Housing partner and our DPW team, committed together, to make sure that we have safe and healthy homes, here on the installation for our families.”