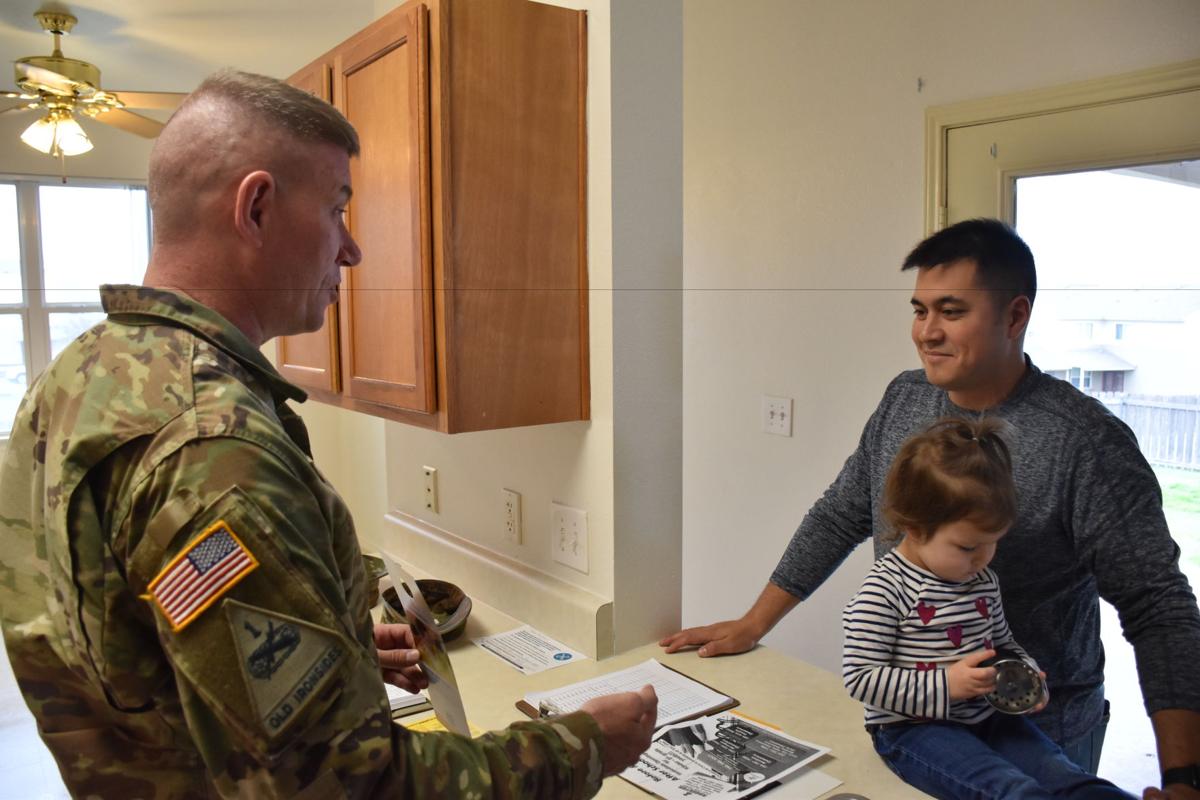 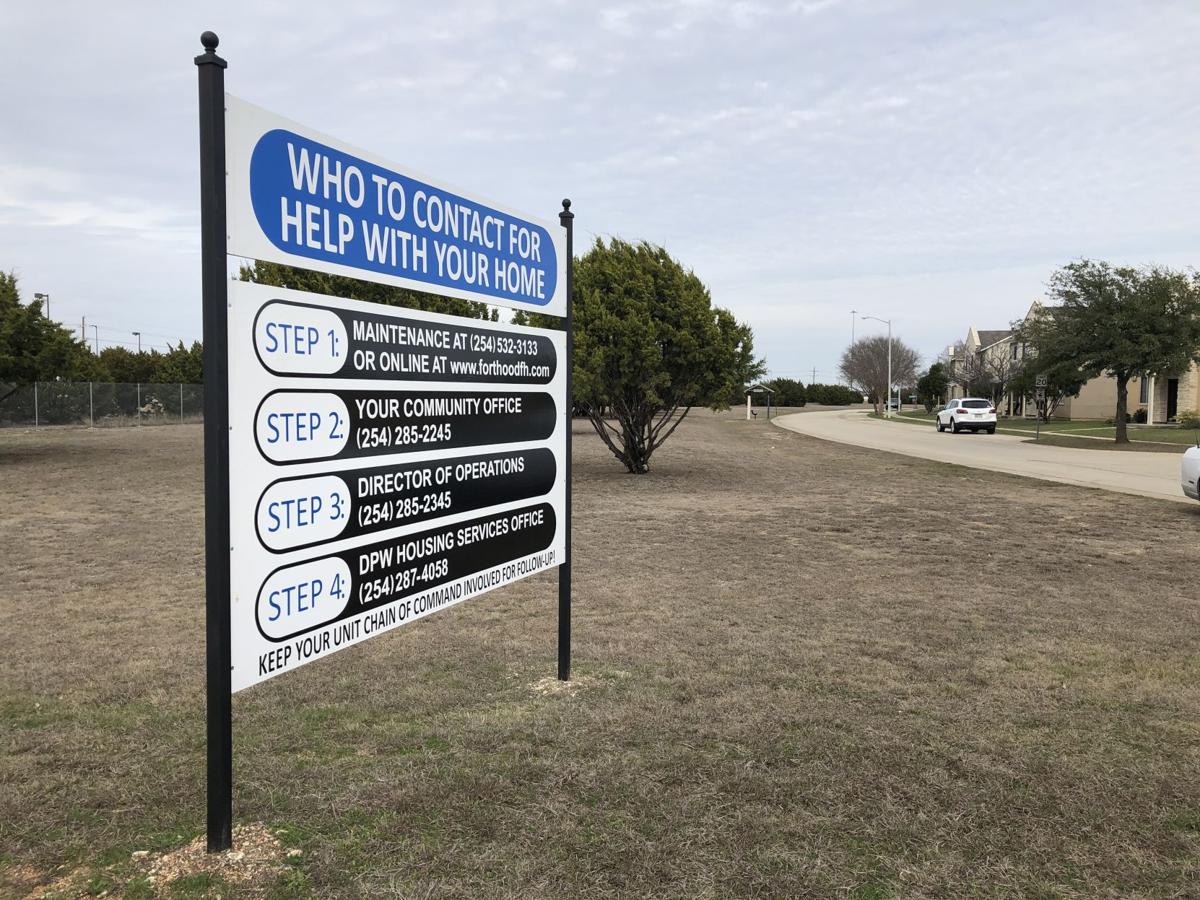 A sign at the entry to Kouma Village provides residents with contact information to handle housing issues. These signs are posted in every Fort Hood family housing area. 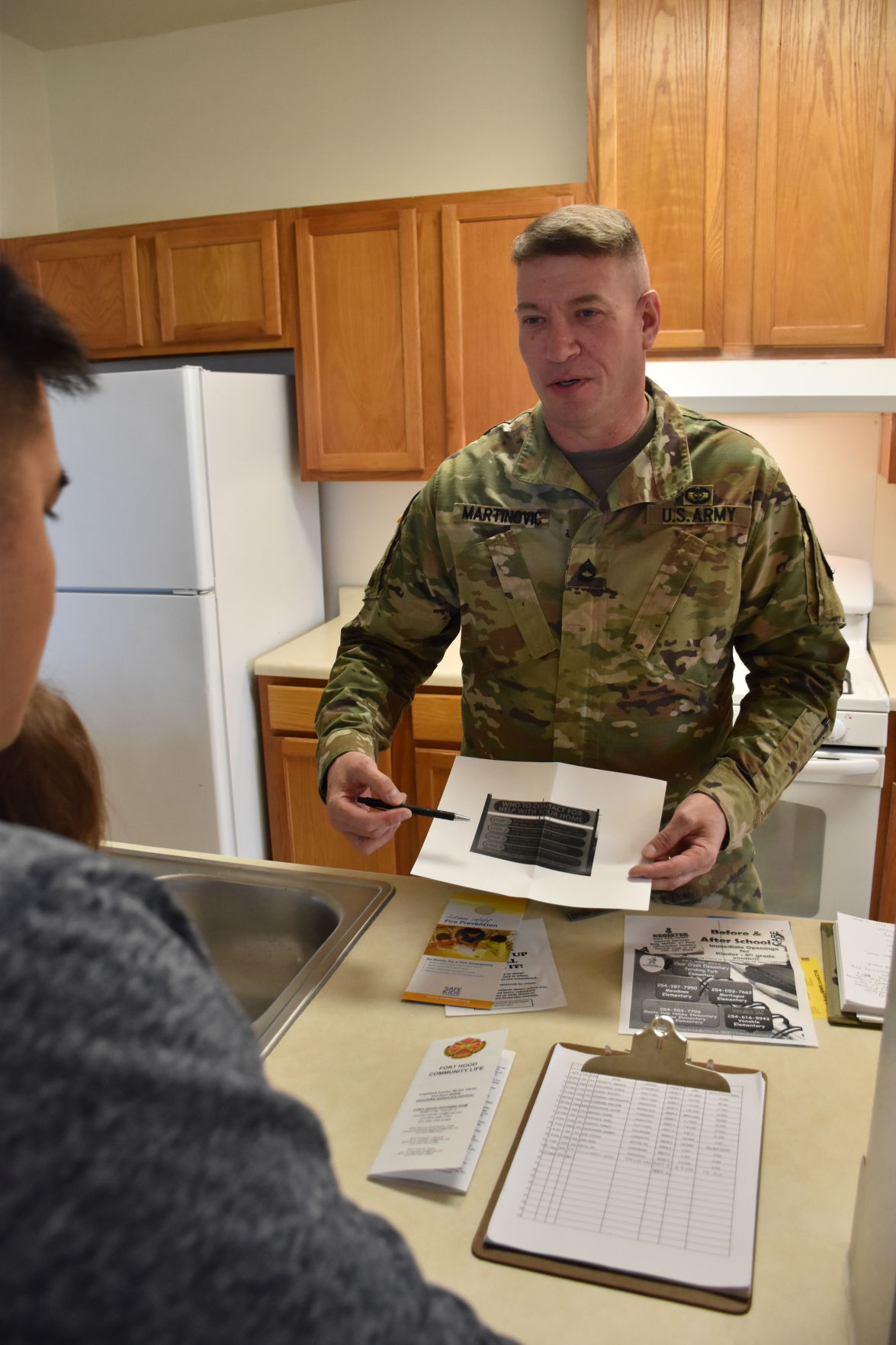 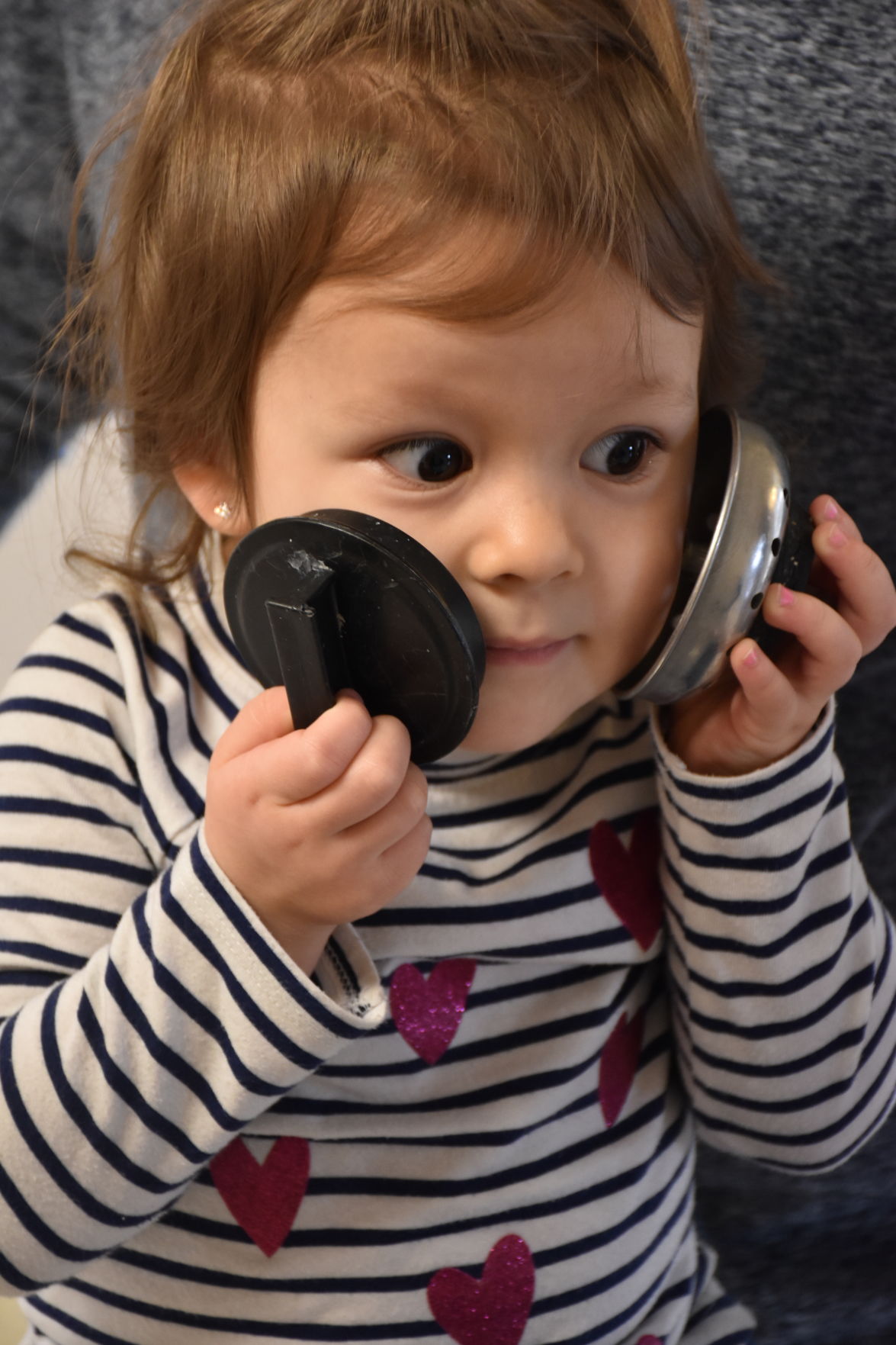 Coralynn Grabitz plays peek-a-boo with sink stoppers inside a four-bedroom home in Kouma Village Jan. 13. Coralynn, her parents and her two sisters conducted a walk-through inspection of the home as the first step to moving into their new home. 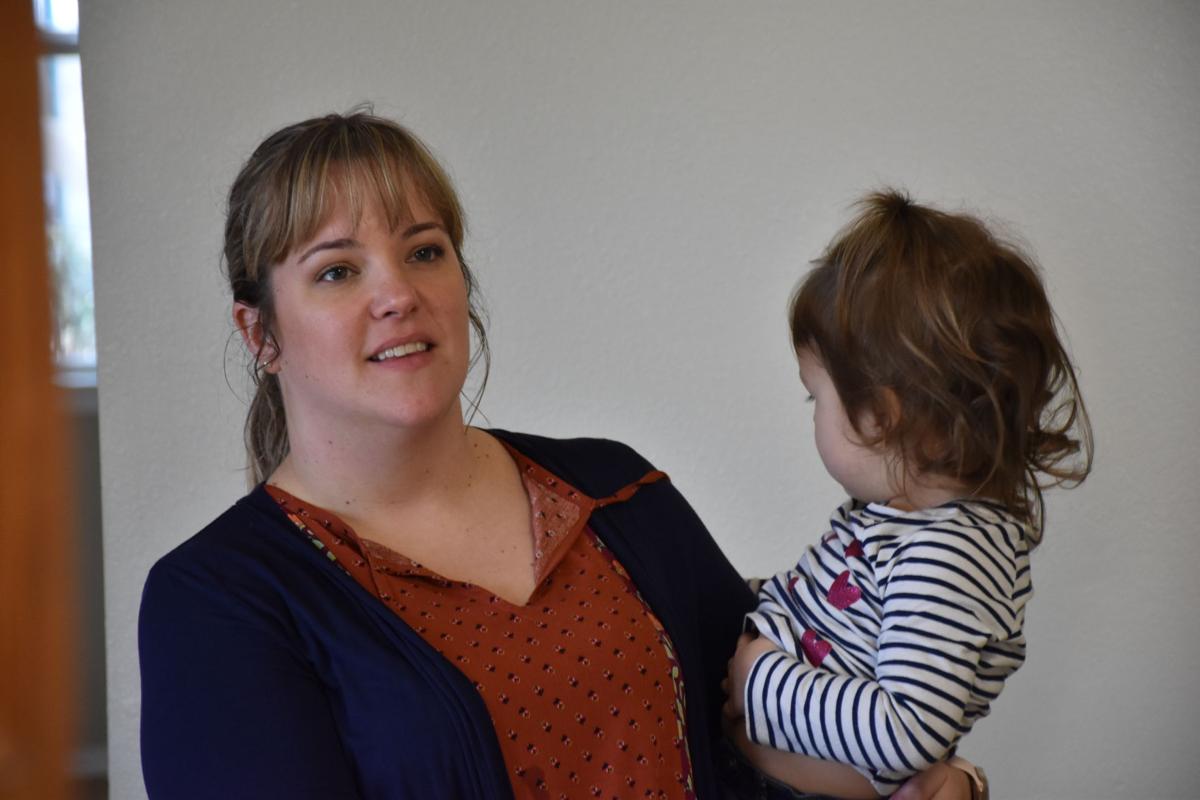 Patricia Grabitz discusses the move-in process at a four-bedroom home in Kouma Village following a walk-through of the quarters, Jan. 13, while holding her 2-year-old daughter Coralynn. 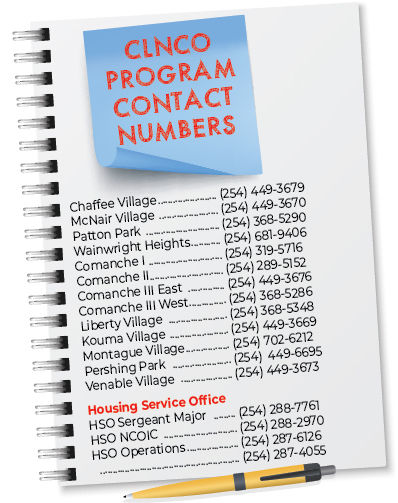 A sign at the entry to Kouma Village provides residents with contact information to handle housing issues. These signs are posted in every Fort Hood family housing area.

Coralynn Grabitz plays peek-a-boo with sink stoppers inside a four-bedroom home in Kouma Village Jan. 13. Coralynn, her parents and her two sisters conducted a walk-through inspection of the home as the first step to moving into their new home.

Patricia Grabitz discusses the move-in process at a four-bedroom home in Kouma Village following a walk-through of the quarters, Jan. 13, while holding her 2-year-old daughter Coralynn.

His mission? Assist an Army family during their initial walk-through of the quarters with a representative of Fort Hood Family Housing, the contracted service provider of Army family housing at the Great Place, operated by Lendlease LLC.

Martinovic is the Community Life Noncommissioned Officer Program representative at Kouma Village. He’s been working in the housing community for nearly three months, detailed to the assignment from the 1st Medical Brigade. The walk-through is the first opportunity he can engage a family.

Since the CLNCO program was rejuvenated in mid-summer 2019, its members have the mantra to assist all Soldiers in the rank of sergeant and below as they go through the process of signing for their on-post housing.

Martinovic’s clipboard of upcoming appointments with incoming troops includes more than just those in grades E-5 and below, though.

“Even experienced Soldiers still appreciate the information that we CLNCOs provide, and yes, sometimes they are surprised to see us, because in general, they are expected to know the process,” Martinovic said. “From experience, I can say when it’s your first time at a new duty station, it’s good to see the friendly face of a peer offering advice and knowledge of their new Army community. We CLNCOs provide that, and although we are required to meet the privates through sergeants, I feel all ranks benefit, so I try to meet everyone who comes to the village.”

On this day, he is meeting Sgt. Anthony Grabitz, a radio repairer in 2nd Battalion, 227th Aviation Regiment, 1st Air Cavalry Brigade, 1st Cavalry Division; his wife, Patricia; and their three little girls. The Grabitz family isn’t new to Fort Hood, having moved here from Fort Carson, Colorado, about three years ago, but this is the first time a CLNCO is assisting them with their requested move to Kouma Village. Patricia said the process of securing a home on the installation is much improved this time around.

“It was a lot better,” she said. “The first time, it was very rushed. It was like, ‘This is the house. Take it or leave it. There are other people in line to get this house. This is the best house, you should take it.’”

“It wasn’t like, ‘What home best fits your family,’” Patricia added. “This is the second house that we’ve seen here in Kouma because this is the village I knew that I wanted to live in. I just felt that they were really interested in what fit our family.”

Patricia said she was told that her family would be put on a waiting list to move from one on-post community to another. She said, “Put me on the list.” The family waited almost a year before this move.

“To me, it was worth the wait,” Patricia said. “He (husband Anthony) is going to go to Korea for a year, so I know I’ll be here for a year. He’s going to sign up for stability because we like this area and our family is just three hours north of here. We want to stay here as long as we can.”

Martinovic accompanied the family with the Lendlease representative during their walk-through of the four-bedroom quarters Jan. 13. Afterward, he met with the family to discuss the CLNCO program, explaining how the program is there to assist Soldiers and their families navigate issues, should they arise.

For the Grabitz family, the experience was very positive.

“The Community Life NCOs, they’re definitely going in a different direction,” Sgt. Grabitz noted of the change he’s seen since first arriving at Fort Hood three years ago as a specialist. “It’s nice to see that we actually have one meeting us face-to-face on move-in day for us. The process has been a lot more, I don’t want to say convenient, but it’s been more thorough and more tailored to what we need versus when we first got here.”

“As CLNCOs, we are advocates for the service members and their families,” Martinovic said. “Not only do we assist with the initial meeting and walk-through, we also act as a conduit for service members to the Housing Service Office sergeant major, the community center manager, the chain of command, maintenance and the military police.

We are here to receive suggestions, complaints and new ideas to help improve the Army communities in which we work.”

Sgt. Maj. Harold Cole Jr. is Fort Hood’s Housing sergeant major. He’s overseen the reinvigoration of the CLNCO program since he took over last summer. The emphasis of the program is helping Fort Hood Soldiers solve their housing issues while ensuring that Fort Hood leaders are engaged in the process. He said the program works if housing residents reach out.

“One thing we encourage our families to not do, is to suffer in silence,” Cole said in an interview with the hosts of Fort Hood’s Great Big Podcast Jan. 16. “As we’ve said at every (housing) town hall, sometimes it’s a matter of ‘We don’t know what we don’t know.’

If a family feels there is some sort of concern, just contact us. At the end of the day, don’t suffer because you didn’t bother to tell us. Don’t suffer in silence.”

Cole said he believes the CLNCO program works well at Fort Hood and would work just as well at any military installation. In fact, he said several Army installations have already reached out to him to discuss implementing something similar elsewhere.

This is the second house that we’ve seen here in Kouma because this is the village I knew that I wanted to live in.