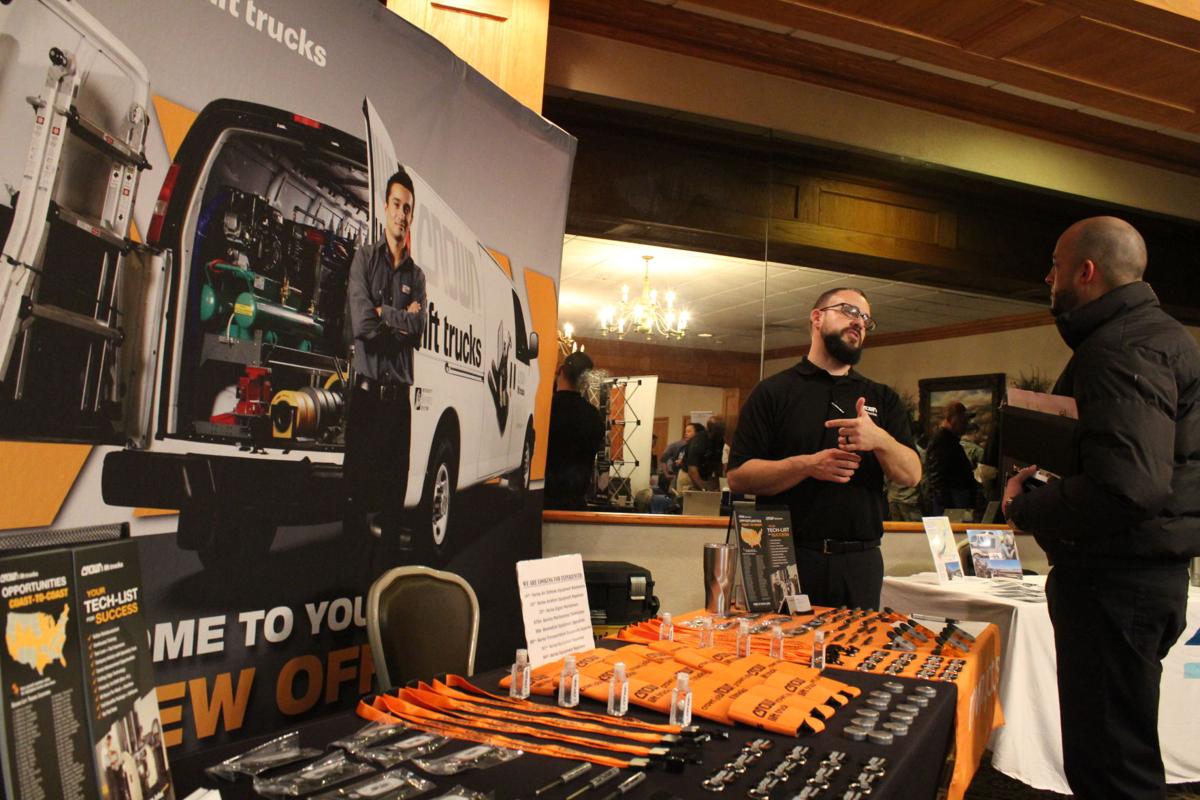 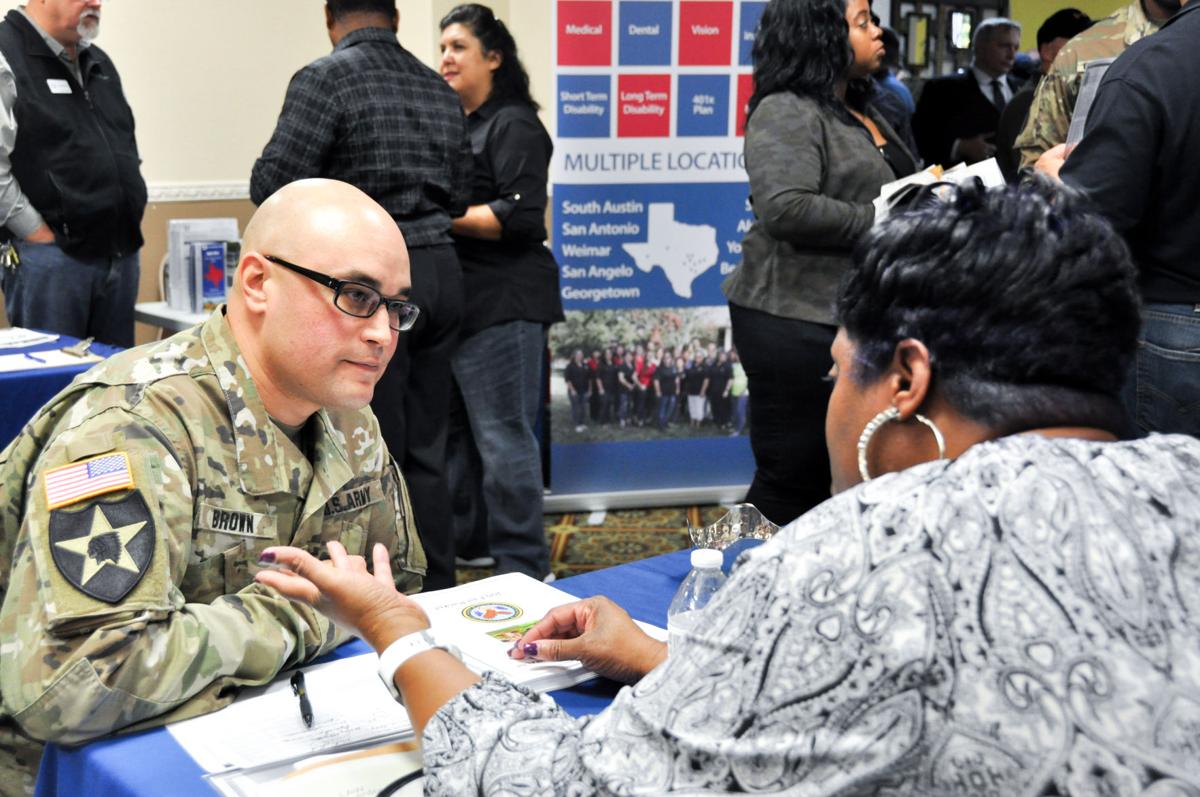 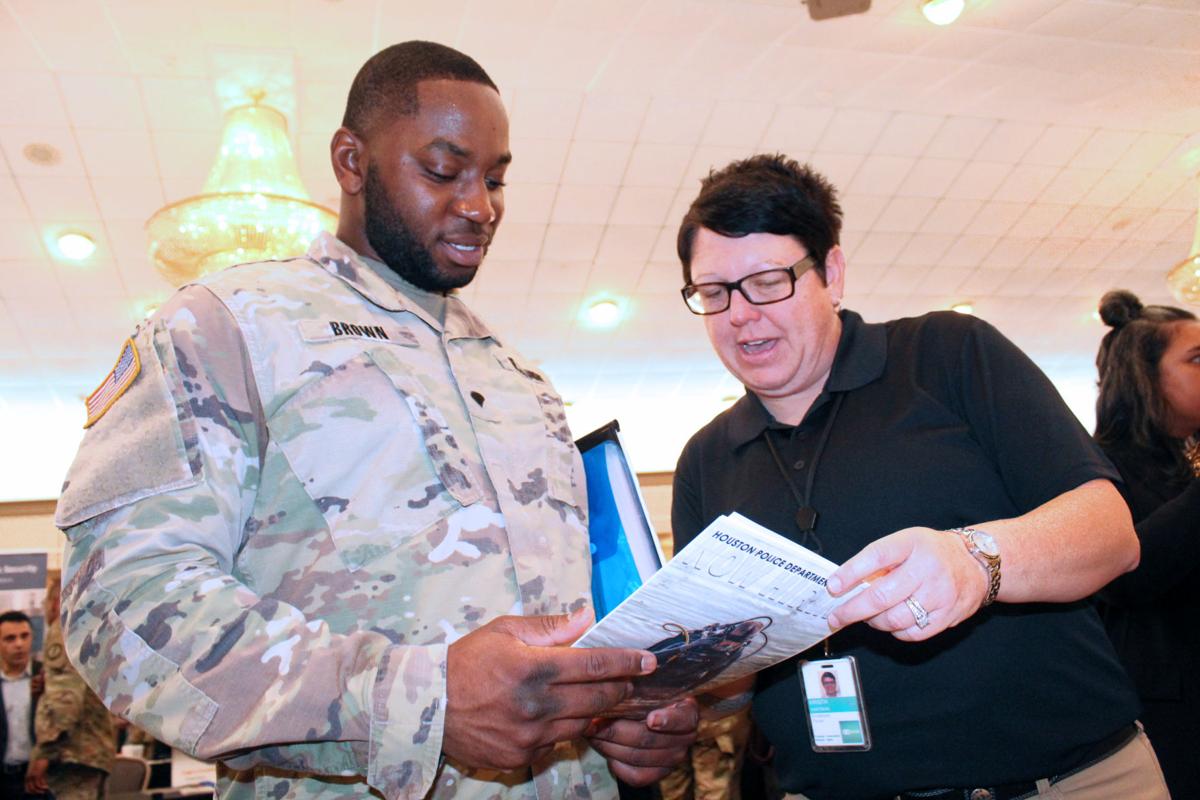 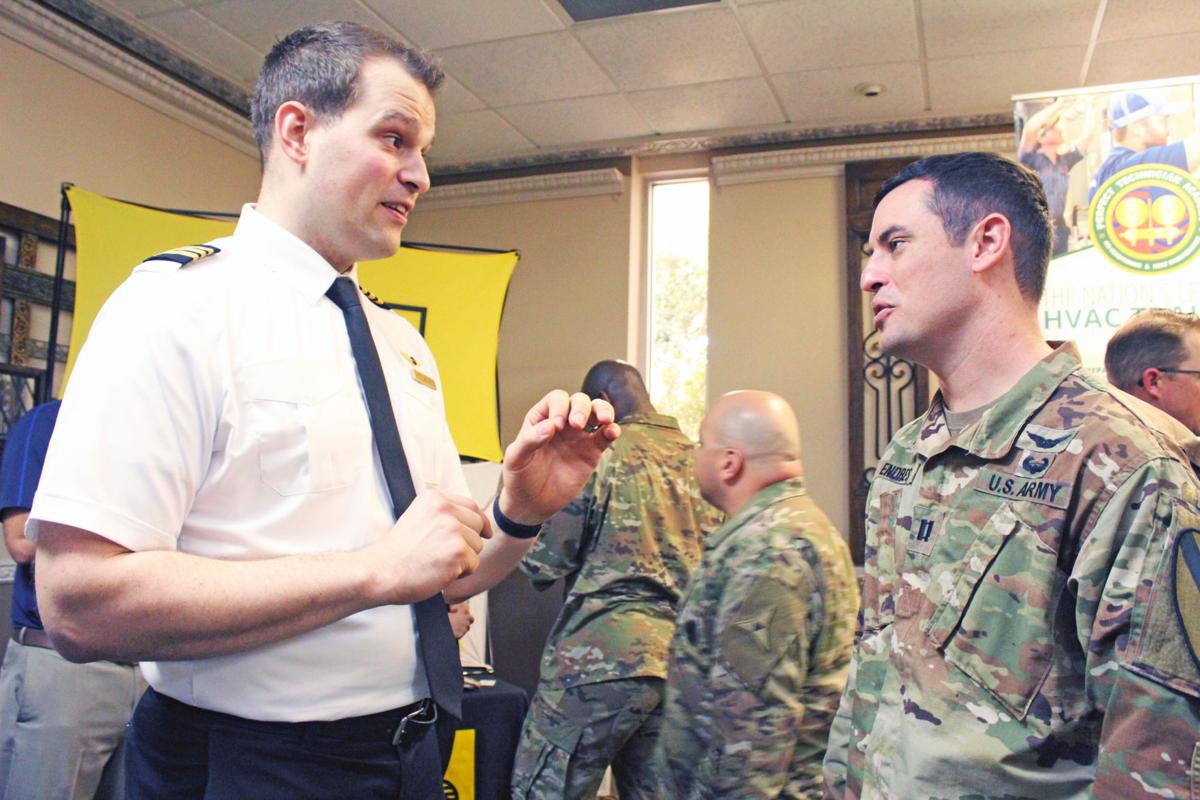 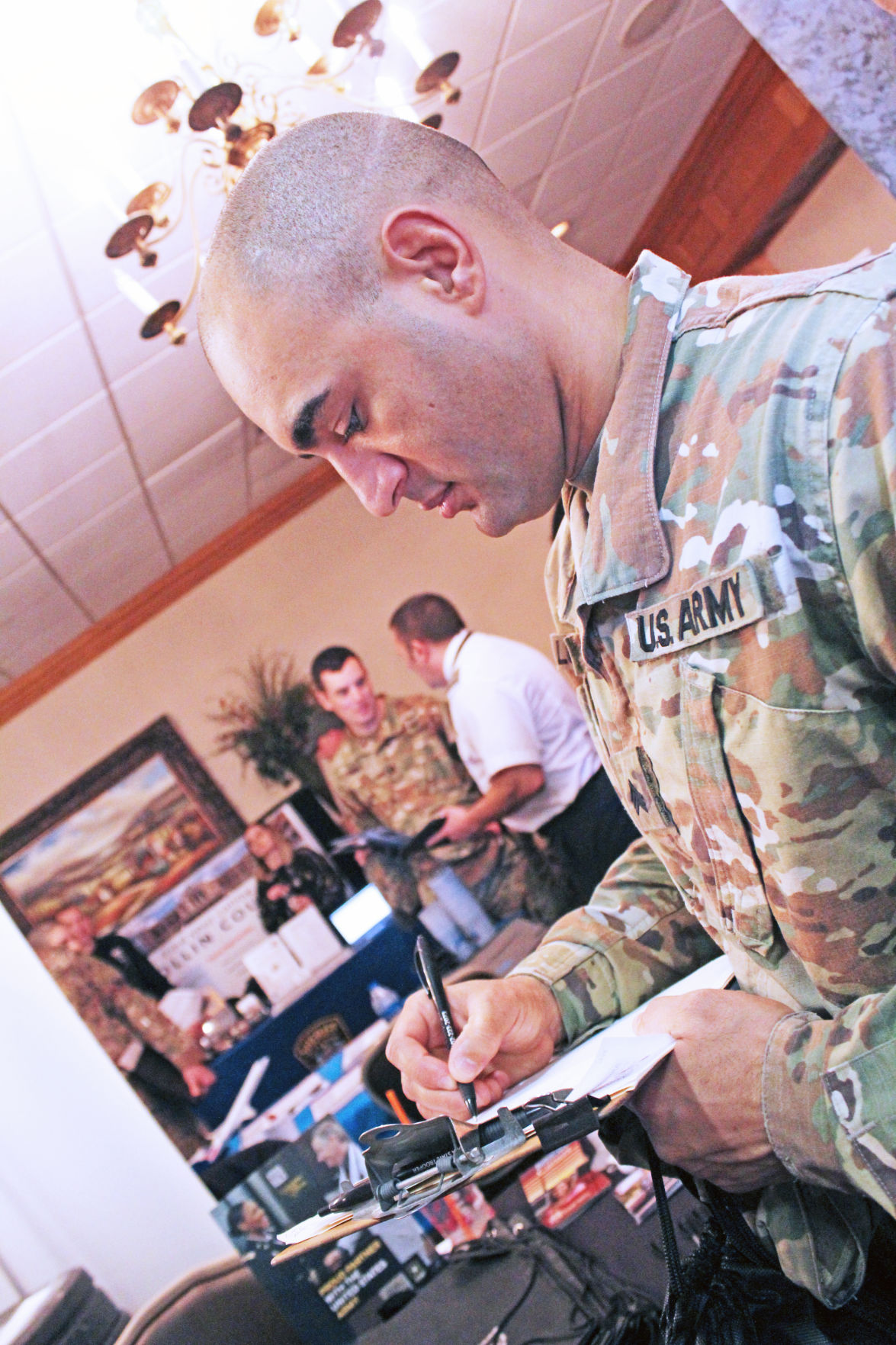 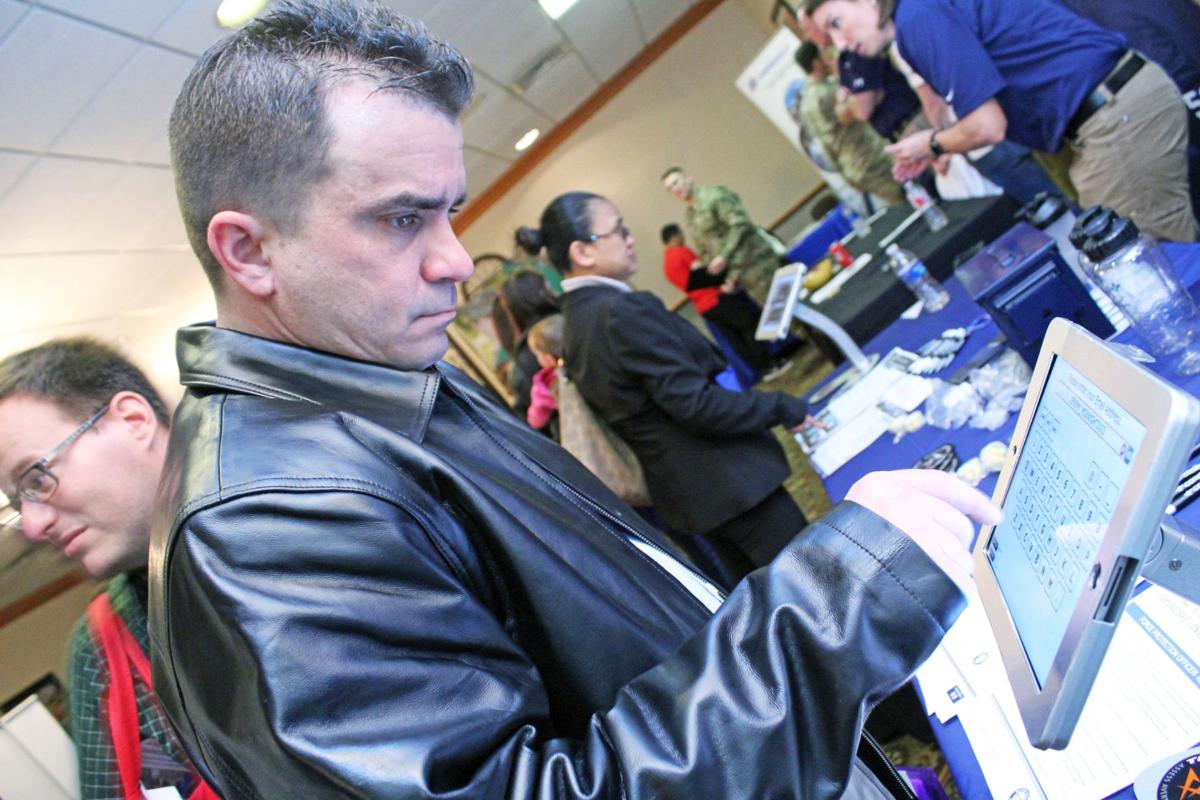 Sgt. 1st Class Jeremy McKnight fills out his information digitally for Triple Canopy, an international security company who was looking for employees Tuesday during the Mega Career Fair at Club Hood. The 3rd Cav. Regt. Soldier was among thousdands of people who attended. 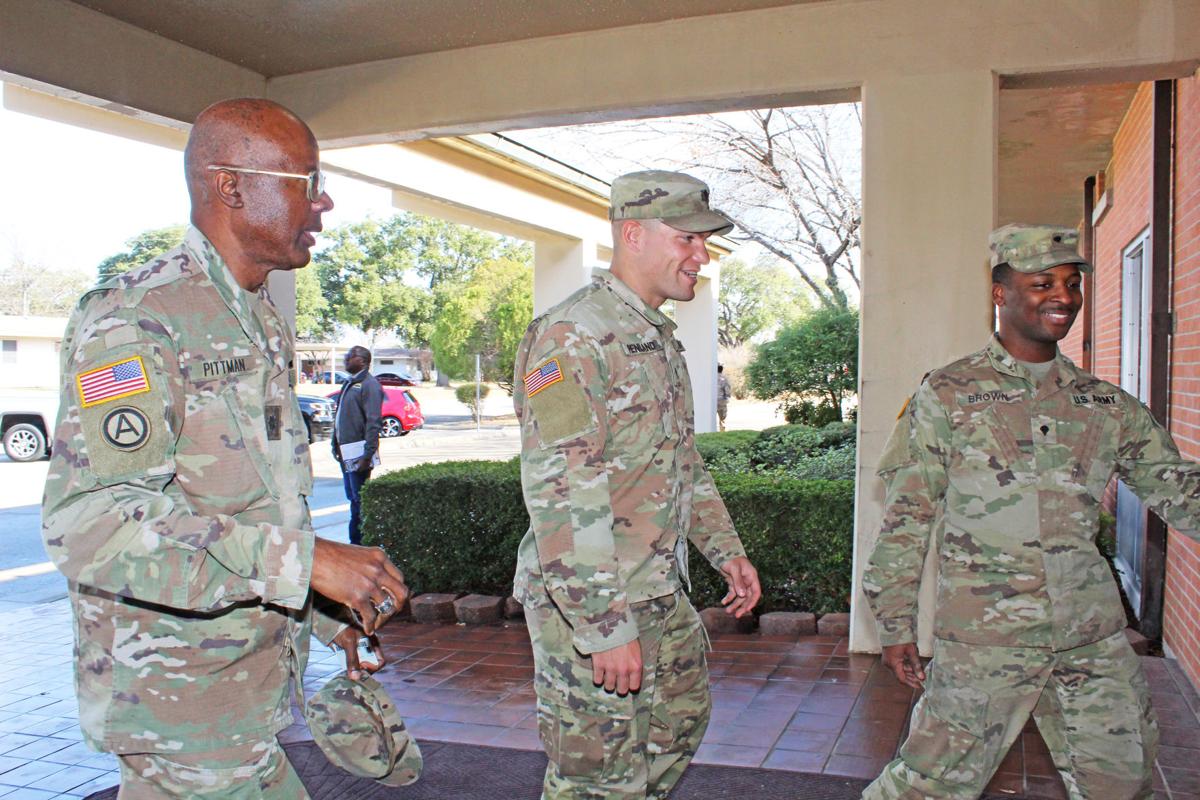 Sgt. 1st Class Jeremy McKnight fills out his information digitally for Triple Canopy, an international security company who was looking for employees Tuesday during the Mega Career Fair at Club Hood. The 3rd Cav. Regt. Soldier was among thousdands of people who attended.

Hoping to find their next career outside of the military, thousands of troops, family members, retirees and members of the community attended Fort Hood’s Mega Career Fair Tuesday at Club Hood.

“Today, we had over 105,000 jobs and 186 employers,” Jerry Hernandez, marketing supervisor for Fort Hood’s Soldier for Life – Transition Assistance Program, said. “We’ve got everything … big corporations – Amazon, GMC. We’ve got small companies also. There’s a new one called Your Hire, which is based out of Austin.”

This was SFL-TAP’s 44th Mega Career Fair and Hernandez revealed the goal of the fair is to help transitioning Soldiers find, not just a job, but a career outside of the military.

“They served in the military and we want to set them up for success,” he said. “We help them transition to their next career.”

Hernandez said there were between 3,500 to 5,000 attendees to the career fair, providing a variety of positions for troops based off of their skills. He said the most popular career fields are law enforcement and first responders, but truck driving, health care and information technology are also very big at the moment.

Sgt. Maj. Demita Vital, 11th Theater Tactical Signal Brigade, who is retiring after 30 years of service, said she came to the career fair looking in the IT or human resources fields. The latter career option is something in which Vital believes she has the right experience.

“I believe in putting the right people in the right position,” she said. “That’s a gift I just love to do.”

The Mega Career Fair included local, state, national and international companies, providing positions no matter where they choose to settle in the long term.

“A lot of qualified personnel are getting out and wanting to stay in the area. Something we can offer is good stability in Belton,” Officer Jerry Torres, Belton Police Department, explained. “We have a good school district for those who have families.”

Torres said working as a police officer provides the same kind of comradery as the military, which is something a lot of Soldiers want to find in a career field.

“We’re serving the community,” Torres said. “We’re basically doing the same thing as when you’re in the military, but going from a larger scale to just a smaller community in which you live.”

Several employers were offering positions that matched Soldiers’ military occupation specialty. A few employers had a list of credentials that align with the skills necessary for a specific position. Soldiers can receive credentials at the Fort Hood Soldier Development Center. Soldiers can put that kind of information to good use and seek the credentials needed to earn the position they want.

Hernandez said he believes the turnout for the Mega Career Fair was good and hopes the Soldiers looking for jobs found their future career.

SFL-TAP provides numerous services to transitioning Soldiers, including resume workshops, financial stability workshops, executive-level workshops and more. They can also advise Soldiers on troop to career training fields, such as truck driver, vehicle mechanic, police department and other training programs offered to veterans. For more information about Fort Hood’s SFL-TAP, call 254-288-2227. SFL-TAP is located on the third floor of the Copeland Center, Bldg. 18010.

The next Mega Career Fair will be offered in June at Club Hood.