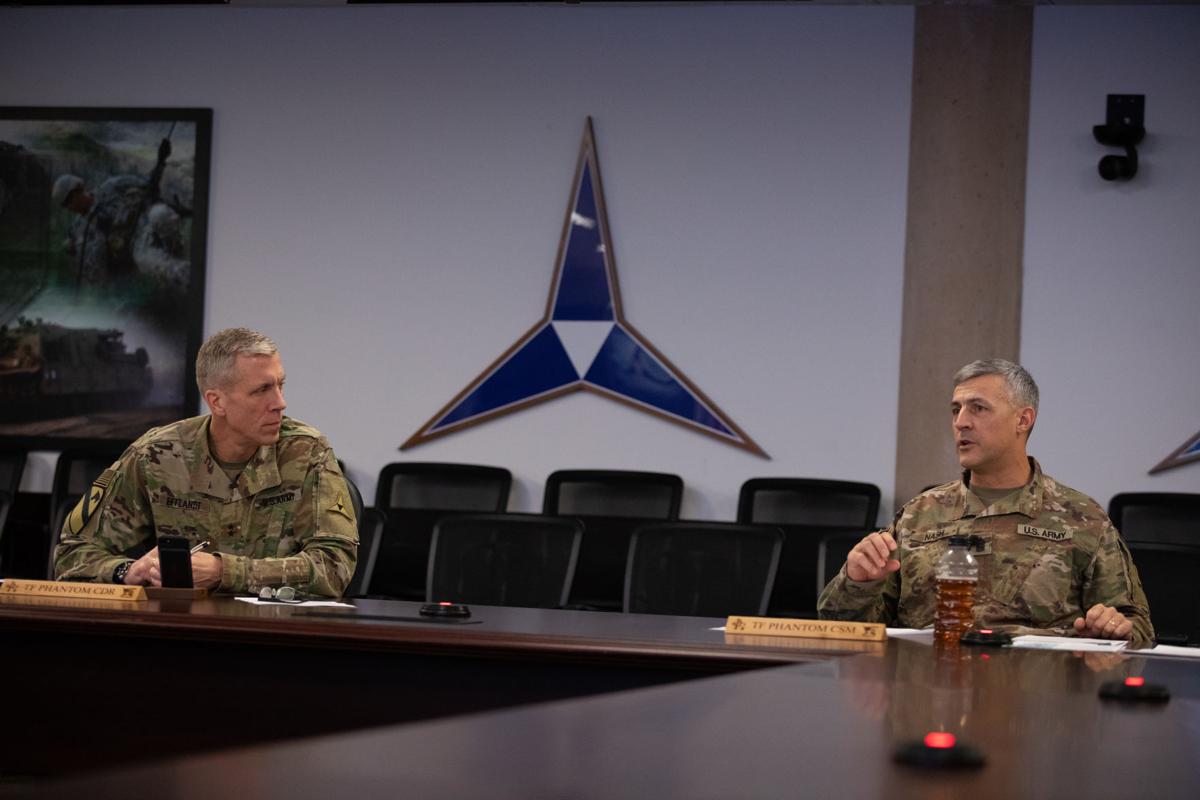 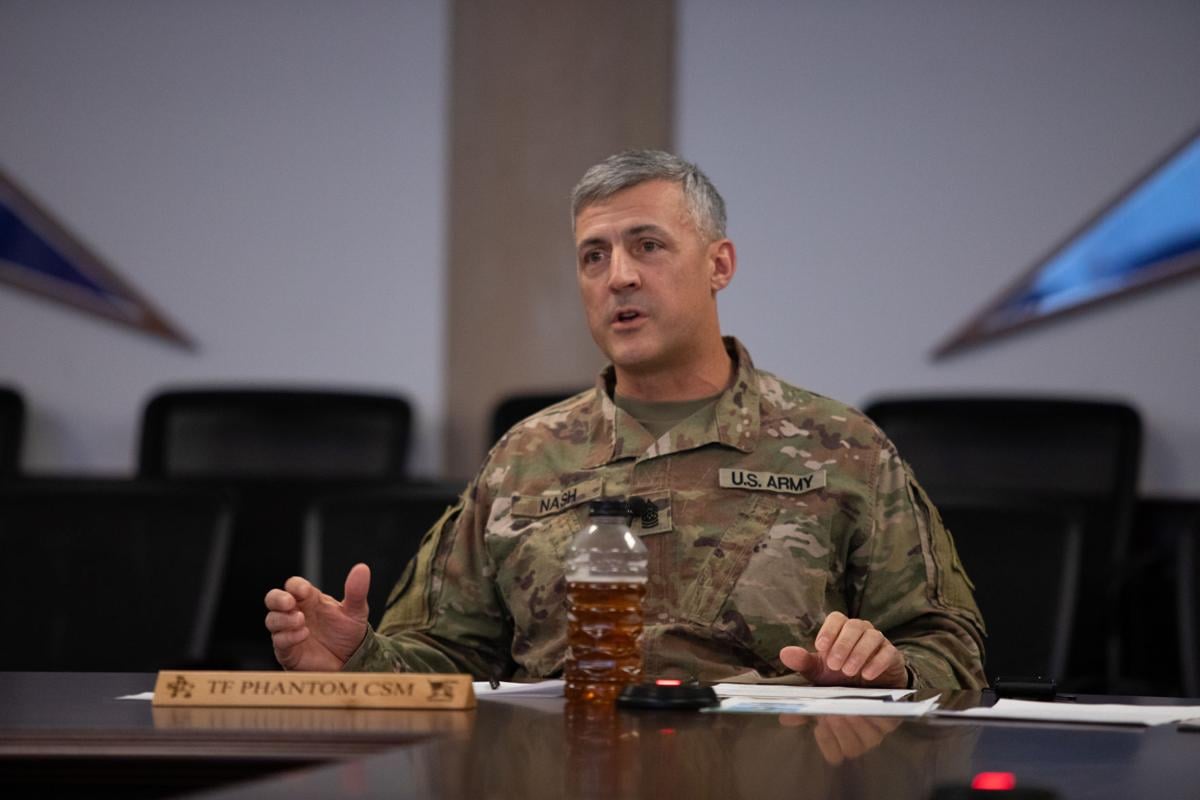 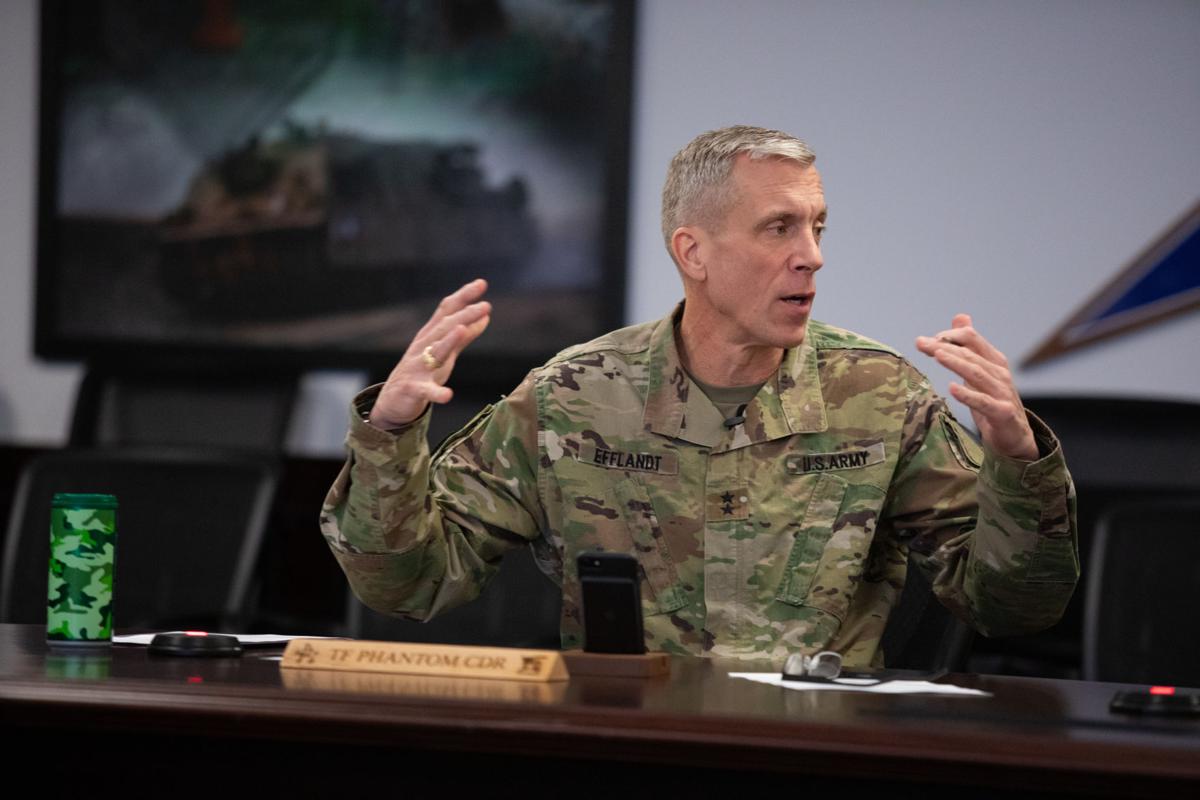 III Corps and Fort Hood Deputy Commanding General Maj. Gen. Scott Efflandt discusses a concern from a community member during a live-streamed virtual town hall on the installation’s Facebook page Tuesday. During the hour-long event, more than 140 questions were posed, along with 160-plus comments.

III Corps and Fort Hood Deputy Commanding General Maj. Gen. Scott Efflandt discusses a concern from a community member during a live-streamed virtual town hall on the installation’s Facebook page Tuesday. During the hour-long event, more than 140 questions were posed, along with 160-plus comments.

A message from the Secretary of Defense authorizing the use of face masks for uniformed service members, while in uniform, drew the most questions in the third virtual town hall event held by Fort Hood leaders Tuesday.

The Secretary of Defense’s message recommended, not required, the use of face masks when duties assigned could not assure six-foot social distancing.

“I know that the message that came out over the weekend from the Secretary of Defense is probably on a lot of people’s minds. He did issue a message authorizing Department of Defense service members to wear masks in public, in uniform, when their duties prevent proper social distancing,” Nash said. “From the corps’ standpoint, we’re still working through the implementation of this, but after listening to the Chief of Staff of the Army, the Sergeant Major of the Army and the Secretary of the Army’s town hall this morning, I do want to clarify a few things.

“This is directly from them that I’m going to echo. If you do fashion your own mask, such as balaclavas or neck gators, that’s an approved solution right now,” Nash added. “We also want to keep these face coverings ‘Army colors,’ meaning the colors within the uniform — the tans, the greens, the browns, the blacks.

“Please, don’t embellish or personalize your face covering,” Nash stressed. “Additionally, we want to prevent people from using old uniforms … as many of our military uniforms have been treated with (the insecticide) permethrin. That’s not something we want to be breathing in.”

During his opening remarks, Efflandt addressed a rumor that retirees and veterans had been denied access to services on the installation with the onset of the coronavirus.

“Retirees and veterans still have all the same access they had before the coronavirus forced us to change some of our operations,” the general said. “You can still come on post, use the commissary, PX and pharmacy. Some were thinking those services and facilities were only to be used by active duty Soldiers. That’s just wrong.”

“This new order clarifies that Soldiers can to go to parks, and go hunting and fishing, so long as proper social distancing is observed,” the general said.

The question and answer session followed. During the hour-long event, the command team took on 45 questions.

In all, more than 140 questions were posed, with more than 160 comments.

Besides numerous questions related to the wear of face masks, many people asked questions pertaining to pending permanent change of station orders, with the current stop movement order in place.

Efflandt noted that there have been very few exceptions to policy granted by the Army to date, but that those hardship cases — where household goods and the family vehicle has already been shipped — would be looked at as priorities moving forward.

The general lauded a comment from a Fort Hood community member named “Stephanie” near the end of the hour, who asked if excess, use or lose leave could be carried over due to the restrictions on travel.

“I will definitely look into it,” Efflandt said, noting that he would be looking into that same issue for those in the government civilian workforce caught in a similar situation.

There were several medical questions posed, which the III Corps and Fort Hood command team deferred to the Carl R. Darnall Army Medical Center’s live town hall event set for 2 p.m., April 9. In closing, the general thanked the community for tuning in, and thanked healthcare workers for their dedication to duty and care for the community.

“Success will come at the individual level, discipline and caring for each other,” the general said.

“Finally, wash your hands and practice social distancing,” Efflandt concluded. “We are in this together as the Fort Hood community.”