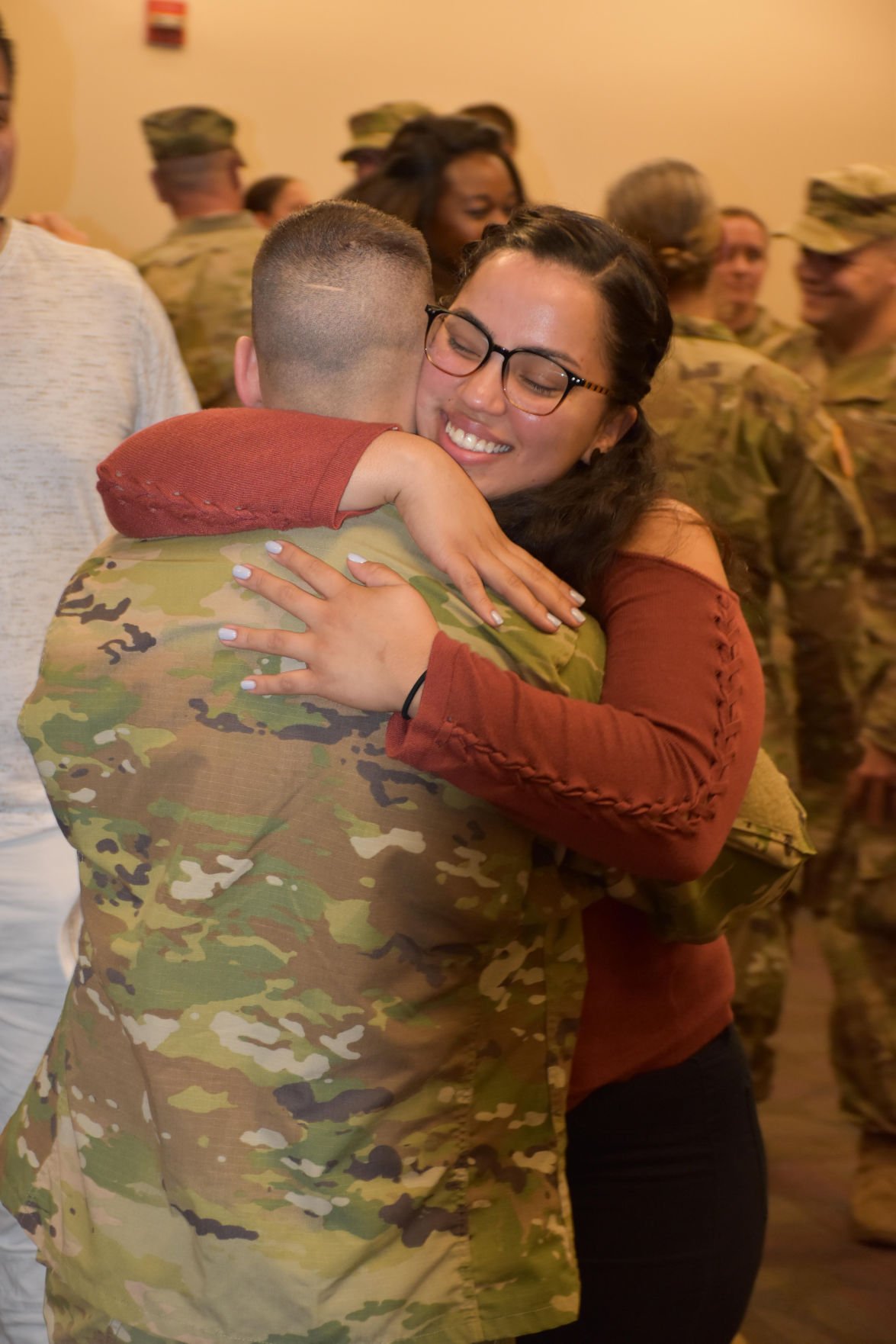 Jayme-Sky Pagan hugs her boyfriend, Spc. Aviv Bencanaan, at the conclusion of a homecoming ceremony for 28 troops from the 21st Combat Support Hospital Sunday morning. Pagan traveled halfway across the country, from Maryland, to be in Texas for Bencanaan’s return to the states following a 9-month stint in Kosovo. 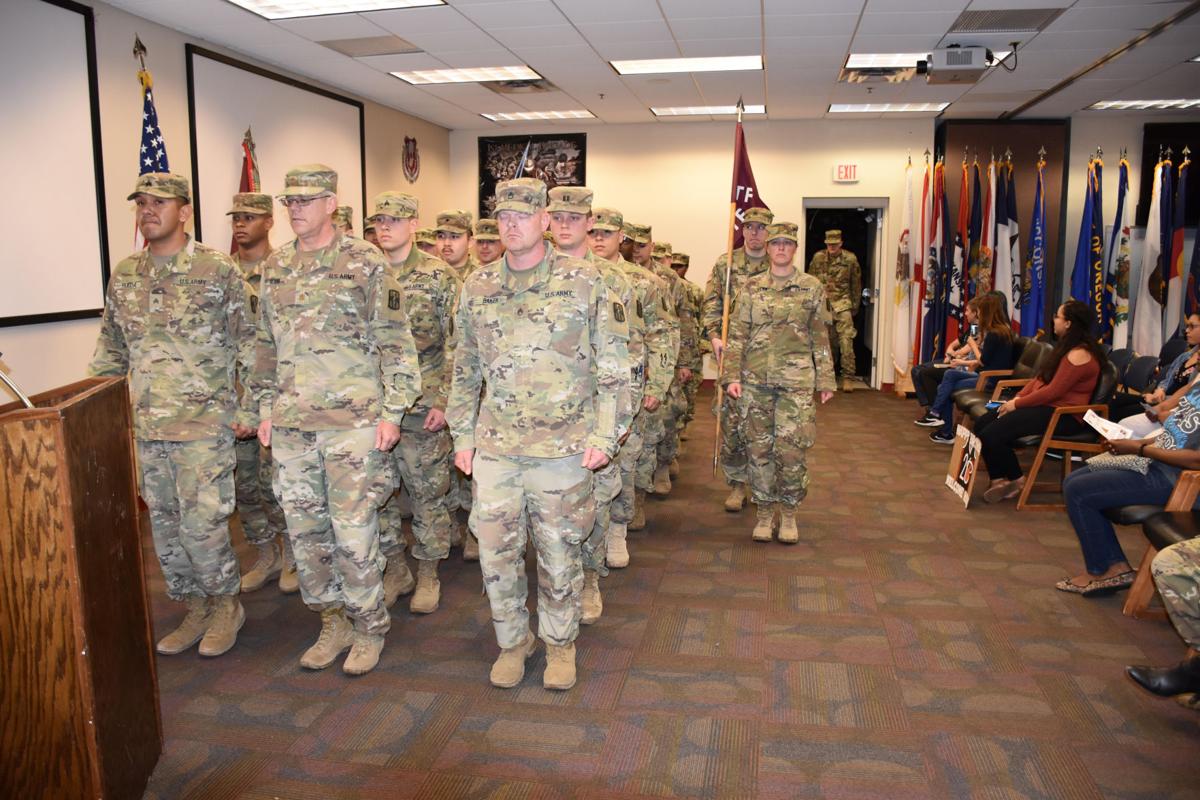 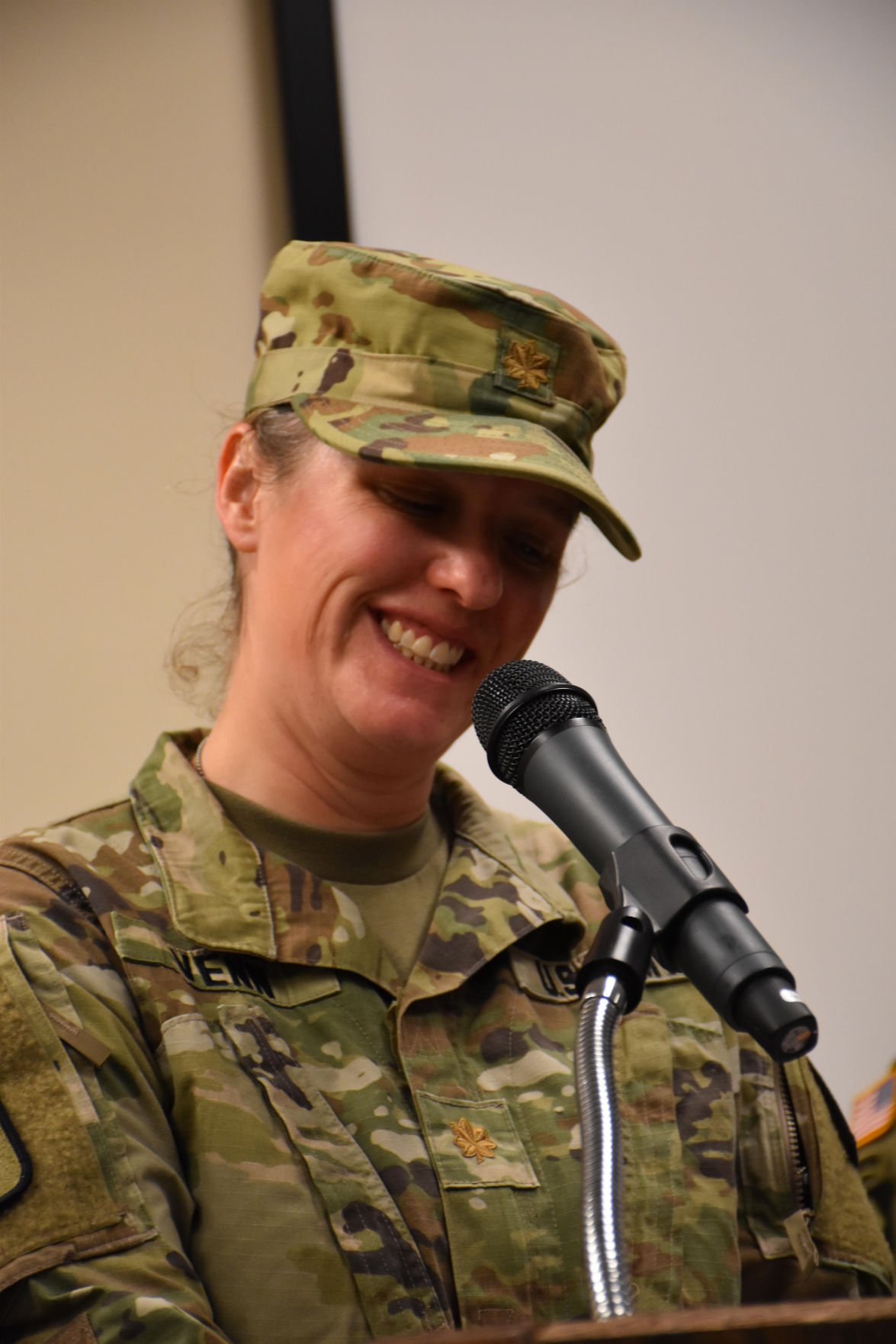 Jayme-Sky Pagan hugs her boyfriend, Spc. Aviv Bencanaan, at the conclusion of a homecoming ceremony for 28 troops from the 21st Combat Support Hospital Sunday morning. Pagan traveled halfway across the country, from Maryland, to be in Texas for Bencanaan’s return to the states following a 9-month stint in Kosovo.

Fort Hood homecoming ceremonies, like the installation itself, can be big.

Sunday morning, though, 28 Soldiers from the 21st Combat Support Hospital “Scorpions” returned to loved ones and their Central Texas home at a small ceremony inside the 1st Medical Brigade’s classroom.

Though tiny in comparison to many other redeployment ceremonies, the hugs from Family and friends proved just as emotional as any other homecoming at the Great Place.

Jayme-Sky Pagan came halfway across the country – from Towson, Maryland, where she attends Towson State University majoring the School of Deaf Studies – to be at the oh-dark-thirty start of the homecoming ceremony for her boyfriend, Spc. Aviv Bencanaan.

“He’s worth it,” she said as she awaited the bus to arrive from Robert Gray Army Airfield.

Olivia Miller met her husband, veterinarian Capt. Jarrod Miller, when the two of them attended the veterinary school at Auburn University. Married four-and-a-half years with three years in the Army, this was their first deployment. Olivia said instead of her husband heading home to Texas for mid-tour leave, she traveled to meet him in Europe. The pair met in Rome to see the sights.

Even with the exciting vacation in the middle of the deployment, Olivia said the extended separation was still tough.

“I mostly kept myself busy with work, and then I had some pretty good support with Family members and some friends in the area to help kind of keep me busy on the weekends and around the holidays where it got a little tougher,” she said. “Thankfully, for all the communications and social media and everything else we have, I was able to talk to him pretty much every day.”

Those hugs had to wait, though, for a brief ceremony.

Before releasing the troops to their Families, their commander lauded them on their accomplishments over the past nine months.

“Sometimes we are lucky enough in our lives to be part of something truly special, to be among a group of people who genuinely cares about and supports each other through thick and thin and who all work enthusiastically to reach a common goal,” Maj. Emilee Venn, the task force commander, said to those assembled for the short ceremony. “Ladies and gentlemen, standing before you this morning is just that – something truly special.”

Venn noted the numerous achievements of the Soldiers deployed under her command, including providing direct medical support to more than 1,200 U.S. and NATO service members in Multinational Brigade - East, as well as 4,000 troops throughout Kosovo. She said the providers, nurses and medics under her command conducted over 3,200 patient encounters; the preventive medicine team did more than 2,000 food, water and sanitation inspections; and the veterinarian team inspected more than $2 million worth of food to ensure its safety for consumption.

But beyond the numbers, Venn told her Soldiers how very proud they should be of this rotation.

“We can all look back on our time in Kosovo with a sense of pride and accomplishment,” she said, addressing her troops. “Each Scorpion left your mark on this mission.”

“One of the things that many people may not know about a medical brigade is that right now, we have 20 of our 40-plus units deployed at any given time,” Yarvis said. “I think the key word for this type of operation is interoperability. I mean, they integrated themselves not just for the U.S. forces on the ground, but provided support … (for) the NATO forces.”