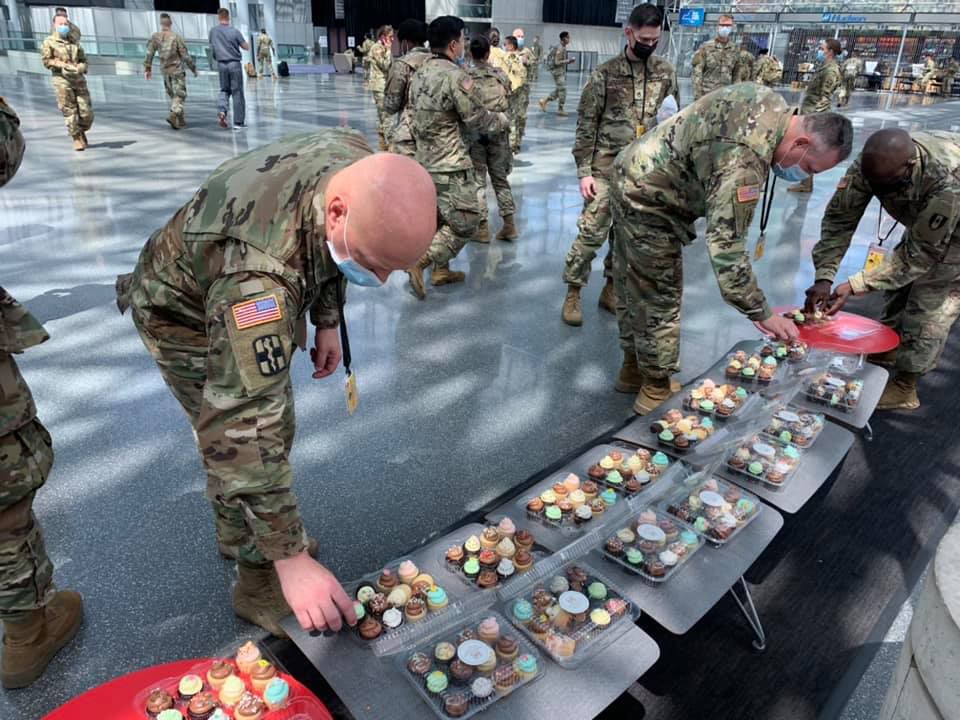 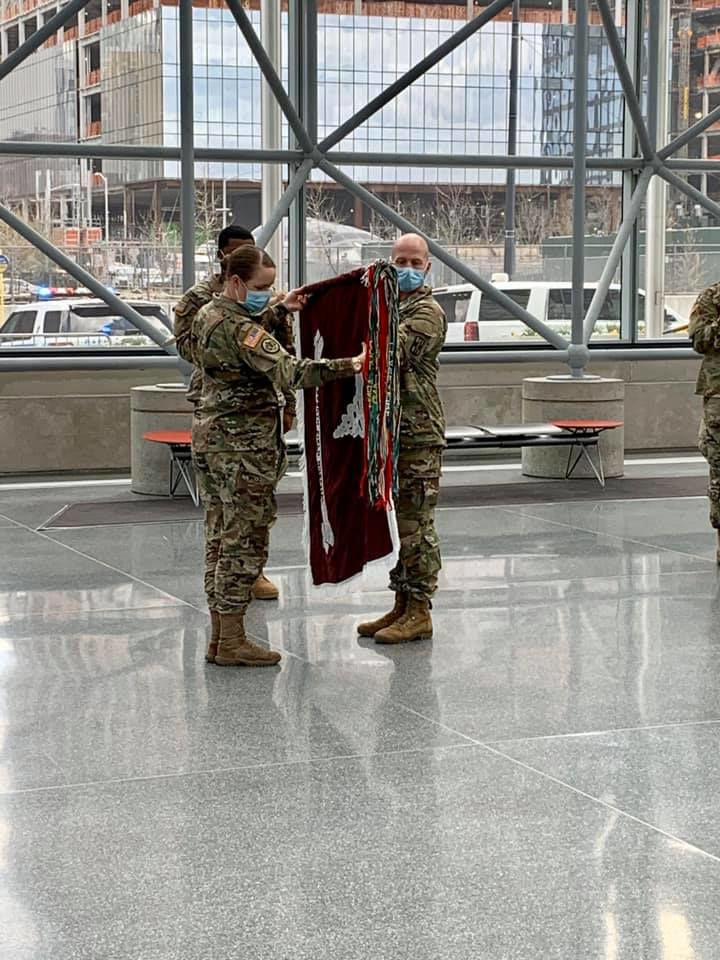 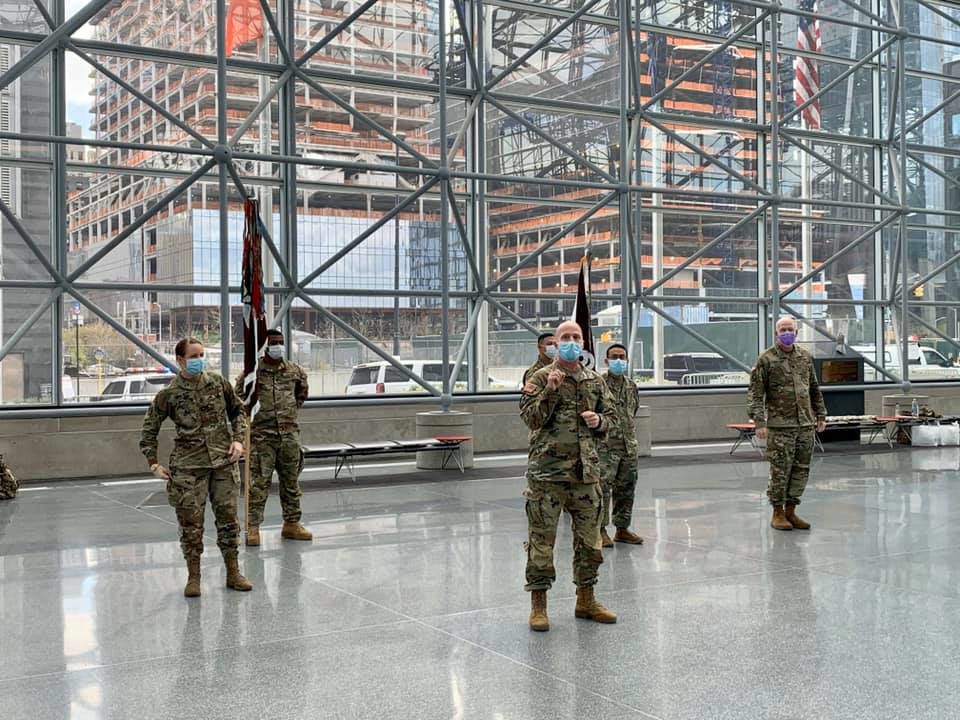 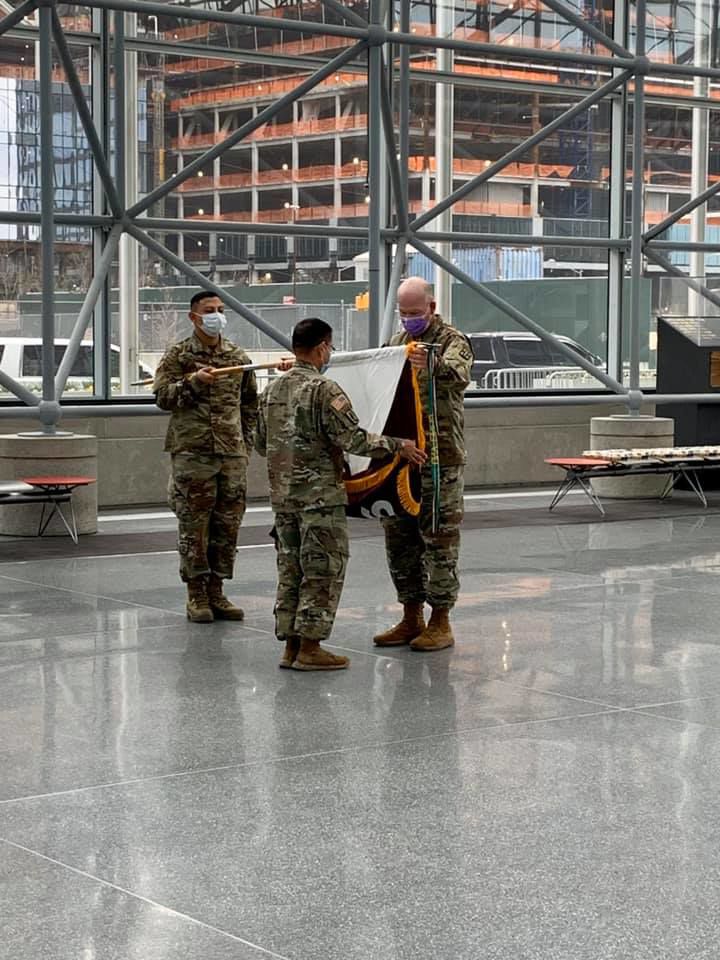 Celebrating one year since the 9th Hospital Center and 11th Field Hospital were organized, the units took a short break amidst saving lives at the Javits New York Medical Station to honor the milestone April 16.

The 1st Medical Brigade units are currently deployed to New York City to relieve the burden on the city’s healthcare system in its fight against COVID-19. They are part of a joint task force comprised of medical personnel from the Army, Navy, Air Force and United States Public Health Service, who converted the Jacob K. Javits Convention Center into the Javits New York Medical Station, with the space to accommodate 2,910 beds.

Surrounded by the camouflage patterns of all the branches, along with civilians and healthcare professionals in scrubs, the units uncased their colors in the lobby of the Javits NYMS.

“The display of the colors signifies our presence here in New York, our ability to rapidly respond to a mission, and how far we have come,” Sgt. 1st Class Colin Wallace, 11th Field Hospital’s senior enlisted advisor, said, “from laying out equipment in a motor pool to now using that same equipment to keep fellow Americans alive while fighting this virus.”

She said she believes showing the Soldiers how far they have come in such a short time will remind them of all their successes, while encouraging them as the fight against COVID-19 continues.

“This shows a full circle timeline of why a successful conversion was so important and why we do what we do,” Wallace said.

The units were organized on April 16, 2019, following an Army-wide unit restructuring, which converted combat support hospitals into field hospitals. As the 9th Hospital Center and 11th Field Hospital uncased their colors for their first time, the colors of the 21st Combat Support Hospital were cased for the last time, ending its 77-year history.

The reconfiguration converted the 248-bed combat support hospital into a smaller, more modular field hospital, with the ability to augment its detachments to suit any need. Combat support hospitals were limited by their size, so the conversion to the field hospital granted far more flexibility for deployments, allowing them to deploy at a moment’s notice, which was put into use as they deployed to New York City expeditiously.

“Their response to the COVID-19 pandemic was remarkable considering the rapid response and capability requested. Within 24-hours of notice, they had a large advanced party in an aircraft heading to New York City to support the American people. In less than 7 days, they were establishing hospital operations out of the Javits Center,” Col. Robert Howe II, 1st Med. Bde. commander, said. “Incredibly proud of what they did in such a short time and the support they continue to provide the people of New York.”

Wallace said she is incredibly proud of her Soldiers, who conducted large-scale inventories and redistribution of entire sets of medical equipment, established new processes, completed a validation process, conducted a successful NTC rotation and conducted a facility move to consolidate 9th Hospital Center and 11th Field Hospital into one building.

During that same time, the units hosted an Expert Field Medical Badge qualification, a joint Surgical Exercise, Army Warrior Task brigade-level field training, converted to the Army Combat Fitness Test, and celebrated many promotions, graduations and other career milestones, which Wallace said is very telling of the caliber of Soldiers within the two units.

Since every birthday needs cake, the Soldiers were treated to mini-cupcakes from New York City’s famous Magnolia Bakery. Wallace said the cupcakes tasted homemade, which the Soldiers appreciated while they’re far from home.

Although Howe and Command Sgt. Maj. Robert Jackson, senior enlisted advisor of 1st Med. Bde., were conducting a medical site assessment in Chicago, Howe said they were still able to watch the celebration via modern technology. He said Col. Kim Aiello, commander of the 44th Medical Brigade and the joint medical task force, FaceTimed them so they could watch the event live, which made him feel proud of all their accomplishments in this first year.

“Their faithful and tireless efforts will undoubtedly save lives,” Howe concluded, “and we are incredibly proud of all our Silver Knights selflessly supporting our homeland.”