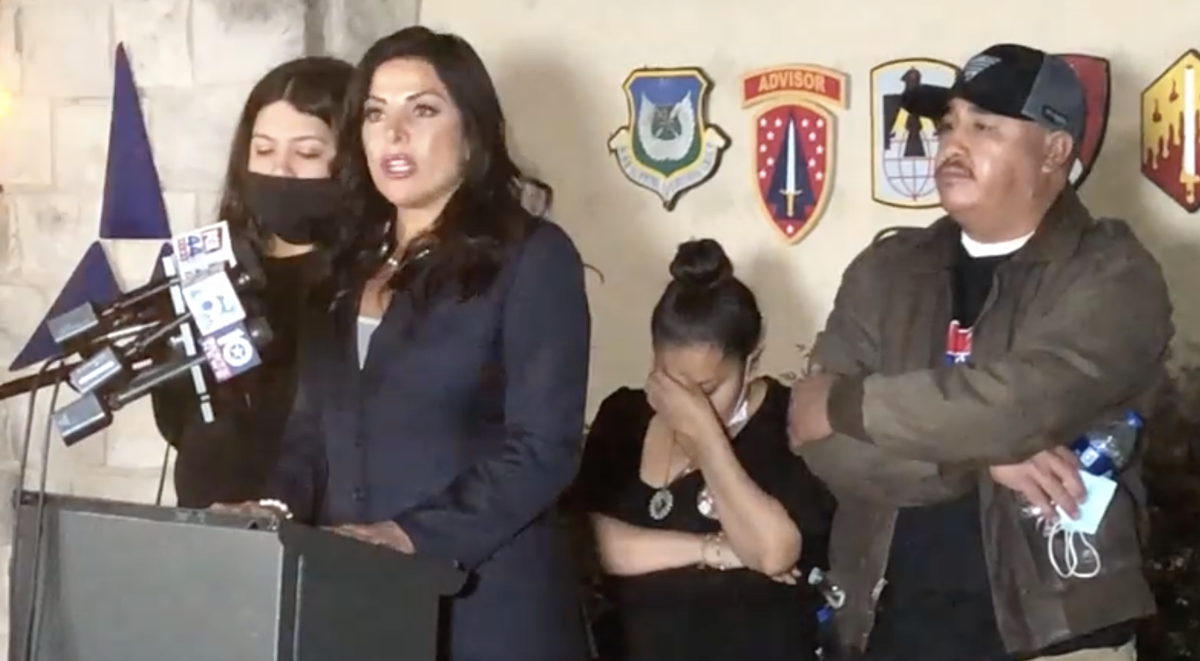 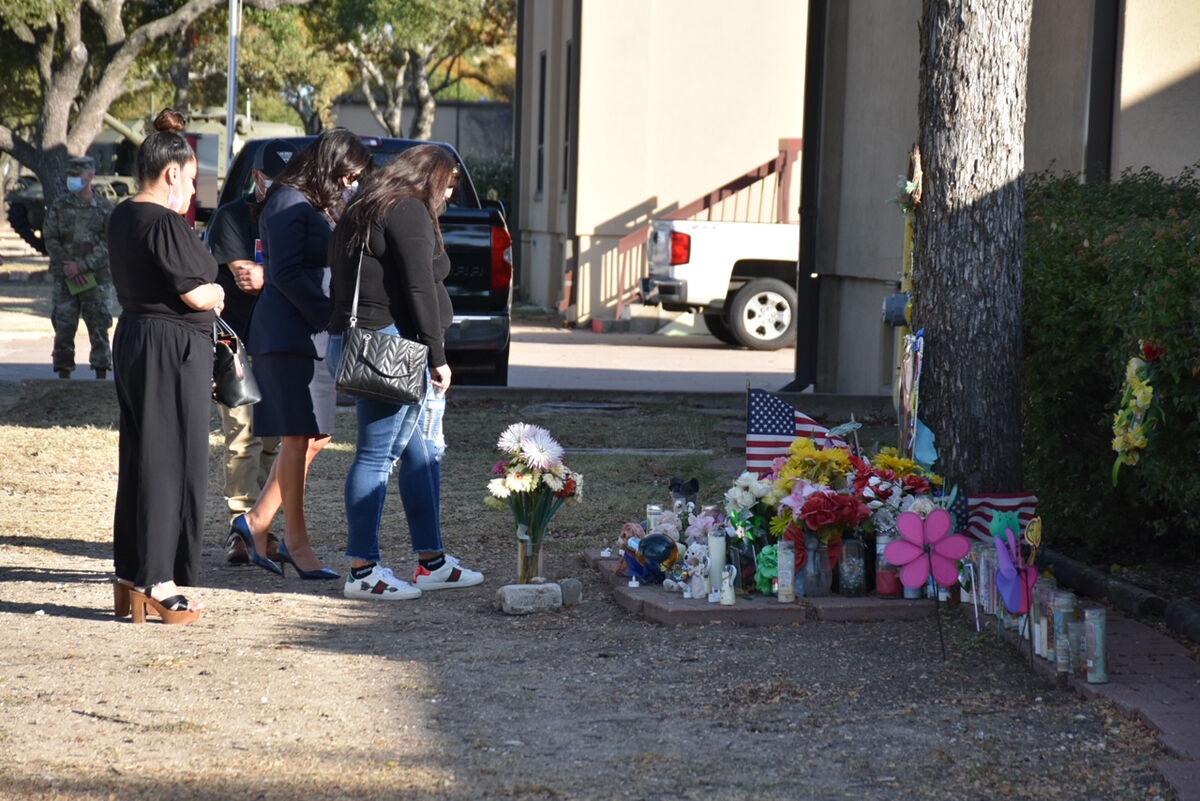 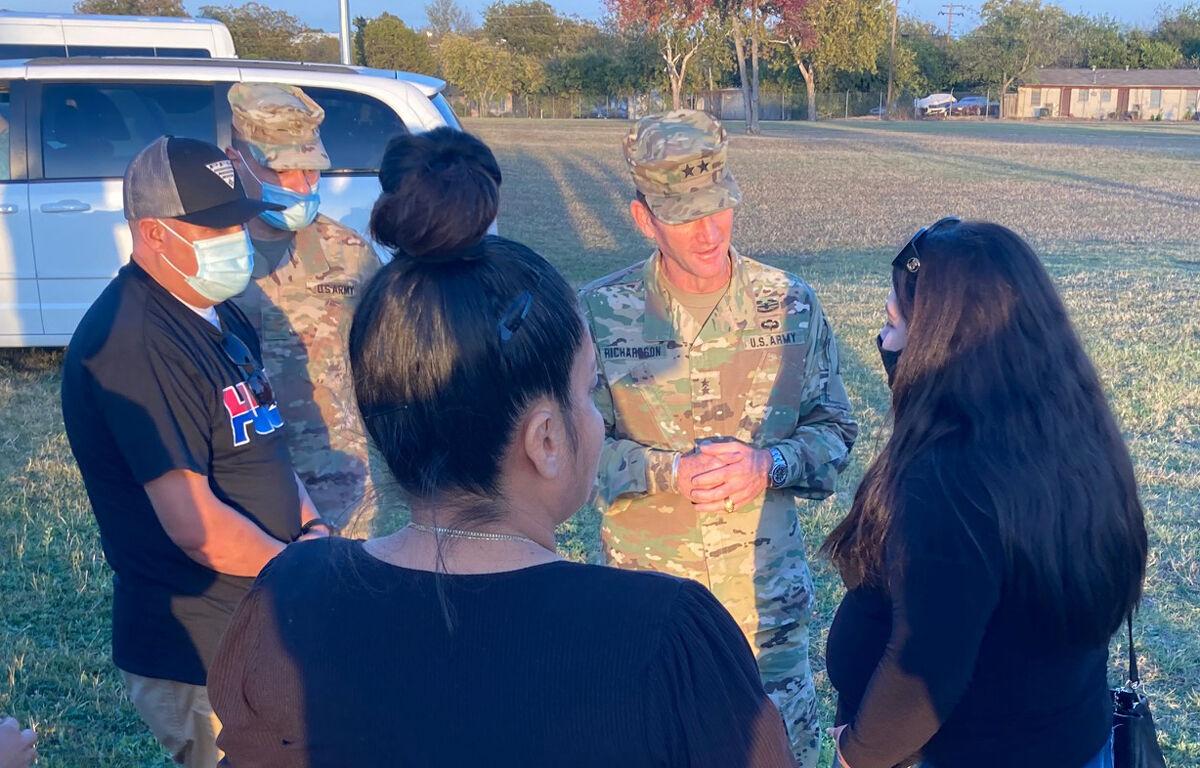 Maj. Gen. John Richardson IV, III Corps and Fort Hood deputy commander, speaks with the Guillen family at the newly-designated memorial gate, across the street from the vigil site and mural.

Maj. Gen. John Richardson IV, III Corps and Fort Hood deputy commander, speaks with the Guillen family at the newly-designated memorial gate, across the street from the vigil site and mural.

“Today, we invited Specialist Vanessa Guillen’s family to visit Fort Hood as we take an important step together to memorialize Vanessa’s life and service to our nation,” White said in a statement released to the media and on social media while the family was visiting the installation.

“One of the reasons we invited the Guillen family today was to discuss and review design concepts and survey a proposed site of a gate we plan to name in Vanessa’s honor,” White said. “Their input is important for our final design that will come to fruition over the next few months.”

The gate designated to be named after Guillen, which provides northbound access to the installation from the intersection of Rancier Avenue and Fort Hood Street in Killeen, leads to the 3rd Cav. Regt. area where she served.

“The gate is accessed by thousands of Soldiers, civilians and families every day,” the general noted. “A memorial gate in honor of Vanessa – a proud Texan – will serve as a reminder to take care of each other and inspire the next generation of Soldiers and the surrounding community.”

Following a meeting with White and other senior III Corps and Fort Hood leaders, the Guillen family was taken to the designated gate, which is across the street from the vigil site and mural painted in the slain Soldier’s honor.

After the visit, the Guillen family and their attorney, Natalie Khawam, held a press conference outside the installation’s main gate. In her opening remarks, the attorney characterized the meeting with Fort Hood leaders as “very pleasant, very compassionate.”

Most of all, Khawam said that while the Guillen family will never forget Vanessa’s loss, now is the time to forgive, and to work together for the betterment of all.

“Working together is the best way,” she said. “As Gloria Guillen told the generals today, … she prays to God, and what does God say? God says to forgive, right? We have to forgive, and we have to work together because all these Soldiers, they deserve a voice, they deserve protections.”

Vanessa’s sister Mayra told the assembled media that while her family still wants more answers about what happened on April 22, the day Vanessa died, they are appreciative of Fort Hood leaders reaching out to them and their plans to keep Guillen’s memory alive.

“This memorial that is going to be done to honor Vanessa means a lot to us,” Mayra said. “It means they listened, this new command did listen to us.”

In his Nov. 10 statement, the III Corps and Fort Hood commanding general noted that, “Vanessa’s life was a catalyst for us to implement action to improve trust, discipline and teamwork across our formations.”

That initiative, White said “… ensures Soldiers, families and civilians are always at the core of what we do. All of our 38,000 Soldiers at Fort Hood are important, and, like Specialist Guillen, each volunteered to serve our nation. They deserve our best leadership.”