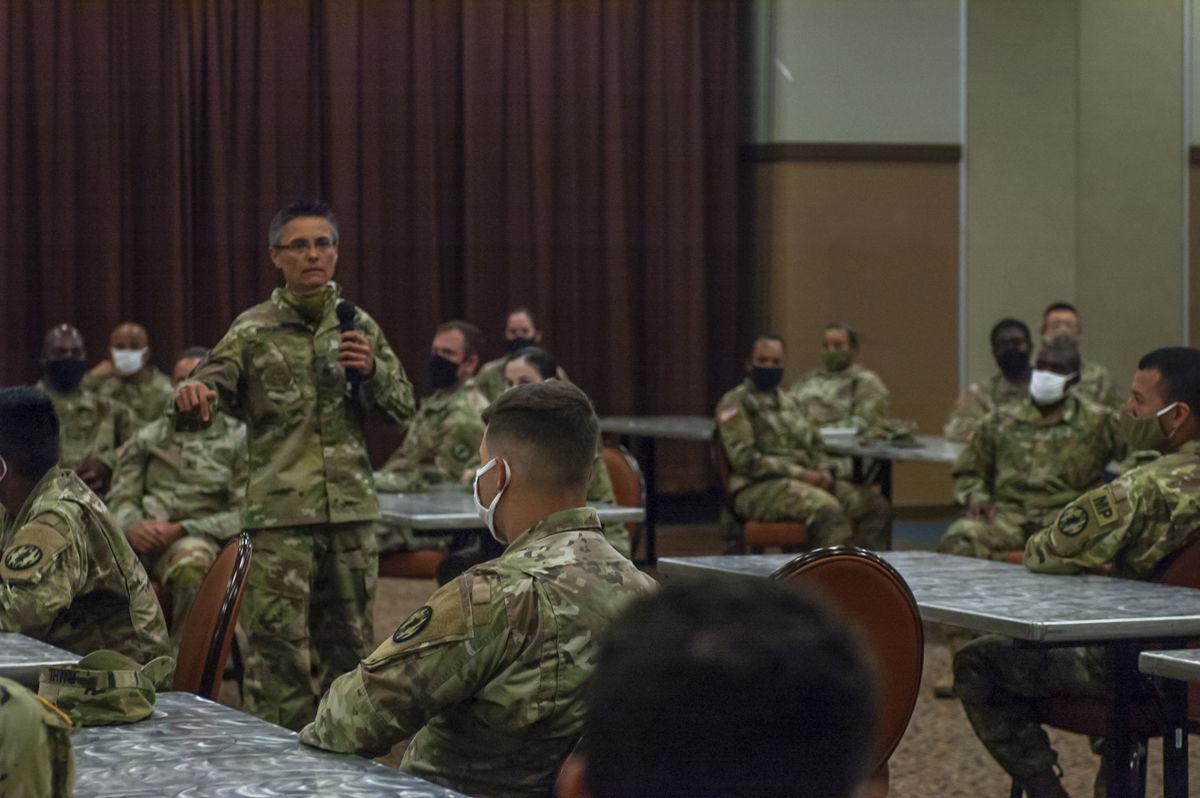 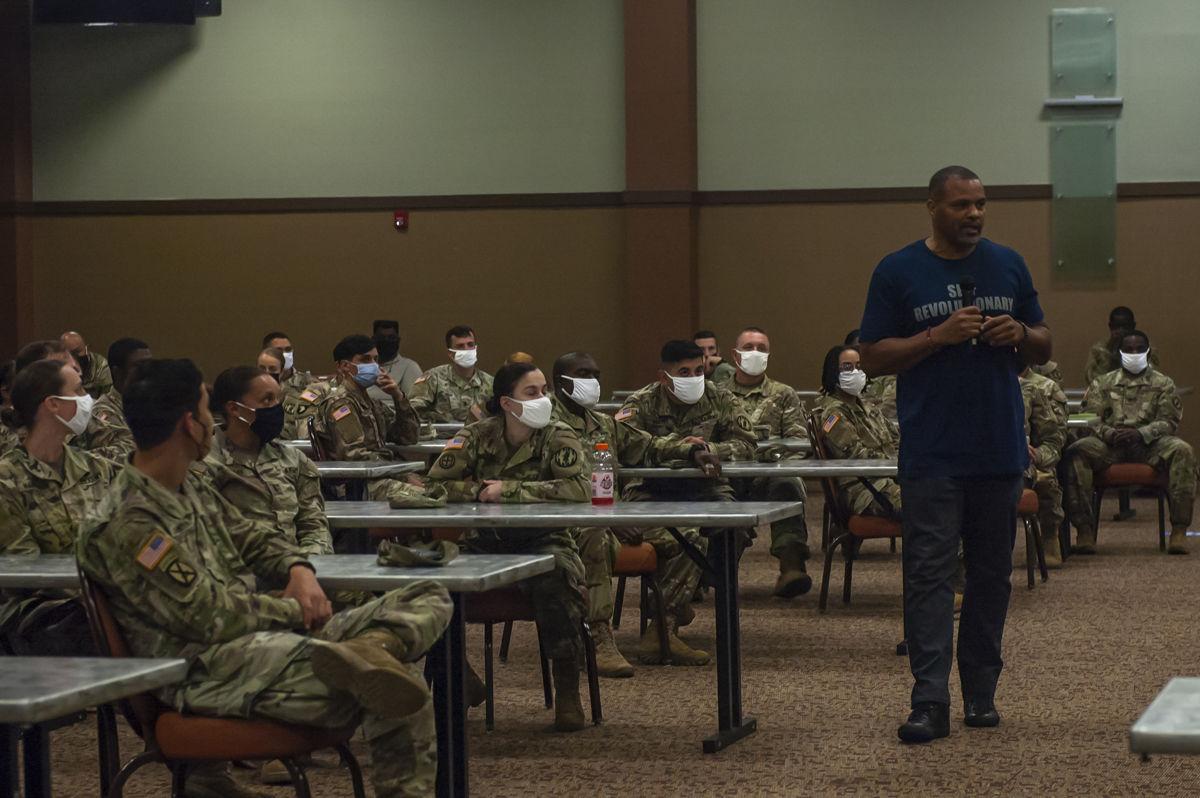 Dominique Waltower, a violence prevention advocate, addresses the Soldiers of the 89th MP Bde. during a SHARP Stand Down Day held at Fort Hood Community Events Center June 26. Waltower is a domestic violence survivor and former domestic violence offender who now uses his personal experience to teach others.

Dominique Waltower, a violence prevention advocate, addresses the Soldiers of the 89th MP Bde. during a SHARP Stand Down Day held at Fort Hood Community Events Center June 26. Waltower is a domestic violence survivor and former domestic violence offender who now uses his personal experience to teach others.

“Before we start, there’s something I need to say to you. I was an offender of domestic violence.”

Originally planned for April during Sexual Assault Awareness and Prevention Month, the training day was delayed due to concerns with the ongoing COVID-19 outbreak. Dietra Woods, the brigade victim advocate for 89th MP Bde., said that planning for social distancing was an important concern.

“With the current situation, nothing was certain, but we were glad we were able to hold this educational day safely,” Woods said. “Everyone except for the speaker is wearing a mask and we held two sessions so that everyone had six feet between chairs for social distancing.”

Woods continued by explaining the choice to focus on domestic violence, a choice she said was made Col. Richard Ball, the 89th MP Bde.’s commander.

“We provided Ball with a list of multiple potential speakers, and he kept coming back to Waltower and saying, ‘I want domestic violence to be the topic,’” Dietra Woods explained. “He knows that as military policemen, our Soldiers have to handle domestic violence cases and you may even be carrying some triggering behaviors without knowing it. We need to understand where the behavior comes from to fix it.”

“Military police often operate in high stress environments, which can trigger domestic violence,” Waltower elaborated. “When you look at the numbers, 50% of homes where at least one member is in law enforcement will experience some form of domestic violence.”

It was explained that this can start because of small stressors that build up over time, which often go unnoticed. Recognizing and addressing these issues can help prevent incidents before they occur, he continued.

“When I’m working with someone, I say, ‘So, what I’m hearing is you love your wife, family, job, you love your kids ... any form of domestic violence is incompatible with that,’” Waltower said. “They can’t coexist. You have to pick one. No one likes that part of themselves, so once they see that the problem is coming from them, not from those other factors, that’s when they start to change.”

Understanding that the problem is coming from you can be a hard process, however.

“I remember violence being normal to me. I grew up in a home where violence could occur any day. When I grew up, I carried some of that with me. One day, I had shoved my girlfriend against a coffee table and gave her a huge bruise,” Waltower, admitted. “When I heard she called the cops, I didn’t understand why she would bother. This was just another disagreement. We had these all the time.”

Waltower said he was confused when he opened his door to find the police had actually shown up. He greeted them politely, and asked how he could help them.

“They said, ‘You’re under arrest for domestic violence,’ and I said, ‘Domestic ... what?’” he continued. “I remember sitting in the back of the police car after he explained what domestic violence was, and instead of trying to wrap my head around it, I was mad that my girlfriend wasn’t in the police car with me. She threw a clock at me, so wasn’t she just as guilty?”

For Waltower, the process towards understanding took a long time and a great deal of introspection. After getting married and having children, the effects of his violent tendencies started to erode his relationships with those he cared for most.

“I was pressured by my wife to try everything,” Waltower continued. “I tried counseling, church, family events, but I didn’t really want to go. I kept thinking that it was something else that made me act this way. It didn’t come from inside me.”

He said an important step toward acknowledging your own shortcomings can come from examining how your actions are affecting those around you.

“My son, Dante, he helped bring me back to reality,” Waltower said. “One day, when my wife and I were fighting, a note got slid under the door. It said ‘My heart hurts.’ This was my five year old, and he was telling me this because I was harming him. If you’re a parent, you have to understand that your kids know what’s happening, even if they’re not in the same room.”

Waltower said it wasn’t until after divorce proceedings started that he realized that the reason all his relationships were deteriorating was because of his actions. Through three long years of counseling, he was able to overcome his violent tendencies and rebuild his relationship with his children, ex-wife and become a violence prevention advocate to help those with similar problems overcome them.

“Once I saw the value in learning about myself, I finally opened up to counseling,” Waltower explained. “If you’re trying to prepare one of your Soldiers for therapy, you need to show them the value, the change it can have on their life, otherwise it won’t help.”

Woods said that it was important during this time to remind Soldiers of the support available to them, including the Fort Hood 24/7 SHARP Hotline, which is capable of providing help to those who need it most even during a quarantine.

“We need our Soldiers to know that they can get the help they need,” Woods explained. “Even if you may not be able to meet with an advocate face-to-face at this moment due to a personal situation, we still want to support our Soldiers in any way possible.”