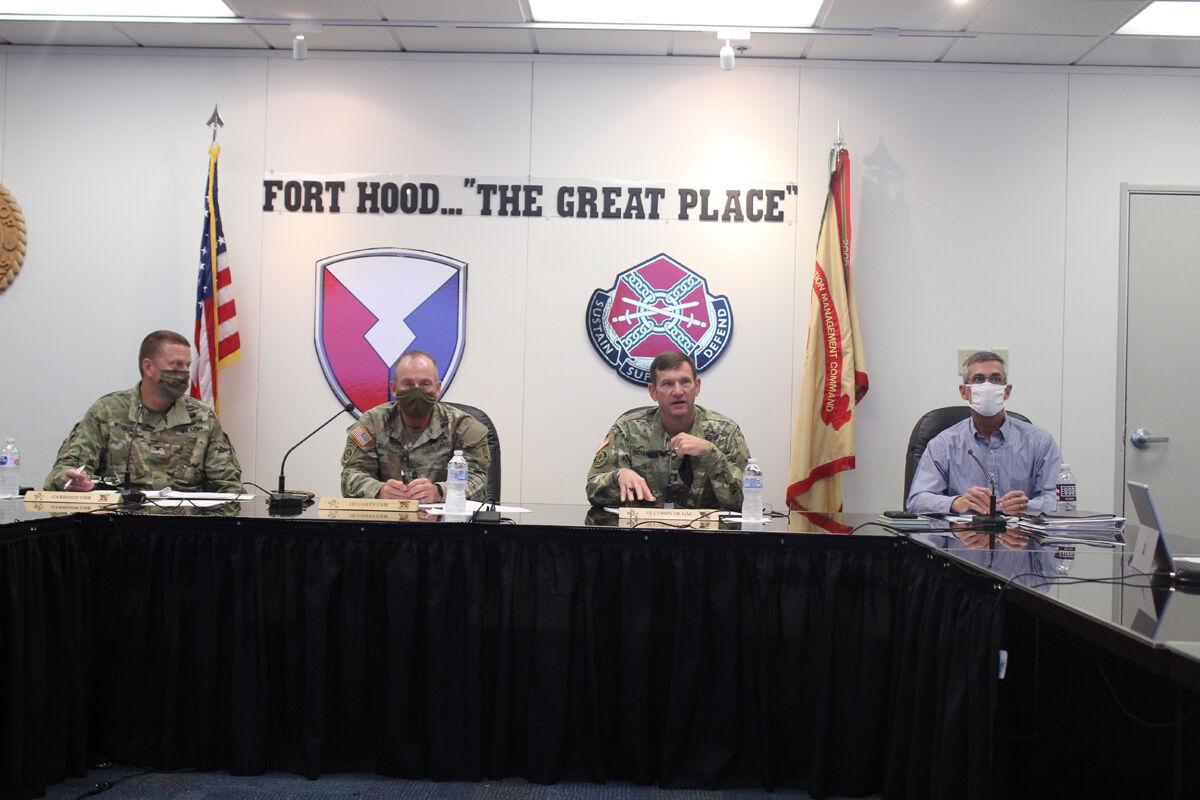 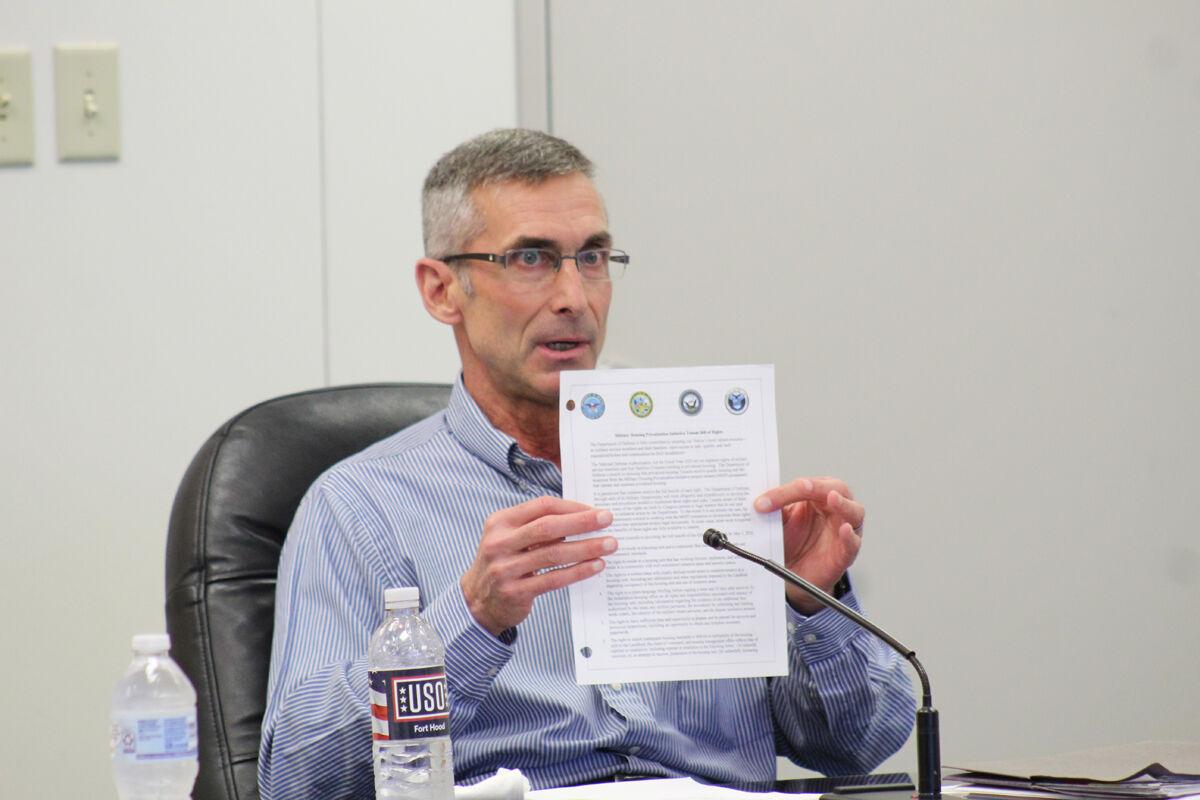 Brian Dosa, Directorate of Public Works director, holds up a copy of the Tenant Bill of Rights and Responsibilities, which were approved by the DoD on Feb. 25. Inputs from close to 200,000 military households worldwide were included.

Brian Dosa, Directorate of Public Works director, holds up a copy of the Tenant Bill of Rights and Responsibilities, which were approved by the DoD on Feb. 25. Inputs from close to 200,000 military households worldwide were included.

Residents were asked to submit their questions regarding Fort Hood Family Housing, which is operated by Lendlease Incorporated, ahead of time. Col. Jason Wesbrock, commander of U.S. Army Garrison – Fort Hood, explained that many of the questions were asked about the same things, so they combined like questions to save time and avoid repeating the same information several times.

Before answering questions, Brian Dosa, Directorate of Public Works director, outlined the Tenant Bill of Rights, which was approved by the Department of Defense Feb. 25. The bill of rights includes inputs from close to 200,000 military households worldwide. The document includes 15 rights and five tenant responsibilities. The bill of rights can be found at https://winnmilitary.entrata.com/media_library/12710/5e5924d8033ae4.75107936408.pdf.

Chris Albus, project manager for FHFH, announced they have begun an 18-month project that will include the replacement of roughly 1,000 roofs and 1,500 energy-efficient heating, ventilation and air conditioning units. He said the project, which began in July, will also conduct exterior repairs on 972 homes.

“A dedicated web page is also available on the Fort Hood Family Housing website for residents to view status updates, project maps and frequently asked questions,” Albus said. “As always, we are committed to providing safe and healthy homes where our families live, work and thrive.”

In response to a question about lawn care, Wesbrock said there are currently more than 200 households signed up to receive free lawn care for families of deployed Soldiers. He said deployed Soldiers can request the lawn care for their family, so they do not have to worry about the upkeep of the outside of the home. To be placed on the list, Soldiers should contact their community manager and provide them with a copy of their deployment orders.

Dosa was asked about the Self-Help Store, which has been delivering supplies to residents throughout the COVID pandemic. He said they have made more than 5,000 deliveries, with a 72-hour delivery timeframe. The DPW director said the Self-Help Store would be reopening Oct. 19 or 20. A detailed list of the items they have in stock can be found on the FHFH website, www.forthoodfh.com.

One of the biggest things they are currently working on in the barracks is installing doors on the interior rooms. Dosa explained that the new and renovated barracks were going through a pilot program to determine if removing interior doors would improve resiliency. He said Lt. Gen. Pat White, III Corps and Fort Hood commanding general, ordered the doors put back on. As of Oct. 8, Dosa said the renovated barracks now have doors and they have plans to install doors on the new barracks by the end of January.

Dosa also discussed the future of barracks on Fort Hood. He said the installation currently has 99 barracks, which houses 15,500 Soldiers. They are currently renovating 21 barracks, which will leave them with an additional 21 barracks still to renovate, a majority of which are hammerhead-style barracks.

“We recognize those barracks were built in the 1950s and are in dire need of renovation,” Dosa said.

He explained that the Army has what’s called the Army’s Facility Investment Plan, which made $375 million for renovations at Fort Hood. Under the same plan, they have more than $400 million which will go toward building seven new barracks to house an additional 3,000 Soldiers. Until then, Dosa reminded Soldiers to call the barracks work order line at 254-287-2113.

Maj. Gen. John Richardson IV, III Corps and Fort Hood deputy commanding general, reminded residents to contact their chain of command, so they can be proactive in fixing any problems in their home before problems are out of control.

“The one thing I’d ask everybody,” Command Sgt. Maj. Cliff Burgoyne Jr., command sergeant major of III Corps and Fort Hood, said, “is to be part of the solution.”