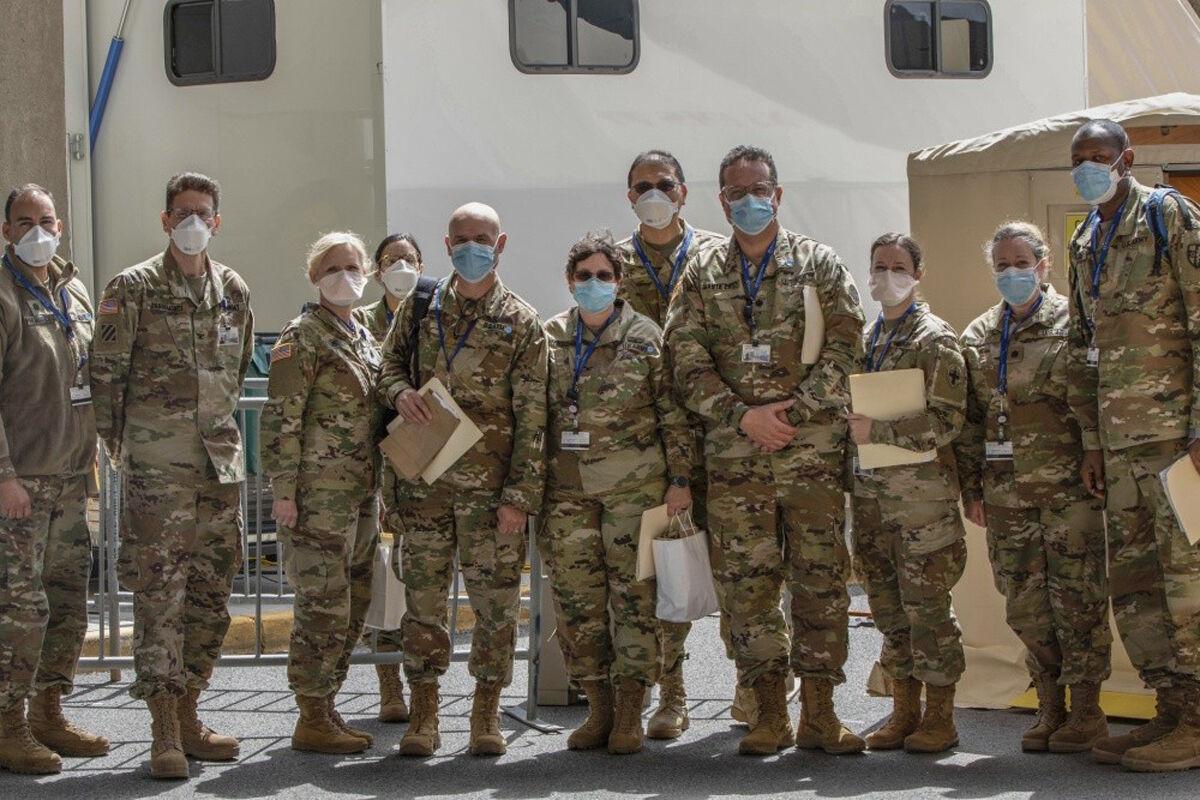 Soldiers with the UAMTF 332-1 pose for a photo at University Hospital, Newark, New Jersey, April 14. The unit was one of several medical task forces that is assisting the federal response to the COVID-19 pandemic. 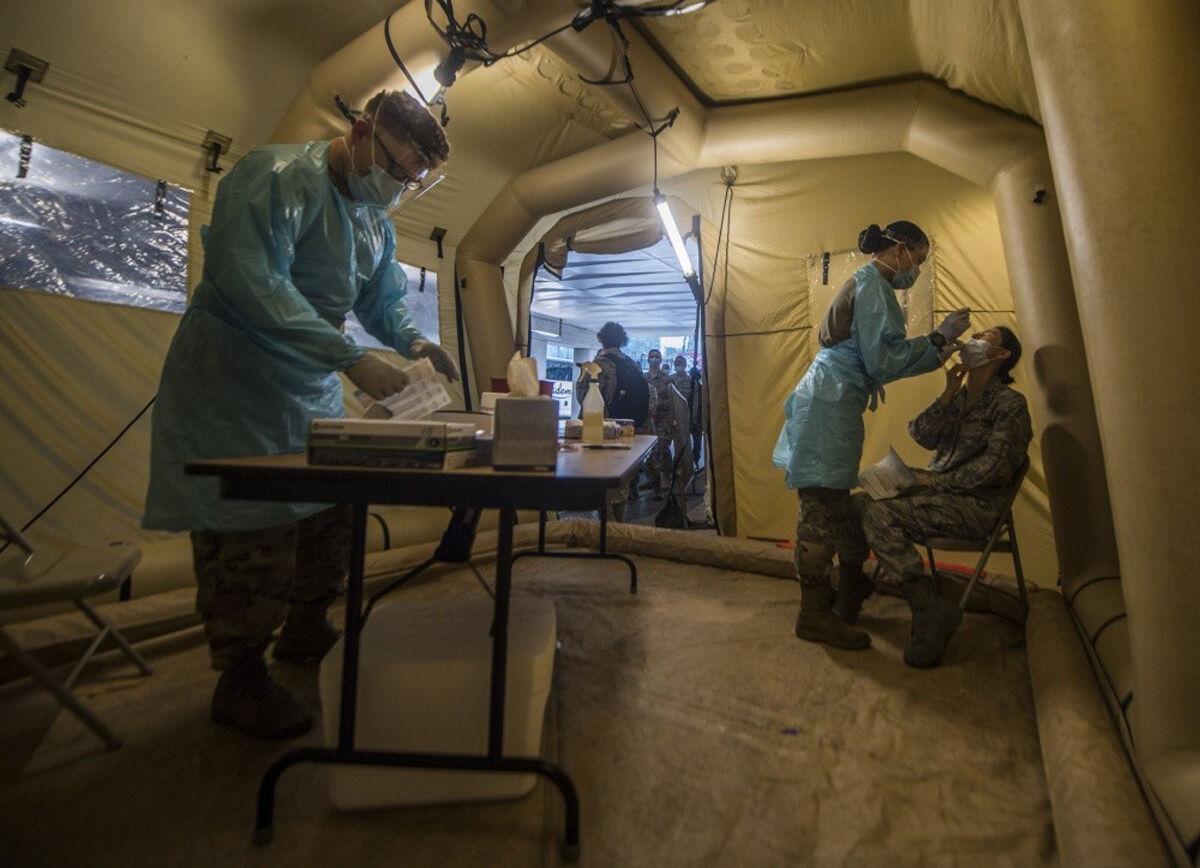 Soldiers with the UAMTF 332-1 pose for a photo at University Hospital, Newark, New Jersey, April 14. The unit was one of several medical task forces that is assisting the federal response to the COVID-19 pandemic.

WASHINGTON — It’s an invisible enemy. At least that’s how Soldiers felt about COVID-19 after their six-week stint at the overburdened University Hospital in Newark, New Jersey, where they said it was more like a warzone.

While there were no bombs or gunfire, the infectious disease still mounted attacks healthcare workers hurried to save lives.

“Our integration was seamless,” Maj. Erin Velazquez said following her unit’s warm reception by the hospital staff. “We were greeted with open arms, and we made sure to have the greatest impact possible in all areas (of the hospital).”

Velazquez commanded Urban Augmentation Medical Task Force 332-1, one of the Army Reserve’s 15 task forces that were initially sent to Newark and elsewhere to battle the disease. And now, as cases in the first locations subside, new hotspots have surfaced in southern and western states, with Soldiers preparing to assist again.

The 85-member task forces have critical care personnel who have rapidly deployed across the country, in what has become the largest domestic mobilization in Army Reserve history, they said.

Each team is made up of various medical specialties from doctors and nurses to supply and administrative support. At the height of its overall response in April, U.S. Northern Command had more than 9,000 military medical personnel, including those teams, in the fight.

‘At its breaking point’

Early in the pandemic, New Jersey became one of the country’s worst-hit states by the virus and is also where UAMTF 332-1, an arm of the 332nd Medical Brigade out of Nashville, Tennessee, called home for nearly six weeks.

By the time UAMTF 332-1 arrived on April 14, the Garden State had roughly 70,000 confirmed cases and more than 2,800 deaths. As with other COVID-19 breeding grounds, the exact tally was hard to count and growing by the hour.

It was spring, and the University Hospital in Newark “was at its breaking point,” Staff Sgt. Mauricio L. Pena, UAMTF 332-1’s top enlisted Soldier and a respiratory therapist, said. As cases surged, many hospitals had run out of beds to care for the sick.

“I was taken aback and saddened by the conditions in New Jersey,” he said during a media event Wednesday. “The emergency department was overwhelmed, even though the hospital (staff) was moving as fast as they could.”

The virus had outpaced their best efforts. The hospital’s emergency room was jam-packed with sick people, many of whom with coronavirus-like symptoms. The need for care didn’t slow down even if the hospital reached its capacity, so many patients were forced into the hallways of the emergency room.

“I knew at that moment we had to use our skill set and training to make a positive, impactful contribution,” Pena said, regarding the Reserve troops’ unique ability to combine military training with their civilian medical experience.

Upon arrival, the Soldiers in Newark also noticed that much of the undermanned staff were visibly burned out. The countless, long days at the hospital had worn them down, he said. “They were on the verge of collapsing.”

But with each passing day, things inched from chaotic back to stable. On May 20, the unit’s last day at University Hospital, the facility was running smoothly again, Velazquez said.

The cohesion between the Soldiers and hospital staff was immediate. They worked side-by-side to provide support to more than 100 COVID-19 positive patients daily.

Along the way, UAMTF 332-1 went on to assist all around the hospital. The task force didn’t only provide care to COVID-19 patients, but also helped give mental health support to the hospital staff, patients and other Soldiers, Velazquez said.

“This was an exceptional mission that provided our Soldiers with the opportunity to support our most burdened communities in a time of great need,” Velazquez said. “Many lives were not only saved but forever touched by the collaborative impact between the Department of Defense and state health care professionals.”

Ten miles from University Hospital across the Hudson River was the nation’s epicenter of the virus – New York City. That’s where the 44th Medical Brigade assumed the role of Task Force Silver Dragon, which oversaw more than 3,000 troops in medical units across six states as part of Federal Emergency Management Agency operations.

Despite daily interactions with COVID-19 patients, service members only had a 0.05% infection rate, Aiello said, adding not everyone was tested due to limited supplies.

“When we looked across the United States, (we) saw there were limited testing capabilities,” she said. “Therefore, we wanted to be good stewards of our nation’s resources, (so) we only (tested) those who were symptomatic for COVID-19.”

While normalcy returns to parts of the country, the battle against COVID-19 persists elsewhere. About 740 military medical and support personnel have been assigned this week to go to Texas and California in support of FEMA missions, U.S. Army North officials said in a news release Monday.

More troops are on prepare-to-deploy orders, according to Army officials, in case the demand for additional forces are needed in other hotbeds.

“COVID has not stopped. This is ongoing,” Aiello said. “We did a great job with what we knew at the time, and we learned from our partners on how to care for patients. They should all be extremely proud of what they accomplished during this historic mission.”