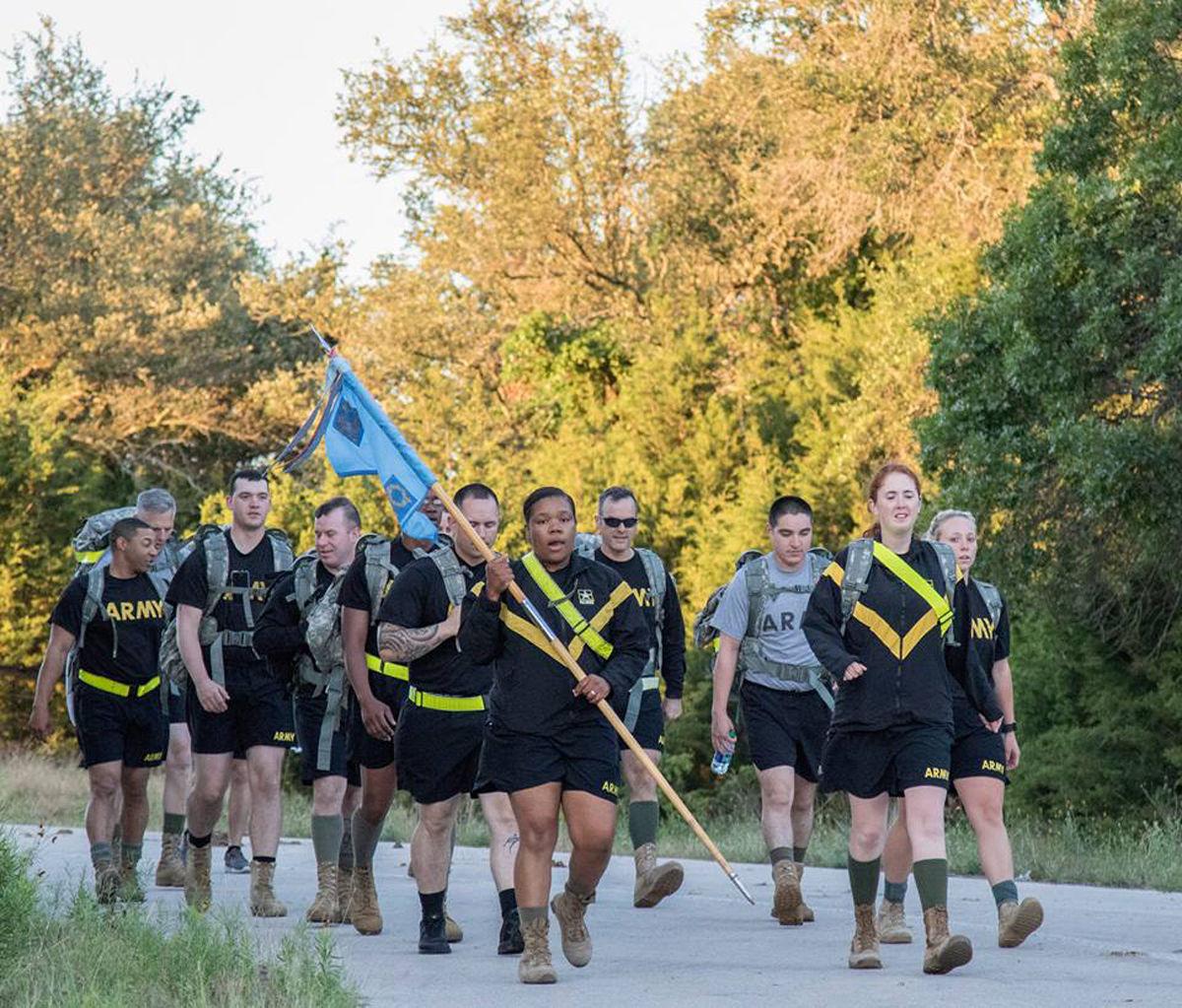 Soldiers of HHD, 163rd MI Bn., conduct the Carry the Load ruck march with name plates of Soldiers who have given the ultimate sacrifice attached to their rucks at West Fort Hood. 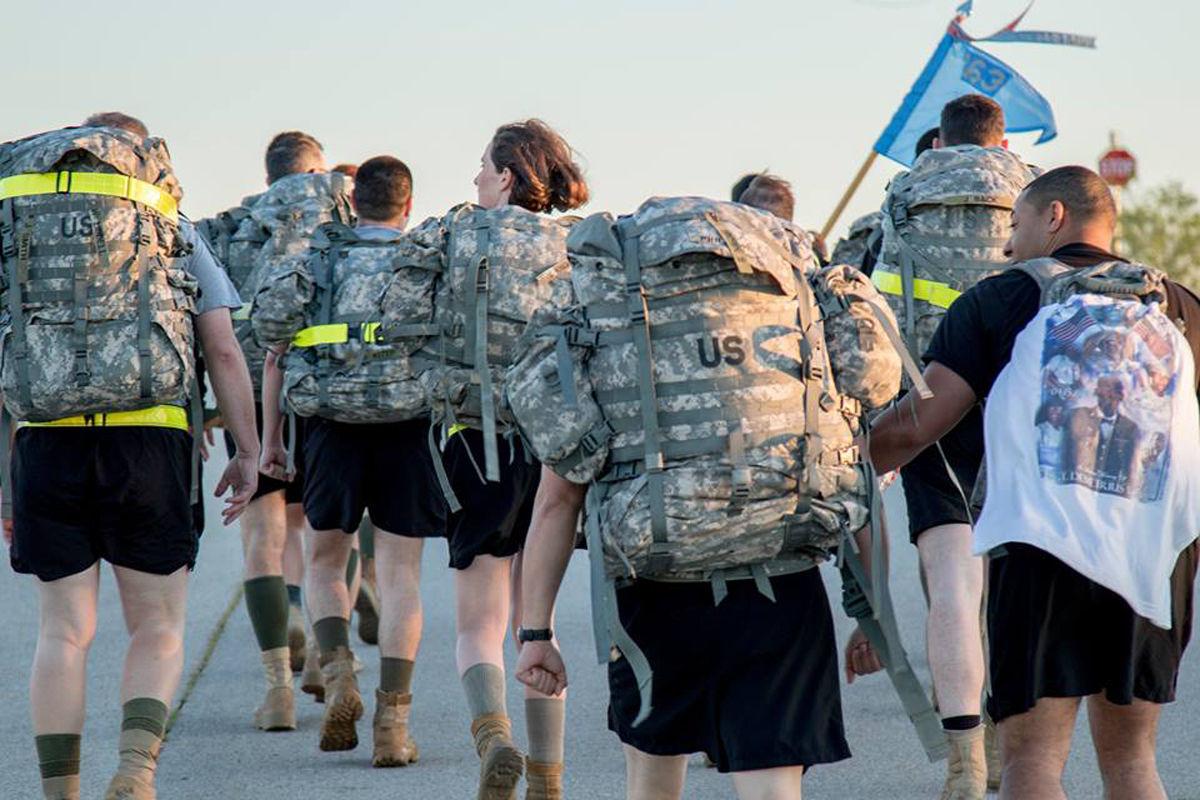 HHD, 163rd MI Battalion Soldiers carry the load for fallen service members and comrades as they ruck march around the West Fort Hood PT Track, May 24.

Soldiers of HHD, 163rd MI Bn., conduct the Carry the Load ruck march with name plates of Soldiers who have given the ultimate sacrifice attached to their rucks at West Fort Hood.

HHD, 163rd MI Battalion Soldiers carry the load for fallen service members and comrades as they ruck march around the West Fort Hood PT Track, May 24.

Memorial Day has historic and symbolic ties to all service members, whether through a personal loss of a brother- or sister-in-arms, or the ties that unite fallen service members with those currently in service or who previously served.

Spc. William Blaszyk, an HHD Soldier, said the event created a common bond among the detachment’s Soldiers, while also remembering those who died.

“This event enables us to come together and to bond with our current battles while reflecting on those we lost,” Blaszyk said. “Everyone should take some time out of their day, just to reflect on the sacrifices these men and women have made before us. They are a big reason we are where we are today.”

“I don’t have any Family in the military that passed away, but I know Soldiers who do,” Rowley said. “This is a great time to connect with them in remembrance of them.”

The Carry the Load ruck march was the detachment’s first experience doing this event and Rowley said remembering the importance of Memorial Day is key to the detachment.

She said that the day is all about those who were lost and is not a day to celebrate active military, but to remember and be thankful for those who are no longer here.

“We cannot forget our fallen,” she said.

Pfc. William Lockett, a paralegal for the 163rd MI Bn., has a Family history of military service and he carried the name of his uncle who once served as a combat medic and passed away on active duty.

“It is always good to look back on those who gave their lives for our country,” Lockett said.

Lockett really appreciated the idea of attaching a fallen service member’s name to the ruck as a symbol of tying the fallen individual to the Soldier carrying the name tape.

“This was a great cause,” Lockett said. “Having the name plates to reflect fallen service members is a way to honor them, who they were and what they fought and died for.”

Lockett said he wanted to share the nation’s necessity to remember that service members made a sacrifice to protect, defend and help others enjoy the freedoms we have.

Sgt. 1st Class Jonathan Risher, a platoon sergeant in HHD performed the ruck march with a T-shirt to cover his ruck. The shirt was mural of photos of Army Sgt. Demetrius Void, a fallen Soldier Risher previously served with.

“This day helps to remind us why we serve and who we serve for,” Risher said. “It provides a cause if you don’t have one, to fight for your brothers and sisters who aren’t here and no longer with us.”

Richer said the ruck march and the day of remembrance for the fallen is important not only to the unit, but the Army and other branches.

“Memorial Day gives a voice to the service members who have passed,” Risher. “That goes for the recently lost and those from the past, whether that be from Civil War to the World Wars.”

Command Sgt. Maj. Allen Brooks, senior enlisted advisor of the 163rd MI Bn., wanted to not only support his headquarters detachment in the ruck march, but to reflect and honor Memorial Day and what the day means.

“This day is an opportunity to remember the fallen – not only Soldiers, but police, firemen and first responders who have passed in the line of duty,” Brooks said.

Brooks said he was extremely pleased when he learned that the headquarters detachment coordinated the ruck march. Brooks highlighted three of the detachment’s Soldiers – Spc. Levi Francis, Pfc. Lisa Emmert and Pfc. Rowley – who facilitated the event and expressed why this was a positive experience.

“Events like this help to bring awareness not only amongst the military community but to the people we know in our personal lives,” Brooks said. “By showing and sharing events like this through media outlets, we can help assure that people understand the importance of Memorial Day.

“Memorial Day is a day to reminisce on all those we loved and have lost in service,” Brooks added.

The detachment had a total of 13 Soldiers participate in the Carry the Load ruck march.  The battalion seeks to continue the event in the future with intent to expand it next Memorial Day with name plates of more Soldiers.