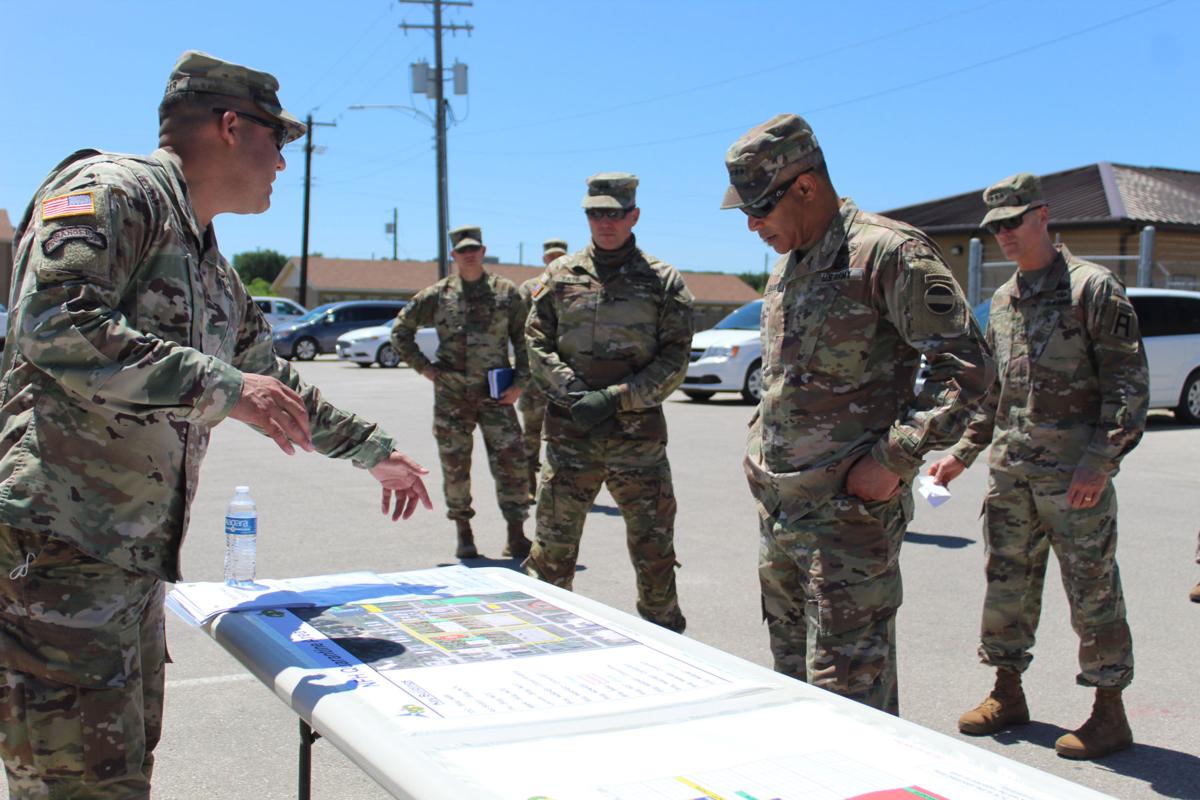 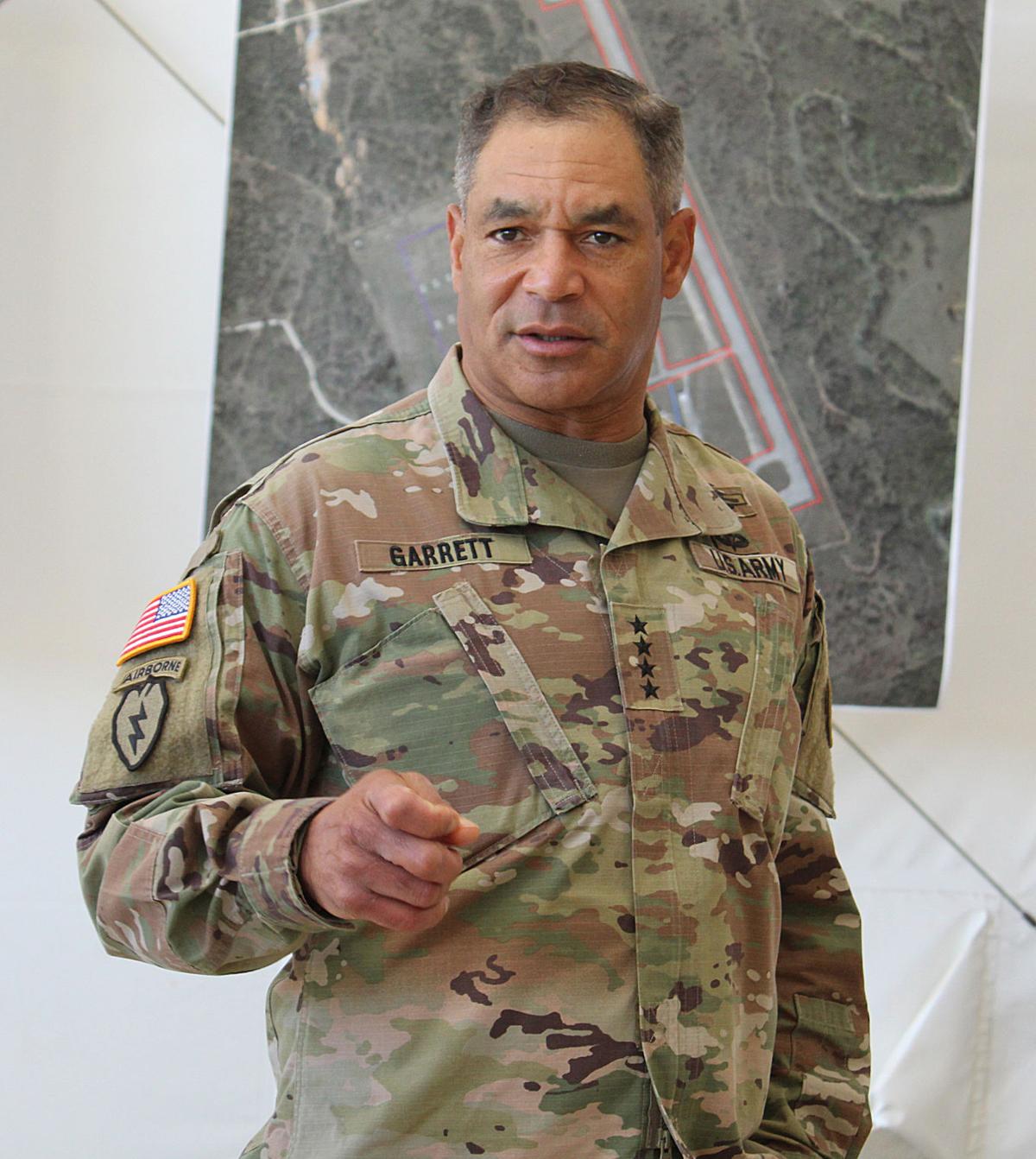 Gen. Michael X. Garrett, commander of FORSCOM, speak with personnel from the 166th Avn. Bde., April 30, after being briefed about the unit, its mission and how far the Longhorn Auxiliary Landing Strip has come in two years. 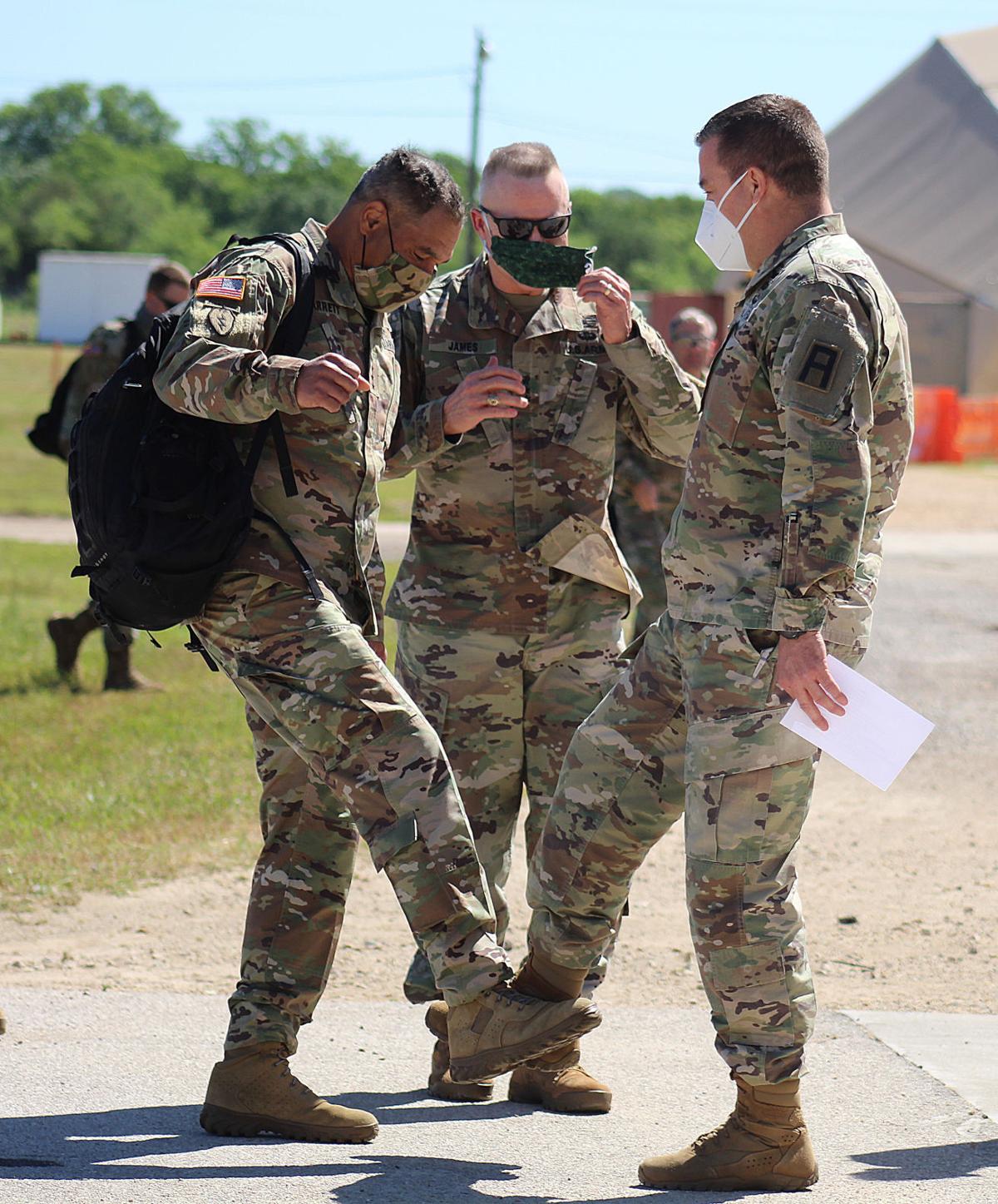 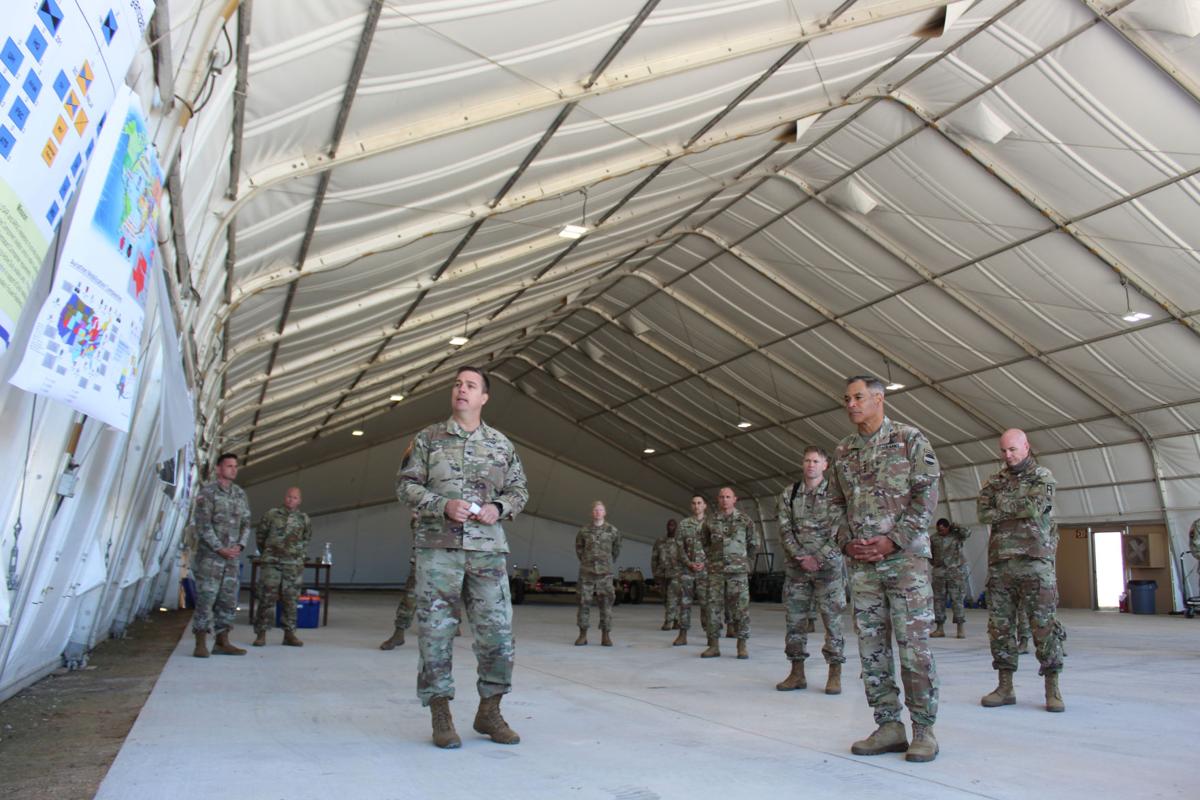 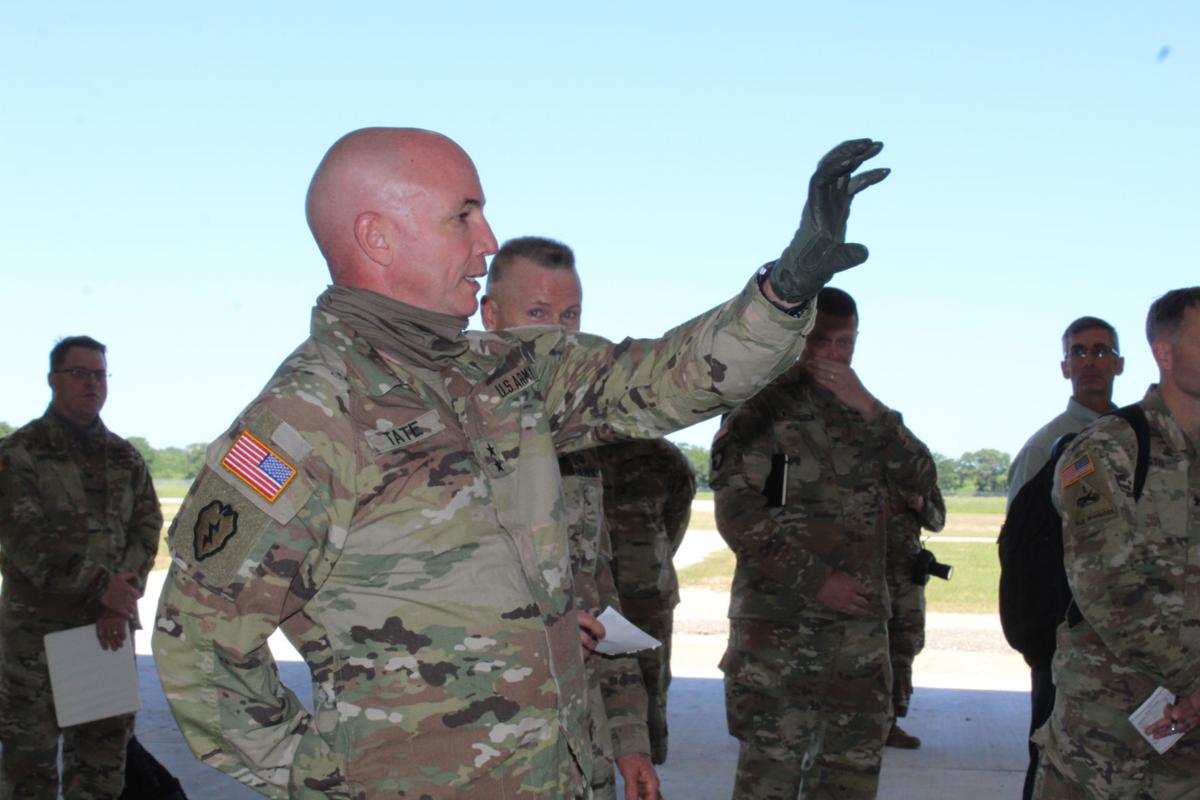 Gen. Michael X. Garrett, commander of FORSCOM, speak with personnel from the 166th Avn. Bde., April 30, after being briefed about the unit, its mission and how far the Longhorn Auxiliary Landing Strip has come in two years.

As Gen. Michael Garrett, commander of U.S. Army Forces Command, took a tour of the training being conducted at North Fort Hood, April 30, Soldiers from First Army – Division West and U.S. Army Garrison – Fort Hood had the opportunity to showcase all the hard work it takes to mobilize and demobilize forces out of the installation.

After National Guard and Reserve components are tasked for deployment, they are sent to North Fort Hood to train with either the 120th Infantry Division or the 166th Aviation Regiment, who are responsible for the training and validation of the mobilizing units. Tate explained that the 120th Inf. Div. handles all the ground and support units who mobilize through North Fort Hood, while the 166th Avn. Regt. trains the aviation assets. In fact, Tate said, the 166th Avn. Regt. is the only aviation training brigade for the mobilization of National Guard and Reserve forces, which makes up roughly 51% of Army aviation assets throughout the world.

“It really takes a lot of agility and flexibility for all the Soldiers in the 120th and 166th to be able to put together that type of training,” Tate said. “It’s a huge job and I’m honored to be part of this incredible team.”

After flying into Longhorn Auxiliary Landing Strip, Garrett was greeted by Col. Ronald Ells, commander of the 166th Av. Bde., and his aviation team. Ells explained the brigade’s unique mission and how far they have come as a training brigade since the unit was reactivated two years ago.

Chief Warrant Officer 4 Jerry Spears, the brigade aviation safety officer, briefed the commander on the safety issues they faced upon reactivation and how all of those issues were corrected. He also detailed the past, present and future construction on the small airfield.

Later in the day, the FORSCOM commander was briefed by members of the 120th Inf. Bde., led by its commander, Col. Lance Cangelosi, who explained how the unit works with the National Guard and Reserve units to ensure they are receiving the best training. The brigade remains in contact with the unit downrange, who keeps them informed of any changes to the downrange mission, so the brigade can adjust its training accordingly for the next cycle.

Garrett said the 120th Inf. Bde. and 166th Avn. Bde. both play very important roles in terms of building readiness and preparing units for the Army’s many requirements.

Discussing modernization plans, Garrett said the Army is in an interesting place – modernization takes money, so they will have to make some tough decisions. He explained there are more than 30 signature systems the Army wants to put into service.

“We’ve committed ourselves to modernizing our Army and, for me, it’s not something that’s nice to do, it’s absolutely imperative for our Army,” Garrett told the Soldiers. “It’s gonna take all of us looking at where we’re spending our money and looking at how we can be more efficient with the resources we have.”

Working in tandem with the First Army – Division West is the Hood Mobilization Brigade, which falls under U.S. Army Garrison – Fort Hood. The Hood Mob. Bde. handles all the logistics for the mobilization and demobilization of the Reserve and National Guard units. The unit is also currently in charge of the quarantine process for Soldiers demobilizing from overseas.

Due to a Department of Defense-directed 14-day quarantine period for all unit redeploying from overseas, the normal seven day demobilization period has been extended to 15 days and a wake-up in most cases. Explaining the process to Garrett, Lt. Col. Gregory Escobar, commander of 2nd Squadron, 3rd Cavalry Regiment, said the quarantined Soldiers are able to handle a majority of their demobilization process virtually during quarantine. When the Soldiers are released from quarantine on day 15, they finalize everything and are able to go home the following day. He explained that only Soldiers who need medical appointments, such as knee surgery, would remain longer.

“Thus far, we have had no positive COVID-19 cases,” 1st Lt. Clayton Reed, physician’s assistant, said about the quarantined Soldiers.

Reed explained the quarantined troops are given twice daily temperature readings, which are annotated for record, so the Soldiers can take those records back to their home unit. The Hood Mob. Bde. has also purchased 15 infrared thermometers to help with the temperature readings.

Garrett said the Hood Mob. Bde. did a good job of capturing the best practices. He said he was impressed with how the quarantine process was being handled at Fort Hood and hopes other units will incorporate some of the measures.

“The whole purpose of this is to maintain a sense for how we are adjusting to the current environment. The missions don’t change and we don’t have the luxury of not being ready,” Garrett said. “What we see here is what we see everywhere – we’ve got some very innovative Soldiers and everyone’s learned that if you give a task to a unit as a mission, it gets done right and that’s what we’ve seen here.”