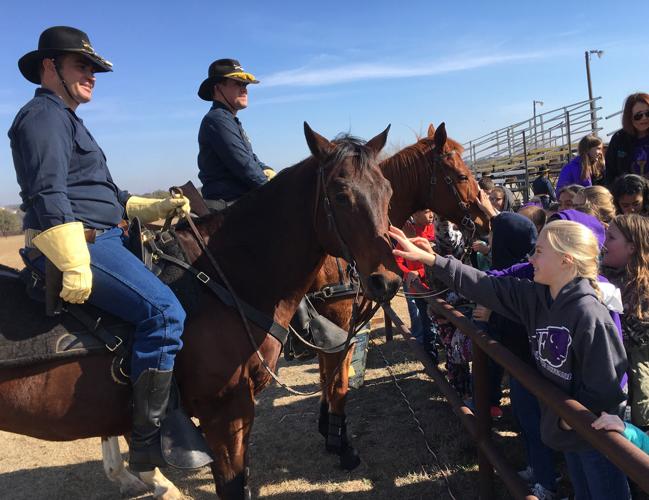 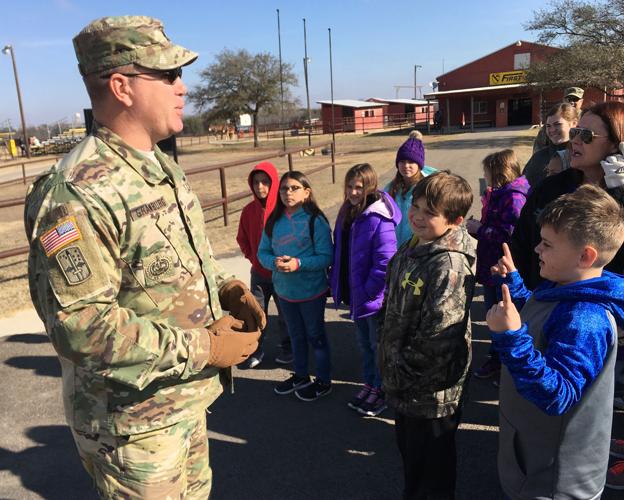 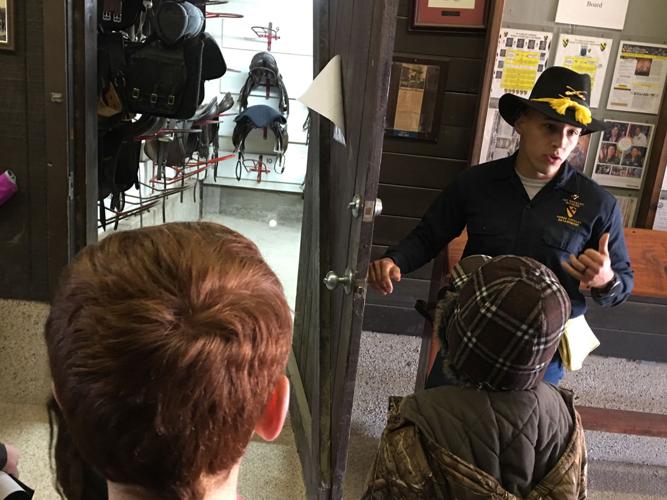 Students from Florence Elementary School hitched up with 1st Cavalry Division Horse Cavalry Detachment troopers on Fort Hood Thursday as a reward for their participation in the Academic University Interscholastic League.

Test officers and NCOs of the U.S. Army Operational Test Command, partnered with the Horse Det. to teach the kids something about the Army’s past under Fort Hood’s Adopt-A-School program.

“The horse platoon visit was for a job-well-done for the kids who competed.”

One USAOTC Test and Evaluation Officer Maj. Mindy Brown, has gone to Florence Elementary in the past, to help with long division and multi-step multiplication problems.

“Interacting with the children at the Cavalry Horse Detachment, it was really awesome to see their faces,” she said.

“I have three young kids myself,” Brown added. “So I see the impact when other people give back to the school, and I wish I was one of those moms who could be at the school with my kids and to have that kind of impact.

Florence Elementary Counselor Julie Parker, said she is grateful to the Soldiers for taking the time to show the stables to the 2nd- through 5th-grade students.

“The troopers are extremely knowledgeable about the stables and everything that goes into taking care of the horses,” Parker said.

“The horses were a huge hit,” she added. ”The kids had a lot of good questions, and they look up to the Soldiers and they all want to work with them.”

Grawburg recalled a time when a San Antonio police officer gave his daughter a sticker.

“Just a simple little police badge sticker,” he said. “Ever since then, she’s actually talked about wanting to be a police officer.

“It’s the little interaction that you never think about that can mean the world to some of these kids,” he added. “It can have a profound impact on their lives. You just never know.”

At the tour’s end, the cavalry troopers gave each child a keepsake “HOT TO TROT” poster to remember their day, and the kids asked the Soldiers for their autographs.

“When it was time to go home, the kids were all like, ‘Already?!’” Parker said. “They didn’t want to leave.”

The 1st Cav. Div. Horse Cav. Det. troopers conduct demonstrations that are open to the public every Thursday at 10 a.m., depending on weather and mission requirements. Call ahead at 287-2229 to check the Horse Cav. Det.’s schedule.